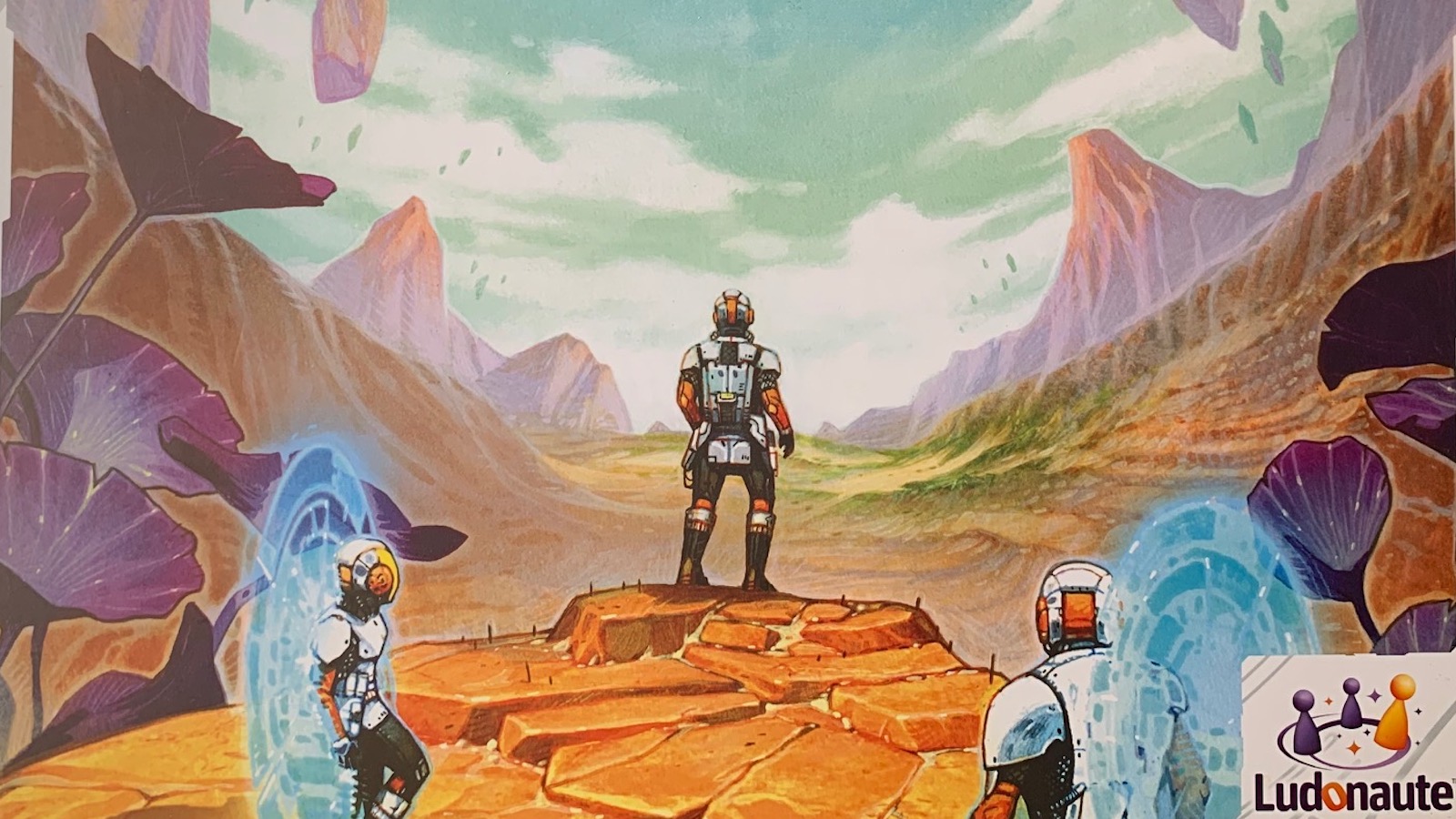 Well, we’ve finally done it; Earth is all but uninhabitable. Luckily we found a set of 6 planets all ripe for colonization. We’ll have to warp through space gates to get there, but let’s send people there ASAP.

Space Gate Odyssey is a competitive worker placement/engine builder game for 2-4 people designed Cedric Lefebvre, and Vincent Dutrait, and publishted by Ludonaute. In it, everyone is building their own space stations in order to send colonists to 6 exoplanets. The player who sends the most colonists in the most efficient way wins the game. 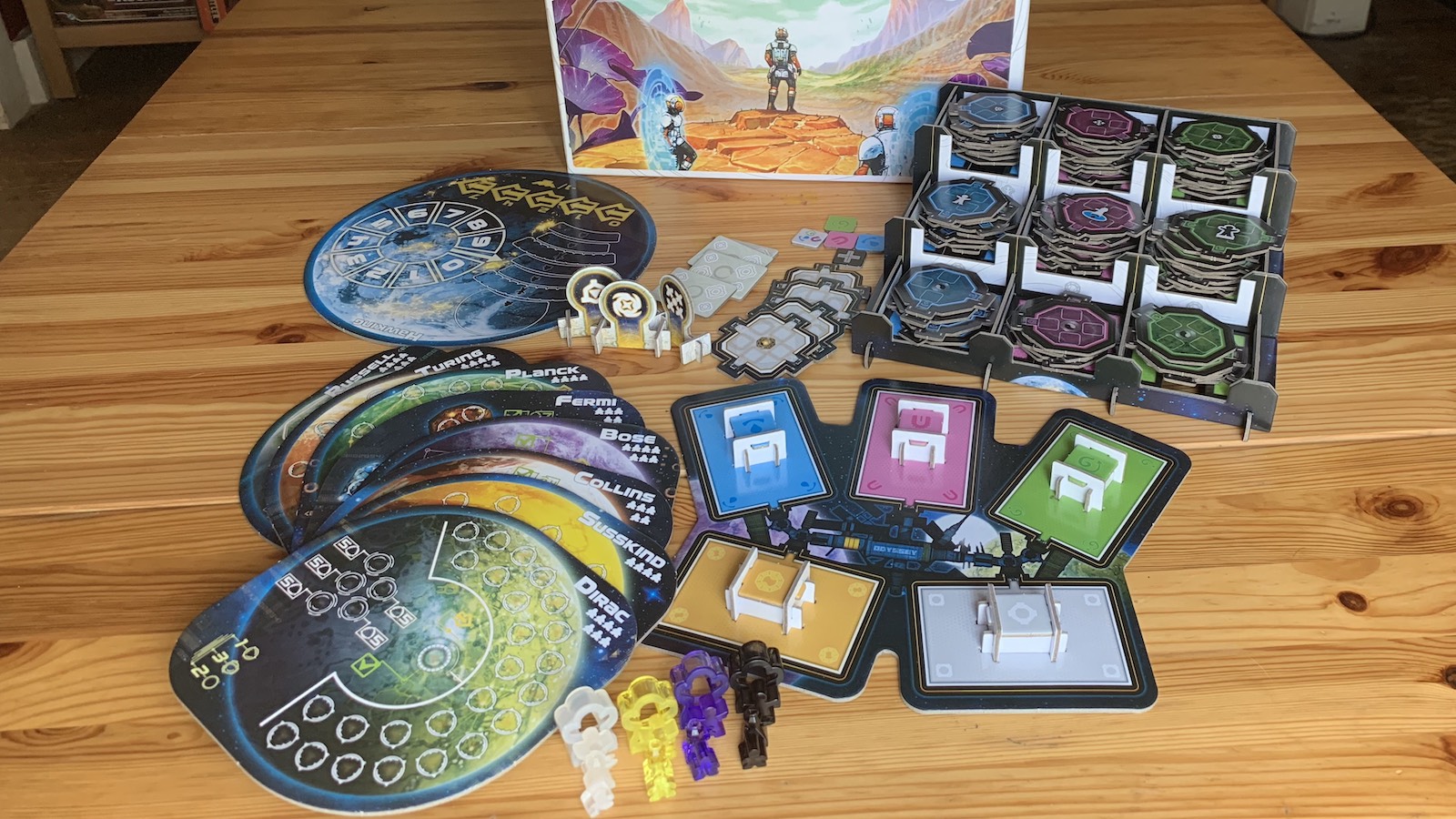 There is a lot of cardboard to unpack in this game. There are 85 small modules used to build the space stations, with a three-tiered worksite that holds them, an odyssey board with action stands, one large planet “Hawking” that is for all intents and purposes, a score tracker, and 8 planets ready for colonization. 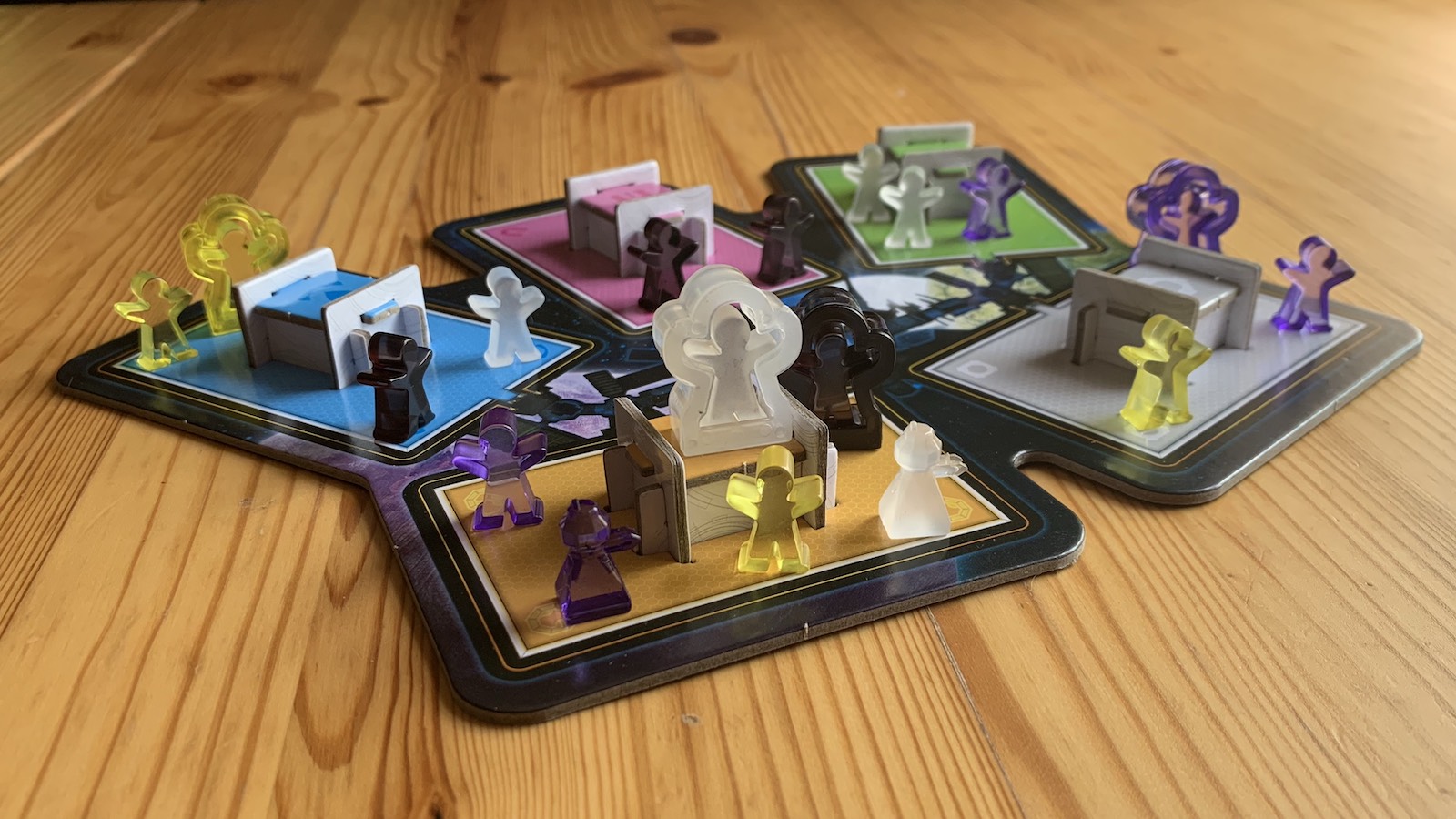 Now focus shifts to the Odyssey board, which consists of 5 colored rooms (blue, pink, green, gold, and grey). Each player places one of their engineer pieces in each of the blue, pink, and green spaces, then one chief engineer (an Engineer placed inside a Chief Engineer Suit) in the grey room. The gold room starts the game empty. On a player’s turn, they are allowed to move one engineer to an action stand in a room they aren’t currently in, and then take the corresponding action. How many times you get to take that action that turn depends on how many of your Engineers, Robots, and Chief Engineers are in the room being activated. Engineers and Robots each give you one action, and each Chief Engineer gives you two.

The grey room is called the New Modules room. When activated, everyone in it gets to take as many new modules from the Worksite as they have actions. Each player can only take from the top of each pile once per activation, and if they don’t like the look of that top tile, they can use that action to pull the top module off of the stack, and place it underneath the others. These tiles are now placed in the player’s space station off side up. The corridors on the edge of the modules must connect with corridors on the existing modules. The modules come in three types and three colors. The Airlock modules introduce new settlers to the player’s space station, Odyssey modules provide additional Engineers, Chief Engineers, or Robots to the Odyssey board, and the Space Gate modules transport the Settlers to the exoplanets.

The gold room is the Airlock room. When activated, players get to fill any airlock module they have with as many settlers as that room has room for. Airlocks are one of the three types of modules that a player can add to their station, and once they’re operational they have room for 2-5 settlers to enter the player’s space station. Once again, the more actions the player gets from this room, the more airlocks they can fill. 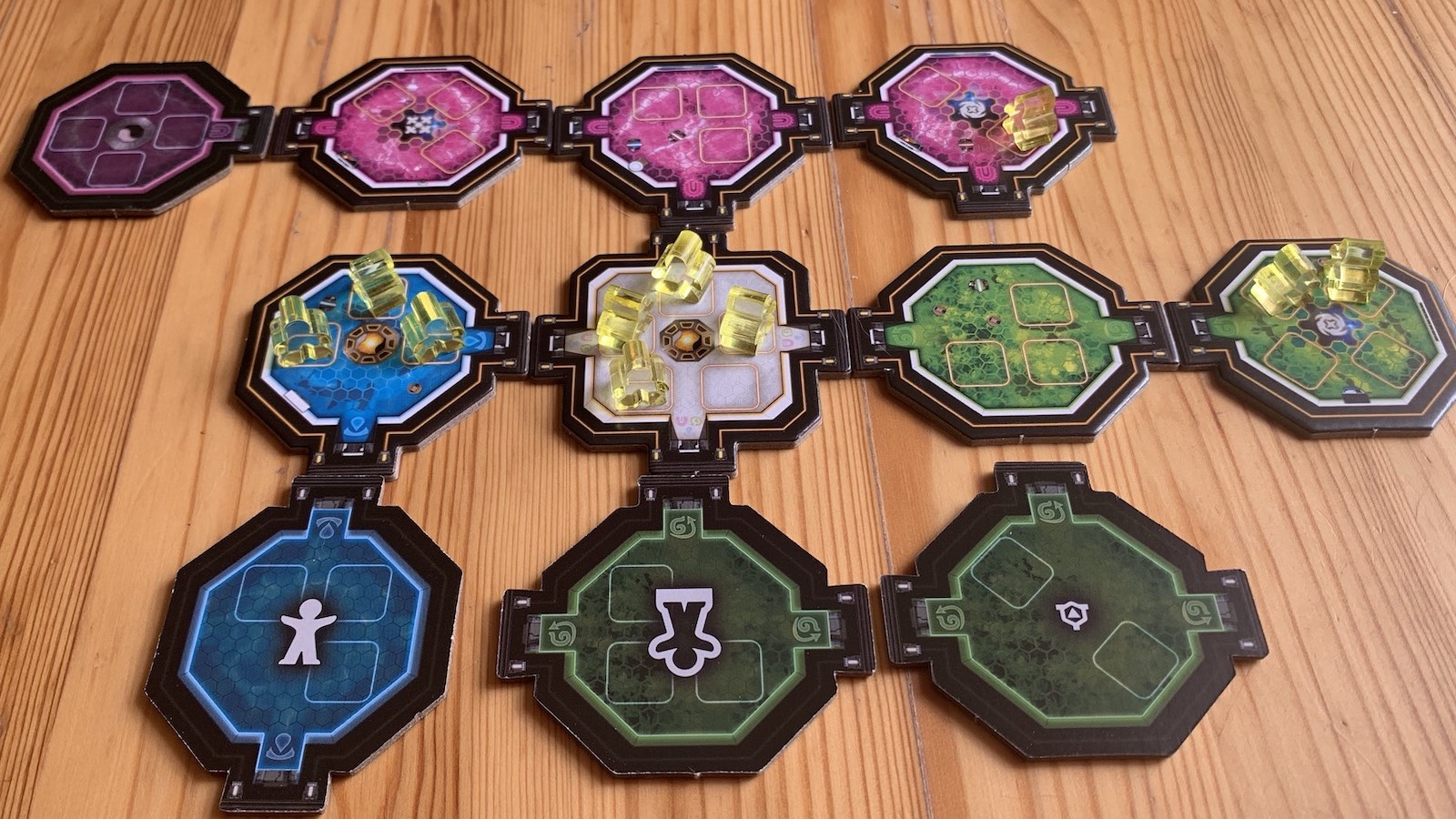 The Blue, Pink, and Green rooms, called the Water, Energy, and Wildlife rooms respectively, all serve the same function, movement through the space stations. When these rooms are activated, each action gives the player one movement in their space station, but only into the modules of the same color of the room activated. The starting white module is considered wild. So, no matter what color module the Settler starts its movement on, it must only be moved to modules whose colors match the activated room. Movement is very important, because each new module added is placed face down or “off”. To turn the module on, and activate its functions, one must first send a settler to that module. Once this happens, that settler is lost and returned to the player’s reserve pieces. Once turned on, the Airlock modules are ready to fill, the Odyssey Modules provide the extra pieces on the Odyssey board, and the space gate rooms are ready to send Settlers to planets!

At the end of each movement, any player who has filled all the spaces in any Space Gate module sends all of them to the planet with the same space gate shown by the icon in the middle of the module. 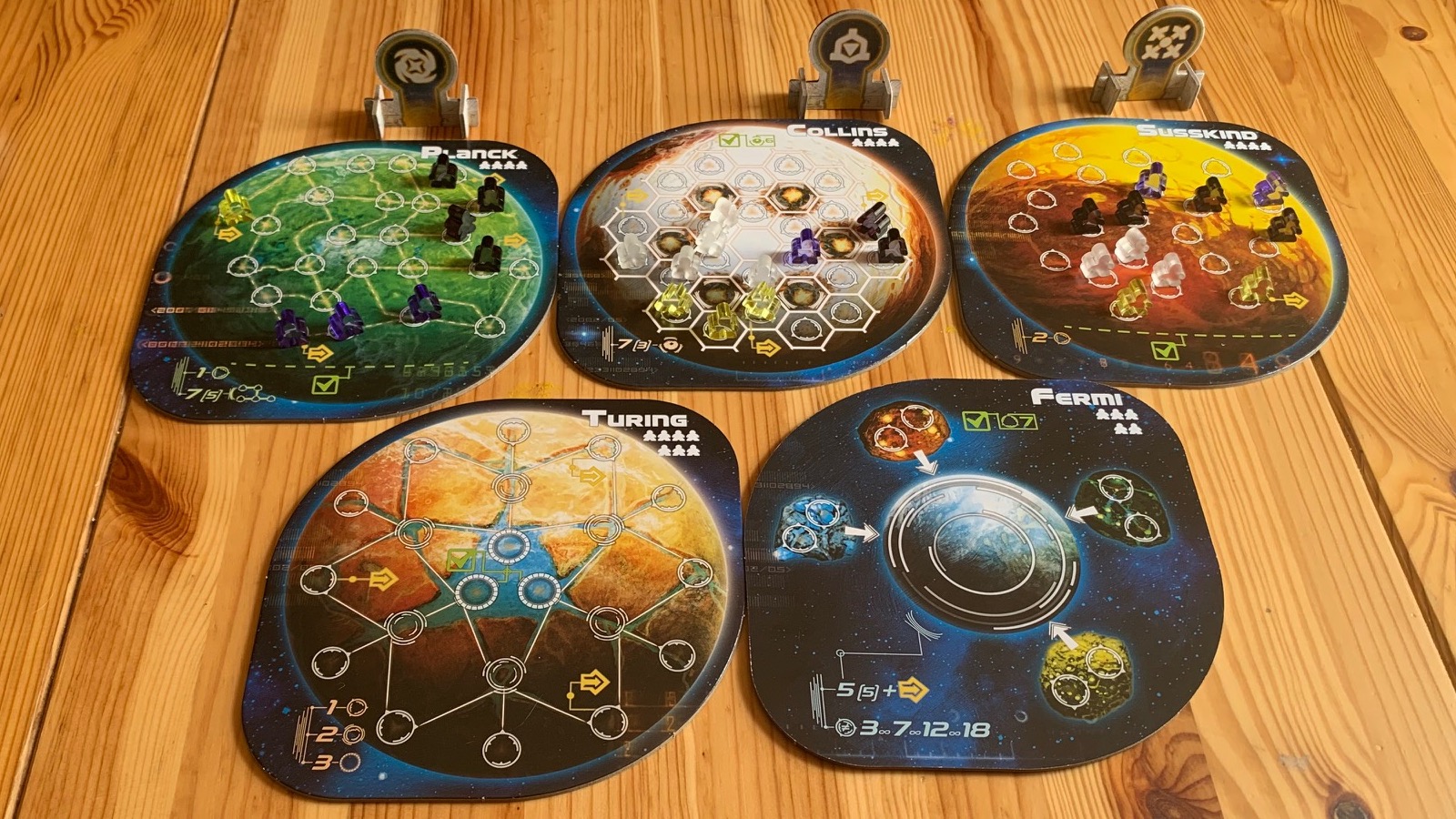 There are 8 of these planets, but each game is only played with 5 picked randomly. Each planet has prerequisites for colonization, and different ways to to get the most points out of doing so. There are only 3 space gates though, so that’s how many planets are open to colonize at any time. To access all three, players must add at least one module for each gate to their space station. Once a planet is colonized, players retrieve their Settlers on it, and follow the planet specific rules for scoring. The space gate on that planet then moves to one of the 2 that have yet to be accessed. After that, the gates are sent to “Hawking”. Once all five planets have been colonized, and all three gates sent to Hawking, the game ends. 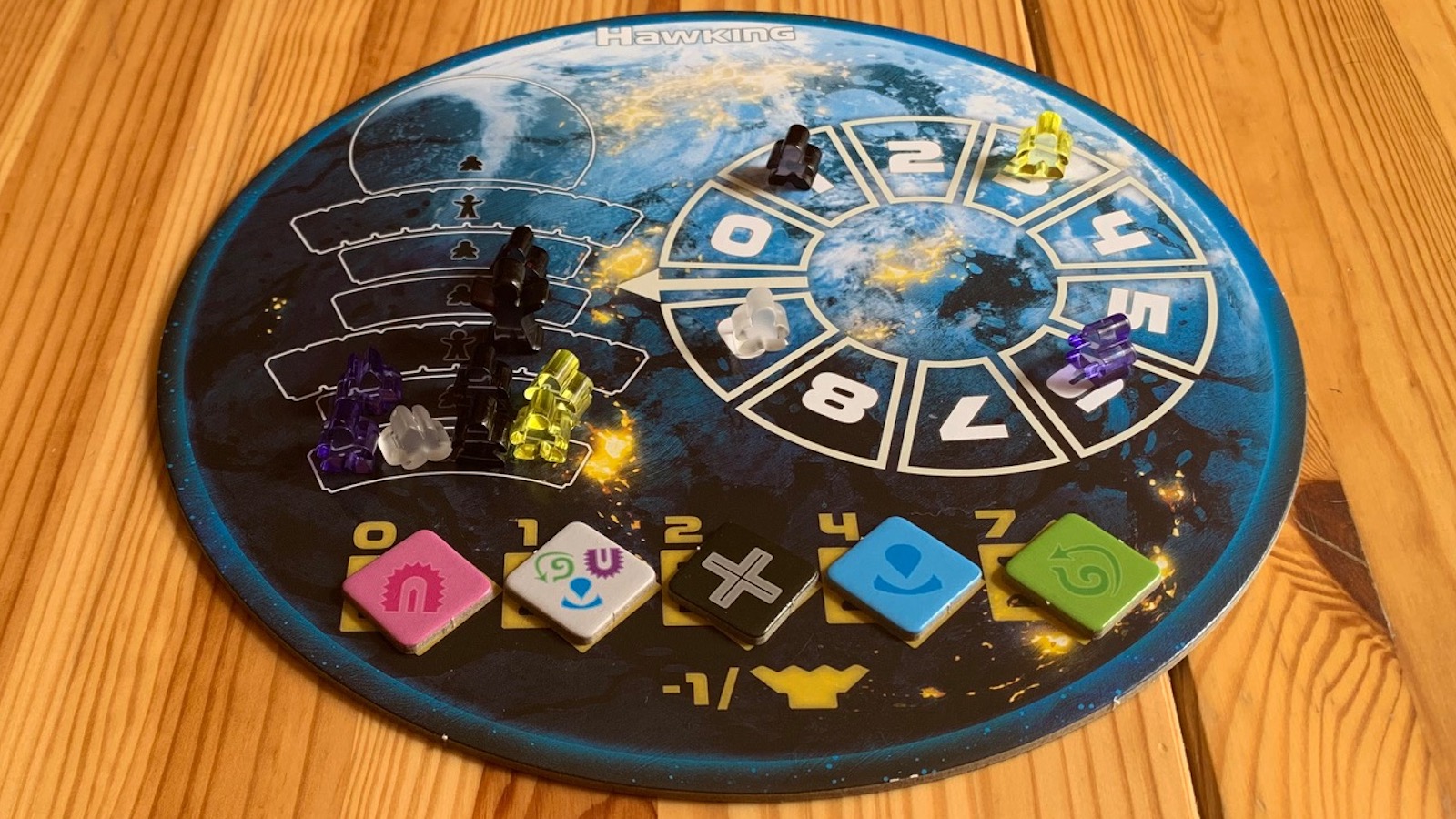 Scoring is all tracked on the 6th larger planet “Hawking”. Each player has a Settler piece on a wheel there numbered 0-9. Every point given to that player moves their Settler one space on that wheel. Every time that movement goes from 9 back to 0, another settler piece from the reserves, or Engineer piece from the Odyssey board is added to the lowest of the 7 Government Rank spots that doesn’t currently have a piece from that player. The highest ranking player at the end of the game wins.

On the bottom of Hawking, there are 5 tiles. 3 of them have the color and symbols of the 3 rooms used for movement, one with all three symbols, and a black tile with an “X” on it. They are all in places marked 0, 1, 2, 4, and 7. These tiles show how end game scoring works. Whoever has the most modules in each color gets the points depicted in the spot the tile is in at the end of the game. The person with the most sets of all three tiles scores that spot. The black X tile scores nothing. On each exoplanet are spaces that allow players to switch two adjacent tiles to make them worth more or less at the end of the game. So if someone had the most green modules, they would want to get the green tile in that 7 point spot if at all possible. There are several of these spots on most planets, so it behooves players to send their Settlers to these spots first.

Lastly, if any corridors in a player’s space station are left open and not connected to another module, the player loses 1 point for each. Adding and subtracting points at the end of the game may cause their marker to pass that 0 to 9 spot. If so, ranks are gained or lost at the very end.

All of this looks and sounds very complicated at first glance, but I found that the idea clicks very quickly, and people learn the game fairly easy. The hardest part is designing your Space Station well. You want your Airlocks and Space Gate modules as close together as possible in order to get as many Settlers as you can out to colonize faster than your opponents. The Odyssey modules help you get more actions, but once they provide the extra piece, they’re now a worthless room that if placed poorly makes it one more spot you must move through to get to a gate. The designers acknowledge this specific learning difficulty, and how an inexperienced player could place modules so poorly that their game is all but ruined. For this reason, they provide a Reorganization Token for first timers. It’s a one time mulligan allowing for complete reorganization of your modules. This is pretty unheard of in tabletop games, and a lovely consideration for the fun of all involved. All but one of the people I played this game with used this tile on their first game.

The game design is for the most part simple and aesthetically pleasing. The art of the box and the exoplanets are beautiful. I didn’t love the plastic components though. The colors don’t vary enough; the purple and black sets look almost identical in many cases, and have to be picked up and inspected to know which belongs to who. The Settler pieces are teeny tiny, and easily lost (I count them at the beginning of every game just in case), but I get that you need so many of them to play (36 per player) that this was a necessity when thinking of table space. I understand that things like this cost a lot of money to produce, but it would be nice if there were indents in the modules to hold your Settlers. One big bump of the table, and those little guys would be everywhere, and it would be hard to reset. 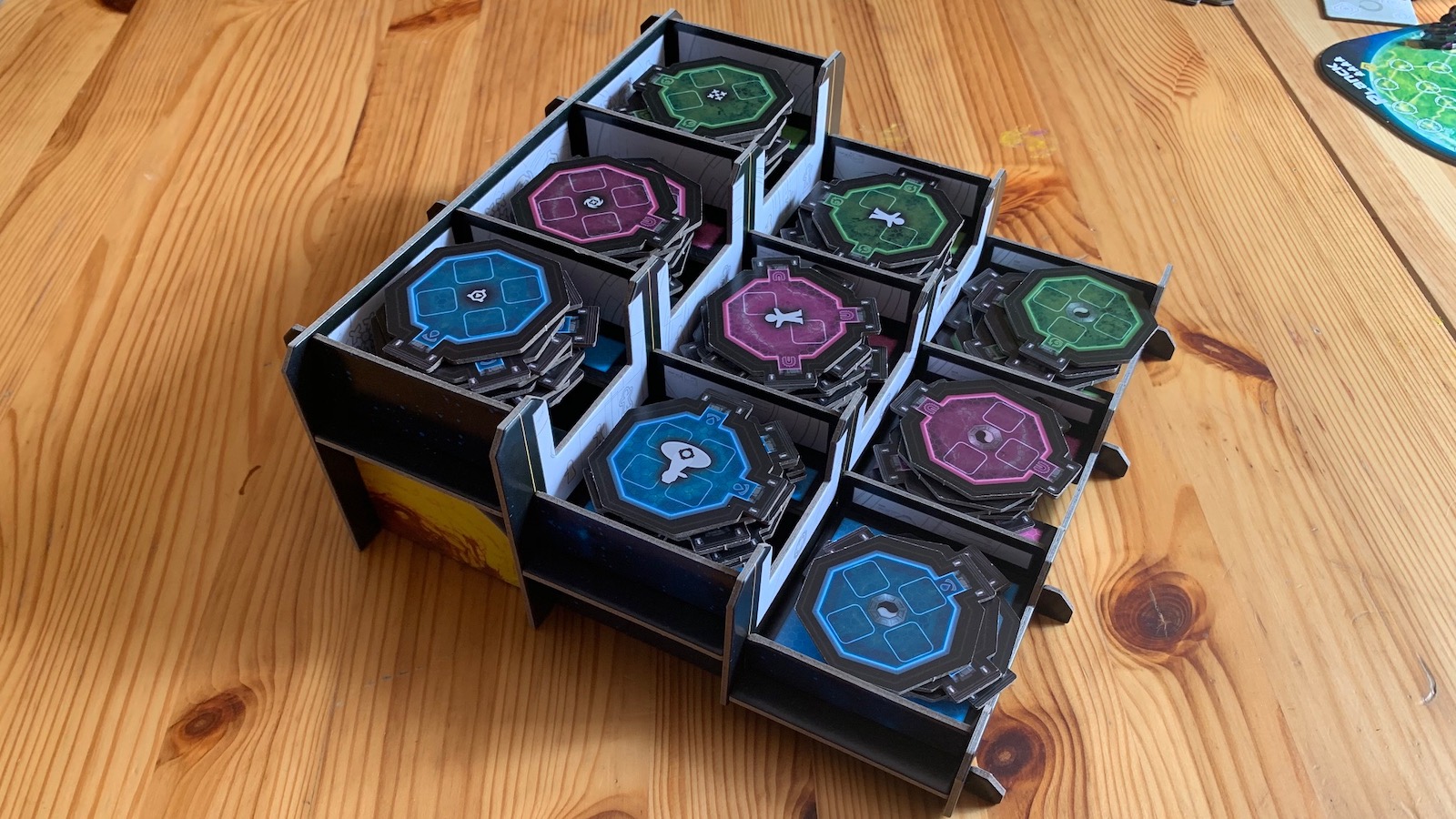 The Worksite stand that holds the unused modules is huge. It takes a while to put together, and really doesn’t add anything necessary to the game. Sure, it’s nice that they help you organize this game with so many different pieces, but the three leveled rack doesn’t fit back in the box unless you trash the insert that comes with it. Even then, it’s a challenge to repack the game, and the lid often doesn’t fully close.

My only other gripe is with the directions. In a two player game, we reached the top of the rank chain every time, and the rules were unclear as to what to do in this situation. I had to go online to forums and ask other people. It turns out that the top rank can hold as many settlers as you earn, unlike all the ranks before which hold one from each player. Not a bad mechanic once you understand it, but confusing at first. The rest of the instructions were clear, and easy to learn.

Other than that, I really liked this game. There are so many things to think about with each move, and many paths to success. Changing the planets every time keeps the game from getting stale, and thinking about the end game makes module and settler placement challenging and fun. It’s a game you really have to think about, and that kind of stimulation is exactly what makes me bring it back to the table again and again. The fact that every turn taken gives all players at the board actions that involve players throughout, and there is very little time spent waiting on other players to take their turn.

This game plays well, and is a new unexpected favorite from Ludonaute, whom I hadn’t heard of before receiving it. They did such a good job, I’m personally going to keep an eye Ludonate to see what they have in store for us next.

Space Gate Odyssey seems like a beast of a game to learn, but players will take to it quickly, and enjoy colonizing these new worlds. The amount of cardboard is cumbersome, and sometimes unnecessary, but it doesn’t get in the way of a really fun game.

Nick Cvercko is a 37 year old fella from Flagstaff Arizona that lives with his wife and pets in Austin TX. You can find him at Lamberts Downtown BBQ mixing up all the tasty drinks. He may be a little too in to board games.
Related Articles: Space Gate Odyssey, Tabletop
Share
Tweet
Share
Submit