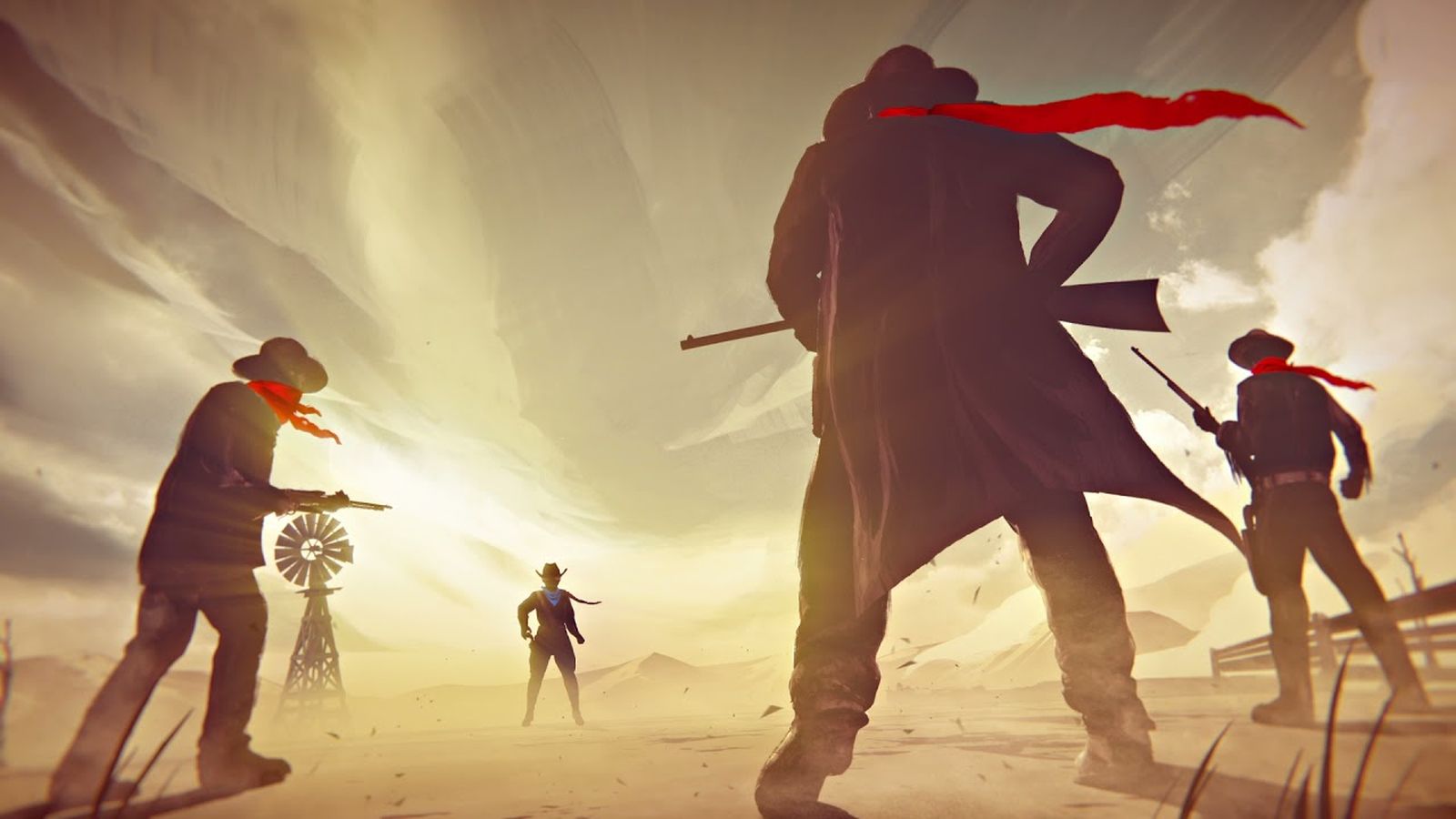 Pistol Whip is many things, but you won’t catch it standing still. Twice developer Cloudhead Games has upended their already-successful formula with something entirely different that shakes things up and makes it all fresh again. This newest expansion, Smoke & Thunder, gives us a rootin’ tootin’ six shooter fantasy of the Wild West. In fact, it’s kinda Will Smith’s Wild Wild West but with far better music, sans Kenneth Branagh, but still featuring electro-shotguns, shields, and other craziness. It’s that kind of loopy, and I’m absolutely all in for it. 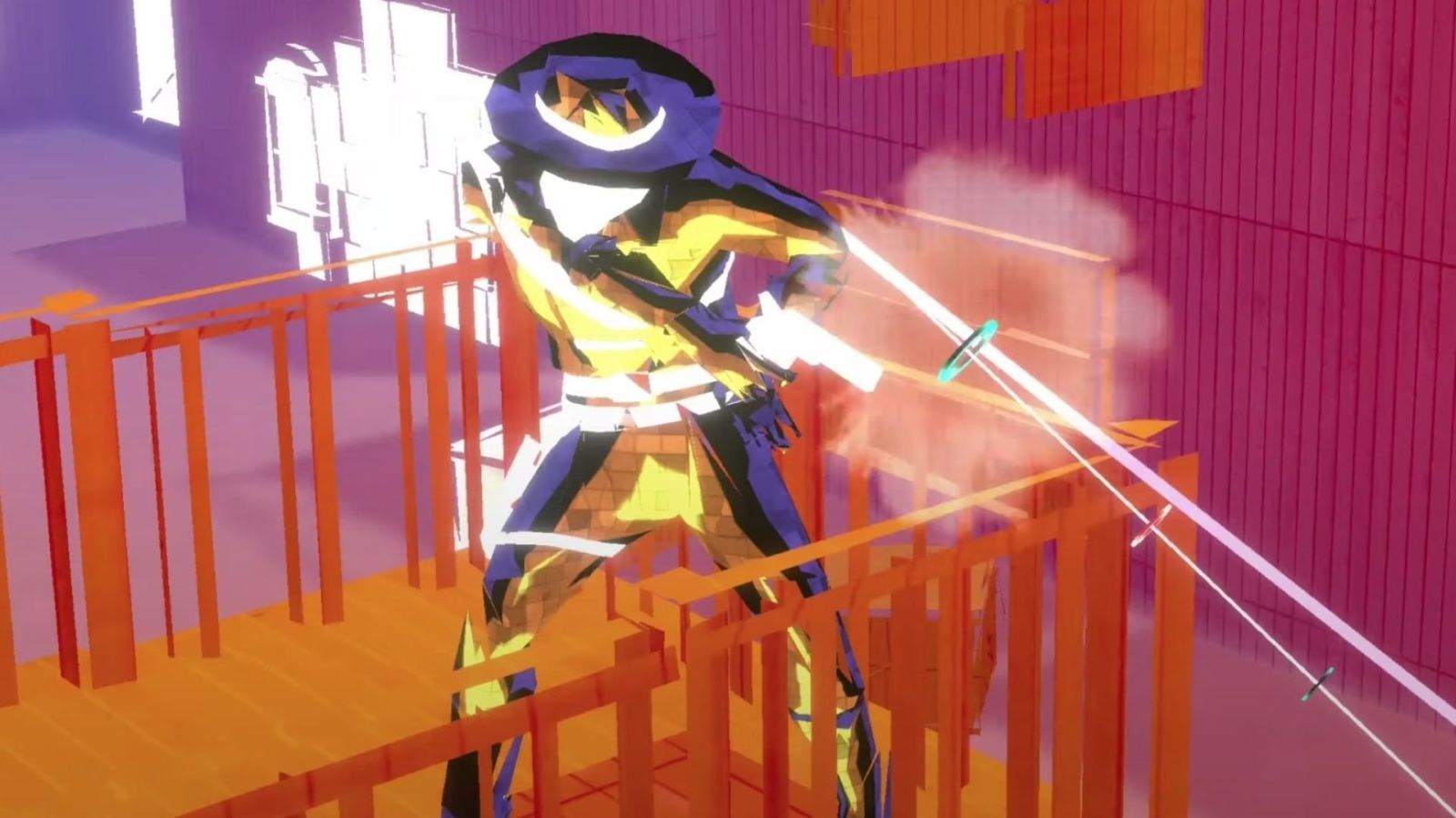 While Pistol Whip has always had a dual pistol option available, with Smoke & Thunder it’s baked right into the campaign. You play as a female protagonist in search of her sister in the wild west. Cinematic and stylized story cutscenes play between each of the five missions in the game, culminating in an epic boss battle. Music from artists like The Heavy, DEVORA, Blast Pistol Fire, Bones UK, and Magic Sword join the already fantastic soundtrack — something you can explore if you simply toggle details while looking at a scene from the main menu.

Selecting campaign, just like you did in their previous cyberpunk-themed expansion 2089, you’ll embark on your journey. Completing the campaign missions lets you select them later as part of the arcade mode. As before, there are three difficulty levels to choose from, but rookies beware — this one will have you moving, so limber up! 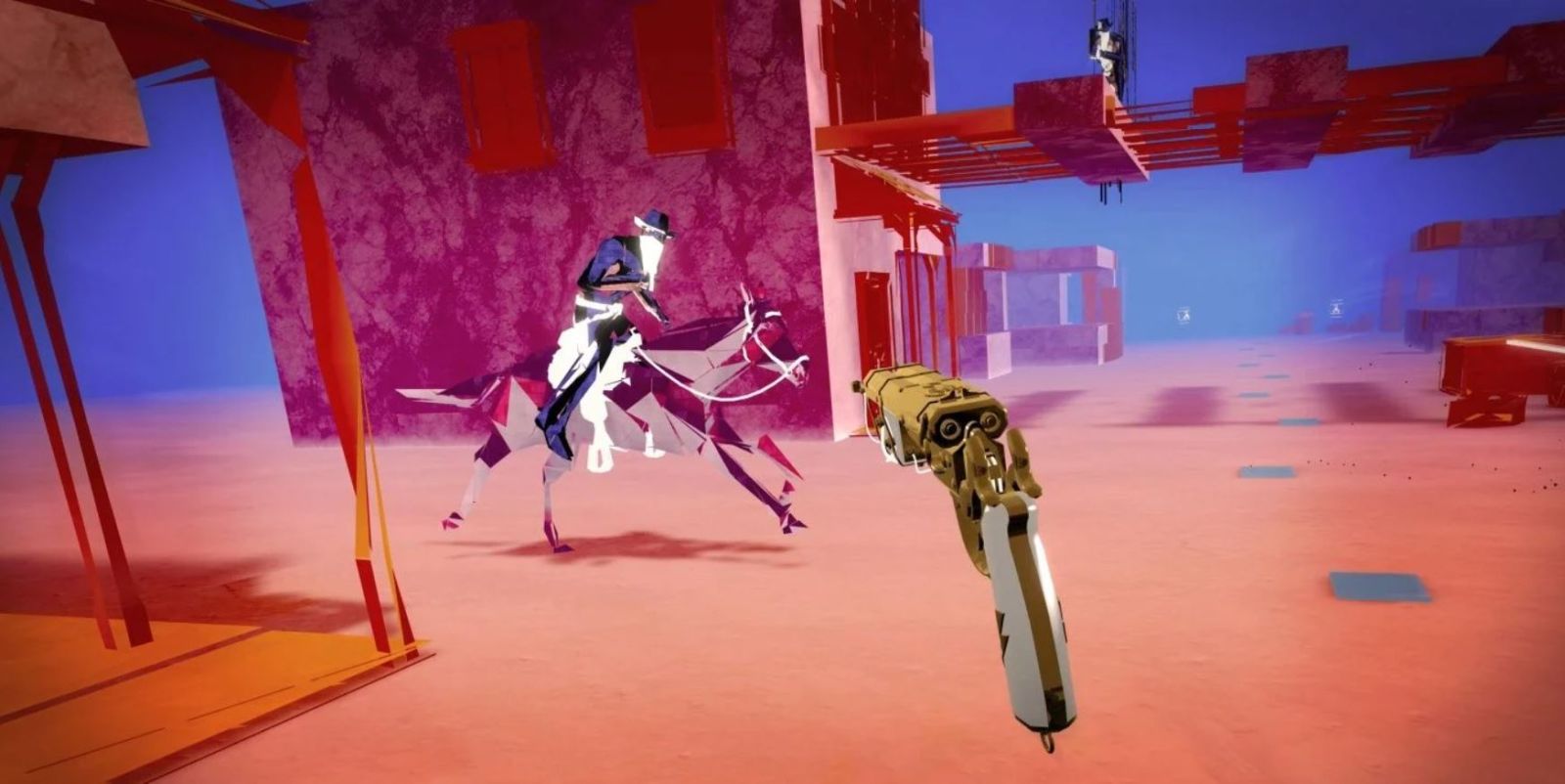 Instead of just fighting off cop-like dudes with body armor, you’ll square off against cowboy-hat wearing badasses that occasionally…well, they have body armor too. Still, popping off their cowboy hats with a well-placed headshot will net you points, and doing it to the beat will net you more. Practice makes perfect, and will also make you damned sweaty. If you were looking for a VR game that’ll get your blood pumping, take a break from Box VR and give this one a try.

The fully-voiced cutscenes (with a few lines thrown into the scenes themselves for good measure) are all well-acted, and equally as well-animated, with a well-inked comic book style. While the campaign won’t take you longer than an afternoon to complete, it’s one thing to beat it, and something entirely different to do it well. Mastery of these missions, plus the additional difficulty options, will take far, far longer.

Beyond the campaign, there are a number of fresh goodies for this most recent update. The new Styles system is a free update that shipped alongside the DLC for Smoke & Thunder, bringing with it a whole lot of new ways to play. With more than a dozen modifiers, and a half dozen weapon types to keep things interesting, Styles allow you to customize your experience. You can even resort to fisticuffs exclusively if you are feeling particularly brave. Some of these modifiers add additional challenge, and some just make it completely crazy, like a big-head mode. The team says there are over a million combinations, and hitting the random button seems to back that up as I have never gotten the exact same thing twice. All of these lead to the new leaderboard system where you can challenge your friends to try to take on your score. As each modifier has its own score tracking, it pushes players to try new things. 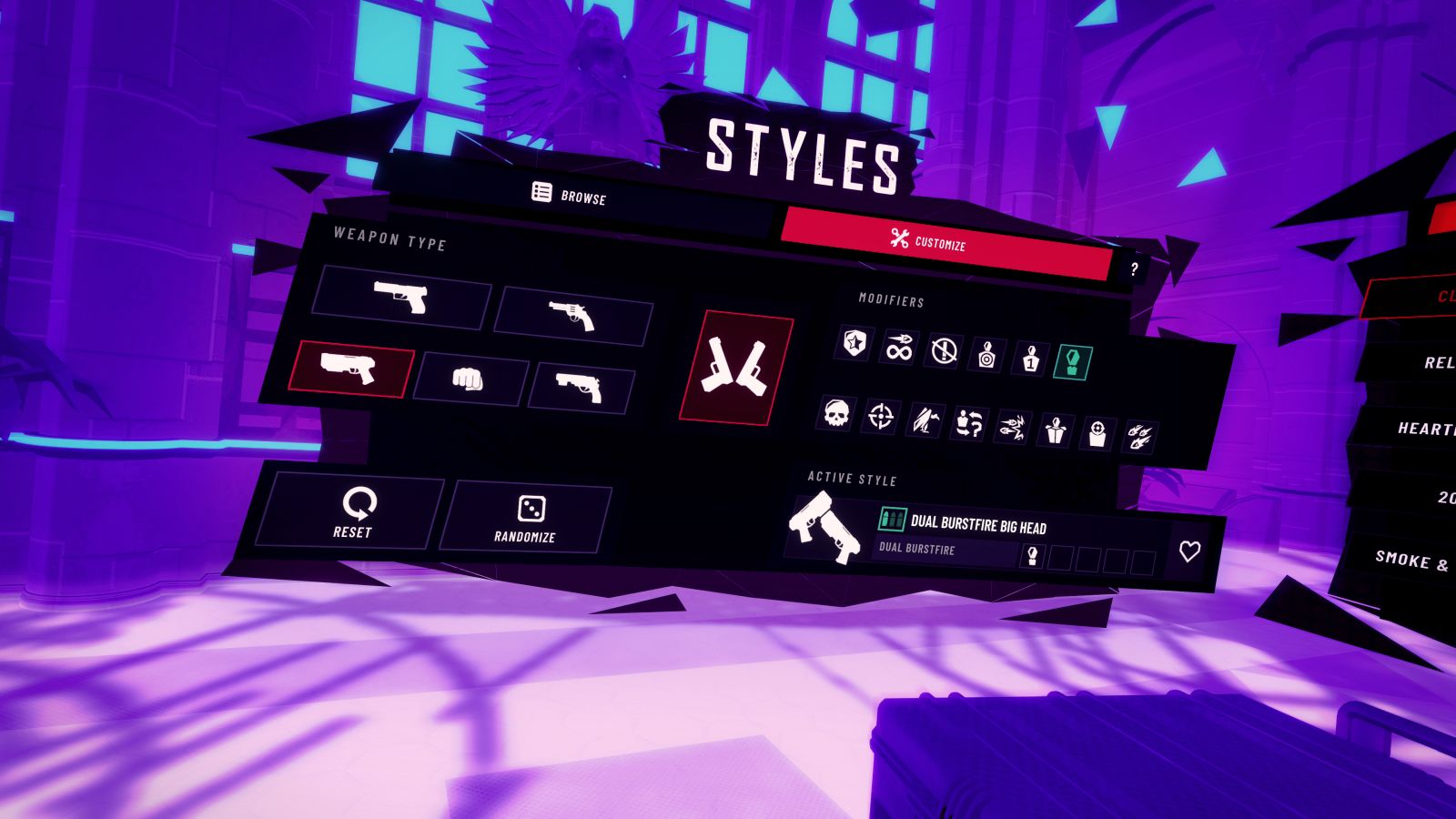 When the game launched there were 10 scenes to play, but the Smoke & Thunder expansion brings that number up to 28, each with their own theme and music to keep it fresh. If you were expecting country music with Smoke & Thunder, think again — these are more pop tunes with a solid beat. It fits clearly with the already-stellar soundtrack — see for yourself over on Spotify.  I would normally show you video of me playing, but the fine folks at the RIAA would have none of that, I’m sure. 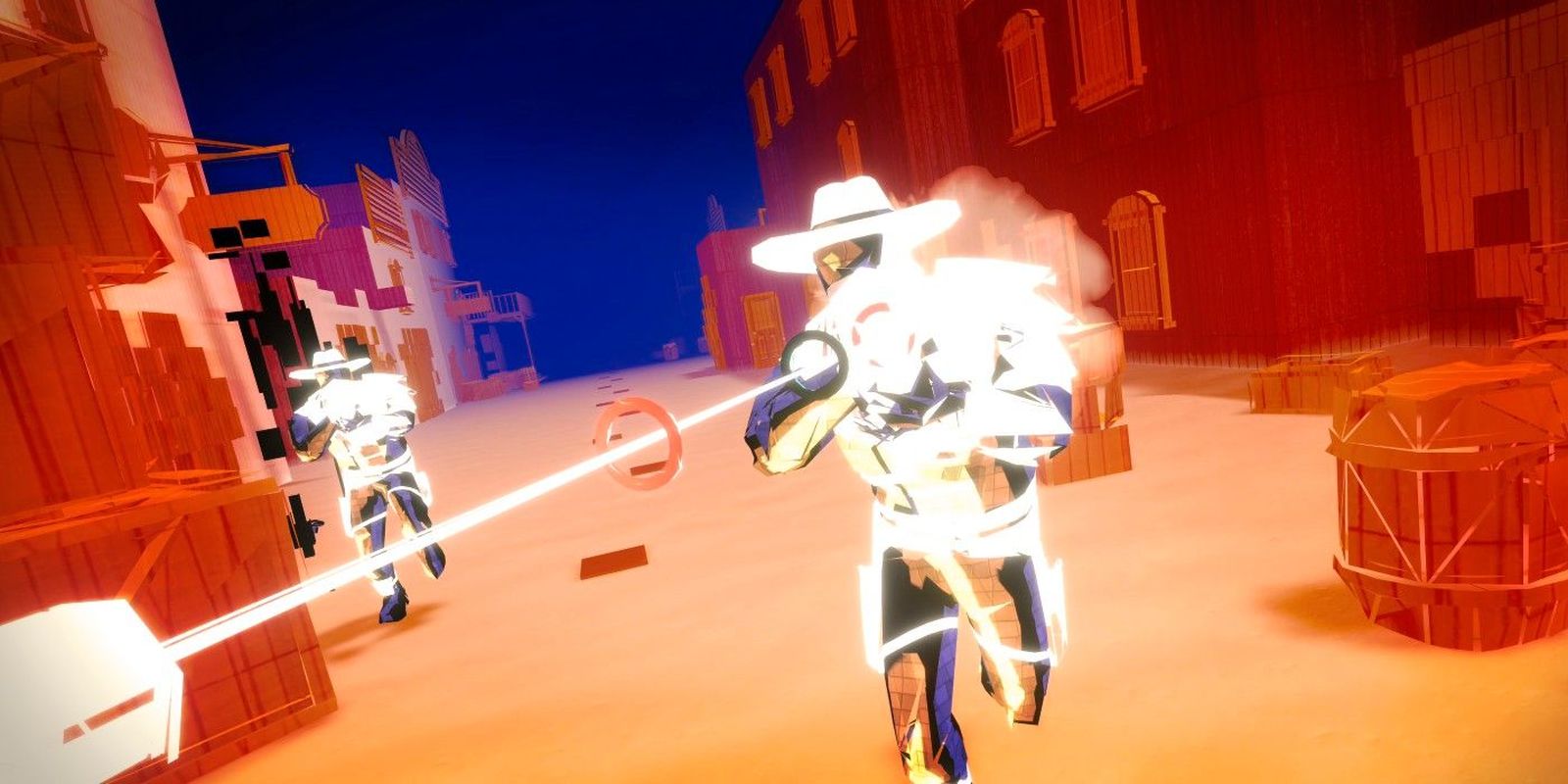 Since Smoke & Thunder is built around dual-wielding, you will be snapping off shots with your trusty six-shooters most of the time. Eventually you’ll get a new weapon, however — the Boomstick. Tech-modified, these electro-shotguns unleash splash damage on your foes, making some of those grouped shots easier to nail. Still, these only have two shots each, and your six-shooters (as the name suggests) only have six rounds, so figuring out your timing is all the more critical.

Already a fantastic game for any player, from VR novice to enthusiast alike, Pistol Whip hits its stride with these two expansion packs. 2089 gave us the concept of a mini-campaign, and Smoke & Thunder perfected it. With the new Styles system, there’s a near-unlimited amount of new ways to play. If you’ve not picked it up already, do yourself a favor and snap it up. You won’t regret it, pardner.

With the fresh new campaign, and the brand new Styles system, Smoke & Thunder gives us a ton of new ways to play. The soundtrack now has a whopping 28 tracks and scenes, and is every bit Cloudhead Games at their very best. If you don’t already have Pistol Whip in your library, what are you waiting for? This is what VR is made for!

Ron Burke is the Editor in Chief for Gaming Trend. Currently living in Fort Worth, Texas, Ron is an old-school gamer who enjoys CRPGs, action/adventure, platformers, music games, and has recently gotten into tabletop gaming. Ron is also a fourth degree black belt, with a Master's rank in Matsumura Seito Shōrin-ryū, Moo Duk Kwan Tang Soo Do, Universal Tang Soo Do Alliance, and International Tang Soo Do Federation. He also holds ranks in several other styles in his search to be a well-rounded fighter. Ron has been married to Gaming Trend Editor, Laura Burke, for 21 years. They have three dogs - Pazuzu (Irish Terrier), Atë, and Calliope (both Australian Kelpie/Pit Bull mixes).
Related Articles: Pistol Whip: Smoke & Thunder, VR
Share
Tweet
Share
Submit