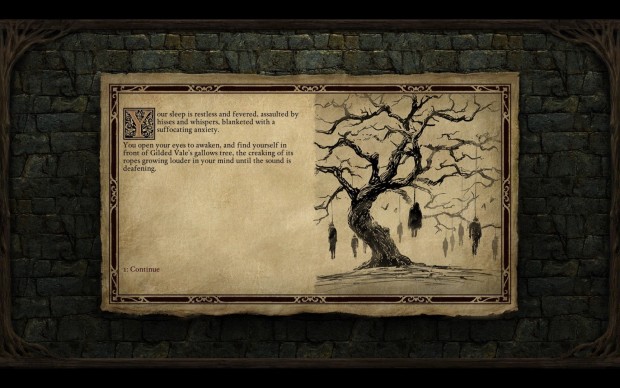 In March of 2012, Obsidian Entertainment was working on a ‘next-generation console game’ that got canceled. Despite their attempts to try to resurrect the game via another publisher, it failed, and they had to start laying off employees. Months passed, they still hadn’t gotten a project to start working on, and they were looking at an ‘end date’ for the company – if they hadn’t obtained a project by then, they were going to just close the company.

Then Kickstarter happened. Or more to be more exact, the Kickstarter for Double Fine’s next adventure game launched, and they pulled in over 3 million dollars.

Their eyes lit up and upon realizing that this would be the perfect time to launch their own Kickstarter,  they got themselves prepared and finally launched it on September 14th, 2012.

Magic crossfire can be absolutely lethal to your party. Friendly fire!

In just over 24 hours, they had pulled in the $1.1 million that they requested to make the game. By the time the 30 days had passed, their final total was just under $4 million, with almost 74,000 backers.

Years later (and about a year late from their original estimates), Pillars of Eternity has finally been released. Is it a good game? Is it a game worth your money and the 40 to 100 hours it’ll take to finish?

Let me just put it this way – this game is being called Baldur’s Gate 3 by some. That alone should say something, for those people who had played those amazing Infinity Engine games back in the day.

But for those who had never played Baldur’s Gate, Icewind Dale, or Planescape Torment in the late 90s and early 2000s (barring the semi recent rereleases of the Baldur’s Gate titles) what is it like?

Pillars of Eternity (shortened to Eternity from here on out) is a party based (your character plus five others out of eight total NPCs with their own stories and wishes, or you can create your own ‘mindless’ team to journey through the world with) real time (with speed up, slow down, and pause functions) RPG, with a long, detailed story, that takes your character from a relative nobody into someone who is just slightly more important by the end of your adventure.

For your character, you pick one of 11 classes, 6 different races, and then allocate points between your six main attributes and five skills. And before you think anything is a ‘dump stat’, you’ll quickly realize that unlike games of old, there really is no such thing here.

In Eternity, you’ll find that having high attributes (or just about anything) is useful not only in gameplay itself, but in conversations as well. As an example, you come across a person early on who offers a giant list of ways to solve the problem he’s causing. You can use your high Might stat to try to bully him. Your Resolve stat to try to shout him down. Your Athletics skill to try to run over faster than he can react. Your Intellect stat to completely outsmart him. Or, if you have none of those, you can try to deal with him via more mundane methods.

And the entire game is designed this way. Your choices (including your prior ones hours and hours ago) all matter. Eternity even keeps a ‘living journal’ that details all the major events that happened to you, along with how you solved them.

Visually, Eternity looks fantastic. The entire game has a ‘painted over’ look that gives it a unique visual. Like the Infinity Engine games before it, it looks absolutely beautiful scrolled out. Environments and towns look alive, well lived in, and just there on your screen. Zoom in and you can see the character models close up (although the backgrounds don’t hold up at that close of a zoom). Monsters are varied, threatening, and fully capable of biting your head off. Spells are equally as impressive, and look as destructive as they should be. It’ll all combine into a visual flair that’ll make you want to zoom in to see the carnage you’re causing up close.

In the audio department, some great fantasy sounding tunes will be heard through your speakers of choice. Whether it’s a quiet ditty as you explore around town, or a fast-beat track as you combat an enemy boss, it all just works to keep your adventure from being silent. They aren’t really long tracks in general either – they’ll pop up from time to time to remind you that yes, they’re still there.

You don’t want “Killed by a wood beetle” on your tombstone.

You’ll hear plenty of sound effects and voices as well as you play. Monsters have their own individual noises they make, and you can even hear enemy footsteps as you sneak around in the near darkness, helping you try to figure out if you’ll run into your opponents as you round the corner. Unlike much more expensive games however, Eternity is not fully voiced. That’s not to say it’s silent though – all the main NPCs tend to have a lot of well done voice work for them.

So how does Eternity play? First off, it’s not easy. Normal difficulty (there’s one difficulty easier than that, two harder, a slew of options and overlays turn on and off if you choose, and an option for an Ironman mode where you get one save and if you die it gets deleted) will challenge even Infinity Engine veterans until they learn how to play…which in short is to play smarter, not harder.

Tactics is the word of the day here. You want your heaviest tank holding down multiple foes (and since you become Engaged once you move next to an opponent, it’s relatively easy to do), either via getting in their way as they approach, or using cover or even a convenient doorway to keep the oncoming hordes from overwhelming your team and flattening your less than melee capable teammates.

Once you’ve accomplished that, you can let everyone else in on the fight. Ranged weapons can be deadly in the right hands, and spells offer you much, much more than just straight up damage – there’s 16 different types of debuffs, ranging from Prone to Paralyzed to Stuck to Charmed to Blinded. This is in addition to all the special abilities certain classes have. Druids can Shapeshift. Barbarians can Rage. Chanters can Chant (sort of Bardic music in a way). In short, combat is never a boring affair. Just mindlessly charging into the fight, swords and spells blasting away without thought, is an excellent way to get yourself grievously injured or killed via friendly fire.

Outside of combat you’ll have to decide the fate of many via either conversations or little ‘choose your own adventure like’ snippets of story. Unlike say, some other RPGs you might have played in the past, your available responses aren’t just Good/Evil/Jackass. Instead, you’ll be faced with many shades of gray. There is never a correct answer, a good answer, or an evil answer. Just the answer that you, the person roleplaying the character, think is the best choice. Just choose with care – word spreads of your actions, and anything you say and do can and will come back to haunt you hours later.

Over the course of Eternity, you’ll come across 8 possible party members scattered around the world. They cover most of the game’s classes, all have their own story to tell, and do an excellent job fleshing out the game world as a whole as some of them come from distant lands that you wouldn’t visit otherwise. And just like in previous Infinity Engine games, they have their own personalities too. While you can’t romance any of them, they do comment upon what they see happen in front of them during conversations, positive or not.

So overall, Pillars of Eternity is an absolute blast and a game I very highly recommend you should drop everything right now and play if you’re even remotely into RPGs, especially if you remember Baldur’s Gate and the like…

…except for all the bugs it currently has. Obsidian is known for its great and (sometimes very) buggy games at launch. Sadly, Eternity is one of those titles. Give the game a few weeks to get patched up and then drop everything and give it the run (if not multiple) it so very well deserves.

Obsidian's Pillars of Eternity is a love letter to those gamers who remember RPGs of old - when parties were large, adventures were world-sprawling, and you read a book or two worth of words before the world was saved.