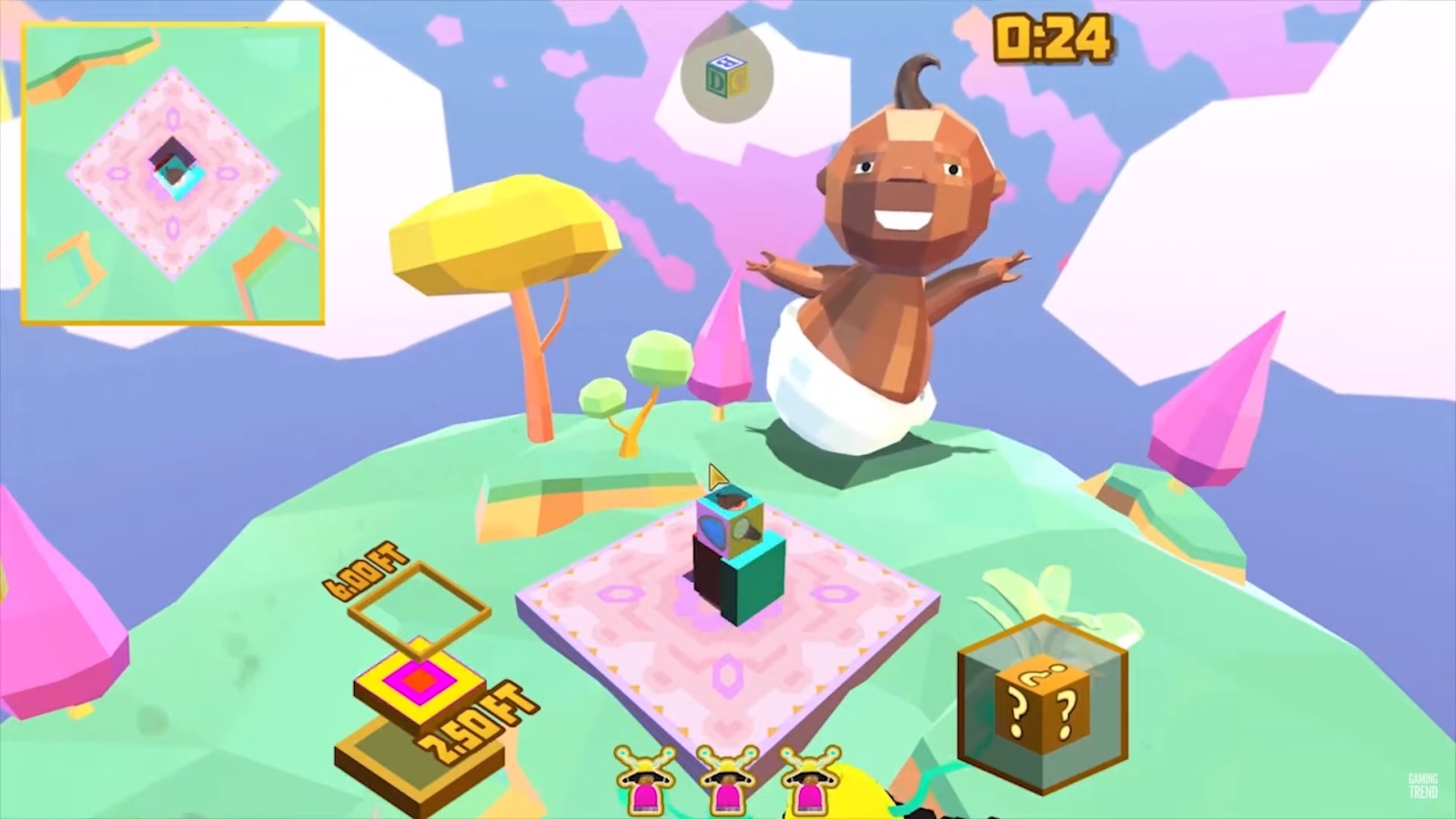 There are few games as old, simple, and fun as block stacking. Equal parts physical skill and strategy, games like Jenga are a staple of family games. Stacks On Stacks (On Stacks) looks to take that to the videogame world, offering up block stacking gameplay in a physics-based world. Let’s stack some blocks and see how developer Herringbone Games is shaking things up.

Stacks On Stacks (On Stacks) (let’s just call it “Stacks” from here on) casts you as Rockit, a psychic block stacker who uses her powers to stack blocks to solve problems for her town. People in her town consist of a sentient bagel as Mayor, snakes, bananas, a robot, an avocado (with pit, pencil mustache, and beret), a t-shirt, rainbow, and a bird, just to start. Yeah, it’s that kind of wacky.

The concept of Stacks is simple — you are essentially tasked with stacking blocks of all sizes to meet a specific height requirement without toppling any over onto the grass outside of the play space. Like Tetris in 3D, various shapes and sizes drop from the sky, and you have to place them in such a way that they safely land and stay stacked for a short count. That’s all well and good until the giant fish wearing the Army PASGT helmet shows up and starts dropping entire fish tanks into your play space. You can’t stack blocks on water, so you might need to set those on the edge of your stacking deck until Sgt. Fish goes away and you can resume your normal block stacking. Babies spinning blocks at you, magnets shifting your field of play, more fish tanks, scales to balance, unstable springs — the chaos this game throws at you with a smile keeps things interesting. Sometimes the game flips the script and asks you to pack blocks into a space, but also asks that you keep below a certain height. Other times it asks you to block seeds from growing into tall plants by blocking them or squishing them with your blocks. Even the Illuminati show up on occasion — Stacks has it all. 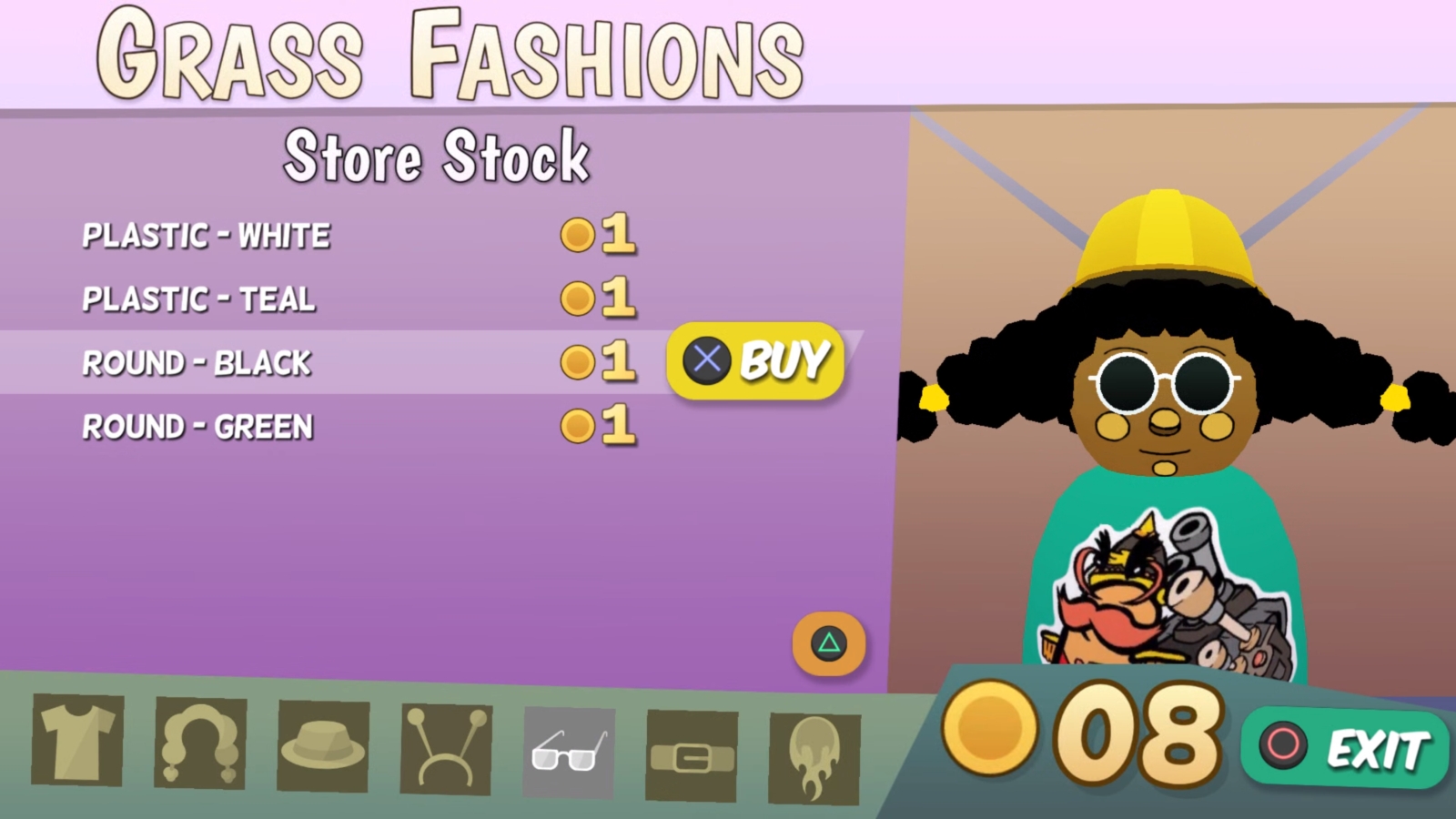 You spend your coins on fashion!

Where Stacks shines most is when the game stops being nice about the blocks it gives you. Stacking tiny squares on large squares isn’t overly difficult, but figuring out how to balance them on top of a rounded piece, cylinders, cones, 17th Century Baroque paintings, music notes, or even trying to stack a tall tower on top of quicksand. These events are often triggered by a block with various images on it. Whatever image lands face up yields the calamity associated with that symbol. It turns out that a city “built on rock and roll” has unsafe foundations, especially when dragons start dropping fireballs on it. Dealing with all of that when your surface is angled makes it even more crazy. Watch how fast your orderly block stacking turns into an episode of Block Hoarders.

Each of the 36 levels has its own unique challenges. Sometimes it’s the block types, sometimes it’s loony “visitors” to your game. The biggest challenge is when your play pad is so small that you don’t have space to ‘dump’ any blocks you don’t want to use. No matter the challenge, the team at Herringbone Games have all but removed the penalty of loss as a “game over” simply lets you try again. To this end, there is a gameshow block icon that asks the player trivia questions — they’ve even allowed you to play with kid questions or adult questions as is appropriate. This works to keep players young and old engaged without stacking frustration on top of frustration.

Beyond the story you can team up with a partner to try to complete the levels with help. Not unlike other “cooperative” games, this can create more chaos than it solves, but it makes it fun. You can also square off in a versus mode with split-screen. Competition certainly pushes you to take more risks and make more reckless drops, which leads to lots of “OHH NOOOO!!” moments. It’s a lot of fun, for sure.

Finishing levels earns you stars and coins (you’ll earn more coins by doing it quickly) that you can spend at the Fashion boutiques dotting the map. These let you buy new shirts, hair styles, antenna for your head, hats, glasses, belts, and even what sort of propulsion smoke comes out of your character. (I hear you laughing…stop it! Mine are cool skulls as you can see below) It’s entirely optional, but provides a collectible reason to repeat levels.

Saving the best for last, there is a lovely buttercream icing on this cake that I enjoyed FAR more than I expected. Once you’ve beaten the baby, slain the dragon, dodged the ghosts, and stacked your highest stack, you get to destroy it all. Upon level completion, a wrecking ball descends under your control, and you get the pleasure of wrecking your lofty tower to bits. It’s cathartic after you struggle through a level to blast through it, wiping the slate clean for the next challenge. 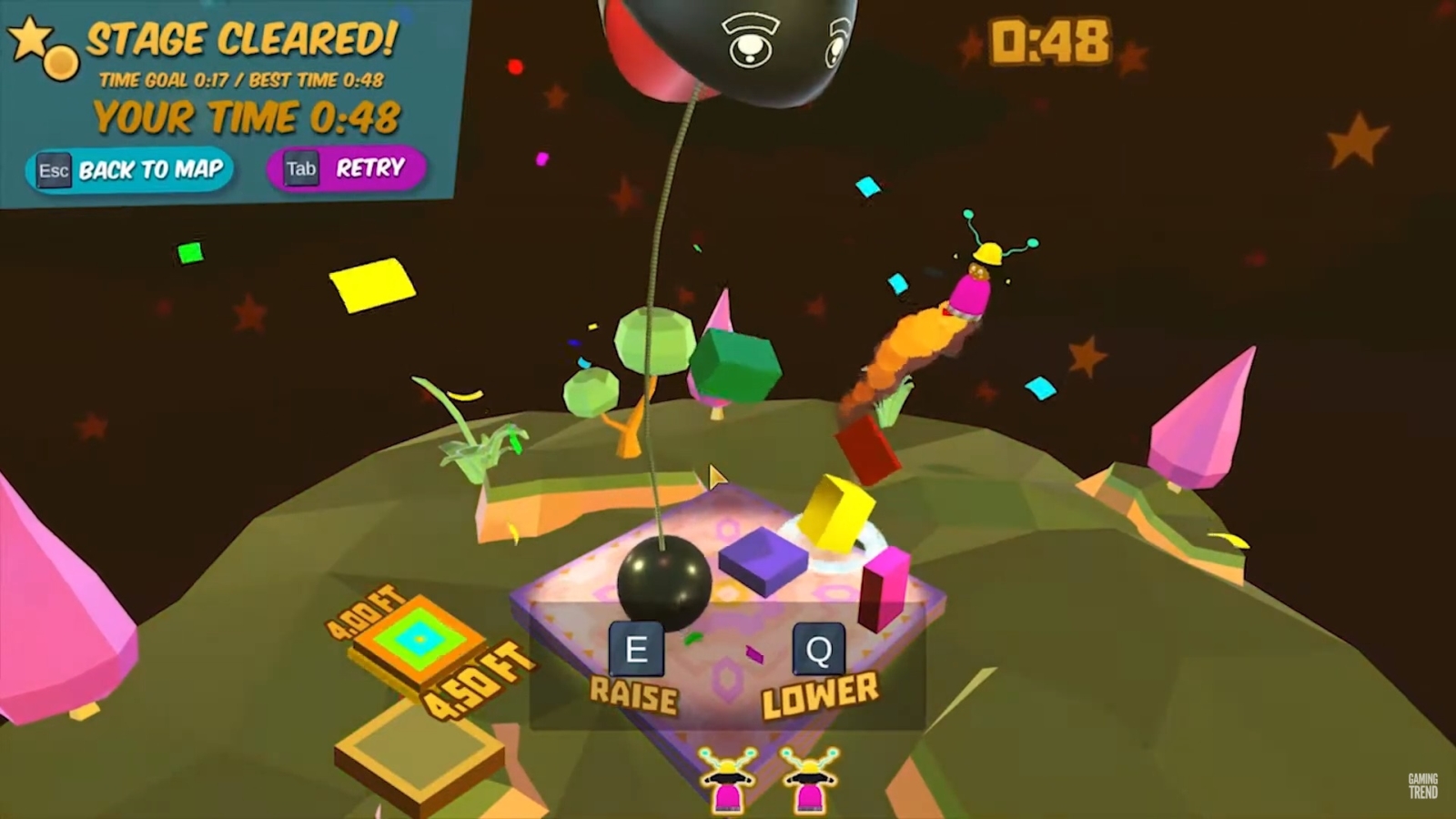 If I had one complaint for Stacks on Stacks (On Stacks), it’s the quicksand levels. You see the intersection between the randomness of the blocks and the challenge of the level intersect at a far higher difficulty level than previous ones. Most levels can be beaten in 3-5 minutes if you’ve got decent controller skills. The quicksand levels took me upwards of half of an hour to complete, and I’m certain that it was pure random luck that I got it. In a sea of fun and interesting levels, I could see that one being played least by kids and adults alike.

Performance on the Stadia, both on the unit itself, and streaming to a browser, worked perfectly. The game loads in a matter of seconds, and I didn’t encounter any sort of issues with the streaming service at any point. Granted, the game is purposely blocky by nature (enjoy that pun — it’s yours to keep), so it’s not pushing a ton of pixels in the first place.

Stacks On Stacks (On Stacks)

Simple in concept, and hilarious in execution, Stacks On Stacks (On Stacks) is a great family friendly block stacker. Nearly every level is a fair, albeit random, challenge that is sure to delight players of all ages.

Ron Burke is the Editor in Chief for Gaming Trend. Currently living in Fort Worth, Texas, Ron is an old-school gamer who enjoys CRPGs, action/adventure, platformers, music games, and has recently gotten into tabletop gaming. Ron is also a fourth degree black belt, with a Master's rank in Matsumura Seito Shōrin-ryū, Moo Duk Kwan Tang Soo Do, Universal Tang Soo Do Alliance, and International Tang Soo Do Federation. He also holds ranks in several other styles in his search to be a well-rounded fighter. Ron has been married to Gaming Trend Editor, Laura Burke, for 21 years. They have three dogs - Pazuzu (Irish Terrier), Atë, and Calliope (both Australian Kelpie/Pit Bull mixes).
Related Articles: Let's Play, Stacks On Stacks (On Stacks)
Share
Tweet
Share
Submit