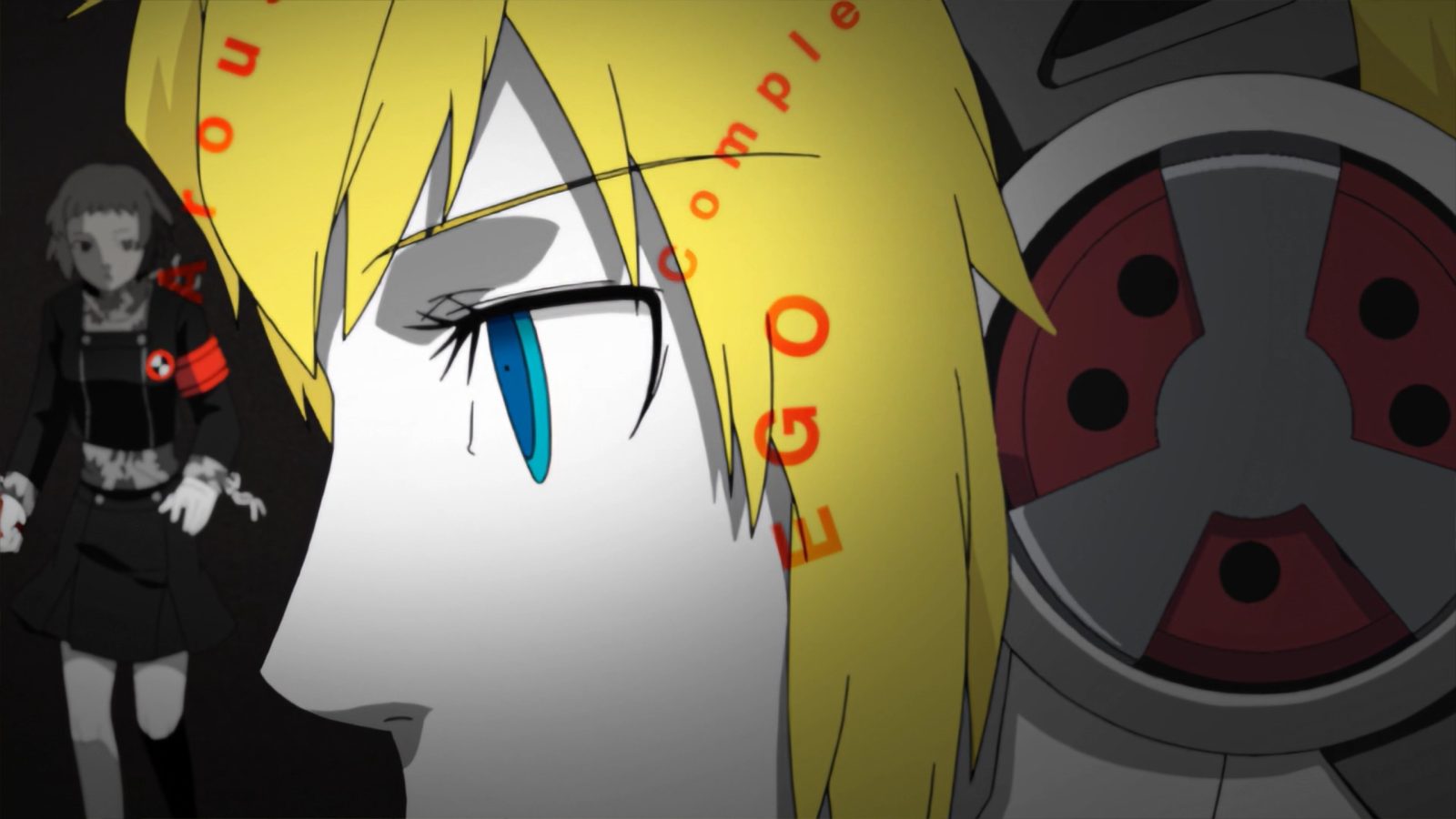 There’s a hidden hour between each day: the Dark Hour. Just as the clock strikes midnight, the city of Tatsumi Port Island freezes, the electricity turns off, the water turns to blood, and the local high school transforms into a gigantic tower filled with monsters called Shadows. While most people turn into coffins during the Dark Hour, a select few are able to enter with the power of Persona. Gekkoukan High has formed the Special Extracurricular Execution Squad (S.E.E.S.) for those with the potential to explore the tower, Tartarus, and put an end to the Dark Hour.

Before we start, a short content warning. Persona 3 contains themes and imagery of death and suicide. Like, basically at all times. So if you’re sensitive to that, come back later, this review will still be here when you’re in a better place.

Persona 3, originally released for the PlayStation 2 in 2006, essentially reinvented the Persona series into what we know and love today. The first three games on the PlayStation, with Persona 2 being a duology, were dungeon-crawling RPGs. They’re great in their own right, with some fantastic characters and mind-Hitler, but P3 added in social and time management mechanics. In short, the player must balance building social stats like academics and charm, making friends, and battling supernatural foes over the course of a year. Social stats allow you to more easily bond with your friends, called Social Links. Leveling up Social Links in turn grants any new Personas you fuse to become stronger so you can fight stronger shadows. That’s the gist of P3, 4, and 5, but P3 has had several versions over the years, with the expanded FES release on PS2 adding an epilogue. Meanwhile, Persona 3 Portable removed 3D exploration and the epilogue but added a female protagonist option with all new Social Links. The latter is the version we’re discussing here, as Atlus has remastered P3P for all platforms including PC.

All cards on the table, Persona 3 Portable was my first and remains my favorite Persona game. I played it at the perfect time in my life, just between middle and high school, and in all honesty, it helped me discover a lot about myself. I also hate The Answer, the epilogue, with a passion, so I’m glad this was the version Atlus chose to remaster.

Starting up a new game, you’re asked if you want your character to be male or female, which has a much bigger effect on the game than you would think. The male protagonist is essentially base Persona 3, while the female counterpart changes quite a lot and, in my opinion, for the better. Both are certainly worth your time, but the female route allows you to actually form Social Links with male party members like Junpei and Akihiko. (The male route feels weirdly afraid of the MC being feminine or, gasp, gay in any way aside from his appearance. It was the 2000’s.) You’ll still get to know them over the course of the story, but I much prefer actually being able to hang out with them and it became the series standard. While in the female route you can choose to remain friends with male characters near the end of their social link, the male character is forced to date every girl to max their social links. In addition, the female protagonist also has access to another Velvet Room attendant, Theo, with his own social link and quests. The female route allows you to choose between Theo and Elizabeth, while the male only has access to Elizabeth. One of the more subtle changes is your character’s personality, dialogue choices for the male will start off more depressing and shy eventually becoming kind and confident as the game progresses. Conversely, the female protagonist begins energetic but reveals her inner sadness as the story becomes darker and darker. It’s an interesting dichotomy, but I consider the female route to be superior so that’s mostly what I played here.

Due to the limitations of the PSP, P3P adopts a visual novel style for navigating the city. You essentially move a cursor around the screen and click to interact with people or objects. While I do miss actually walking around town, this does streamline the experience making it better suited for portable play. Tartarus (and a few other locations) remains fully 3D allowing you to explore each randomly generated floor and battle shadows. 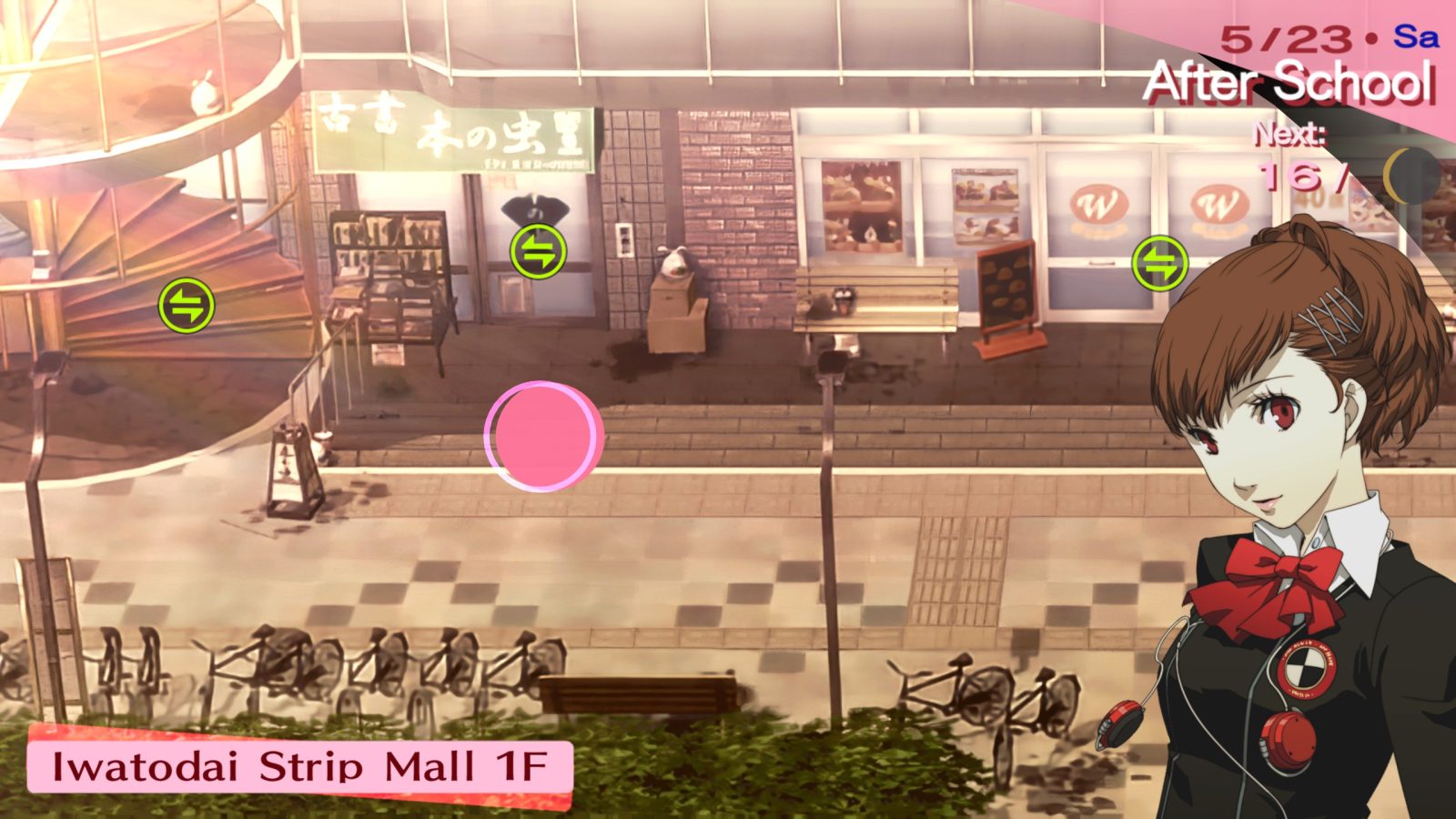 The visuals are somewhat of a mixed bag here, especially in the overworld. The pre-rendered backgrounds remain somewhat blurry, and while the pre-renders of the characters here are much improved they still look kinda ugly. On the other hand, the 3D dungeons and UI look amazing with maxed-out settings on PC, with some very clean texture work and low-poly assets. This is still a remaster of a PSP game after all, so you can’t really expect the quality of Persona 5. Speaking of P5, while this certainly isn’t as stylish as that game the UI is still a standout here and you can see the seeds being planted for what would become P5’s incredible interface. The menus all use nice, solid colors (blue or pink depending on your gender), and it’s a bit more streamlined compared to FES.

As for settings, well, there really isn’t much here given how simple the game is. You have Low, Middle, and High presets as well as the ability to customize shadow and Anisotropic filter quality, toggleable shadows and anti-aliasing, as well as a rending scale based on percentage and a contrast dial. Much like P4 and 5’s PC ports, you can also adjust the resolution based on your monitor’s max, windowed, fullscreen, and borderless modes, and set the fps limit from 30 all the way to 120 in increments of 30. I’m also happy to report that not only does the game support keyboard and mouse with full mouse navigation in menus (you still have to click and drag the overworld cursor around), but you can also fully rebind just about every action for both keyboard and mouse. M&K has a lot more flexibility in this area than a controller, for example, you can’t rebind movement or camera controls, but it’s still a great quality-of-life addition. 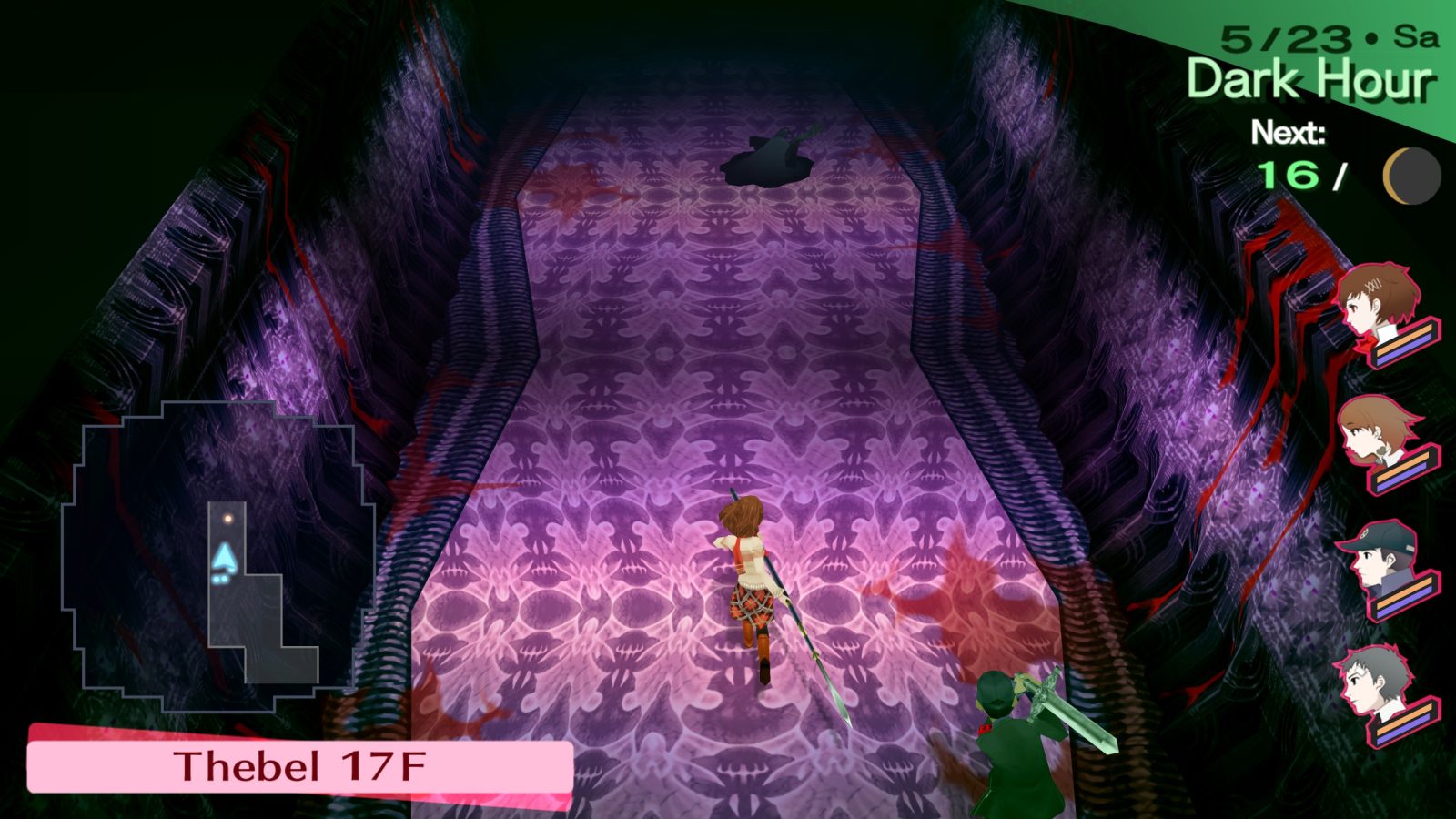 On the flip side, I also had access to both P3 and 4 on Switch, and I’m genuinely torn between the ultra-high resolutions and frame rates of the PC versions and the pop the OLED screen adds to these games. Both games run at a full 60 on Switch with no dips that I could find (I played up to the monorail in P3 Switch and up to Kanji’s dungeon in P4). Steam Deck is also able to reach a full 60 at 720p and 200% scaling, but the game sadly doesn’t support ultrawide resolutions. It’s great being able to hop between PC and Steam Deck as I please, but the OLED really is a game changer here. P3 uses a lot of dark colors and blacks while P4 is much more colorful and just pops like it did way back when on the Vita. You really can’t go wrong with either version, but I’d pick whatever you have an OLED screen on if at all, otherwise PC is more fully featured. If I may be an extremely nitpicky fan for a second, however, the Protagonist F trading card on Steam is discolored – she has black hair and dark brown eyes in the picture. I assume the card was based on her All Out Attack art, which also gives her brown eyes instead of her actual red, but I’m not sure why both are much darker here.

In terms of sound, while the music is fantastic (the two routes feature different songs) the sound effects and some of the voice acting remain heavily compressed. Out of battle, things sound fine but in battle, everything sounds super crunchy. I kind of like it in a way, but it really should have been cleaned up here. P3 and 4 share quite a lot of assets, so there’s little reason for the latter to sound much better than the former. On a more positive note, both the English and Japanese dubs are available from the get-go, with the game defaulting to Japanese. I really enjoy the English acting (except for Fuuka’s extremely weird delivery) but the Japanese is just as good. 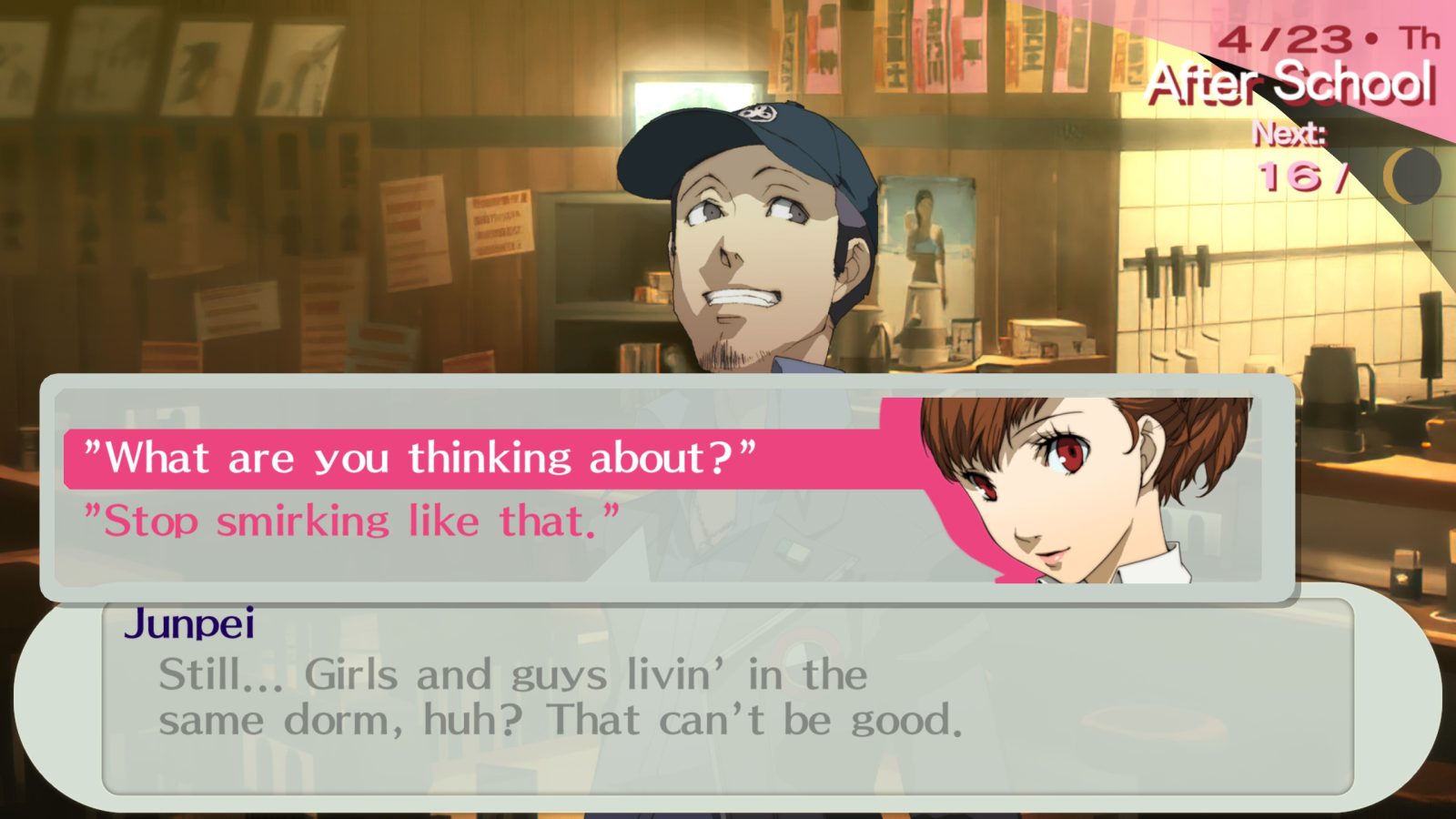 I do think this remaster could have done a lot more to make it the definitive version of Persona 3, like an anime cutscene viewer (there are none aside from the openings), the ability to choose between the male and female social link versions, being able to choose inherited abilities (something SMT Nocturne Remastered added) altering some problematic things like being able to romance Ken (who is a child) or the trans woman in Operation Babe Hunt, having gay romances, I could go on, but there is a reason this is still my favorite Persona game. I may love the P2 cast, Inaba may be cozy, and P5 may have the most style, but Tatsumi Port Island is home. Your party here starts off abrasive and hesitant to open up, but they slowly become your found family over the course of the game. The game explores the theme of death so well that it still resonates with me just as much as it did when I first played it. There’s just something special about P3P, and I love it – flaws and all.

This remaster may be closer to a simple upscale, but Persona 3 Portable is still an incredible game that set the standard for modern Persona. The game looks and runs great no matter what you play it on, with a few caveats. While this probably won’t settle the debate about P3’s definitive version, it’s great to have it easily available.

David is the kind of person to wear his heart on his sleeve. He can find positives in anything, like this is a person who loved Star Fox Zero to death. You’ll see him playing all kinds of games: AAAs, Indies, game jam games, games of all genres, and writing about them! Here. On this website. When not writing or playing games, you can find David making music, games, or enjoying a good book. David’s favorite games include NieR: Automata, Mother 3, and Gravity Rush.
Related Articles: Persona 3 Portable
Share
Tweet
Share
Submit