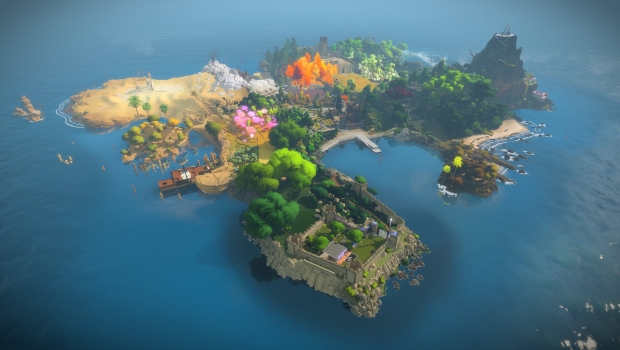 The Witness is a puzzle game for the PlayStation 4 and PC. I start this review in that frank manner, because frankly, knowing too much about Jonathan Blow’s newest title is doing a disservice to yourself. This wonderful title, eight years in the making, has confounded, infuriated, and captivated the staffers of Gaming Trend to no end. To capture our raw feelings, we decided to avoid the common review format, and instead share an exchange of letters between lead editor Eric Van Allen and lead news editor Kenneth Shepard. This, in our opinion, best captures the raw feelings and concepts of The Witness, without bogging it down in arbitrary checklists and rigid expectations.

Oh man, where do I begin? I didn’t expect to like The Witness this much. I enjoyed Braid, but from a distance. I never played more than a few levels — instead, I just watched others beat it and unlock the mysteries for me.
But there’s something to be said for the depth that The Witness goes to. That simple line puzzle at the beginning becomes so much more, as you begin walking around the island solving panel after panel. Learning the rule was like learning a new language; I had to understand basic forms, concepts and scenarios just to get by some of the easier ones.
When they click, though, it’s a rush. I might have taken Jonathan Blow’s name in vain a few times after conquering some really tricky ones, but finishing an area feels like mastery of a course. The way that later puzzles interact with the environment is incredible as well. Places like the keep, the forest shrine, the desert temple… so many used the environment in such interesting ways.
I think my biggest “pro” for this game is how focused it feels. Nothing is happenstance, and absolutely everything feels placed for a determined reason. Trying to discuss it without spoilers is difficult, but there’s a point in this game where once you begin to understand things beyond just the puzzle panels, it becomes an entirely new experience.
Beyond that, there’s even more and more things to unravel, through different passageways or innocent-looking areas. The Witness is incredibly complex and layered, and so my biggest pro also seems to be an issue for others: the game requires you to invest, or at least be willing to buy-in and immerse yourself in the world more than most. There’s no real story hooks or explicit plot, just hints at grander ideas that people are still unraveling. I know some have expressed frustration with this, and I’m interested to hear what you think about that.

Kenneth:
The fact that I can listen to everything you’re saying about The Witness and nod to myself in agreement makes the fact that this game is not clicking with me all the more frustrating.

You’re right about one thing, the game feels very focused and deliberate. It’s the advantage of having this enclosed space to walk around, and limiting freedoms in order to make sure the player is seeing exactly what you want at any given moment. The Witness is something that is filling every inch of a very specific page, and it means it’s compact and structured in a way that few games ever are. It’s something like Journey or Gone Home in that way.

But even so, it’s hard to appreciate much of that mystique when the game seems altogether unwilling to meet you halfway.

There’s nothing that resembles a traditional tutorial, and I think that actually works in the game’s favor in the beginning. You’re shown the most basic of concepts and are forced to apply them to more complex puzzles, and even learning how those simpler puzzles work gives you a references point for some of the mid-tier ones you’ll come across. However, I found a lot of the time when I reached some puzzles I was given nothing that resembled guidance as to how they worked. Even now I still have yet to figure out what the actual solution is to certain puzzles, and can’t even find the “tutorial” panels that are meant to gradually demonstrate the rules to you.

I’ve spent the majority of The Witness either lost or mad, with only the briefest moments of glorious satisfaction in between.

I honestly feel like the whole enigmatic and nontraditional approach to storytelling and world building works against it because of this, because I’m not feeling the pull to keep trying and moving forward that a more explicit story could have. I know Ashley Johnson is supposed to be in this game, but where is she at?

I definitely agree that in some cases, solving a puzzle meant learning a rule you haven’t figured out yet, and the game could do a better job of at least implying a place to find those “tutorial” panels. There’s a boat you can find that actually summons a map of the island and lets you ride around to different ports on the island, but even finding that came about by chance. I would have liked something like that be closer to the beginning area, so it’s more likely you find it and utilize it.

So much of what is good about this game makes you begin to tear apart that mystery though, and forces you to think without being told how to. There’s a bit hidden away (not telling where!) that discusses the idea of perceiving truths in the world. There’s the latent truth, the truth we can discover, the truth that others discover, and then there’s our interpretation of their interpretation. Art often falls into these categories, as it’s an artist trying to interpret something and convey it (a third-level interpretation) and our view and thoughts on it (a fourth level).
I think a lot of what The Witness does is try to encourage you to seek and discover those truths by applying ideas yourself. The panels don’t just teach you how to solve more panels, they’re trying to teach you how to do other things. They act as tutorials more-so for the island, as though someone left them behind for someone to uncover.
So I do think there’s some issues with buy-in, but I don’t think this game would have the same power or resonance if it gave those to you. If a prompt opened up or a narrator explained it. This game is about discovery in so many ways, and I think to take that away might detract from the core concept it’s trying to convey.

It’s true that what makes The Witness great is its sense of discovery and that “aha” feeling, but when those epiphanies are as few and far between as they can be in The Witness, there’s little reason to continue playing, and breaking out a guide feels like cheating. There are other things I can be doing and other games that I can playing that don’t have that same inaccessibility.

However, I don’t think that any of these things I’m saying are, for the lack of a better term, legitimate criticism. Despite my inability to commit to chipping away at the indestructible wall that is The Witness, to say that a game that is functioning exactly as intended is worse for doing so is a bit reductive and shortsighted. The Witness isn’t for me, but it unapologetically makes its choices and sticks with them, and doesn’t care whether or not I’m along for the ride.

There’s something admirable about something that doesn’t exist to grab the widest audience, it simply is what it is.

We talk a lot about the idea of a “perfect game,” and while I don’t think a game that is altogether flawless exists, I do think there are a few games that execute upon what they set out to do perfectly. The Witness is not a game I enjoy playing, but I do believe the fact that I don’t enjoy playing it means that it did its job.

Well spoken, Kenneth. I only take qualms with the idea of The Witness being impenetrable, but then again, I’m the type to beat my head against the wall and enjoy it far more than most.

Through so much of this game, though, there’s just this mystique and amazing sense of unifying theme. From the world itself to the many wonders you unlock on the island, so much is there to explore, and not even close to all of it is mandatory. I’d ask those who have yet to feel “hooked” by The Witness to do some exploring, go inside buildings, and examine the world around them. To give the bigger moments I’ve been alluding to away is to take one of the biggest surprises of the year from someone, and yet those moments of sheer discovery and wonder are what made The Witness so special to me.
I’m glad we’ve had time to discuss this back and forth, as it’s helped me approach this discussion with perhaps a cooler head than I would’ve had a week or so ago. The fact still remains, though, that I think about The Witness often, even when playing other games. It’s such a unique and well-made title that I’m still seeing line puzzles in the real world and tracing them in my mind. It’s an experience that’s really unlike anything else, and I can’t encourage people enough to go in as blind as possible and just lose themselves in the world for a while.

The Witness is a profound experience, unlike any other and certainly intimidating in its refusal to give away its secrets for free. However, those with the inclination to buy-in and delve deep will find a trove of excellence, in the way it utilizes simple mechanics to convey greater themes. One of the most cohesive and intricate releases you can find, but not for the faint of heart.