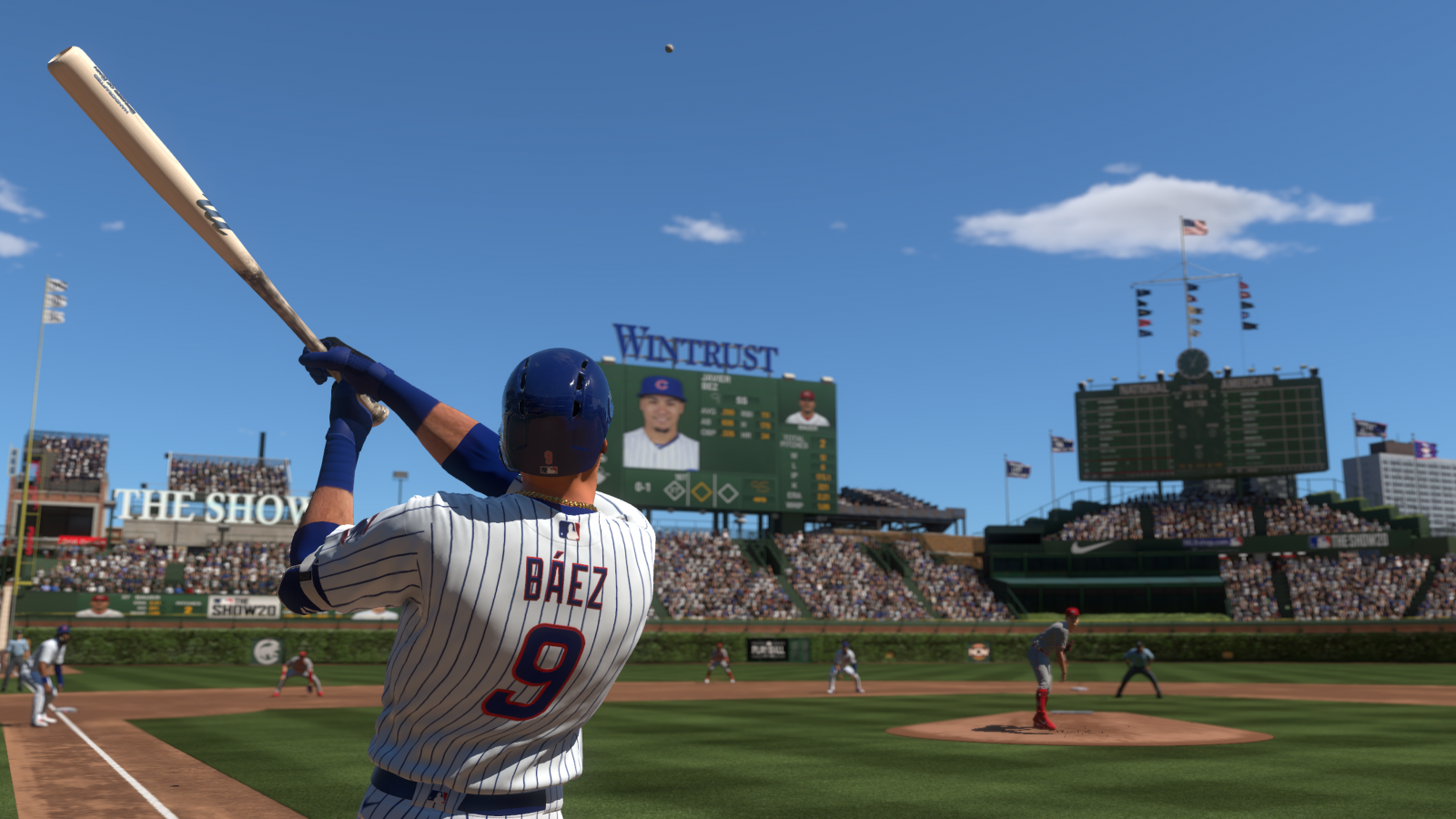 Let’s face it, spring doesn’t begin until baseball season is underway, or the release of one of PlayStation’s most prized franchises: MLB The Show 20. As a baseball fanatic, I grew up playing MLB The Show way back in 2006. And here we are, commemorating fifteen years of an amazing franchise that’s brought about some of the most realistic visuals, memorable commentating, big names, unique games modes, and most important – the feeling of experiencing some of the most historic and iconic diamonds in the world. And you get to experience it all in the comfort of your home. And no cheat code is required to beat Houston.

MLB The Show 20 is more than just a step up from the yesteryear’s game, it’s a culmination of all that the developers have learned over the years and are now serving it up to us with a ninety-five miles-per-hour fastball to the face. As someone who has played last year’s version of the game, this is without a doubt my favorite. With MLB The Show 20, there’s a lot of new game modes, major updates, and mechanics that have been added to give this version a leg up on its predecessors and competition. As a baseball aficionado, I couldn’t just take someone’s word, I had to play these modes and feel out the new game mechanics for myself. 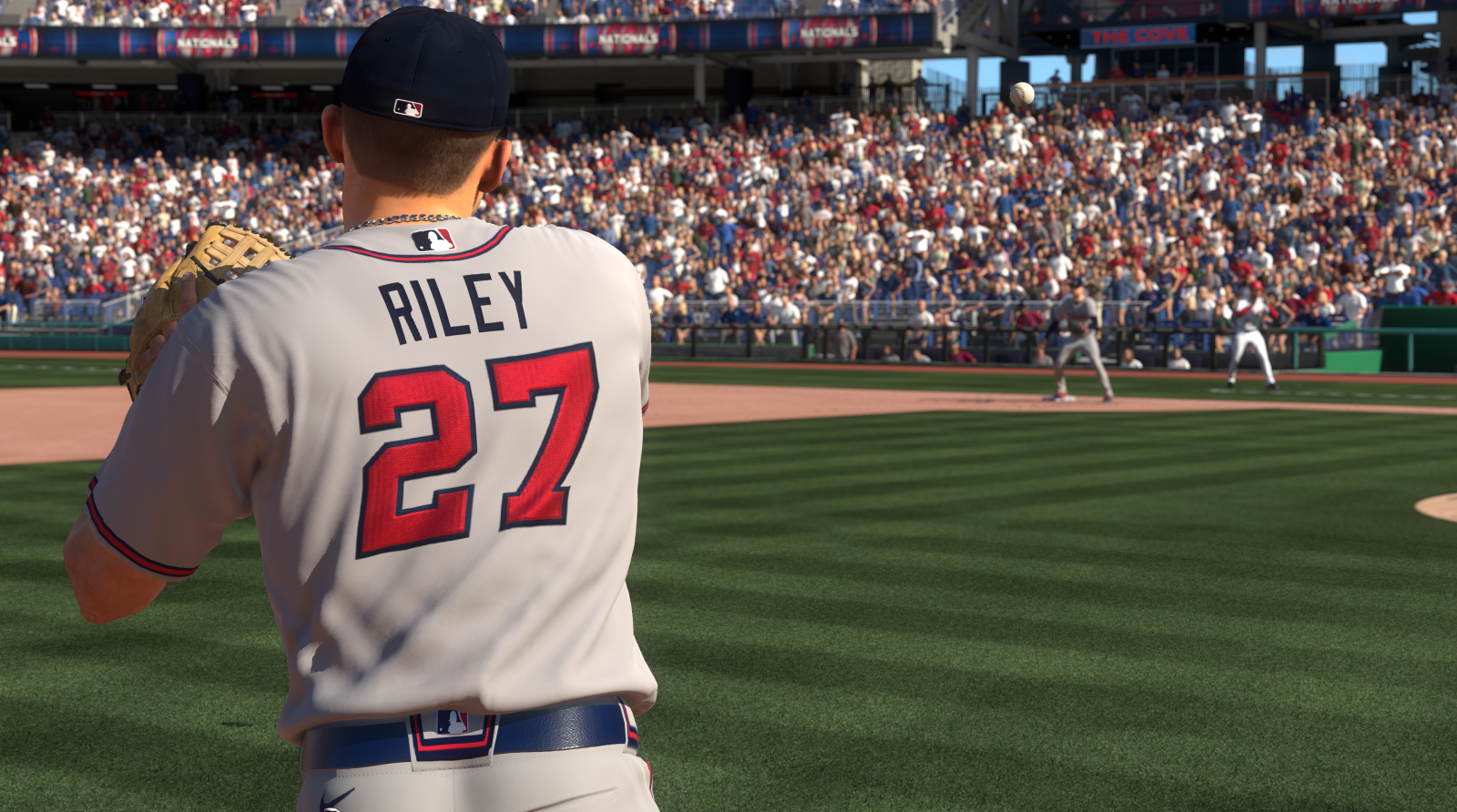 I immediately jumped into the Play Now mode, which allowed me to choose the current roster of players, live rosters powered by the MLB Network, or Online rated. I chose my favorite team, the Yankees, and started the slugfest. Because I played as the away team, the game intuitively gave me the on-the-fly tutorial on how to throw some heat, and it does this without taking me out of the game. The amount of control I had on the mound is unprecedented. The ability to communicate with the catcher, choose pitches, check runners on the plate, and command a shift when a hitter is up made me feel as if I were truly managing the game. One thing that immediately stood out was the commentary and chatter from the fans, players, and commentators. There was constant chatter from the commentators about who was at bat, how good or bad they were, and how you, the player, reacted to certain batters or pitchers. Hearing a fan heckle a pitcher that I owned by hitting back-to-back home runs adds a sense of depth to this game that many developers would overlook, but not Sony San Diego Studio.

One of the new mechanics MLB The Show 20 adds is the First Step system. For those of us who have played the game or know how important it is to be on your toes when a ball is hit your way, this is a huge step. When a ball is hit, whether it be a line drive or a blooper that’ll fall in no man’s land, the player closest to it will immediately begin to step in the direction of the ball so that it’s easier to field. I got the chance to put this to use when I was in the bottom of the 4th and a player from the Orioles hit a blooper into right field. Me, expecting not to get there before the ball hit the ground, just tried to run there as fast as I could. But I realized that my right fielder intuitively took steps towards the ball as it left the bat. Usually, the ball will drop and the players won’t have a chance to catch it, but with the First Step mechanic, I was able to field the ball without needing to dive or try to cut it off. But this isn’t the only upgrade I noticed. 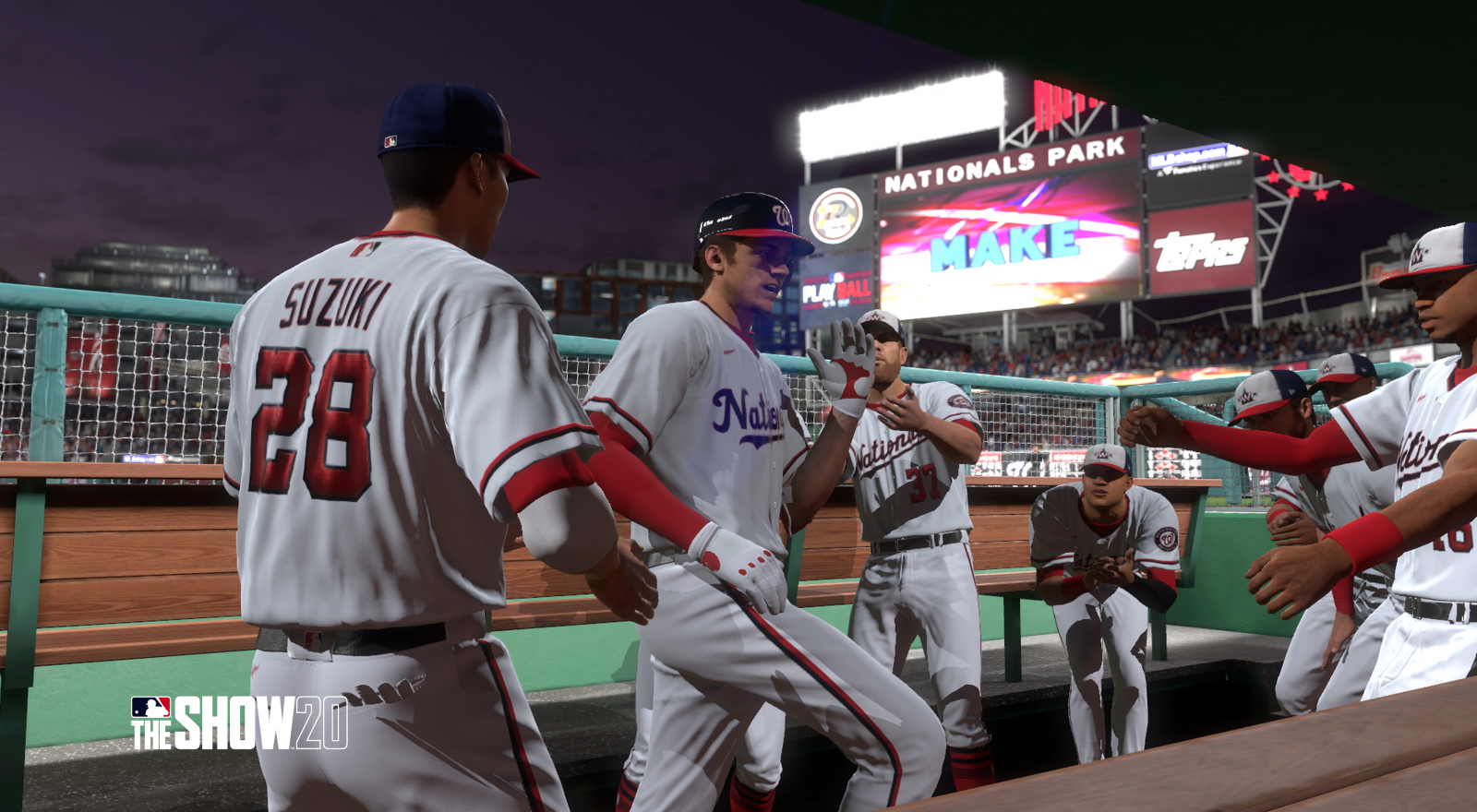 The defense of the opposing team is lethal. No longer being late and reactive – in MLB The Show 20, it’s as if the defense could read how I was going to put the ball into play. The outfielders would get early jumps on balls hit towards the warning track or turn 6-4-3 double plays with ease, but this also let me take advantage of the situation. When a ball is caught or cut off, the fielder has a throwing indicator that will show how hard and precise he can hit the cut-off man or throw to the plate. This is a major advantage as it gave me perspective as to where to throw to stop an advancing runner. All isn’t one sided: hitting a ball directly at a fielder, I could make them juggle the ball or force them into an error easier than in previous iterations. This game feels as if it gives the player more power in regards to strategy. And we all know how much strategy plays into the game of baseball.

When it was my first turn at bat, the game guided me through the in-game tutorials that made learning new batting options in MLB The Show 20 a breeze – even when those ninety-five miles per hour fast balls were blowing by. As I began to see how the pitcher pitched to certain players, I learned when and where to swing, and this gave me a great advantage. When swinging the bat at the perfect time and being in the perfect position on the plate, the game will activate the Perfect-Perfect batting mechanic, allowing you to crush the ball with precision. Not saying that the fielder can’t make a play to catch it, but it’s more likely that you’ll hit a home run when swinging with power or hitting a line drive that’ll put you in scoring position. All these additions are available in all game modes, and there are a lot. 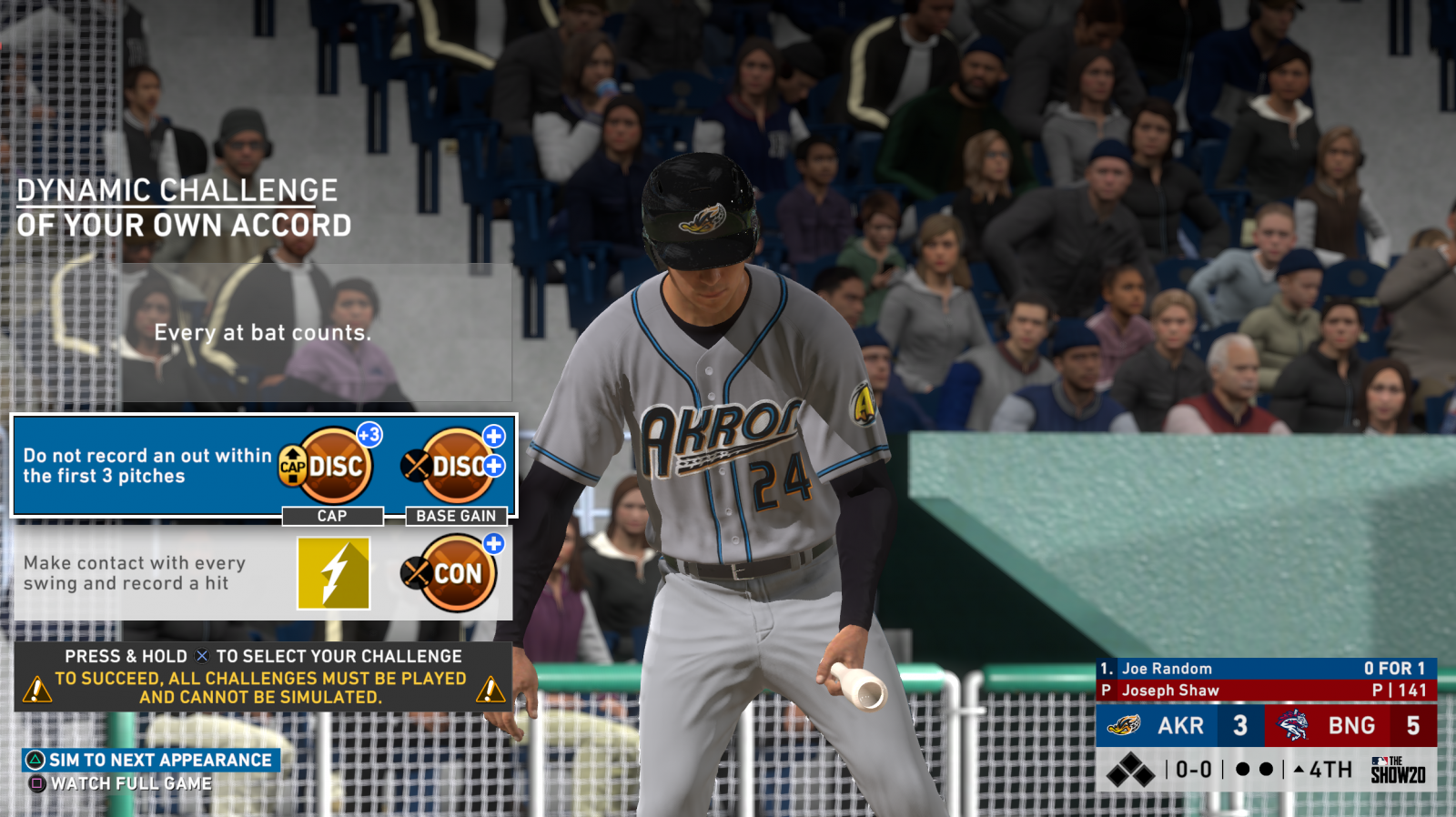 There are tons of game modes to choose from as well, all offering a slew of new ways to play. What’s great about these modes is that you can import your MLB The Show 19 data into some of the new modes. Diamond Dynasty mode lets you earn experience points (XP) that can be used to upgrade and customize equipment in different modes. These are represented in cool looking Topps baseball card-like visuals, like the ones you can buy from comic shops. No longer does your favorite franchise have to be ranked last: franchise mode allows you to build or rebuild your favorite team as you see fit and take them to the World Series for a pennant. Road to the Show is an amazing mode that allows you to create a player from the ground up by selecting their hometown, their position, batting stance, attributes, name, number, etc. This mode allows you to take that player to the big leagues. Within Road to the Show, you will work on building attributes via a skill tree such as Captain, Heart and Soul, Maverick, and Lightning Rod. Each of these four attributes have multiple skills to unlock in them via completing tasks.

Now to the new modes: Custom Leagues and Showdown are two brand new modes in MLB The Show 20. Custom League is a deep and rich mode that allows a player to create a league that others can join in and compete against one another. You have total control of who joins, how many teams can join in the season, how long the season is, how competitive the rules are, and how long each game lasts. This is truly a mode for those who enjoy online competitive action, whether it’s with friends for fun or with those seeking to reign as a heavy hitting slugger. 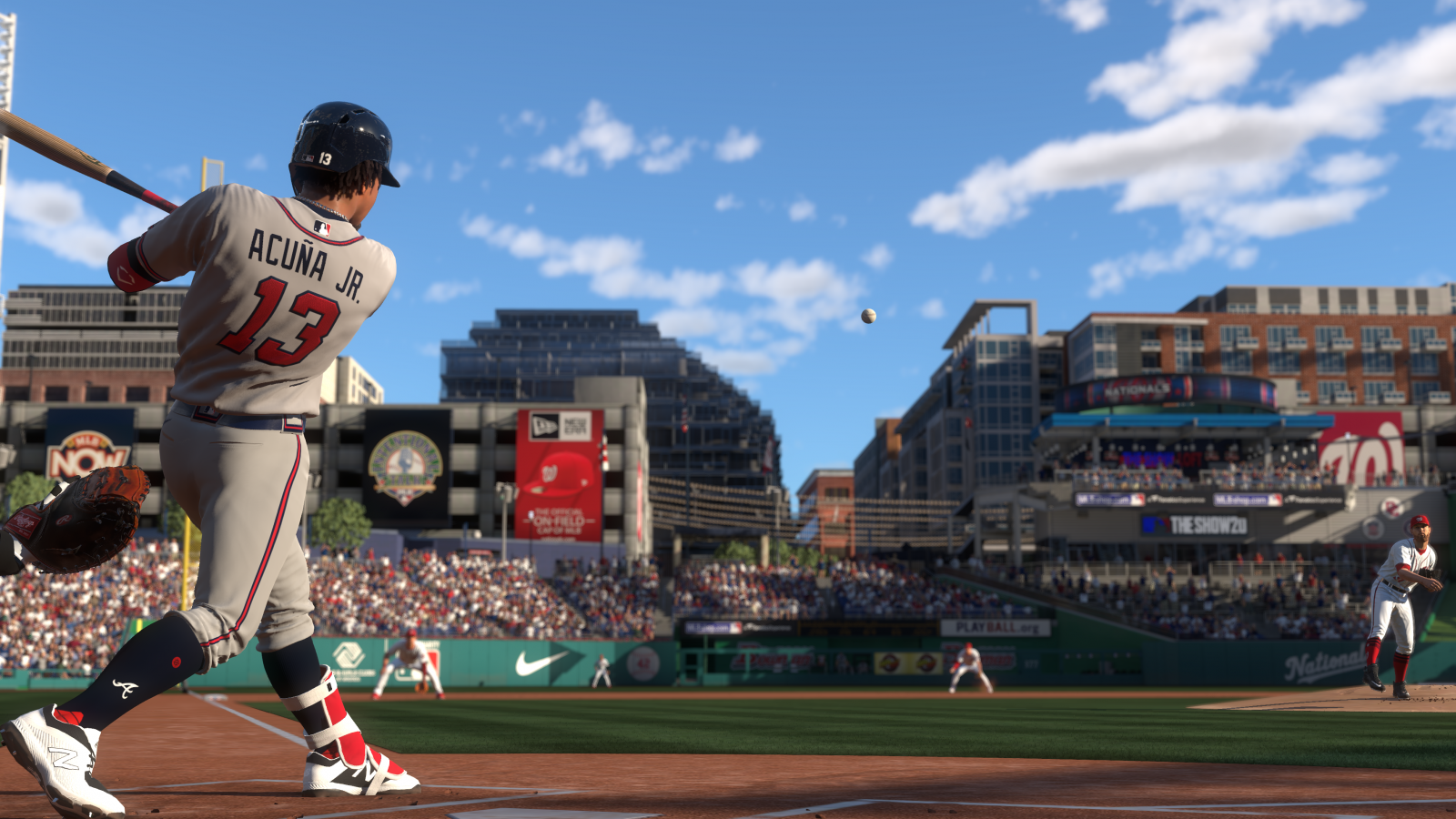 Showdown is exactly that, except there’s no shootout at high noon. Showdown mode is a new and dynamic way of challenging yourself with a roster of players you call up. Your squad is then pit against challenges like ‘Hit a game winning home run at the bottom of the ninth with two outs’. And to add a bit of action and tension to the mode, in the end, you must complete these challenges against some of the best pitchers in the league.

With all the game modes, I initially found it difficult to find a mode that allowed me to simply start a season and play. In a time where playing online against competitors, keeping rosters up to date, and consistently challenging the player, I see how simplicity can be overlooked; and this is where the game falters. With so much going on with gameplay, new game mechanics, and modes, the simplicity of just jumping into a game got lost for me.

MLB The Show 20 is clearly the culmination of all the hard work that went into the previous iterations, and then some. The updated and added game mechanics such as First Step and Perfect-Perfect batting add a sense of realism to a game where instincts and being quick on your feet is important. With a plethora of game modes, it’s almost overwhelming at times because you don’t know where to start. But once you begin, this game is hard to put down.

T.K. is a narrative designer and creative visionary. As a game writer, he spends much of his time designing and developing worlds, developing deep characters, and writing strong narratives to evoke emotions from the player. If you can't catch him writing, you can catch him on 2's.
Related Articles: MLB The Show 20
Share
Tweet
Share
Submit