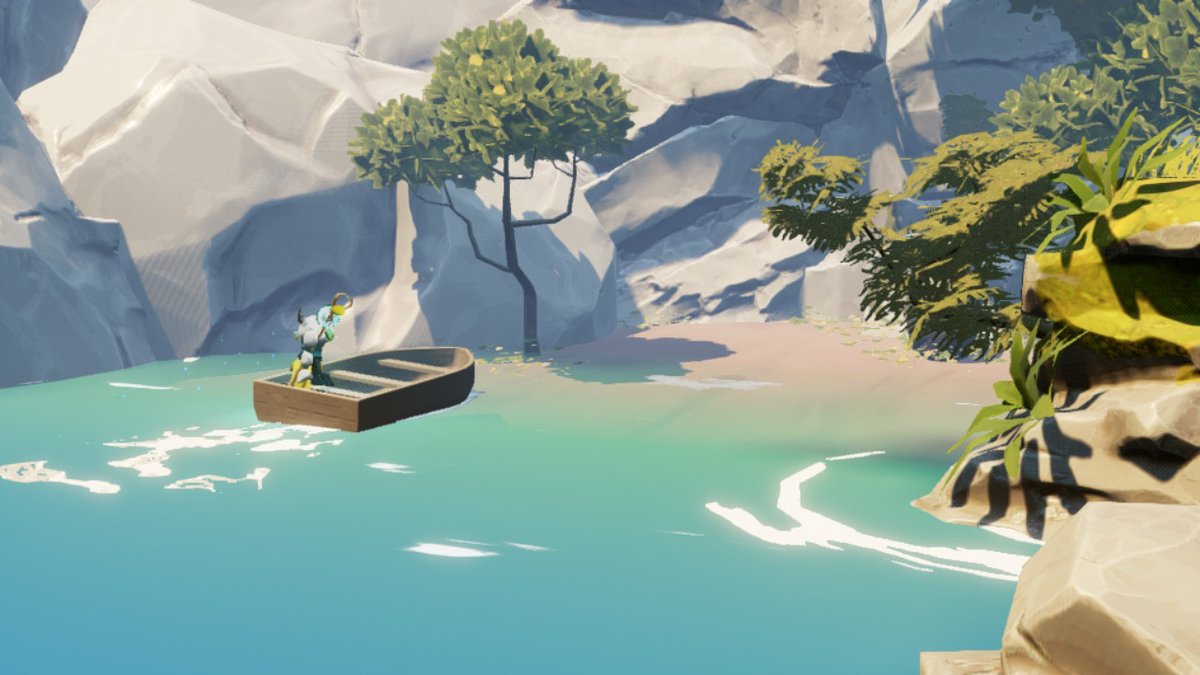 Sometimes you just need a game to relax with. Perhaps you’ve been white-knuckling a boss in Sekiro or mowing down insurgents in Division 2, and need to unwind with something a bit less serious. As someone who has been taking part in both of those activities, the Nintendo Switch exclusive Elli has been a refreshing experience. This laid-back, fixed-camera puzzle-platformer certainly checks the “chill” box, but beyond that directive, Elli struggles to stand out among its platforming peers.

One of Elli’s most impressive aspects is apparent right off the bat–its gorgeous presentation. The world of Elli is beautifully saturated with soft colors and bold vistas. I often stopped to marvel at, and take copious screenshots of, the game’s myriad settings, which are roundly drenched in personable characters, stunning heights, and unusual geography. The music, while more forgettable than the game’s visuals, still contributes to the overall calming, pristine presentation. Naturally, the game’s aesthetic is only one aspect of the overall experience, and without solid fundamentals, a platformer isn’t worth its salt. But, before we discuss that part of the title, let’s check in on the game’s plot.

Elli begins as its titular character settles in for her six-hundredth birthday party, when suddenly chaos breaks loose. Ghastli, a jealous rival of Elli, has come to disrupt the party, and steal five blue crystals which contain the power to control time–or something like that. Frankly, the narrative in Elli is entirely superfluous to the experience. This introduction is the first of only two story beats you’ll encounter throughout your adventure, and the other is about as useful as the first. While the game does feature some solid writing and characters, there just isn’t much story here to get engrossed in. Surprisingly, Elli does have a fair amount of lore, but it is seemingly inaccessible to the player, leaving the narrative and world of Elli feeling full of potential, but wholly unsatisfying. As such, this game lives or dies by its gameplay, and Elli is much more successful on this front. 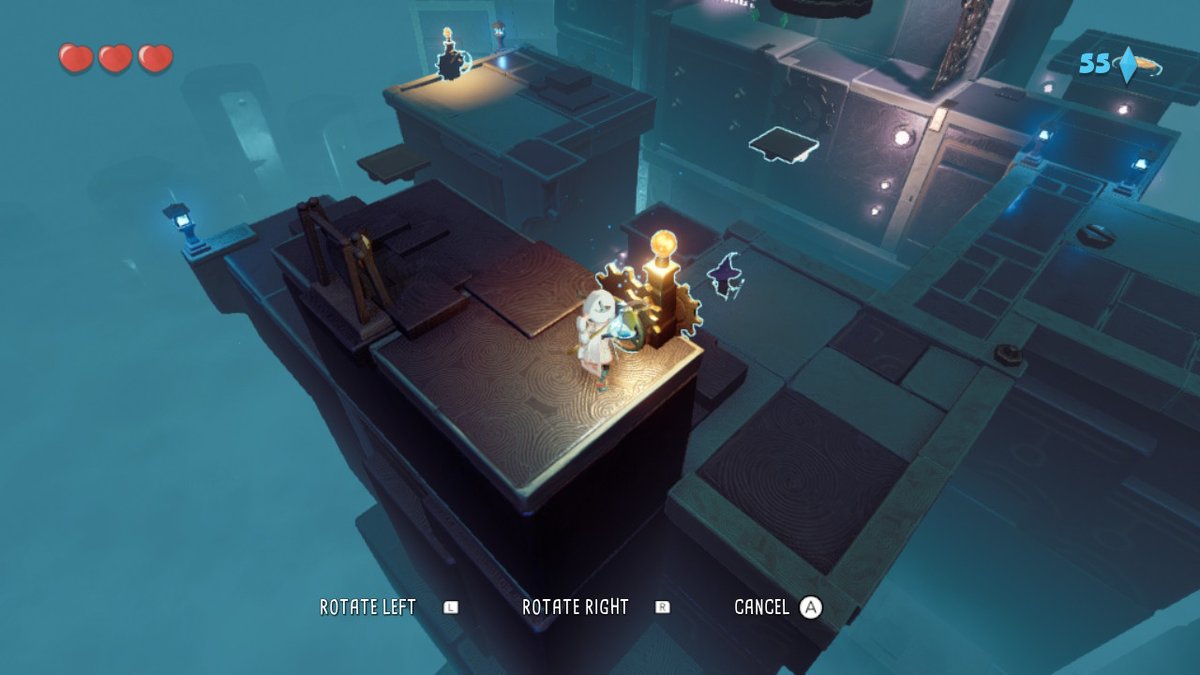 At its core, Elli is a basic isometric 3D platformer–but Elli folds puzzle aspects into its simple mechanics. To that effect, Elli feels rather laid-back. For the lion’s share of the game, all you’ll have at your disposal is a single-jump and the ability to pick up myriad items, from crates to bombs. As such, developer Bandana Kid rarely throws the player into a straightforward platforming challenge. Instead, the game is comprised largely of dense, puzzle areas. While these challenges won’t come anywhere close to breaking your brain, they offered just enough pushback to keep me engaged, and keep the shallow gameplay mechanics feeling fresh. From switch and gate puzzles to mazes, there are a fair amount of puzzle archetypes to explore. As you get deeper into the game, you’ll encounter more and more repeat puzzle types, but they’re used creatively enough that it is a non-issue, especially considering the game’s relative brevity.

On the whole, these puzzles stand as the best aspect of Elli, providing a largely satisfying gameplay experience. However, if the game had a bit more mechanical depth, the puzzles could be even more satisfactory. As it stands, Elli’s jump is easily controlled and responsive, and her movement is nimble. But, that’s all she wrote. Aside from the ability to pick up various objects, the puzzles and overall gameflow are largely inhibited by the lack of complex platforming mechanics. Frustratingly, the late game introduces both a double-jump and teleport for Elli to use, and having those abilities made the game far more fun by a factor of ten. I wish that the developer decided to give Elli these tools from the start, as it would’ve led to the game as a whole feeling more dynamic. The underlying mechanics are by no means bad, nor are they unpolished–they just need to be expanded upon a bit more to flesh out the experience.

While Elli maintains a high level of polish throughout much of the gameplay, there were several instances of rather amateurish design that dampened my experience. There were distinct times in which I was able to jump against a wall to cheese a checkpoint and trigger it ahead of when I was supposed to, and then reload from checkpoint to skip ahead. There was another instance in which I needed to blow up a boulder encasing a crank, but I was able to push against the boulder and use the crank through it to shortcut the puzzle. 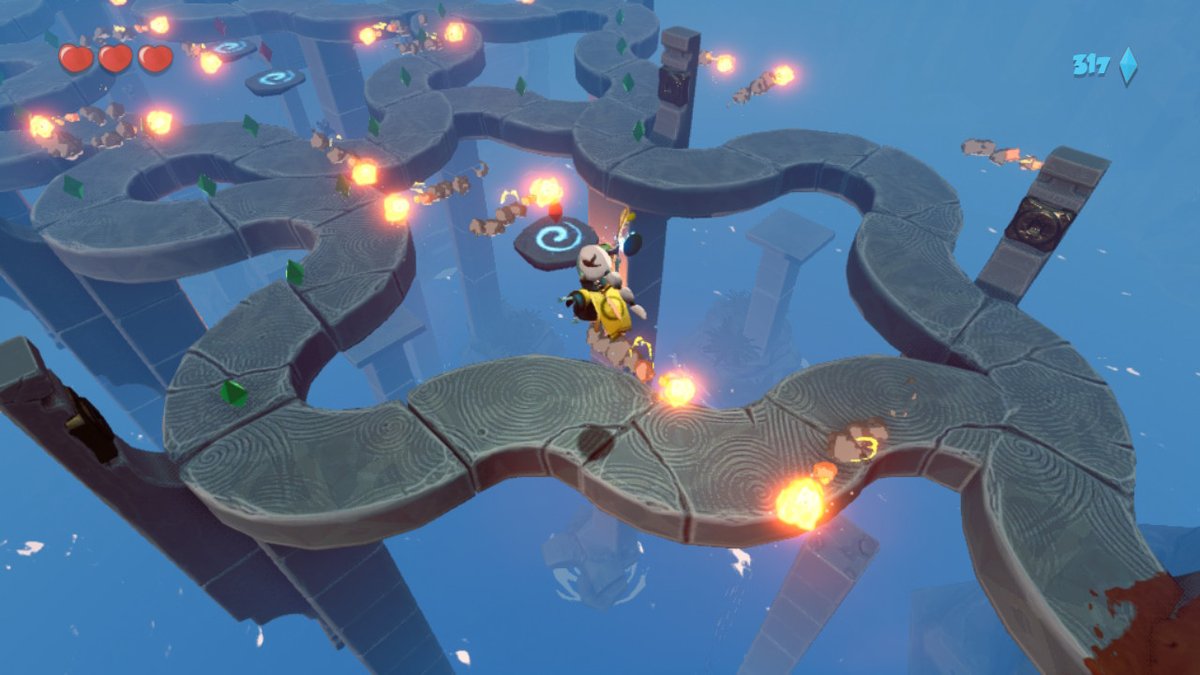 The game’s life system also is rather shoddy. Dying will replenish your health and send you back to the most recent checkpoint. Simple enough. However, dying at either two or three hearts will replenish your supply and won’t lose your progress past the checkpoint. However, if you die with one heart, you’ll still return to the checkpoint, losing your gems (the game’s currency) and puzzle progress accrued past said checkpoint. So, to avoid losing progress, I would often kill myself if I took a single point of damage, so I could try again with no repercussions and full hearts. If I had just forged ahead and tried to beat the section in one go, and I lost a second heart dropping to one, I would’ve lost my progress upon death. This is just a bizarre issue, and one that, like those previously mentioned, should’ve been playtested and fixed ahead of release.

That said, Elli is a front-to-back fun and calming game. Between its gorgeous presentation, solid mechanics, and well-designed puzzles, there is a lot to like here. Considering its laxidasical pace and low difficulty, it is a fun game to unwind with at the end of the night. At the same time though, between its simplicity and omnipresent design issues, I’m not sure this is one that needs to shoot to the top of your backlog. While Elli offers fundamentally sound and relaxed fun, it lacks a central hook or idea so profound that it can elevate itself amongst the scores of truly fantastic eShop exclusives. If you enjoy platformers, Elli is a safe bet, and at $20 the price is right. But, for those who lack that same platforming passion, you can pass on this one for now.

Elli’s relaxed nature makes it the perfect game to unwind with. Its world is gorgeous and its gameplay is solid, due in large part to its well designed puzzles. By the same token, its myriad technical issues and solid, yet totally shallow, core mechanics and story hold it back from being truly great.

Abram is an aspiring games journalist with a soft-spot for titles published by a particular company that starts with N, and ends with -intendo. When he's not playing, or writing about, video games, Abram is most likely ranting to no one in particular about various films he's seen, or grabbing the sketchpad to do a bit of drawing.
Related Articles: Elli
Share
Tweet
Share
Submit