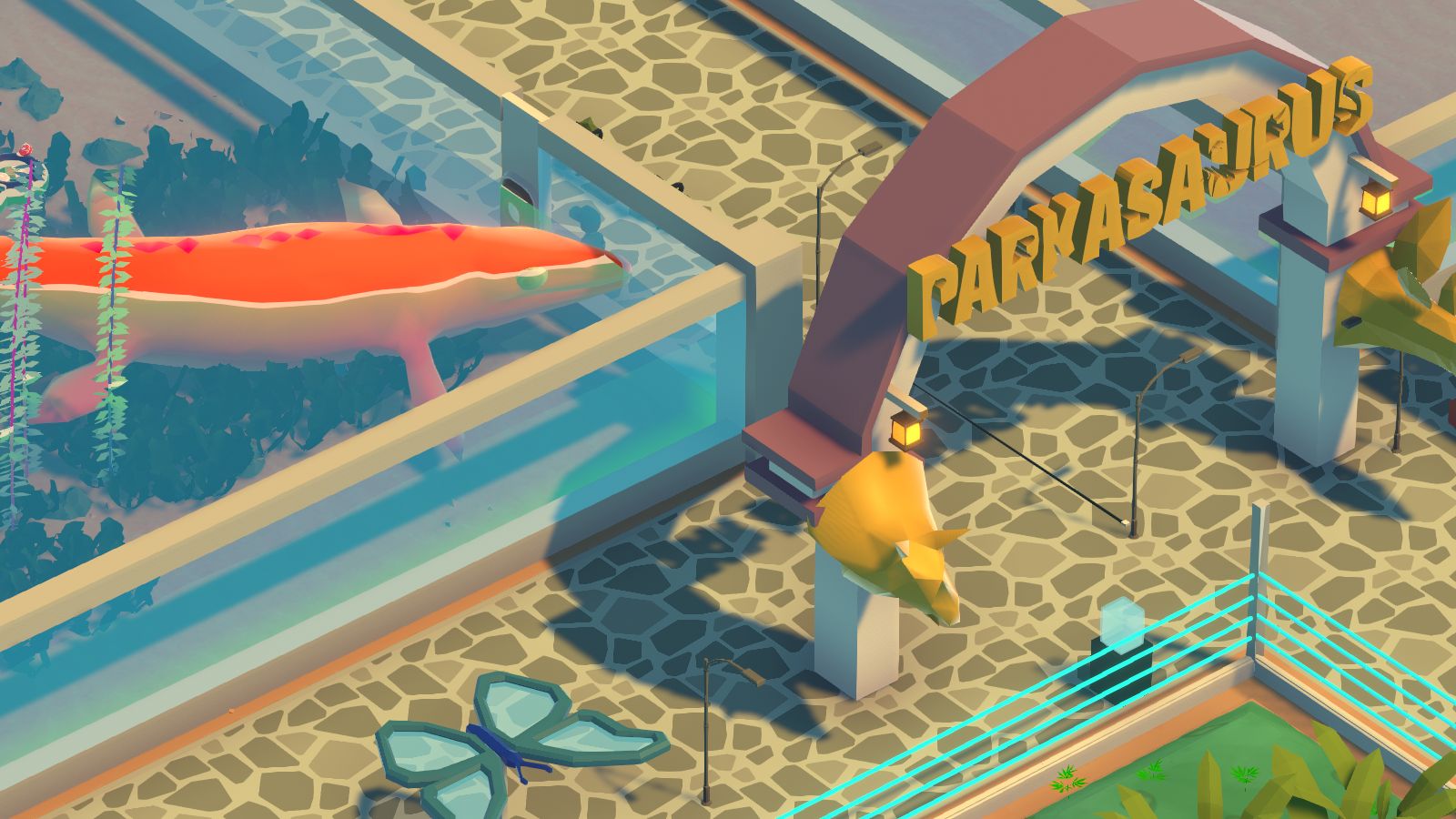 Our friends Chris and Mayuran over at Washbear Studios just released the Sea Monsters DLC for their adorable dinosaur park builder Parkasaurus on August 11th, 2022. I’ve been a huge fan of this game since early access, and it just keeps getting better and better. There are plenty of dinosaur theme park building games out there, and I have reviewed a good chunk of them, but Parkasaurus still sits at the top for me and the Sea Monsters DLC is just icing on the cake.

The Sea Monsters DLC brings in eleven new aquatic and semiaquatic creatures to play with along with three new biomes: photic, lagoon, and beach. There are also three new story missions to play through, over twenty new exhibit items, toys…and of course, new HATS! It’s something as simple as your dinosaur being able to wear hats that just makes you sit back and smile while playing. 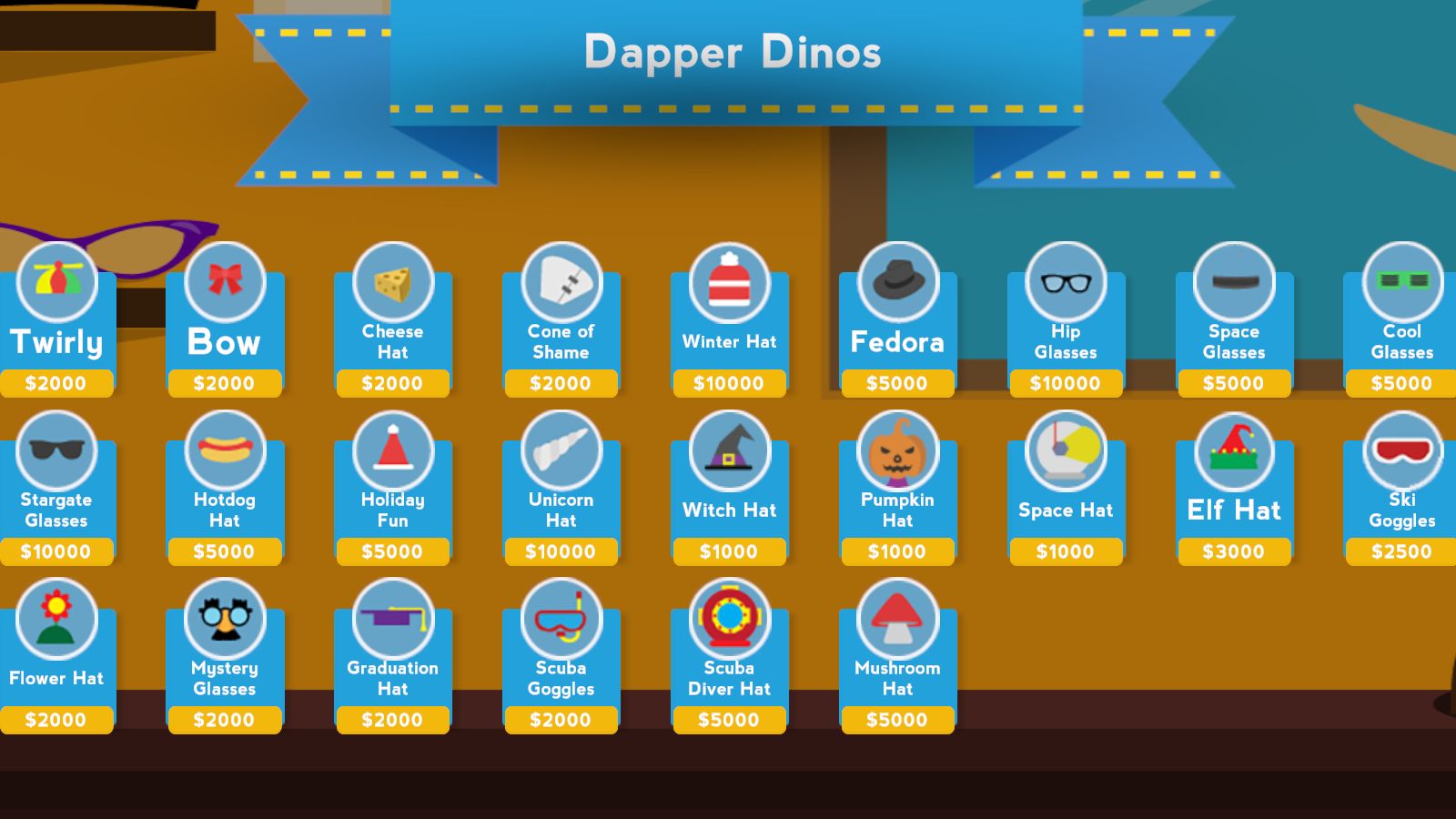 These are just a few of the awesome hats your dinosaurs can wear. The scuba goggles on my Megalodon are adorable.

My son was just getting into dinosaurs and sharks at the time Parkasaurus launched back in 2020, and (thankfully) his love of both has grown even bigger since then. He’s 8 now, and of course we had to start with our two favorites, the Megalodon and the Mosasaurus. Building the new aquatic enclosures is just as simple as building the original enclosures. There are glass walls along with the ocean tiles, and I am not sure when the Smart Water tool was added in, but you can fill your enclosure up quickly and easily with it, which has your tanks up and running in no time. The terrain decorations such as the kelp, corals, and lava rocks are all wonderful additions to add to your enclosures and certainly made things feel more beachy.

The new aquatic species can play with all the same toys as the land dinos can, and it’s adorable to watch them boop around the inflated flamingo rafts in the water. They love to have a good time, but all that playing wears them out so make sure you add plenty of privacy tiles to their tanks because they love to snooze in peace and quiet!

I probably should have built a bigger enclosure for my Mosasaurus, because holy smokes do they get HUGE! I was pretty shocked how big my guy Harley got over night, and I’ll definitely be working on giving them more space. My Megalodons seem content in their tanks, and are fully equipped with scuba goggles and mystery glasses living their best life. 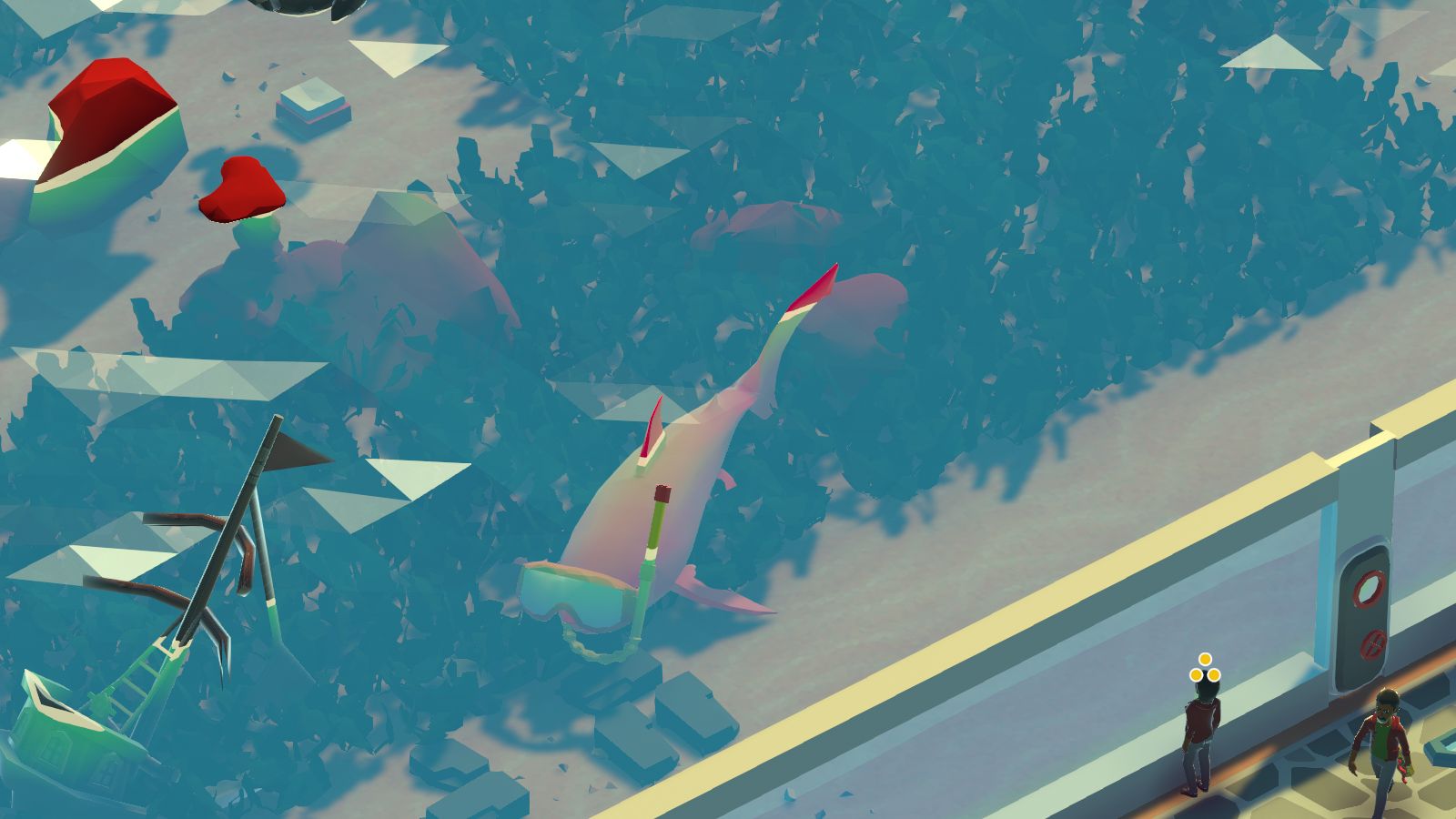 How can you be scared of this Megalodon when he is so cute!

It didn’t take long for an enclosure to burst open, sending water rushing through the park. Thankfully it’s a quick and easy fix, as soon as the broken section of the wall is repaired, the water disappears.

There are fourteen new feeders included with the Sea Monsters DLC, and something I enjoyed was watching the vets put on a dive helmet and go into the underwater enclosures to feed and care for the dinos. 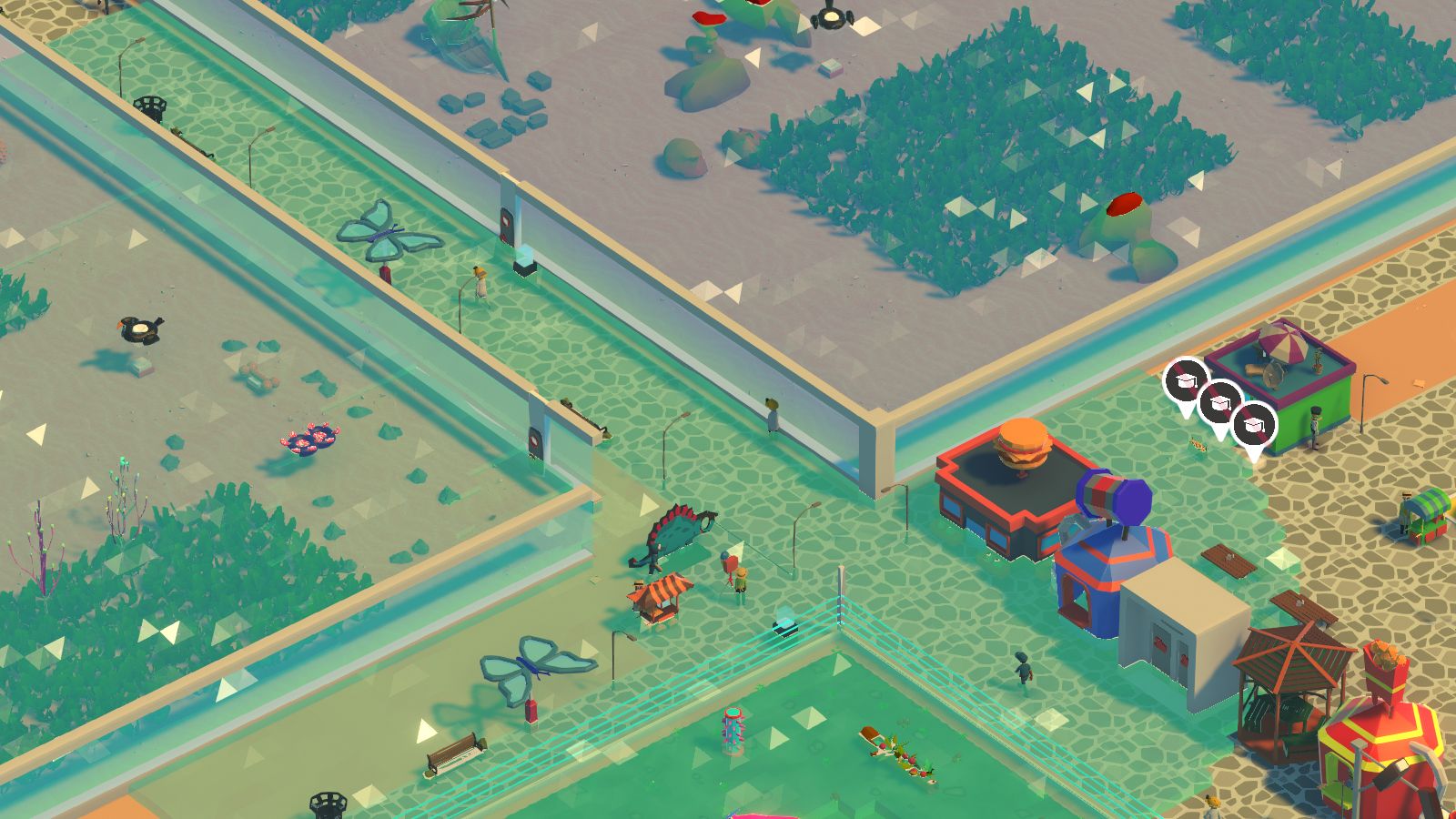 My Mosasaurus enclosure busted, but thankfully it was a fast and easy clean up.

After making sure I had the hang of things, I built a Sarcosuchus and Archelon enclosure, which are beach biomes vs the photic ones that the Meg and Mosasaurus were in. The baby Archelon turtles are so stinkin’ cute, I was literally saying awwww out loud when the eggs hatched. I love seeing the different color variations that each dino develops. The fun, bright, cartoon-like colors and graphics really set this game apart, and prove that you don’t need fancy graphics that blow your PC up to have a good time. Speaking of graphics, I noticed considerable upgrades to graphics in the game since I last played. 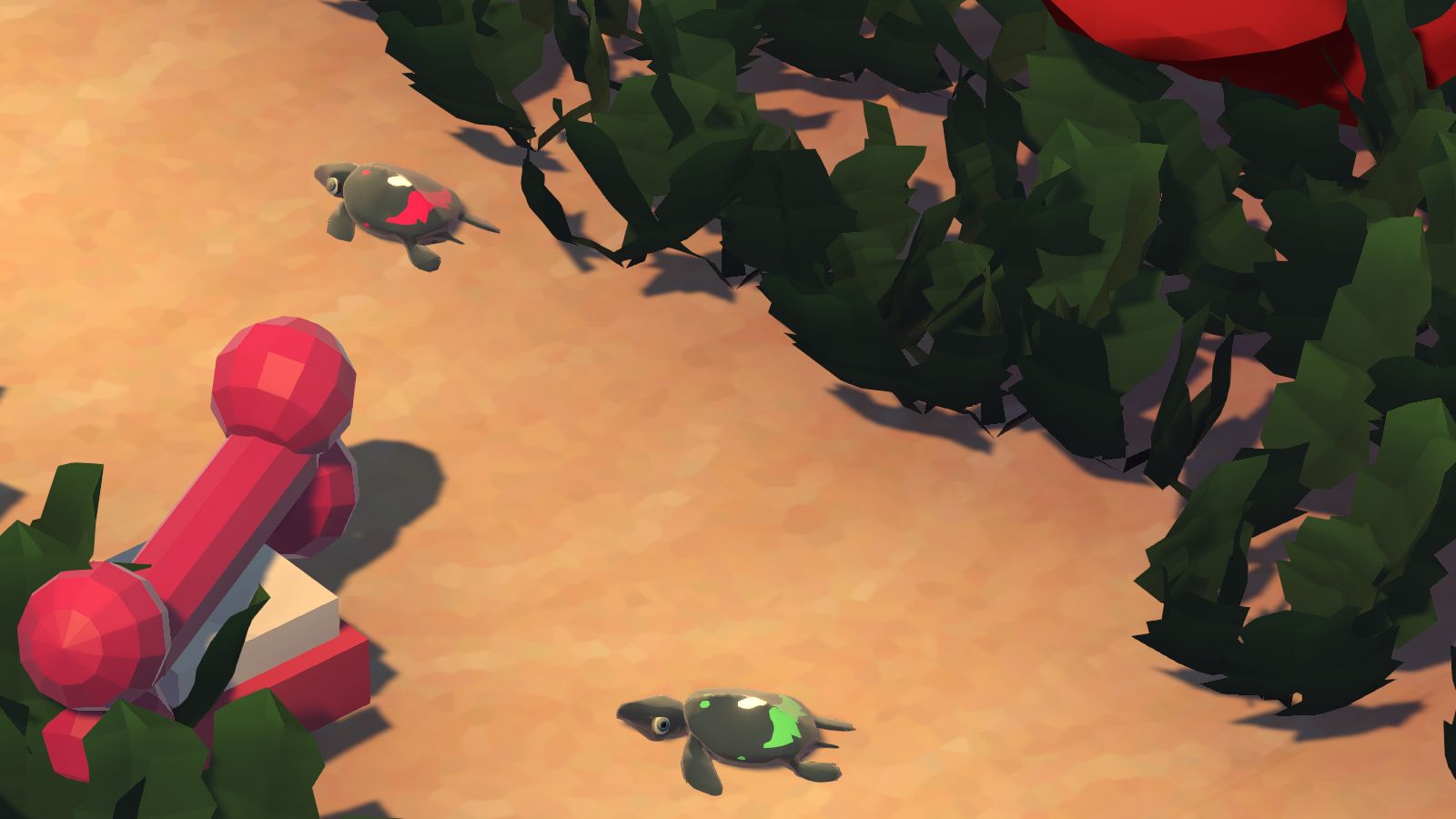 I did not encounter any bugs or issues while playing with Sea Monsters DLC. If I had to find something to nitpick (and I really don’t want to) it’d be that my Mosasaurus tail would clip through the glass if he got too close to the edge. It’s trivial and didn’t affect my time playing with the game at all.

I always have a blast playing Parkasaurus, and it’s still one of those games that makes me lose track of time while playing. Don’t even hesitate to buy the Sea Monsters DLC. If you enjoyed Parkasaurus, at $6.99 Sea Monsters is an absolute steal that gives you a lot of new content to play with. Chris and Mayuran work tirelessly to constantly tweak and improve this game, and I can’t wait to see what they come up with next!

Sea Monsters DLC for Parkasaurus is an absolute pleasure to play. With new aquatic and semiaquatic creatures, new biomes and enclosures, and three new story missions you will have plenty of things to do in your park. For just $6.99 this DLC comes packed to the brim with content, and most importantly you get new hats. Parkasaurus continues to be my favorite dino park builder on the market, and the Sea Monsters DLC brought in some of my favorite species such as the Megalodon and Mosasaurus.

Holly Hudspeth is a best-selling author living in Fort Worth, Texas. She has six published novels to date; The Skyy Huntington Series, which is an epic dark fantasy adventure, and One Small Detail, a stand-alone medieval fantasy. Holly also enjoys writing fan fiction based on her avatars from games such as EverQuest, Elder Scrolls Online, and World of Warcraft. Her first major purchase at the established age of nine was the NES, and she has been gaming ever since. She enjoys fantasy games, city builders, RPGs, MMOs, SMITE, and The Sims franchise. Most nights she is in SMITE with her husband and friends, or playing ESO. When she isn't gaming, she is probably either at Disney or planning her next trip there.
Related Articles: Parkasaurus, Parkasaurus Sea Monsters DLC
Share
Tweet
Share
Submit