Arc of Alchemist has nothing to do with alchemy. The word itself is only used two times in the entire game (yes, I counted). The game takes place on a post apocalyptic earth, where the whole world has become a desert and humanity has split up into several different nations, each hoarding resources. You play as Quinn, the casually suicidal leader of a small troop sent out to find the Great Power which will supposedly save the world. A neighboring nation has also sent out a group to do the same, strangely, also with a casually suicidal leader. It’s a simple premise, but it actually gets even simpler as you progress.

I will be talking about spoilers in this review, so here’s your warning if you care. You probably saw the thumbnail for this anyway, so I’d suggest you read on regardless. The plot takes two turns that are both easily predictable and have been done much better in other media. One: everyone’s actually been living on the moon and the Great Power is a way back to a restored earth. Two: your rivals join your party after their leader dies. That’s all that happens in the plot, there’s no discernable character development, interesting twists, or even cool moments. All of the characters are static anime tropes that you’ve seen a thousand times, demonstrated through cringe-worthy cutscenes that occur each time you return to your base. The base itself is what made me interested in this game in the first place. If I hear a game is a base-building action RPG, I immediately think of childhood favorites Dark Cloud 1 and 2. Unfortunately, neither the combat nor the building live up to the standards set by these PlayStation 2 titles. As you suffer through the button mashing gameplay, you collect resources to build new buildings and facilities at your base. The game is very limited in the types of buildings you can create and where you can place them, there are only a few types and your base exists on a grid. However, pllacing multiple of the same facility next to each other will “enhance” their effects. Over the game’s roughly six hour play time, I couldn’t tell what any of this building actually accomplished other than putting new weapons in the shop twice. This feature also has nothing to do with the rest of the game and is only mentioned in passing in a single cutscene. 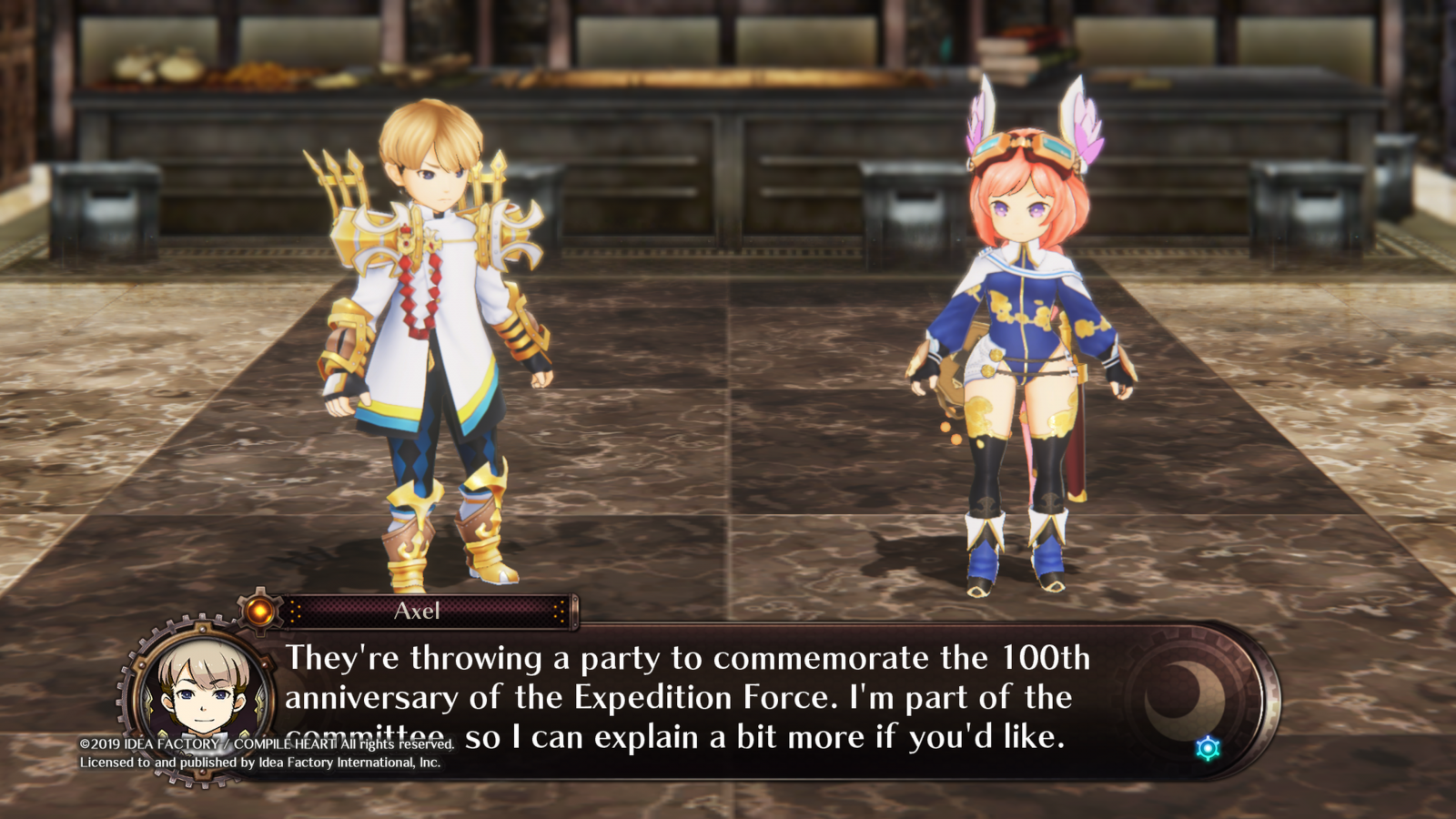 As mentioned previously, Arc of Alchemist’s combat is just button mashing. A single button, actually, circle. You have a secondary attack button as well, but every time I tried to use it, it did 0 damage. You can also dodge, but it feels stiff and basically worthless since enemies don’t give you time to react. To make things even worse, every single enemy has metric tons of HP and your party won’t help you at all, ever. They just stand there and maybe serve as a distraction. So essentially every combat encounter, including bosses, comes down to a single strategy: place one or more healing statues near the enemy you’re going to attack, mash the circle button, and hope the game doesn’t just decide to kill you instantly with no warning or animation, though this will happen much more frequently as you near the end of the game. When not in combat (which is a hard state to be in because enemies respawn infinitely) you’ll be exploring the copy-pasted desert environment with the occasional obstacle overcome using one of the four elements in your Lunar Gear. You start out with fire, which just sends a fireball forward, but you’ll quickly get the rest of the elements. Earth creates a small block that you can use to climb walls that are too high to jump, water shoots a ball of water forward, and wind creates a small gust that can remove sandstorms from your path. You can also combine two elements at the same time to create new effects, the only useful ones being the aforementioned healing statues and a fire tornado to chip away enemies’ health. You never have to use these combinations to solve any puzzles in the field either, you just encounter the same few over and over and use the required element to bypass it. 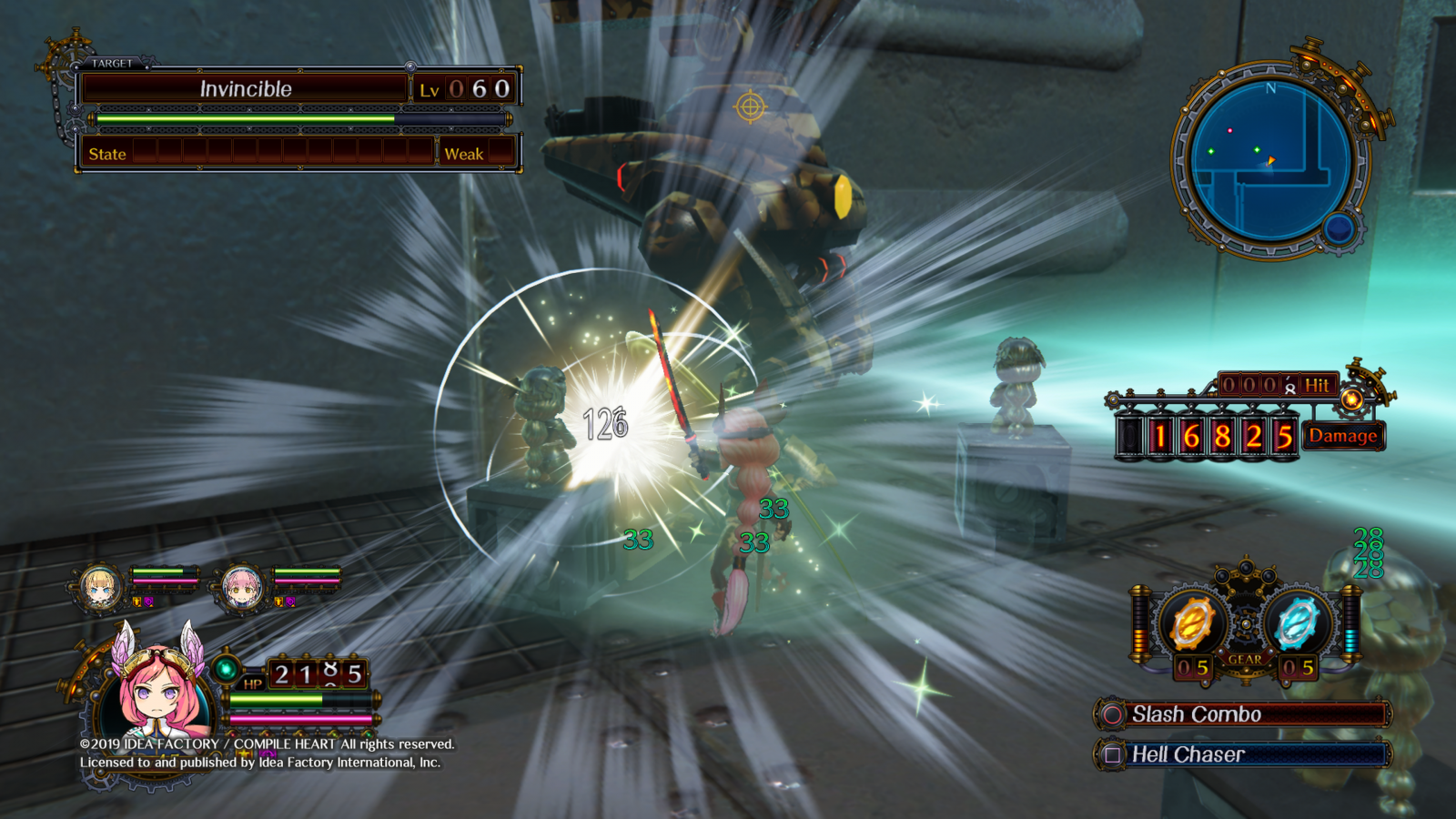 If you couldn’t already tell, I hated Arc of Alchemist. Sid Meier, creator of the Sims, once said that “a game is a series of interesting choices.” Arc of Alchemist gives you no choices to make. You’ll follow a map marker while mashing a single button from beginning to end. Characters are flat and perversely designed, the story is uninteresting, the voice acting quickly gets annoying, the frame rate will only reach 30 or above in certain menus, the world has nothing interesting to see or do, and the combat is a shortcut to getting carpal tunnel. The best thing I can say about this game is that the music is pretty OK. Well, there is one more good thing to come out of my playthrough of this game: I’m playing Dark Cloud 2 again.

Arc of Alchemist features repetitive combat, tired tropes, an empty world, and a poorly thought out and written story. There is nothing interesting in this package, just skip it.

David is the kind of person to wear his heart on his sleeve. He can find positives in anything, like this is a person who loved Star Fox Zero to death. You’ll see him playing all kinds of games: AAAs, Indies, game jam games, games of all genres, and writing about them! Here. On this website. When not writing or playing games, you can find David making music, games, or enjoying a good book. David’s favorite games include NieR: Automata, Mother 3, and Gravity Rush.
Related Articles: Arc of Alchemist
Share
Tweet
Share
Submit