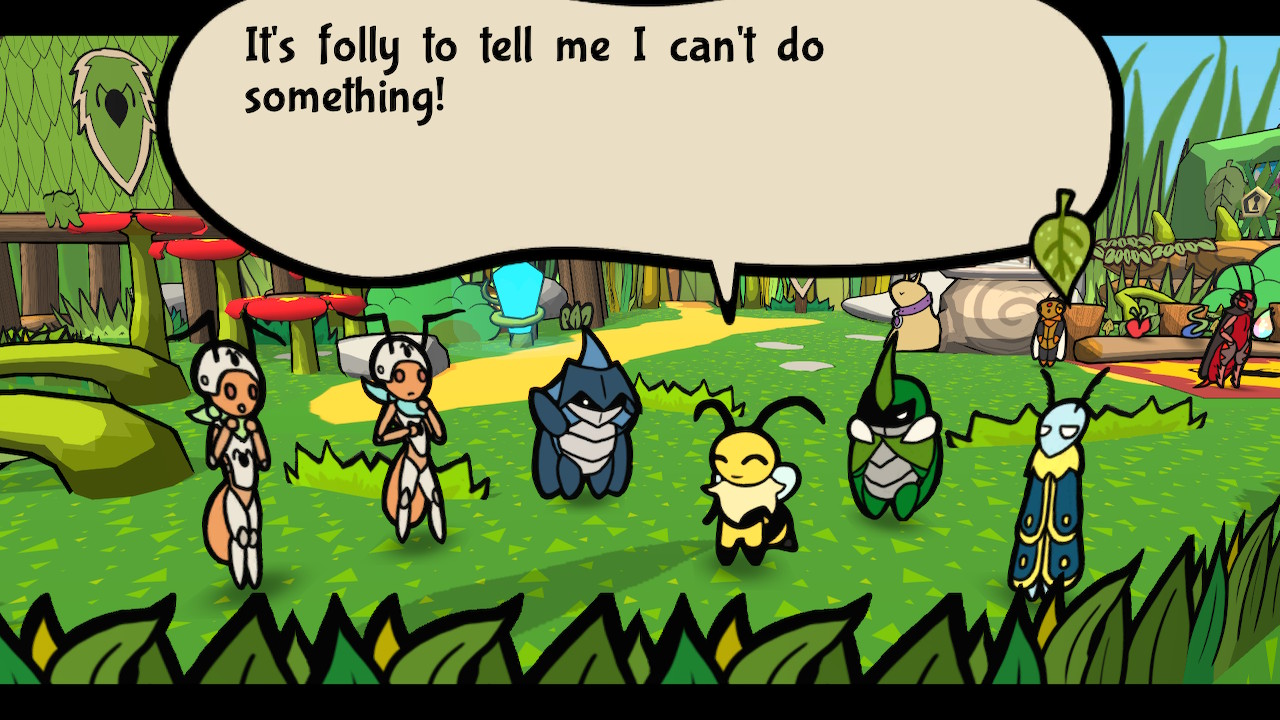 It’s often said that imitation is the sincerest form of flattery, but there’s something else to be said by something that imitates and then expands to become something almost greater than its own inspiration. That’s how I feel about Bug Fables: The Everlasting Sapling, Moonsprout Games’ love letter to the Paper Mario series. More accurately, it’s inspired by the first two games in the series, Paper Mario and Paper Mario: The Thousand Year Door. 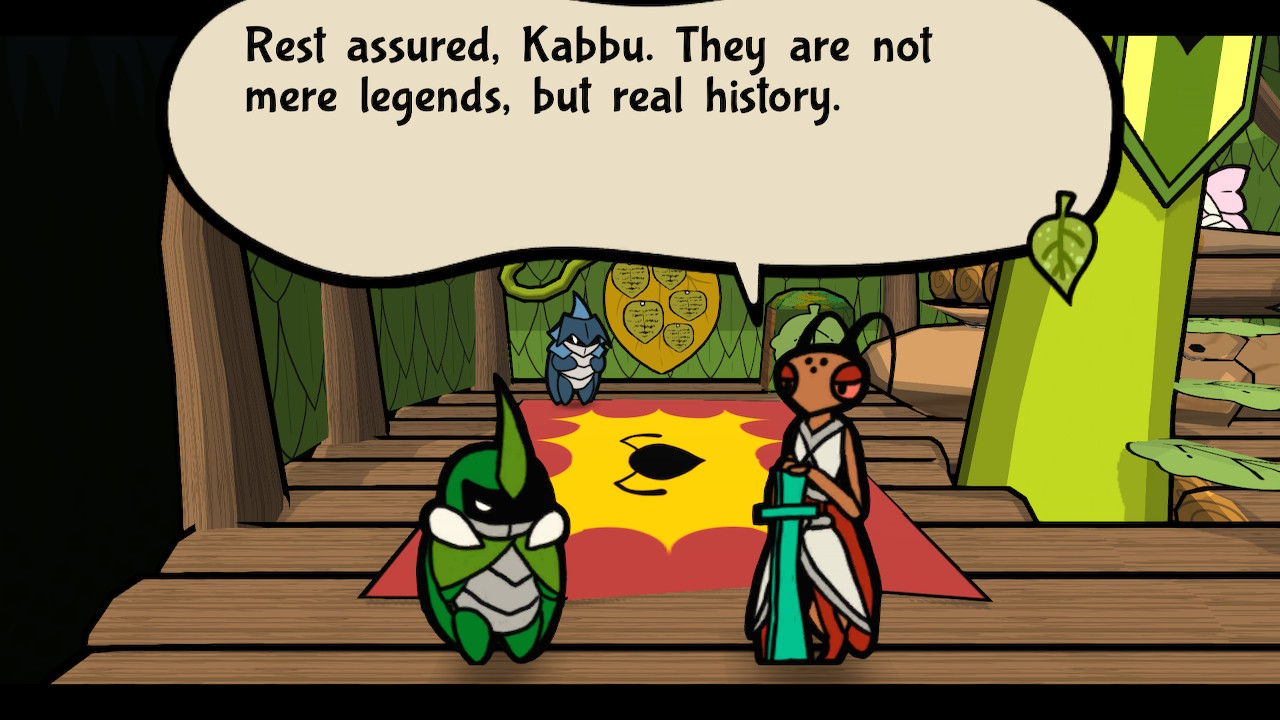 The inspiration is clearly there from the art style to the battle system, and Moonsprout Games doesn’t even try to hide it. Like its inspiration, it’s a turn-based RPG with real time mechanics where you do certain commands to make your hits stronger and hit a button at the correct time to avoid taking damage. There are different skills you learn over time and enemies have different weaknesses, also similar to the Paper Mario franchise. 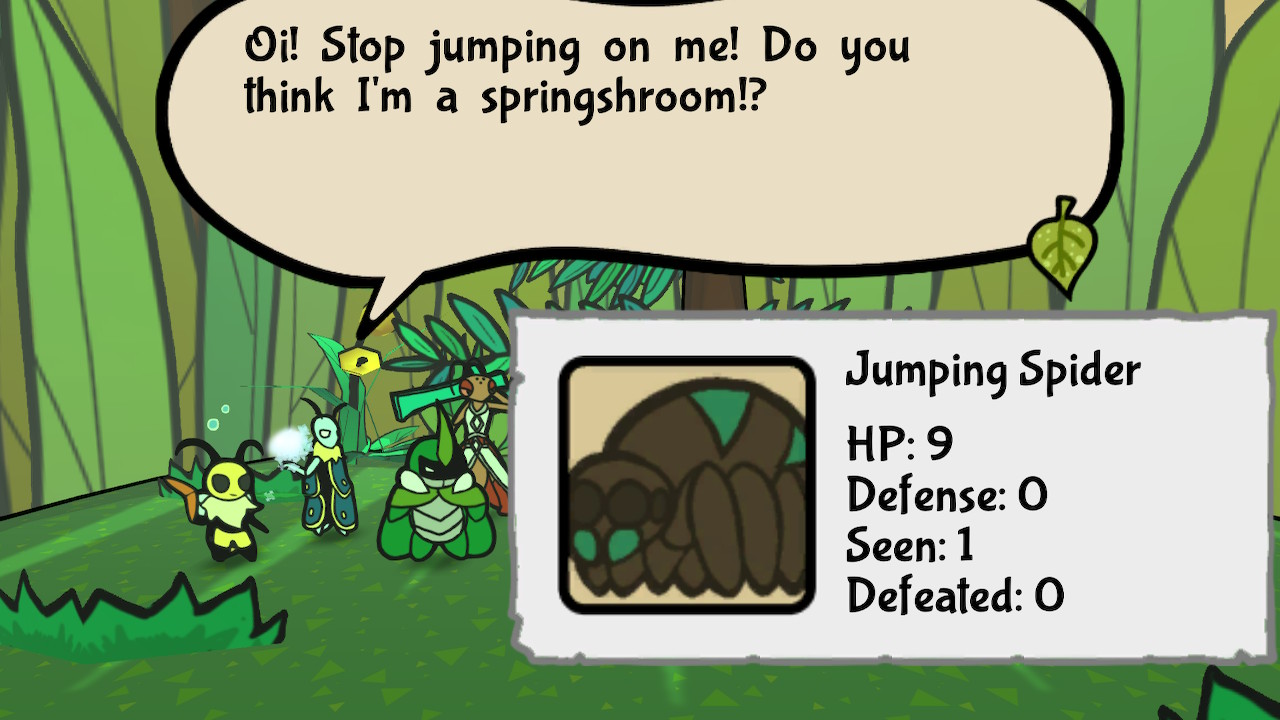 While Paper Mario had “tattle” from one ally, everyone in Bug Fables can “spy” to get enemy info and health.

And between the core concept of the battle system and the paper aesthetics, that’s where the similarities end. Bug Fables is extremely quick to find its own identity, and part of that is with its worldbuilding and battle system. Shortly into playing the game, you’ll run into your third party member and unlike Paper Mario where you could only have two out at a time (Mario and an ally), all three will always be on the field. 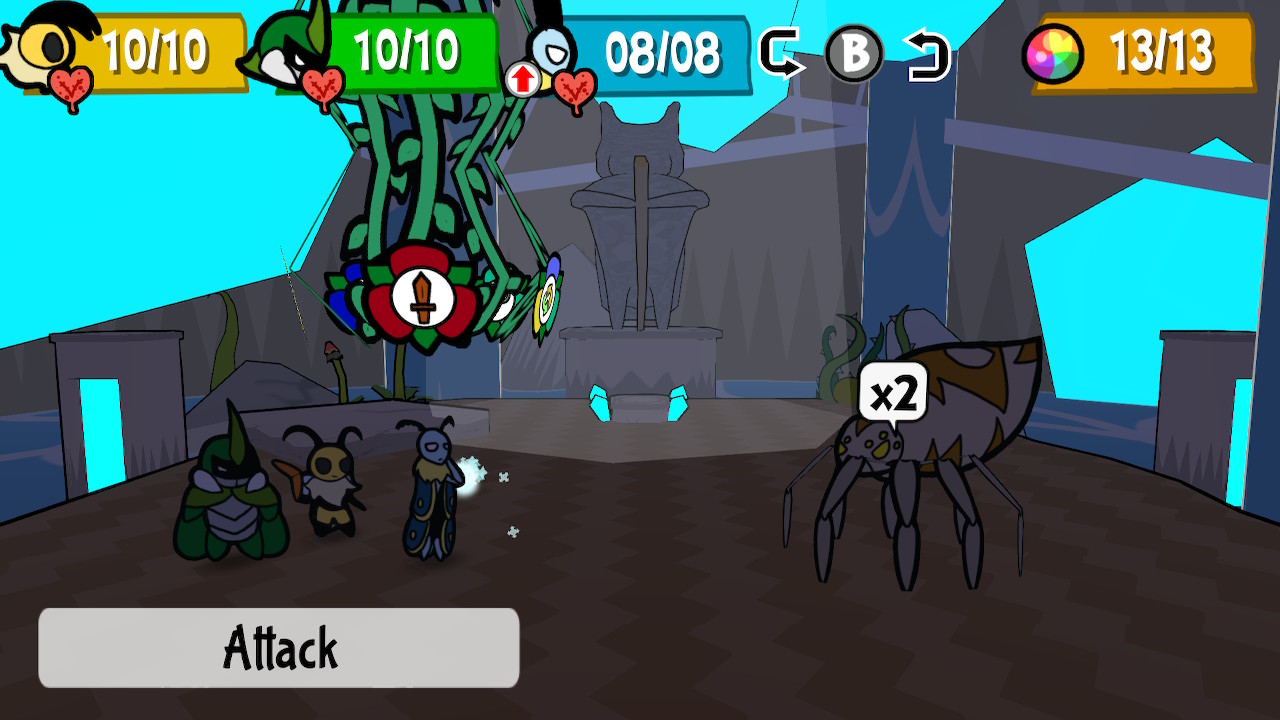 As Leif is in front, he’s going to do +1 damage, but the Spider is also going to target him more.

There’s more strategy to the battle system from this point on. You can change the positions of the party with X, but you can also choose to attack as a different party member in any order with B. You aren’t locked into going front to back, you can fight any way you choose. You’re also able to give an ally’s turn to someone else at the cost of one less damage output. The ally in front will also get one bonus attack boost with the caveat of being targeted by enemies more often.

Since each ally has their own way of attacking, some foes can only be hit by certain attacks. For example, if you have Kabbu, the beetle, in front, but the enemy is a flying enemy, you can use Vi, the bee, to throw her “beemerang” at the flying enemy to knock them onto the ground then switch to Kabbu, who is in front, to smack them. If an enemy is hiding underground, Leif, the moth, can use magic to pull them out of the ground, leaving other allies to strike it. 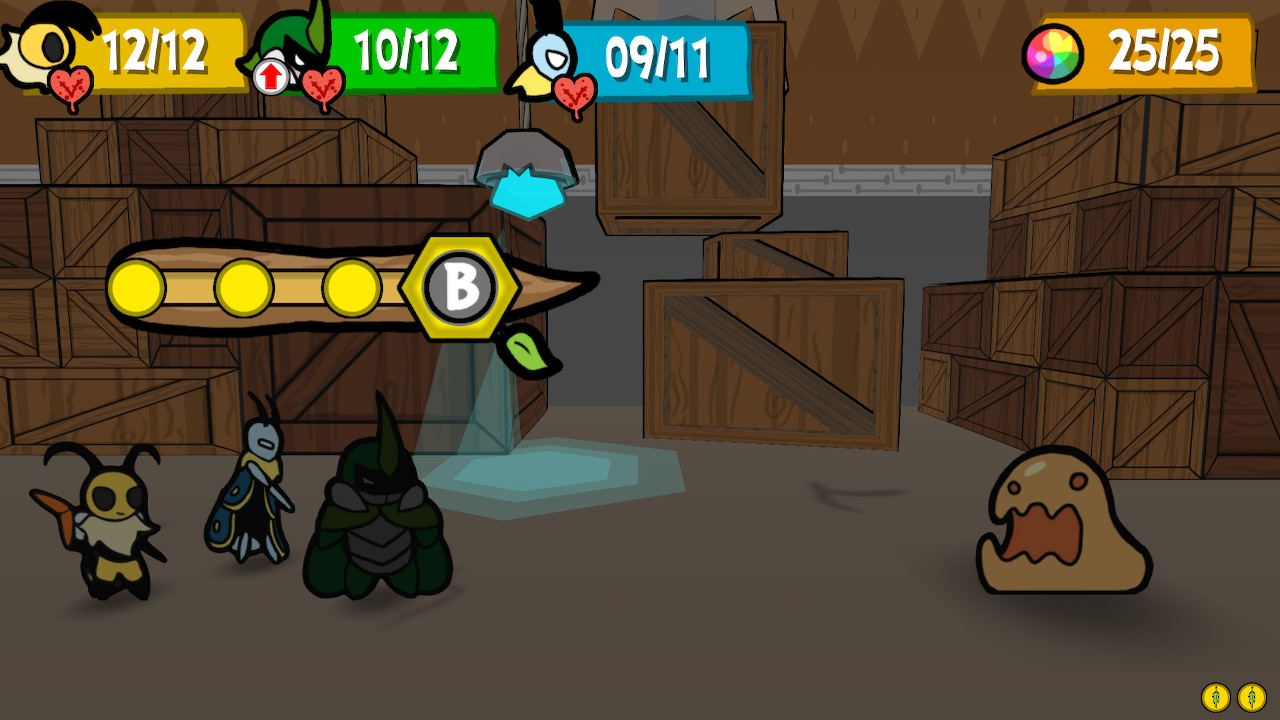 Leif’s attack has you pressing the correct button at the end of the countdown. If this enemy was hiding underground he’d be in a world of pain.

Enemies are exploring the overworld as well, and if you strike them before running into them, you will get an extra turn on the ally you are controlling. If the enemy ends up being unfavorable in your current position, you can give the extra turn to another ally and change the order to put that ally in front and give them the extra boost in attack. It sounds complicated, but you’ll get the hang of it fairly quickly.

But, just who are these heroes I have named, and who is the main character? The story of Bug Fables: The Everlasting Sapling begins with Kabbu and Vi, who want to become explorers. They quickly run into Leif, who joins their party. Bug Fables is very particular about there not being a singular main character, as you can have any of the three lead the party, and they’ll have their own abilities as well to solve puzzles in the overworld. 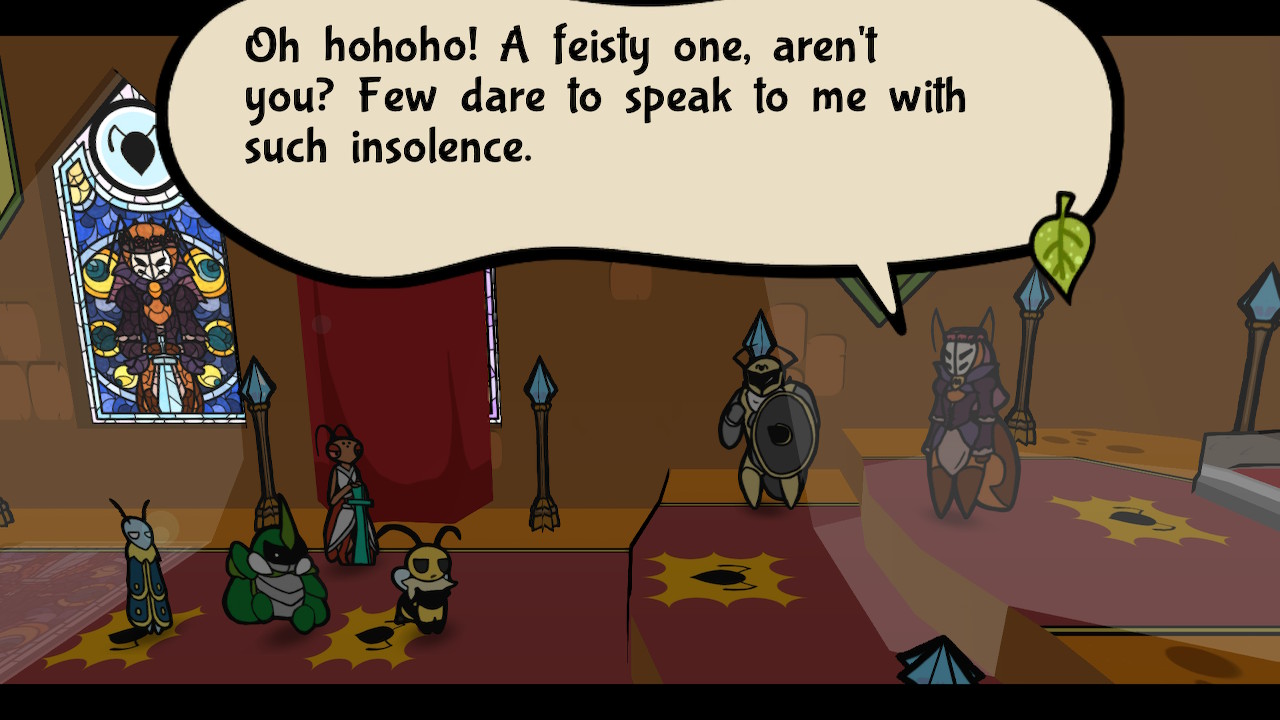 This is a good example of Vi’s character. She’d be the kind of person to call the queen “dude.”

Bug Fables uses its three protagonists to its potential, which is something Paper Mario was unable to do. In the first two Paper Mario games, Mario is silent while all of the talking is done by whichever ally is with him at the time. By having three protagonists all out at the same time, they have a dynamic that turns them from paper-thin characters into well-rounded individuals.

We have Kabbu, the lawful good member of the team, who is all about justice and helping others, but deep down he’s a big nerd that was inspired by the “Bug Rangers,” a group of stage play heroes. Next is Vi, the chaotic good member of the team with a short temper and a bit of a greedy need at the start. She’s still happy to help out, but she prefers to be rewarded for her efforts. And finally, there’s Leif, the neutral good on the team. Once he gets comfortable with the team, his dry insight with other characters is nothing short of hilarious. I was fully expecting him to be a proper and snooty character with how he says “we” instead of “I,” but he ended up being just what Kabbu and Vi needed to complete the team. His backstory is a mystery, but it led to one of the most satisfying sidequests I’ve ever seen. 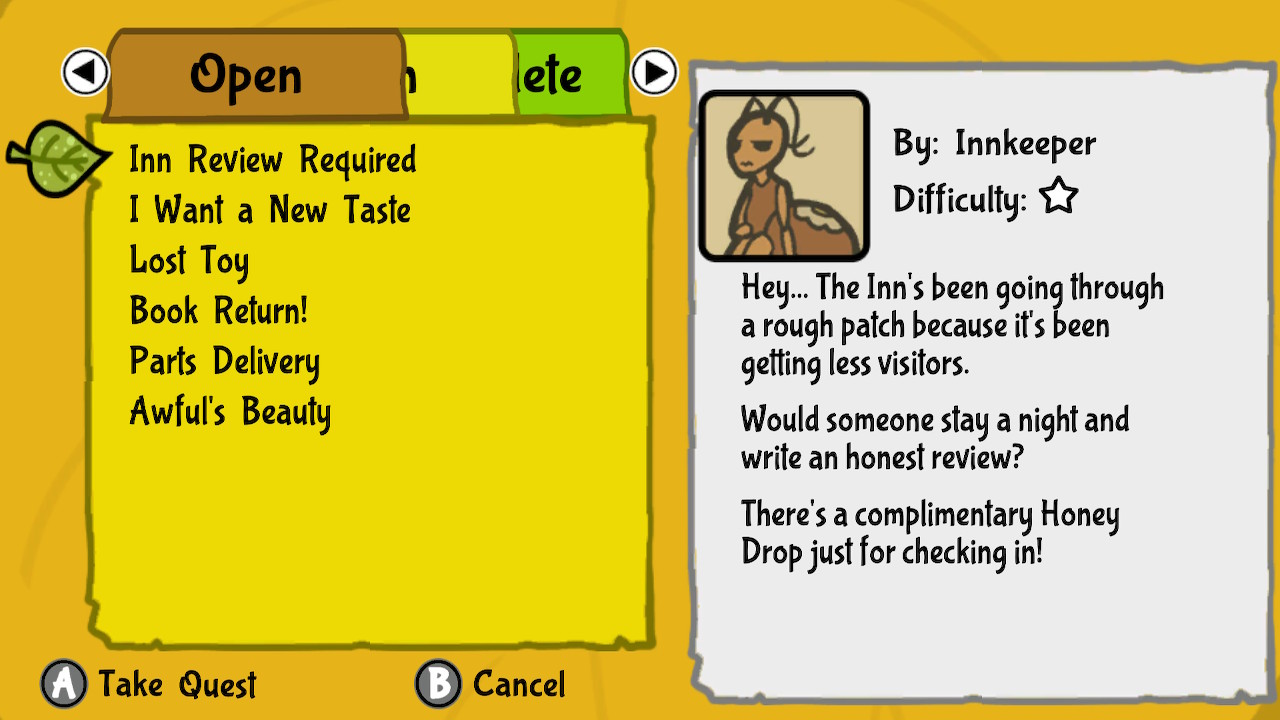 You’re lulled into a false sense of security by being given an easy task, but soon you’ll be fighting giant plants and monsters.

Like Paper Mario: The Thousand Year Door, Bug Fables has a board with requests to complete. There is far more effort into these requests than I was expecting, often leading to optional bosses and new locations. If you’re going to give this game a shot, you absolutely have to do the requests. They rarely ever feel like a chore, and if the reward isn’t great, you’re at least treated with wholesome character interaction that helps build out the world. 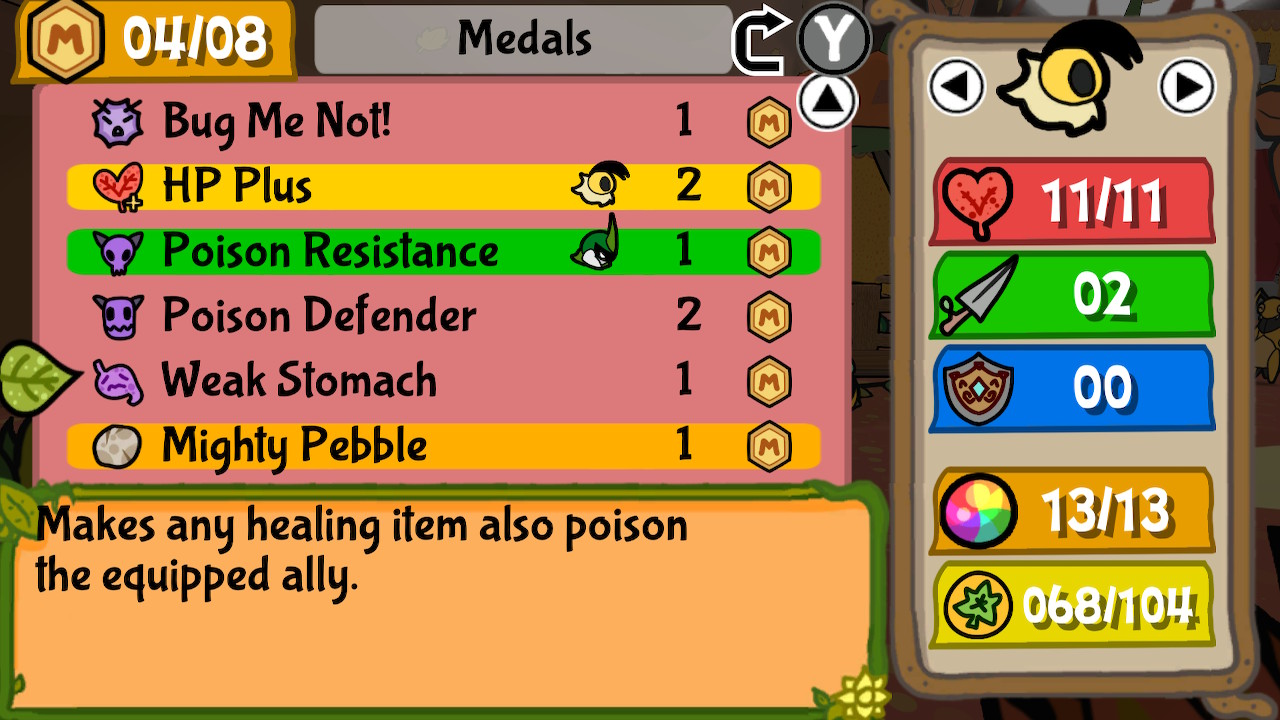 With all these medals around buffs to poisoned allies, it makes me wonder if they actually made being poisoned advantageous.

A lot of the requests give out medals, which is the badge system of the game. As you level up your team, you can choose to give everyone an extra health point, +3 team points for skills, or +3 medal points for, well, medals. These medals can give a buff to characters in a certain position, or protect them against poison, numbness, or sleep. It’s good to experiment with medals when you can, as they can get you out of sticky situations.

Some people might be disappointed that there are only three characters to play as in Bug Fables, but with how much character development is given to each of them, I don’t necessarily mind it. It’s difficult to develop your characters when they’re only there for a single chapter. Each ally is given new skills as you progress as well, usually related to something they learn in the overworld to solve new puzzles. 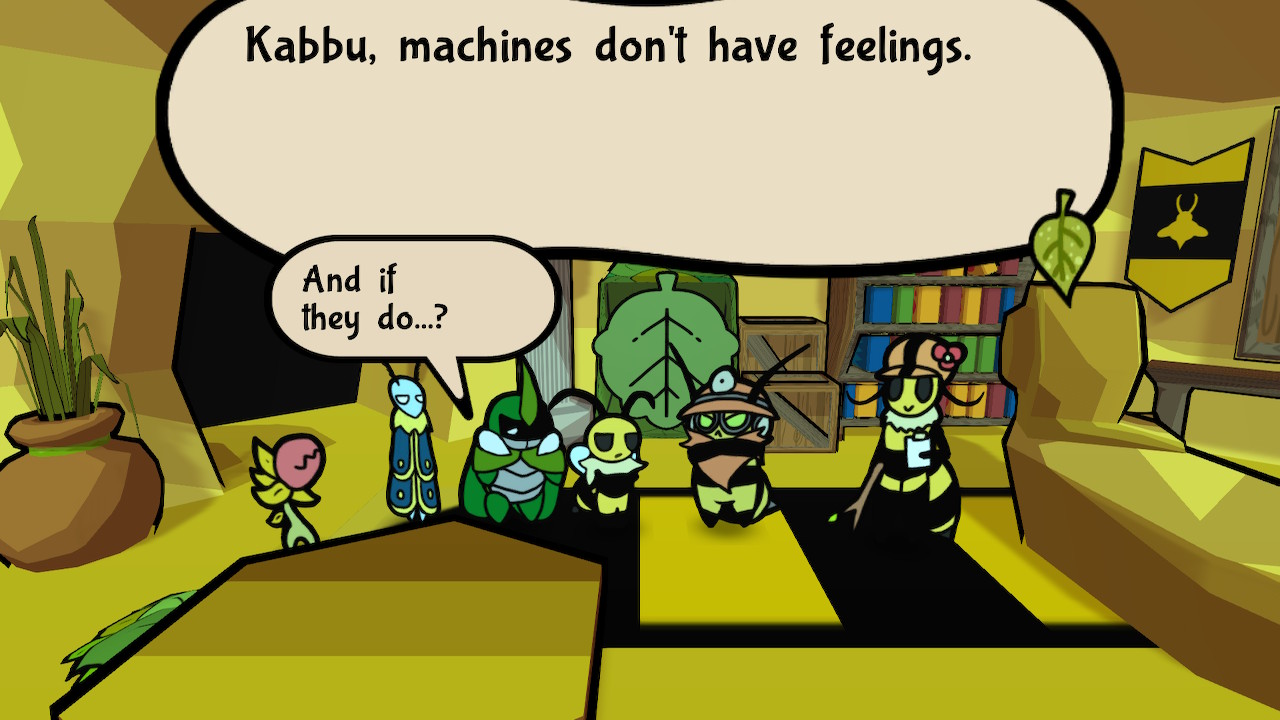 There are puzzles in the dungeons that had me stumped for a little while. The game really tries to drill into your head a new mechanic before combining it with other mechanics. I only wish that they could map some of the new moves you learn to buttons other than B. Having two moves on one button dependent on whether you tap twice or not can lead to frustrating situations where I have to start the puzzle over, and it would be a simple fix. 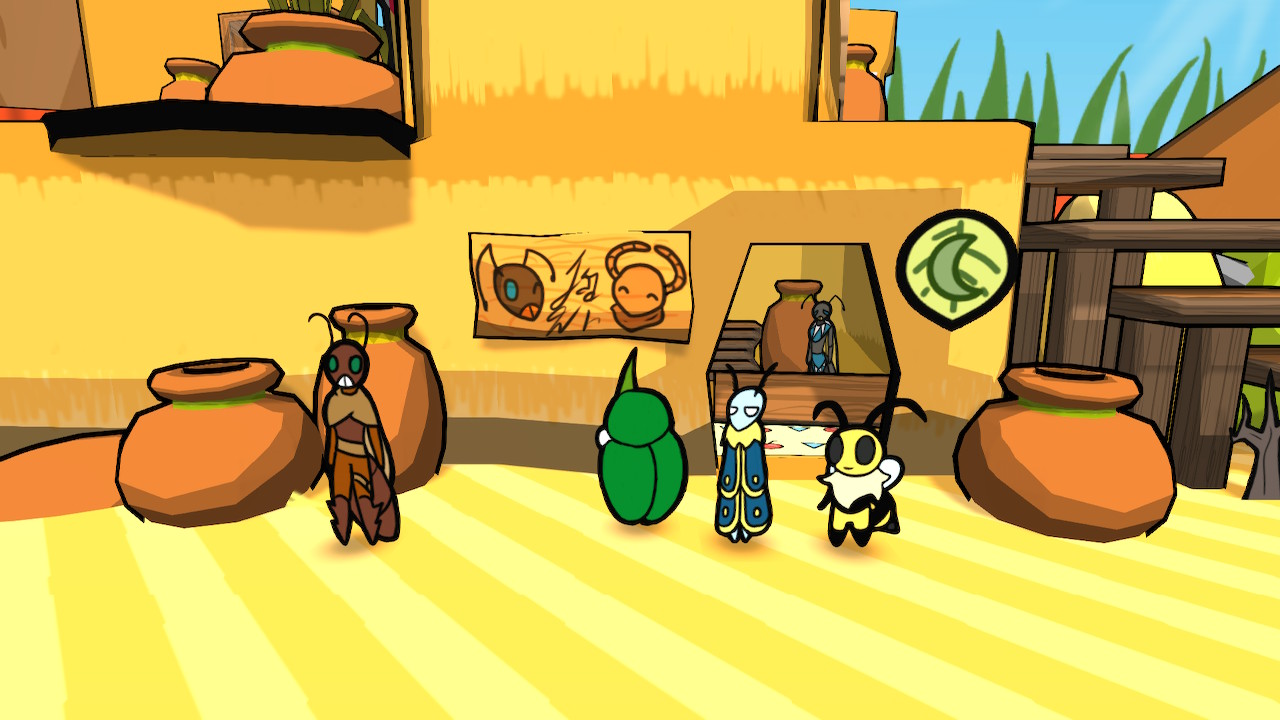 Upon visiting this inn, the sign shows two bugs, but there’s only one working there. You piece together why the guy is so sad before you even have a chance to do anything about it.

I’ve talked about sidequests and the characters, but what about the main story itself? It revolves around the Everlasting Sapling, a relic that grants immortality to anyone that eats just one of its leaves. Vi, Kabbu, and Leif travel around to different parts of Bugaria to find artifacts that’ll give them access to the Everlasting Sapling before it falls into the wrong hands. The story itself isn’t anything deep or thought provoking, which is why the depth of the characters is appreciated in fleshing out the narrative. 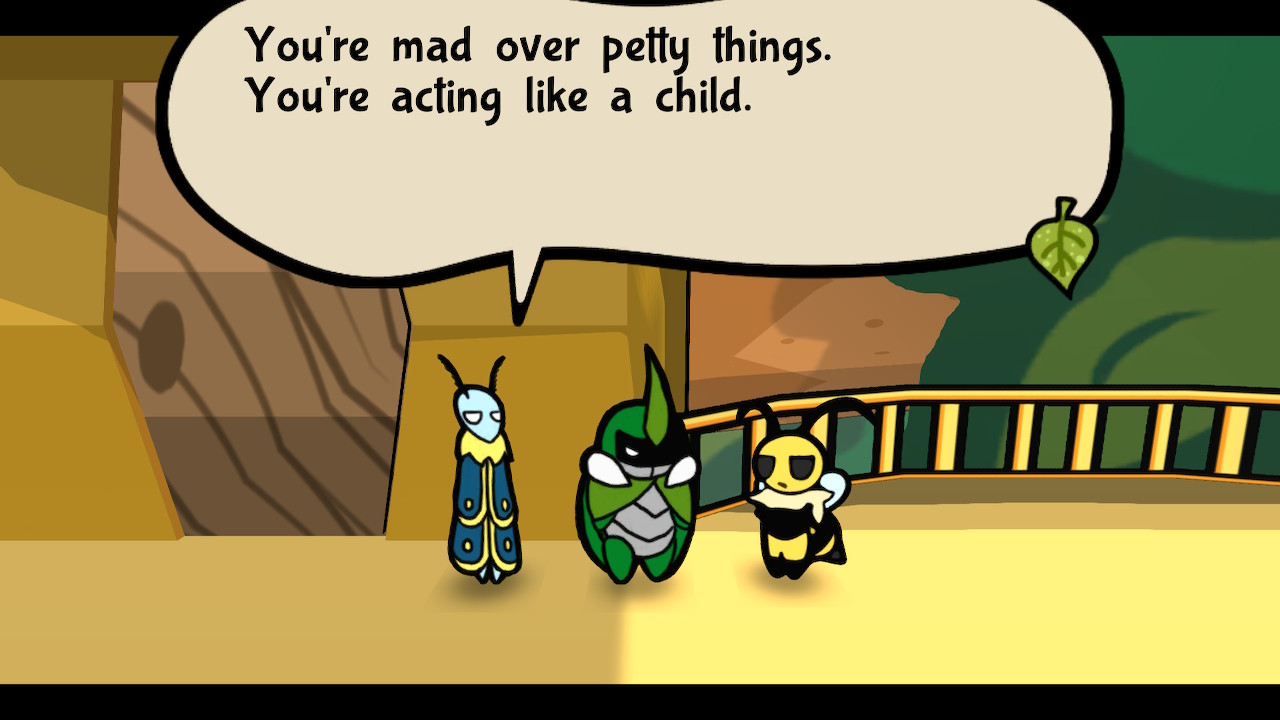 There are other distractions hidden around Bugaria as well. There are a few minigames such as a card battle system and bug whacking, and you’re able to refight any bosses and mid-bosses you beat before. The game also gives you a “Hard Mode” medal immediately for anyone that wants to have a challenging experience out of the gate. I personally rarely used the Hard Mode medal, and there were still a few points where the game challenged me. Without going for all of the medals, crystal berries, and recipes, the game took me 35 hours to beat, which is great considering it’s starting out at $25. 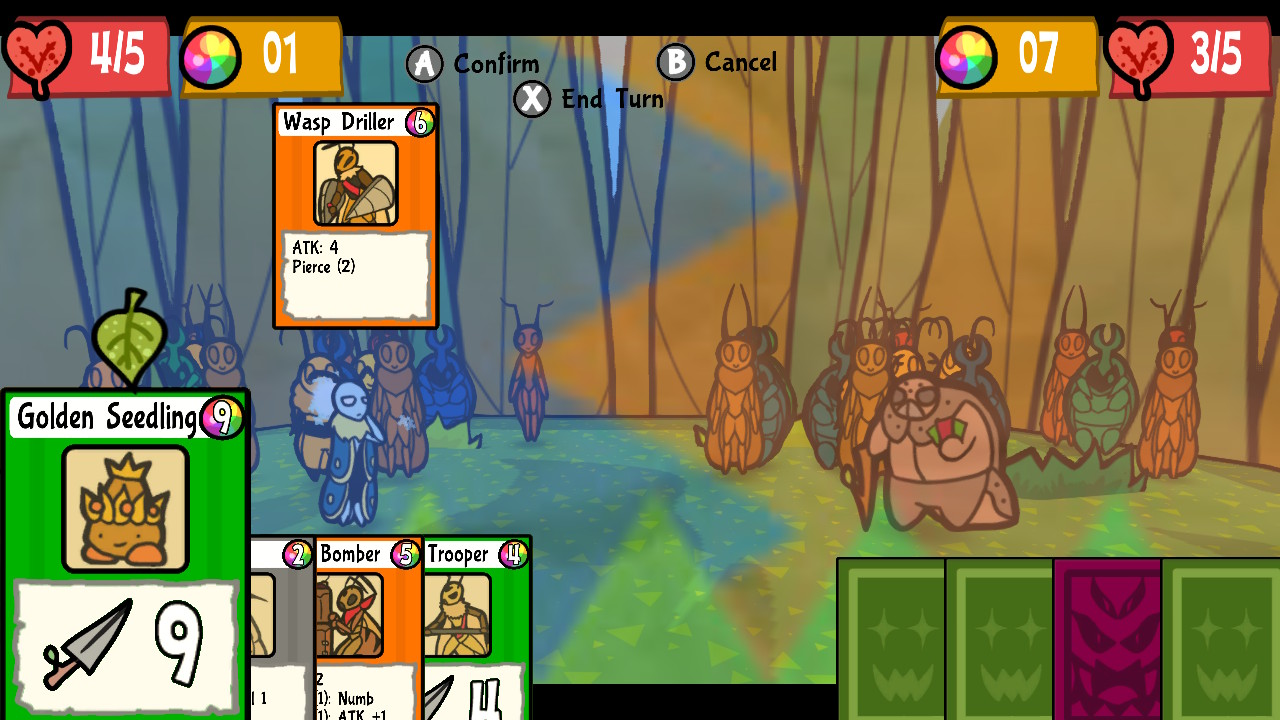 This game also features card battles. The good kind though, not the kind that needs color added.

Bug Fables: The Everlasting Sapling more than scratches that Paper Mario itch, it creates an entirely new dermatological disease that’ll require a “Bug Fables” itch to be scratched every once in a while. It proved that you can take great inspiration from something, shamelessly use it, and blow it out of the water in various ways. The fact that a small indie RPG can stand on its own compared to a Nintendo classic is unfathomable. I only hope that this isn’t the last we see of Kabbu, Vi, and Leif.

Bug Fables: The Everlasting Sapling is the Paper Mario we’ve been waiting for for over fifteen years. It’s aesthetically pleasing to look at, the main characters have an amusing dynamic, and it has a fun turn-based battle system with real time elements and strategy. I urge not only Paper Mario fans to give it the chance it deserves, but anyone that has ever picked up an RPG.

Sean Anthony likes to combine two of his passions: gaming and writing. Gaming has been a huge part of his life ever since he played his first game as a child, Kirby's Adventure. He aspires to have his name attached to an article that makes the whole world go, "Huh, that's neat, I guess."
Related Articles: Bug Fables: The Everlasting Sapling
Share
Tweet
Share
Submit