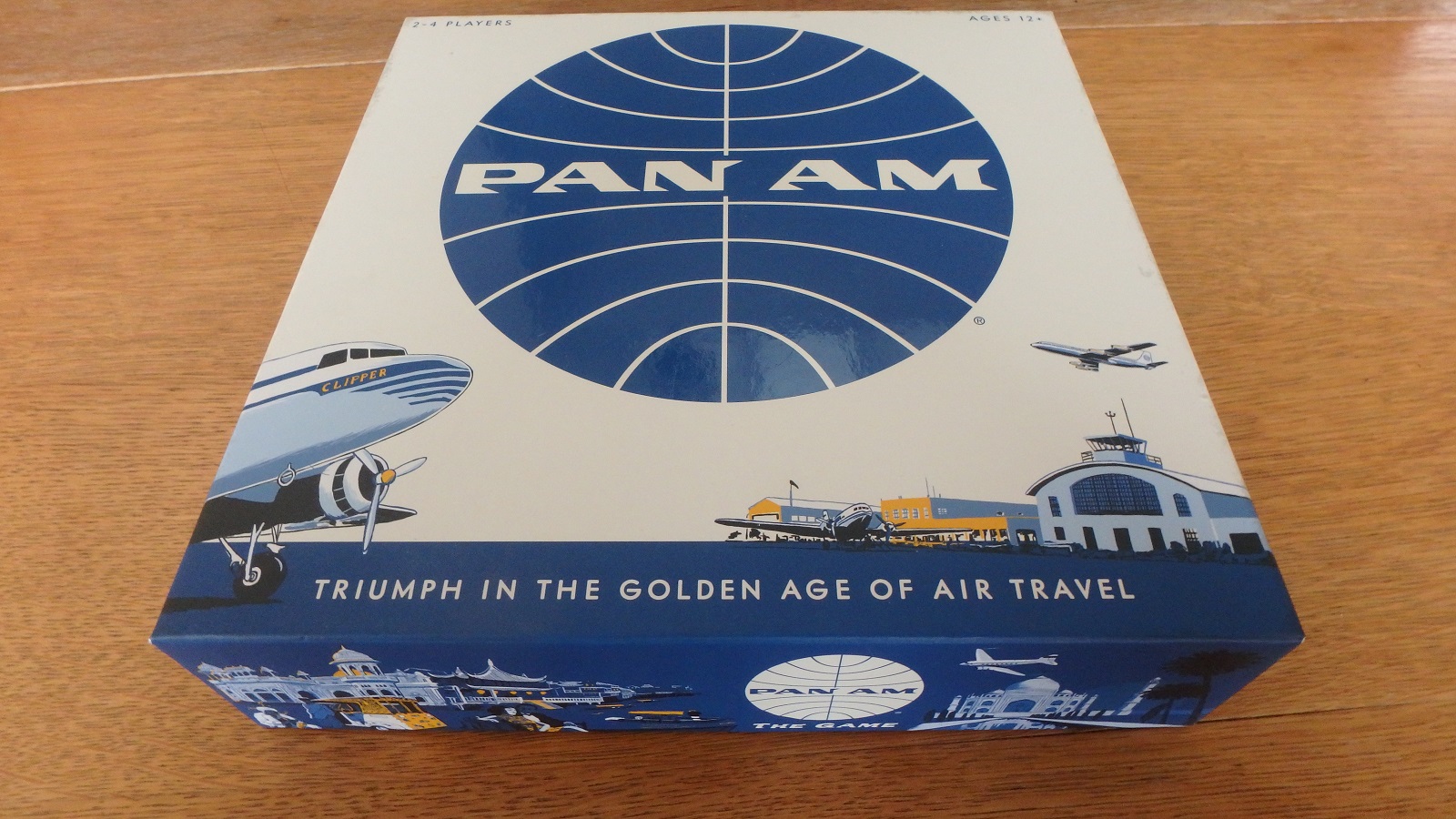 For too long, Lords of Waterdeep was held up as the king of introductory worker placement games. I always felt weird about it, though; while it has a simplicity and straightforwardness that makes it seem good for people new to the scene, there isn’t really much room for player agency, and seasoned gamers can just sleepwalk through it. However, I had a hard time coming up with games to counter with, since every other worker placement I played felt a bit too punishing or complex to put in front of new blood. Turns out, I was waiting for Pan Am.

In Pan Am, players will be purchasing airports, destination cards, and planes, all in the name of claiming routes on the main board. These routes are how players earn money to buy stock in Pan Am, which serve as the game’s victory points. Of course, you don’t just get to slap a worker down and buy whatever you want- most of the spaces on the board are actually miniature auctions. In a system that veterans of Cyclades or Lancaster will recognize, anyone that really wants to take the action you claimed earlier can simply swoop in and bid heavier, knocking your worker off the track. You can guarantee your dominance on a space by placing maximum bids, but do you really want to spend six dollars on Rome when you can potentially get it for free, especially in a round where Pan Am stocks are only three dollars? This mechanic constantly forces players into making tough decisions on how to spend their money, if they put in the effort to develop their airline or blow it on stocks when they’re cheap in the early game. 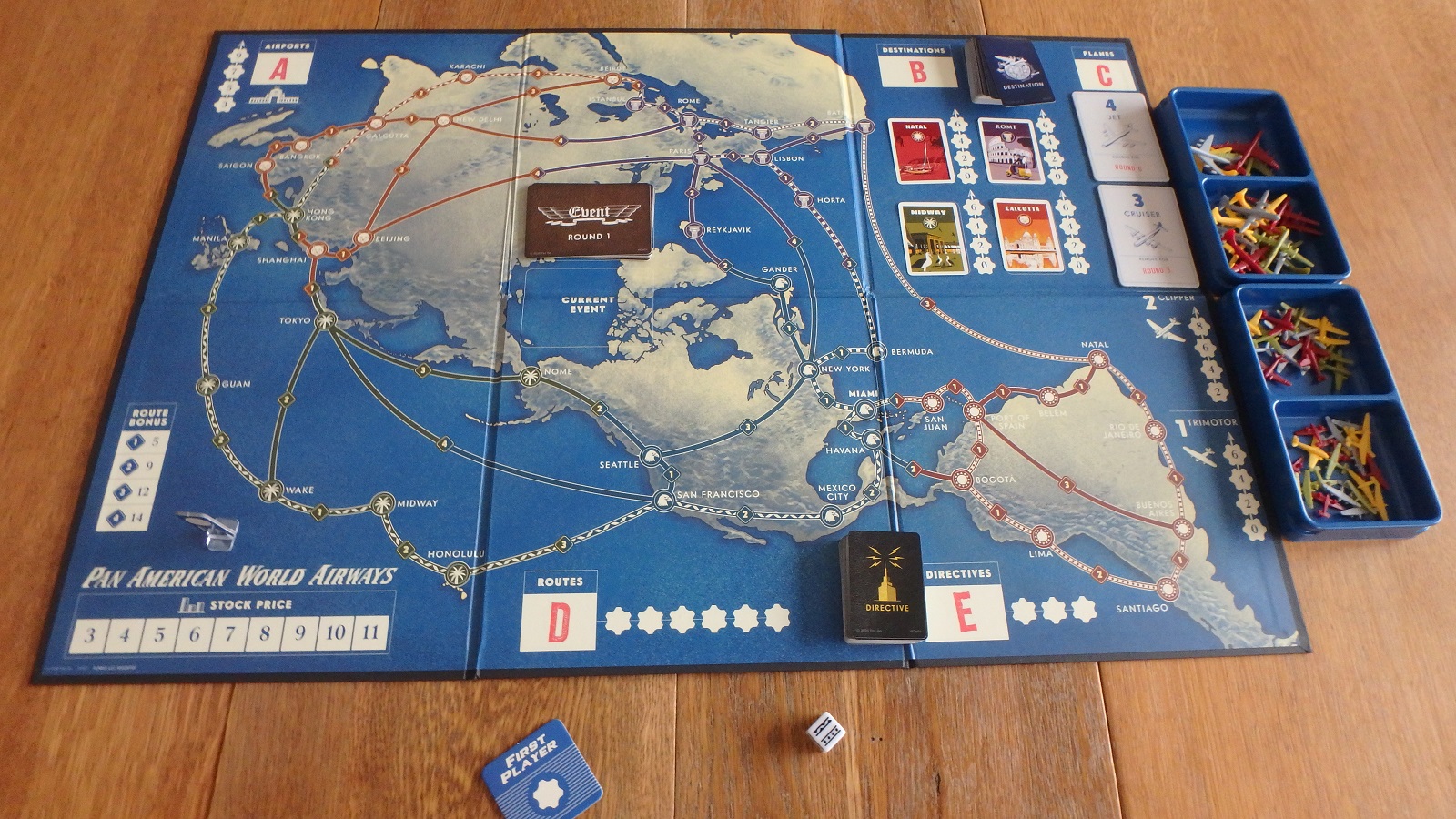 If it stopped there, Pan Am would be a perfectly serviceable introductory game. A worker placement version of Ticket to Ride, where you get the stuff to pop your airplanes on the board to claim the routes to increase your income to buy victory points. But this isn’t Ticket to Fly, this is Pan Am, and Pan Am isn’t here to play around. See, before everyone takes their income for the round, Pan Am will expand. You roll the expansion die a set number of times, and then Pan Am expands out from Miami on any number of the game’s three tracks. Did you have the next route on the path that expanded? Well you don’t anymore, that’s Pan Am’s route now. Your plane that was sitting on that route gets returned to your fleet, usurped by a Pan Am chit, and your income goes back down like you had never claimed that route in the first place. All isn’t lost though; Pan Am gives you a hefty chunk of cash for your trouble, which you can turn around and invest in more stocks, planes, destinations, or airports, so you can turn around and nab the next route Pan Am will gobble up in its nonstop creep across the map.

That brings me to Pan Am’s theming, which it knocks out of the park. This could have easily adopted any of the standard interest-repellant board game themes of trading in the middle ages or whatever but with orcs, zombies, or in space. Instead, it places its players at the head of startup airlines and proceeds to tell an interesting story, with some critiques of capitalism tossed in for good measure. At no point in this game are players interested in creating networks, delivering passengers or goods, or in any other way competing with Pan Am; they’re scrambling over each other to get bought out by Pan Am as completely as possible. Most games end with Pan Am having become a behemoth, the winning player flush with stocks but having almost no board presence, and player airlines left only running strange routes that Pan Am never had any interest in. There is no fighting against Pan Am, with its infinite stores of capital; there is simply getting in its way with the express purpose of transferring some of that capital into your own pockets. All of this is tied together with absolutely gorgeous art, another feather in its cap. 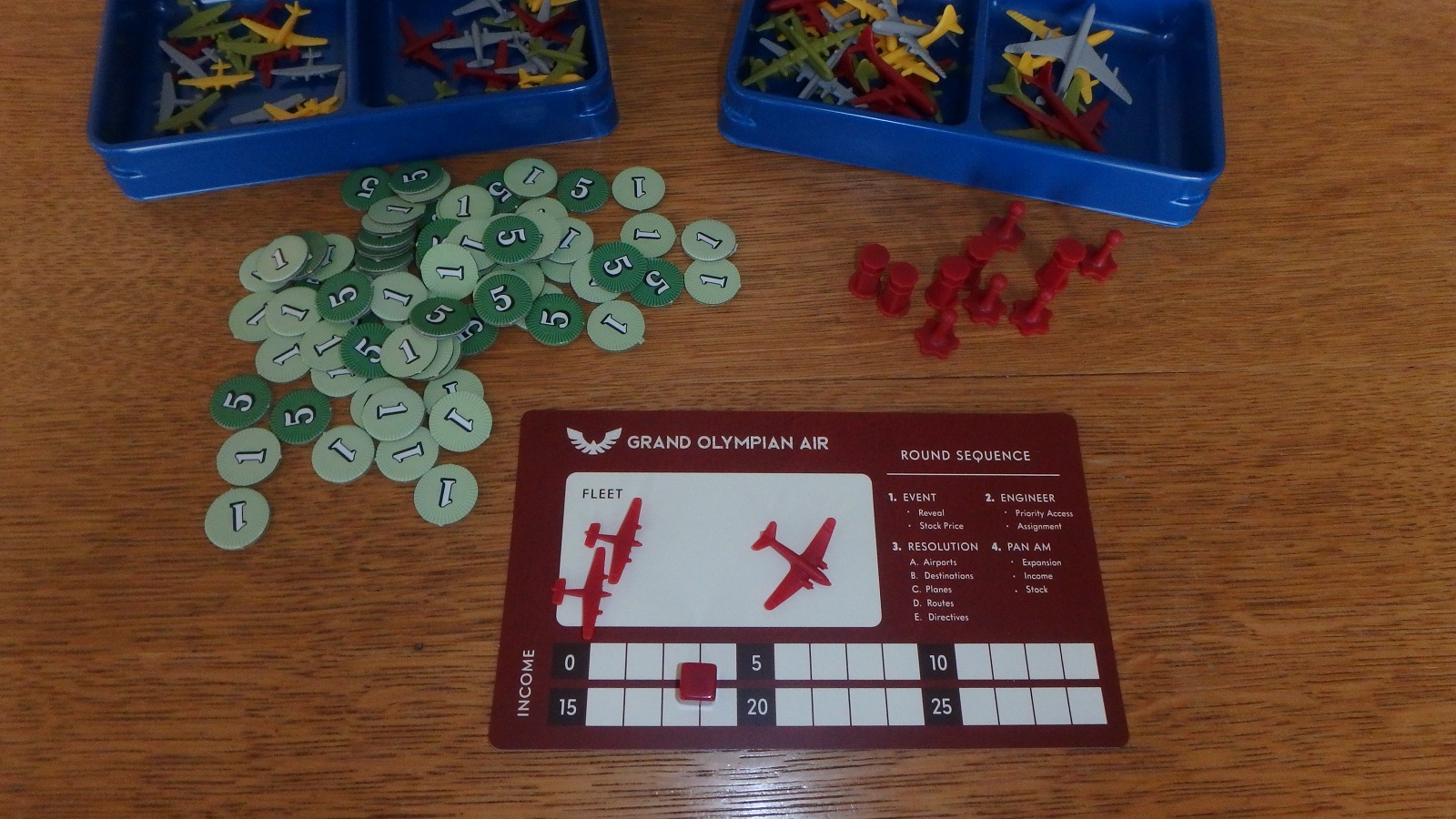 I’m not all effusive praise for Pan Am, though- while the art on the destination cards is wonderful, every other part of this game’s production left me wanting. I realize that it’s almost impossible to make inexpensive board game money that will please everyone, but the ugly punchboard tokens you get won’t please anyone. Aside from the event cards, all the cards in this game are tiny, which is fine for the secret directive cards, I guess? But when you’re trying to figure out what destination cards are on offer and what everyone else already has, you need a telescope because it’s all on cards that have been hit by a shrink ray. Player boards are the same thin cardstock, with the income tracks harkening back to the old days where the slightest nudge of the table sent marker cubes flying. Finally, call me spoiled, but the light plastic playing pieces feel almost anticlimactic when placed on the board to the point that I’m tempted to find a way to cast them in some heavier material to make play feel more satisfying. I realize that the majority of those decisions were made to lower production cost and keep Pan Am’s price point more affordable than most hobby games, but as a consumer I would gladly pay standard price for a game that doesn’t feel so cheap.

I have a few other nitpicks, like how the colors for South America and Asia make their destination cards even harder to discern at a glance, and how the random two destination cards dealt at startup can make it so one player has an easy path to getting a route bought by Pan Am in round one. And honestly, the reduction to three workers per round in the four player game makes the game feel tighter to the point where I personally wouldn’t recommend it at that player count for newer players. That said, I’m happily slotting Pan Am into my collection, and would suggest that you get yourself a copy so you can do the same.

Pan Am is a masterstroke of a worker placement game that is simultaneously light enough to serve as an introductory game and crunchy enough to keep seasoned gamers involved. The production feels cheap, but that’s because the game is cheap, so get yourself a copy.

Nick grew up reading fantasy novels and board game rules for fun, so he accepted he was a dork at an early age. When he's not busy researching the intricacies of a hobby he'll never pick up, Nick can be caught attempting to either cook an edible meal or befriend local crows.
Related Articles: Pan Am, Tabletop
Share
Tweet
Share
Submit