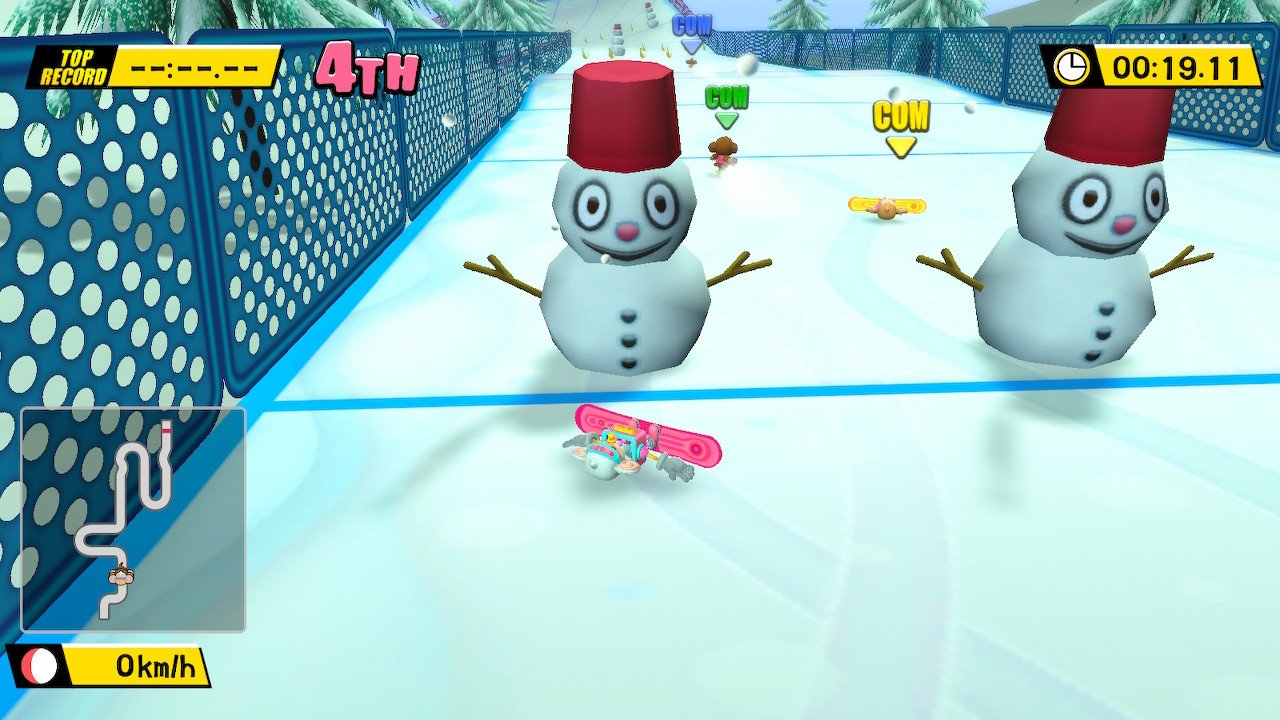 I’m all for remastering games, but for once I want to see titles that had potential and sort of fell flat. For every Shadow of Colossus in the PS2 era we got a Mad Maestro!. (Look, all I’m saying is we should remaster the first two Bubsy games. What could possibly go wrong?) Sega’s Super Monkey Ball: Banana Blitz remains a divisive game, seeing as how its novel mechanics for a Wii launch title devolved into waggling frustration and a bloated list of minigames. Its remaster, Super Monkey Ball: Banana Blitz HD, is an ambitious attempt to bring the nearly 13-year-old game back into the spotlight, with some mixed results. 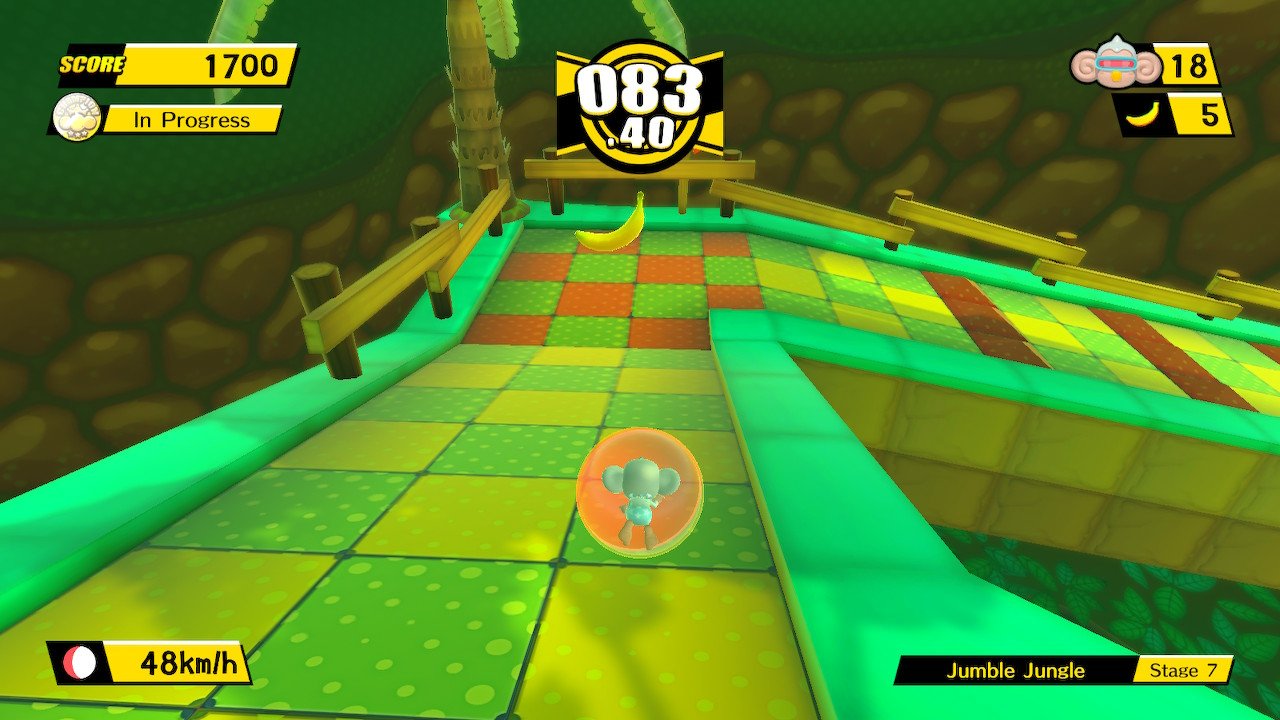 Fresh from the critically-acclaimed GameCube Super Monkey Ball duology (plus some lukewarm handheld titles), Banana Blitz came at a time when motion controls were all the rage. The original title used the Wii remote to its logical conclusion (tilt-based rolling! Minigames that use the speaker!), and also introduced character specific playstyles, like Baby being the lightest and newcomer YanYan’s ability to momentarily float. You control a monkey as you roll across 100 different stages, collecting bananas and trying not to fall into a bottomless abyss that awaits all players. This game also brought jumping to the mix, which caused for a whole lot of finicky errors during the original release, due to the fact that motion controls and a variable jump mechanic aren’t the best in a series that requires precision to survive. All in all, it was an attempt at innovative gameplay that had some less-than-desirable results.

In contrast, Super Monkey Ball: Banana Blitz HD eschews motion controls for more subdued analog ones. The game is exclusively played through a regular old control analog stick whether you play with a single Joy-Con, grip, or pro controller. This results in tighter controls that I would say trivializes the early single-player game. The basic Super Monkey Ball gameplay is retained thanks to these controls, and I instantly enjoyed my time with this new control scheme. I thought that replaying the game would be a breeze.

Then you get to world 6. 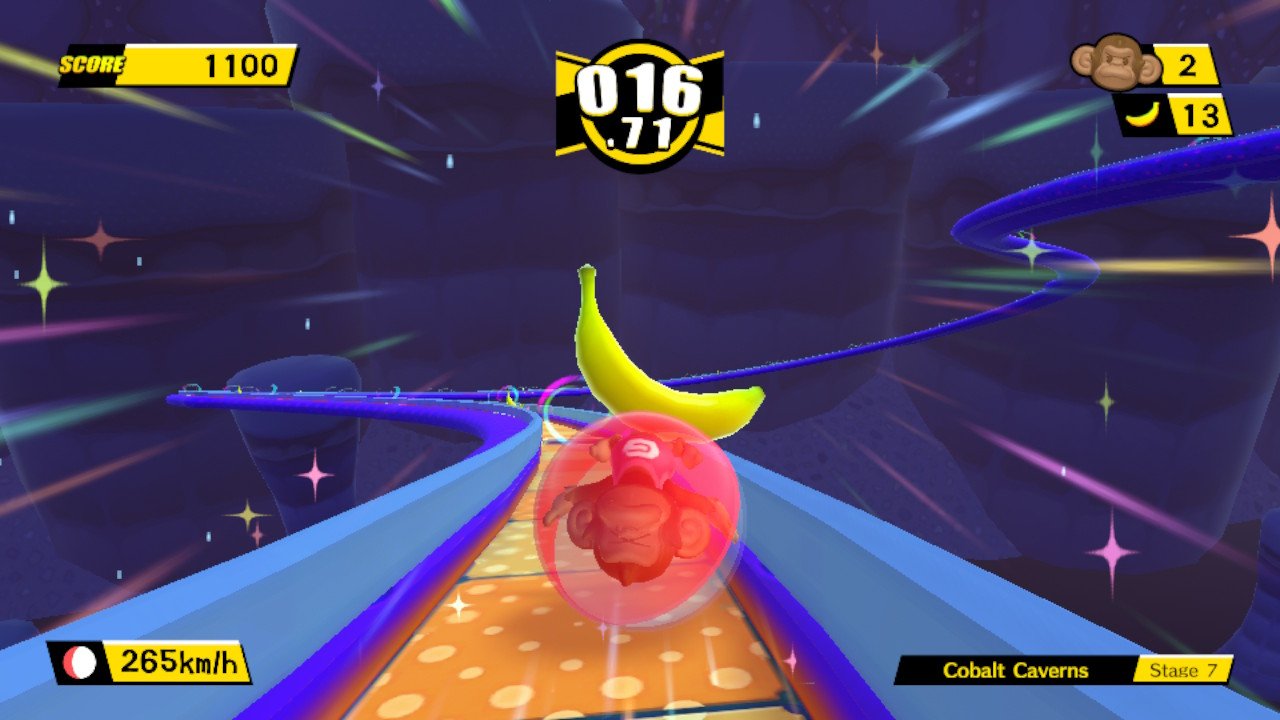 Prepare to fall out a lot from here on out.

Regardless of how cutesy the game presents itself, Super Monkey Ball is a series for masochists and speedrunners who can cut through that one level effortlessly. Just because it’s one of the easier Super Monkey Ball games (…relatively speaking), Banana Blitz HD pulls no punches in its later stages; you obtain champion medals for not getting a game over in a world, and they get exponentially more difficult to get in later worlds. This game does omit level names, but I did start having a tough time near the end of the mid-game stages.

Aside from this, the frustrating boss battles of the original release return, and even though it’s been nearly 13 years, I still have the urge to scream into a pillow. Boss battles here cap each 10-level world, and let me tell you, they aren’t great. You basically have to expose a boss’ weak point by wearing them down or dodging whatever projectiles they hurl at you, but the arenas and controls aren’t conducive to accurately hitting these bosses. The second world’s boss had me put down the game for a day just because of how unfair the physics were in the fight. You have to hit a flying baboon as he sends homing missiles your way. The way that these missiles work means that you’ll spend a while trying to position your monkey to hit the button that will send them back to the boss. Unfortunately, unwieldy camera angles and the fact that one tiny hit will send smaller monkeys flying (don’t try this with Baby, just… don’t), means that you’ll spend a while trying to get on the offensive. Each boss battle after this isn’t too forgiving either, from a yeti that has a smaller than usual stage where you can easily fall off to an octopus that can make your life miserable whenever it feels like it. Put simply, the boss battles are still the same old bummers they were before, and it would have been better for them to be done every other world instead of once a world. 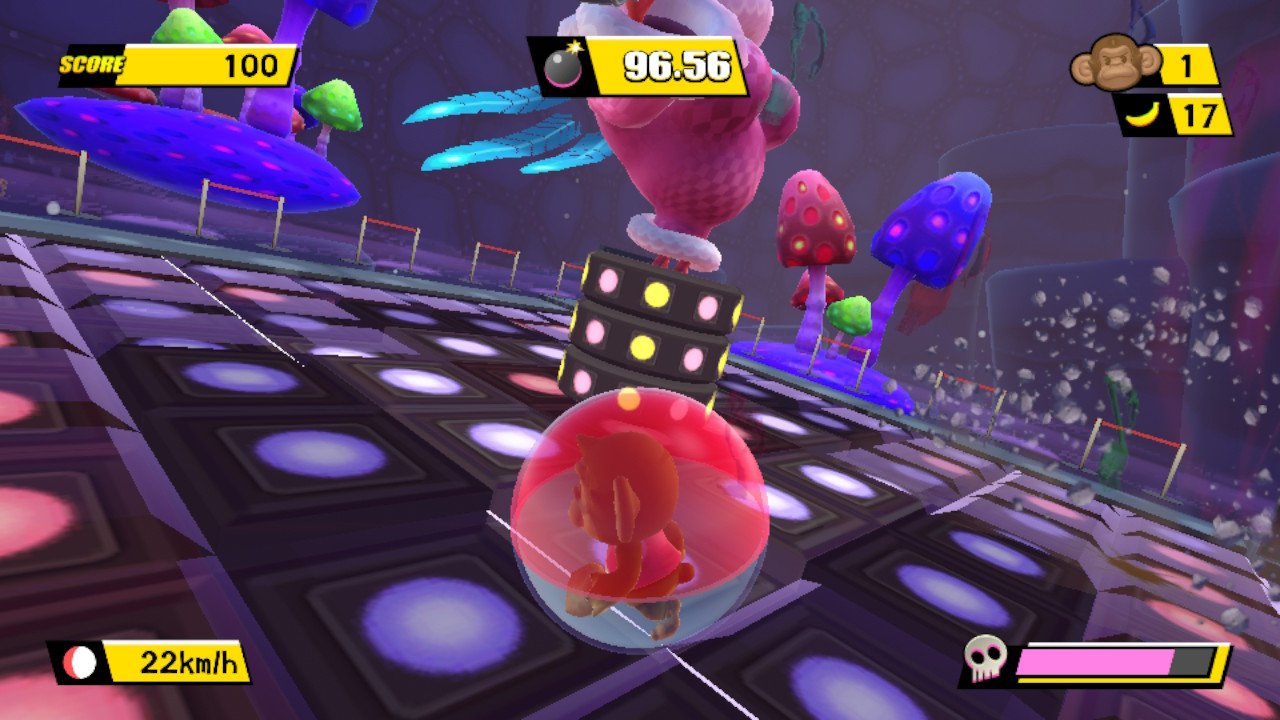 This one ain’t too bad, though.

While the single-player changes are minimal in terms of content (other than a secret character you can unlock if you gotta go fast as well as some adorable costumes for the playable cast), I really love the overall polish of the whole package. It’s a soft and cute artstyle, with everything rendered lovingly in an adorable graphical palette. The technical performance is pretty astounding too, as I retained 60 FPS on handheld mode under most circumstances, which really makes this remaster shine. The updated music is neat too, from the lyric-filled theme song at the start screen to some remastered tracks within. For a single-player experience, this is a great remaster, and I wish that Sega would take consideration in giving the GameCube Super Monkey Ball games (or Deluxe) the same treatment.

And here’s where this review takes a turn for the worst. While the single-player is a treat (for the most part), the multiplayer aspects are decidingly disappointing. For starters, Banana Blitz HD pares the 50 minigame selection from the original release down to 10. Sure, there were some stinkers in the original, but they were basically there to act as a tech demo for the Nintendo Wii. I wouldn’t be upset at this decision if the games represented were any good, but here’s the thing: they’re not. Monkey Target (which is the Super Monkey Ball minigame that’s been there since day one) suffers from a weird physics engine that always messes up and doesn’t give your monkey enough mileage to get anywhere.

It’s also here where the lack of motion controls is apparent. While I could argue that the single-player mode didn’t need them (though I wish they were optional, at least), the motion controls gave the multiplayer mode an identity. I loved using the Wii Remote in the multiplayer sections because I had a ton of fun and looked stupid playing them, which is probably the best compliment for a party game. I can classify these minigames into two groups: games that are functional yet lacking a personality due to analog controls (Seesaw Ball, Space Monkey Attack, Monkey Target, Monkey Snowboard, and Whack-a-Mole), and games that are just boring (Slingshot, Dangerous Route, Hurdle Race, Hammer Throw, and Hovercraft Race). 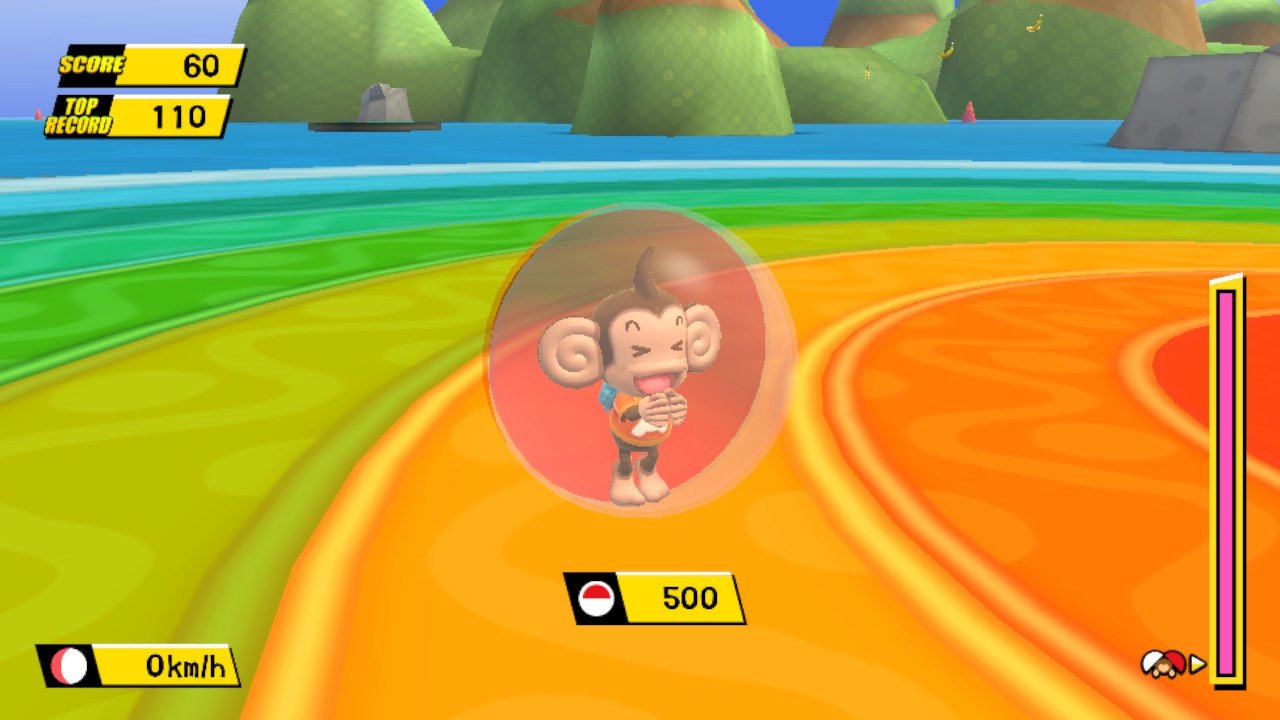 Yeah, I wasn’t smiling too much here.

Special shoutout goes to Dangerous Route, which plays like an even worse version of Wii Banana Blitz due to the fact that the physics here feel like Super Monkey Ball Adventure. (For the uninitiated, this is perhaps the biggest Super Monkey Ball-related insult I can give.) It’s sad to say that there were only two minigames I willingly wanted to play again, and while this is mitigated with the presence of friends, the original games were over pretty quickly, like less than a couple of minutes. In a title with 50 of these experiences, this length is forgivable, but in this remaster? Unacceptable.

Well, there is an online component, but it’s more like Super Mario Party’s “Online Mariothon” mode rather than a full-fledged Super Monkey Ball campaign. (Sidenote: I wish they included an alternating multiplayer stage mode here like the original GameCube games, weird that the Wii version only had the main game in single-player mode.) You basically run through a gauntlet of all 10 minigames, getting a total score at the end and comparing your ranking to others. You can also do this to world courses, which are non-stop gauntlets of the single-player worlds; this will no doubt appeal to speedrunners, but I still wish we could have true online multiplayer (or again, a local multiplayer component of the main game). 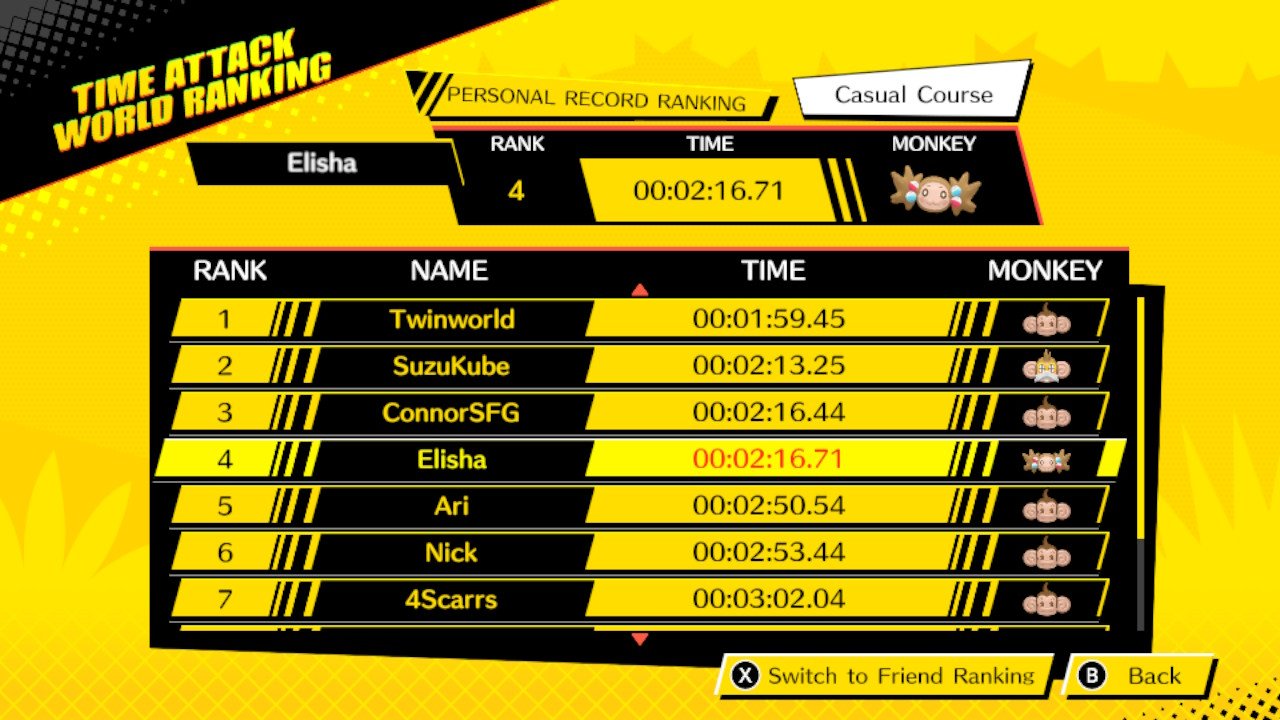 I probably won’t be on this for long, but hey, I’ll take what I can get.

In the end, Super Monkey Ball Banana Blitz HD will satisfy fans with its lovingly new remade visuals and presentation. While the single-player mode is much more improved thanks to analog controls, the new multiplayer elements are drab and will damper your experience should you want something to play with friends. These are some Super Monkey Balls you should probably play with yourself rather than others

Elisha Deogracias is an aspiring accountant by day, freelance writer by night. Before writing for Gaming Trend, he had a small gig on the now defunct Examiner. When not being a third wheel with his best friends on dates or yearning for some closure on Pushing Daisies, he's busy catching up on shonen manga and wacky rhythm games. Mains R.O.B. in Smash. Still doesn't know if he's a kid or a squid.
Related Articles: Super Monkey Ball: Banana Blitz HD
Share
Tweet
Share
Submit