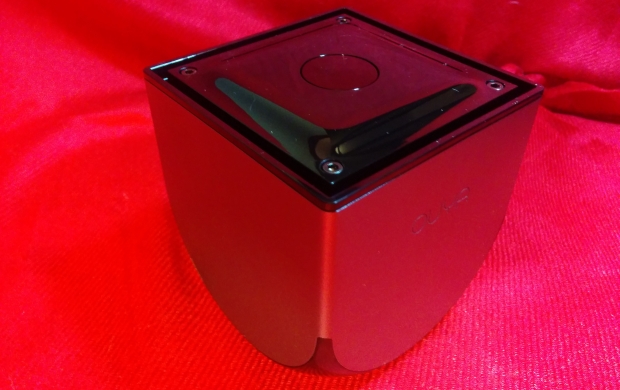 The Ouya was practically the poster child for a gaming revolution.  Neither new console, nor powerful PC, this device would sport a sub-$100 price tag, run Android OS, and usher in “A new kind of video game console”, to use the parlance of the Kickstarter.  The team asked for just shy of a million to get the system out the door and raised a staggering $8.5 million.  The people believed in the Ouya and it launched on June 25th, 2013, but for some reason this revolution didn’t pull me in.  I own a powerful Android tablet and a Nexus 5, so why didn’t this little open-source device pull me in?  Fast forward to now and I decided that it was time to take a look at the little cube that could to see where a little over half a year’s worth of progress has taken it.  Or at least that was my plan.

Every once in a while you’ll tackle a review that could literally be described as a moving target.  We received the Ouya, we tested it out, I wrote a review, then the Oyua shifted gears as well launching a new console with expanded memory.  I retooled my review and then Ouya shifted to a completely new business model.  I was going to put a pin in a review and write it as of May of 2014, but again…the target moved. Here we are in August, we have a big list of upcoming and new games, and where Ouya goes after the posting of this review is anyone’s guess.  Let’s see where the Ouya stands today.

The initial launch of the Ouya was a bit rocky, as has been the case for every new platform I’ve seen at deployment time.  A spartan launch library, some clunky UI elements, and marginal USB storage support were all topics of conversation amongst our readership.  I brushed those growing pains aside and unboxed this tiny wonder.

In the last few months the support for the Ouya has grown.  XBMC and Plex (open source media players), Final Fantasy III, Broken Age, older-generation emulators of all kinds, and the solid effort AVP: Evolution have joined The Bard’s Tale and the freshly-released Chess 2 have bolstered the extensive library.  Even Twitch.tv support has appeared for the device.  All told there are over 1000 applications and games available for the system now, with over 90 more announced for this year thus far.  While some reviewers decried the lack of Google Play integration, clearly the team at Ouya have garnered a great deal of support for their product.  At GDC this year, exclusives like The Duck Game, Reagan Gorbachev, Laza Knitez, Neverending Nightmare, Thralled, Knights and Damsel, and cross-platform titles like That Dragon, Cancer, Whispering Willows, and Cascade were announced.  PC still rules as the indie platform of choice, but the Ouya is clearly becoming more attractive.

The guiding principal of the Ouya was that all games and applications would be free to try at the very least, if not free altogether.  That has held true for the vast majority of titles, offering a time-locked version or a demo for most of the 1000+ titles on the service. Toss in support from Playcast’s Cloud Gaming service (it’s currently in beta) and the potential of AAA title delivery like LEGO Batman, Prince of Persia, Sonic & Sega All-Star Racing, Mirror’s Edge, Super Street Fighter IV, and Frontlines: Fuel of War on the Ouya gives this system some real legs.

There are two things that really limit the Ouya here; the Tegra 3 chipset, and Electronic Arts.  If you want a lesson in what happens when you don’t have EA firmly in your corner, take a look at the Dreamcast.  There are currently no titles like Madden or Dragon Age on the game, offered only through the Playcast service I just mentioned.  Without native support, the system will remain firmly locked into a bit of a niche.

Nothing is worse than dropping connection in the middle of a game, but it’s downright dangerous during a firmware update.  When I first connected the Ouya, I let it connect via WiFi.  Given that my router is two rooms away from my entertainment center, I figured it’d be ok as my phone, tablet, and laptop can connect just fine.  Unfortunately, I think the small form factor of the Ouya resulted in a small antenna for the wireless controller.  While it supports b, g, and wireless n for connectivity, the range seems pretty paltry.  I recommend using a wired connection.  This goes double if you plan to stream media, so let’s get into that. It handled 1080p .mkv files well, but occasionally struggled on 720p .avis, which seems more about codecs, encoding, and XBMC than the capabilities of the Ouya itself.

There have been some solid software updates (more than a dozen in the last year!) for the Ouya, and countless apps delivered to the platform, but none more important than XBMC for the media streaming set.  There are alternatives like MX Player, something I’ve used on my Android tablet for some time, but few look as ‘commercial’ as XBMC.  After a few quick tutorials I had it set up, along with Netflix, and HBO Go.  I’m not sure if any of this is what the Ouya team had planned, but there is no doubt that it’s a hell of a lot quieter than the fans on my obnoxious PlayStation 3.

Much of the platform wars comes down to how much you like or dislike the controller attached to it. The Ouya sports a decent hardware design, not unlike any third-party Xbox 360 controller. The buttons feel springy, the D-Pad is decent enough, and it has roughly the same latency as any Generation 7 console. The triggers are essentially just larger buttons, not shaped like the curved triggers of other controllers, but they do the job. I will give a nod to the battery compartments in the Ouya controller. They have a small strip of cloth to place underneath the battery, saving you from palm-slamming the thing until the batteries fall out. The compartments are located underneath the wings of the controller, leaving it properly balanced without locating a huge battery pair in the center rear like the 360, or leaving it off balanced with batteries on one side. If you’ve ever used a Mad Catz, Razer, or any other third party controller, you have the right idea – it’s serviceable, but with it’s own share of ergonomic quirks. There is one caveat though…my controller shipped with a bad right bumper. If you press really hard near the top of the controller it’ll work, but that’s hardly optimal for gaming.

There is one aspect of the controller that was very forward-looking, but also very overlooked by developers – the touchpad.  While it doesn’t have a dedicated ‘button’ and surface like the DualShock 4 on the PS4, nor does it support multitouch, it beat Sony to the punch by over a year.  Unfortunately, very few games use the mouse-replacement.

It’s here where the Ouya flexes it’s largest muscle – its open platform.  With just a few searches I found a tutorial that allowed me to, rather easily, pair a PlayStation 3 controller with the device.  Since the Ouya’s controller and the DualShock 3 are both Bluetooth, this makes for an easy pairing, but I wouldn’t expect to use an Xbox 360 controller.  That said, there are tons of Android-compatible or USB-powered controllers on the market that might work with the Ouya – your mileage may vary.

Using the Ouya as a media device means navigating via your controller.  I wanted to use my Harmony remote to control the device, but the device doesn’t feature an IR Blaster of any kind.  This means you’ll have to hunt down a compatible USB device to try to make that happen, but even then I’m not sure what it’d control without native software support.  If you have non-gaming family members that want to use the Ouya, it means handing them a controller.

As with any hardware, it eventually ages out.  PlayStation 1 becomes PlayStation 2, and so on.  The Ouya was released in June of 2013 and sported 8GB of memory supported by a Nvidia Tegra 3 graphics chip and a Quad-Core 1.7Ghz ARM processor.  Despite a fairly anemic hardware spec, it easily handles 1080p video over it’s HDMI 1.4 port.  This year they released an updated version of the system with a $30 price bump, but the only difference is that they pushed to 16 GB of eMMC flash memory.  Supposedly there are also updates to the wireless stack, and an update to the controller, but I don’t have the updated system to test those out – I imagine it just adds a better antenna.  With the Tegra 4 chipset moving into the tablet and phone market, it will limit the system on the long term.  It’ll be interesting to see if the Playcast service can make that a non-issue.

This 2.95”x2.95”x3.23” 11oz device is ambitious, but like the Raspberry Pi, it feels more like something you would dabble in rather than latch onto like you would with a new console at five times the price.  That said, Ouya’s new initiative announced this March looks to a future where the Ouya becomes the software package, embedded on several trusted platforms.  No word on when that’ll launch, but Mad Catz has signed on as the first partner with a $199 device they are calling the M.O.J.O, but it seems like a good step to offer consumers greater flexibility.

So here we are at the end of a review I’ve written and re-written several times. The Ouya is a strange little device that has found a niche within a niche. It gives indie developers a platform while taking up less room than a can of soda. It provides a decent controller and a very open platform for consumers and would-be hackers alike. As digital distribution grows, the Ouya’s future may be even brighter than its Kickstarter-roots might have suggested, but the future isn’t clear on this one. For just $99 it may just be your new home media slinger, just don’t expect it to replace your trusty next-gen console. It may just replace that noisy PlayStation 3 though...