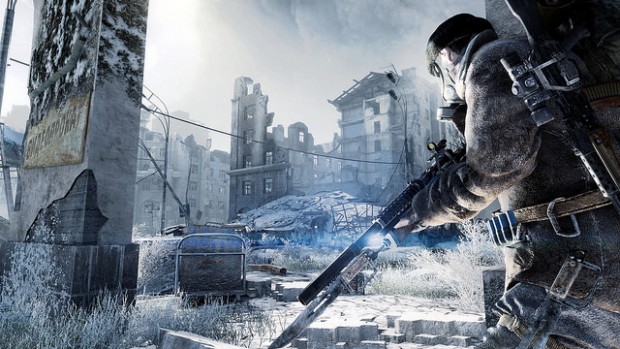 New consoles bring with them new experiences, but they also give us a chance to improve those games we really loved most. And as publishers tirelessly work ’round the clock to make those new experiences, they have to fill the gaps somehow—enter the HD “remaster.” Deep Silver and 4A Games have brought us Metro Redux, a reworking of two of last-generation’s most unique first-person shooters, and other than a few weird design decisions, are absolutely worth (re)exploring.

I use the word “unique” not as a pejorative, but as a selling point. Metro 2033 and its sequel Metro: Last Light are not your typical “run-and-gun” shooters. Taking place after a nuclear holocaust wipes out most of humanity, the Metro series is set in and above the titular Russian railway system. People are fighting for every last scrap of food or weaponry to eke out their miserable existence in the dim glow of the light of the subways—which sucks, but at least it’s better than living up on the irradiated surface, where massive mutants and a seemingly alien race dwell. The stories get a little campy whenever it deals with the the aliens (also known as Dark Ones), but the narrative thrives when you’re dealing with the Metro’s residents—especially when interacting with the communist Reds or the Nazis.

It’s appropriately bleak, and one thing the Metro series has done is take each survival scenario to its logical conclusion, and transfer it to the gameplay. Ammo is scarce, so you’ll need to explore every nook and cranny for precious bullets dropped by your fallen comrades. Pre-fallout ammo is even harder to come by, and can be used as currency—or an extra burst of firepower if you don’t mind literally shooting your money away. Your flashlight is hooked up to a hand-crank you’ll need to whip out to charge every now and then, and if you head out on the surface, you’ll need to make sure you pack enough air filters so you can breathe—and keep your gas mask fairly bullet-free, otherwise it’ll be rendered useless. All of these things add together to really put you in the dire situation of series hero Artyom, and the Metro series truly sells its world more than virtually any other game I’ve seen.

Originally, 2033’s unique world came at a cost—it was incredibly unforgiving at times, and decisions you’d made regarding weaponry or forgetting to buy enough air filters could spell disaster for you hours down the road. Its stealth sections were, to put it mildly, infuriating. As Atlas noted in his review of Metro: Last Light, if one soldier heard so much as a whisper, the entire room of guards would come down on you. With the Redux version, this is all but fixed, as the vastly improved stealth system from Last Light has taken care of all of those issues.

In fact, 2033 Redux gets the brunt of the improvements here, as its gameplay systems are brought up to par with Last Light. Weapons can be upgraded with attachments, the main character’s voice actor has been replaced to keep them the same across the board, and the overall graphical fidelity has been improved significantly, especially over the console versions. Improved lighting, textures, shadows, and a locked 60 frames-per-second enhance the entire experience, from the quality of the graphics to the fluidity of combat. The more forgiving difficulty of Last Light has also been brought to 2033 (including a Spartan mode that basically turns the survival series into a more typical run-and-gun shooter), but this can be offset by choosing Ranger mode, which removes the heads-up display, the crosshairs, and makes everyone’s gunfire (including yours) much more deadly. All of these improvements essentially make Metro 2033 a completely new game.

This works almost entirely in 2033’s favor, except that a few of the additions made to 2033 aren’t really explained all that well. Wiping off your visor or using your lighter to burn spider webs—things which are explicitly explained to you in Last Light—are barely (if at all) mentioned in 2033. I ended up stuck at a part of the game for nearly 15 minutes, and I thought I’d hit some kind of invisible wall glitch, until a kind Internet citizen informed me that I could, in fact, use my lighter to take care of a massive wall of spider webs. It’s a bit infuriating, but for the most part 2033 is vastly improved over the original version.

Last Light doesn’t see nearly as many improvements (as its gameplay was used as a baseline for the improvements on 2033), but it still benefits greatly from the improved lighting and texture work. Don’t get me wrong—4A Games did a great job bringing 2033 forward to the PlayStation 4, but hopping right into Last Light after beating 2033 only highlights how much more detailed Last Light is in comparison. You also get all of the DLC released for Last Light, including new story missions and challenges. Not a bad deal at all.

The Metro series wasn’t for everyone when it first came out, and the Redux version, while improving the games in many substantial ways, still doesn’t change many of the series’ unique aspects. It’s still a dark, foreboding game set in dank, claustrophobic tunnels, and those brief moments of sunlight you do get are limited by a timer tied to your air filter. But as an experience, Metro Redux is mostly successful at everything it sets out to do—and with two games in one beautifully remastered package, it’s a hard deal to pass up.

Metro Redux combines two of the most uniquely harrowing first-person shooters onto one disc, and applies a whole mess of graphical and gameplay improvements that hit far more than they miss.