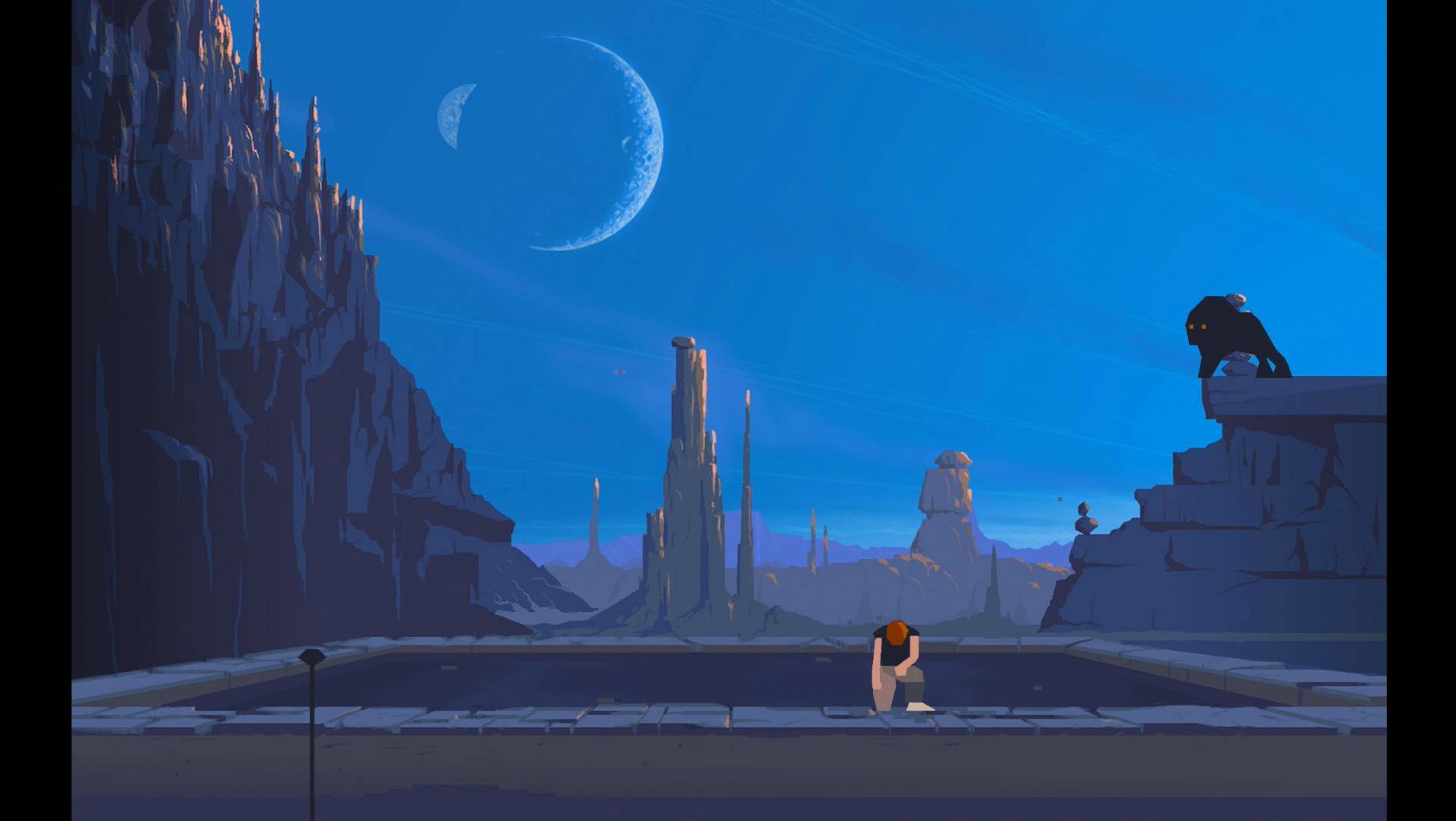 Pull up in a Ferrari, in the dead of night. Most of the world is asleep, dreaming of adventure. You, a scientist who drives a Ferrari, are either far too cool or far too insecure to do the normal thing. So you pop out of your fine ride, crack open a cold one, and begin to run tests on a particle accelerator, an accelerator of which you’ve inexplicably placed your desk at the nexus of the machine.

This oversight proves to be a costly one, as a lightning storm causes the particle accelerator to transport you and your ill-placed desk to Another World. This new and strange place is deadly for you in almost every sense, but keen observation and otherworldly ability will allow you to escape your fate in the end. Another World is a gaming masterpiece, and even after all of these years since its original release, it holds up against even the most modern and advanced cinematic gaming experiences.

Another World captures the essence of being in the moment; The story begins with no explanations. You are simply a scientist and who you are, what you are doing, and why are never answered nor questioned in the game itself. You are pushed immediately into action, and play through an entire game with no words spoken, no clues given, and no expository cutscenes involving flashbacks or dream sequences or any of that nonsense. It creates in your experience a sense of immediacy and importance; you feel as if every single success is a creation of your own mind as opposed to a laid out step to follow.

The lack of dialogue was definitely a function of the technology in that era, but it works beautifully. The noise of the world around you, the music, and your actions paint a sound collage along with the visual storytelling that brings you even further into the experience. This, combined with creative use of the game camera, such as zooming in to show small detail or zooming out to show scope, as well as the hand-drawn aesthetic in the remastered graphics, combines a world class story with a well made setting and well set tone.

Gameplay is a simple mix of jumping, attacking, and the use of a generic action button that allows the player to perform different tasks when appropriate. The game starts you with no weapon, but you soon receive a laser gun that allows you to shoot, create shields, and create a megablast that can destroy enemy shields and blast holes in walls and doors. You’ll have to get comfortable with this gun as early as possible because the enemies you face wield the same weapon with the same functionality.

The gameplay is a bit clunky at times, and with so many pitfalls and dangers it can be easy to get frustrated and give up. From the very start you encounter slugs that kill with one hit, setting the tone of constant death early. As you progress, more and more dangers present themselves, requiring deft use of the provided laser gun, your jumping ability, and a little forethought. The trial and error of Another World is constant and turns what is roughly a 30 minute story into days upon days of gameplay.

Clearly this game wouldn’t be worth playing if it were extra simple and as short as it is. You’d get through it in one sitting and would never think twice of it. However, it is hard to convince oneself of that fact when you’re staring down a corridor of death pits that you’ve tried to traverse 65 times before while still not even knowing if that is the correct path to take. The game has a few brutal fail points that don’t even show themselves until much later in the story, meaning you’ll have to go way back or start anew if you fail to do these tasks in correct order.

The length of the game is also a slight problem and more so for talented gamers unlike myself. If you are capable you could get through the game in one sitting. After you’ve defeated the game, the only reason you’d want to come back is to do a speed run or no death run and most people wouldn’t want to do something like that with a game as difficult as this. So, if you do manage to beat the game in a day or two, that’s it. Not much replay value lies here and that is exacerbated by the game’s great use of the vague ending which leaves the player to wonder just what occurs after the end sequence.

The remastered sound and graphics do a lot to change the experience without actually making a gameplay difference. The old graphics look fine for the time they were made, but they are hideously ugly for today. The update holds the aesthetic and design elements in place, but cleans the rough edges and adds a hand drawn, almost wispy look and feel to the backgrounds. The sound difference is less drastic, so I found using either version of the soundtrack was acceptable.

Another World is a game that has critical acclaim, cult appeal, and this remastered version of the game makes the experience smoother and better looking while not sacrificing any of the original game’s charm. There are some frustrating moments in the controls and the game is very short, but both of these are less drawbacks than they are just leftover remnants from gaming’s bygone age. Another World has one of the best stories ever told through a game and remains a true shining gem in both the past and present of gaming.

Patrick Rost has been with Gaming Trend since 2013. At first focused on sports coverage, Patrick has gone on to cover a wide range of games and other products for the website. Outside of Gaming Trend, Patrick writes and records music, grinds perpetually in Elder Scrolls Online (PS4), and lives day to day with his two dogs, Bob and Stella.
Related Articles: Another World
Share
Tweet
Share
Submit