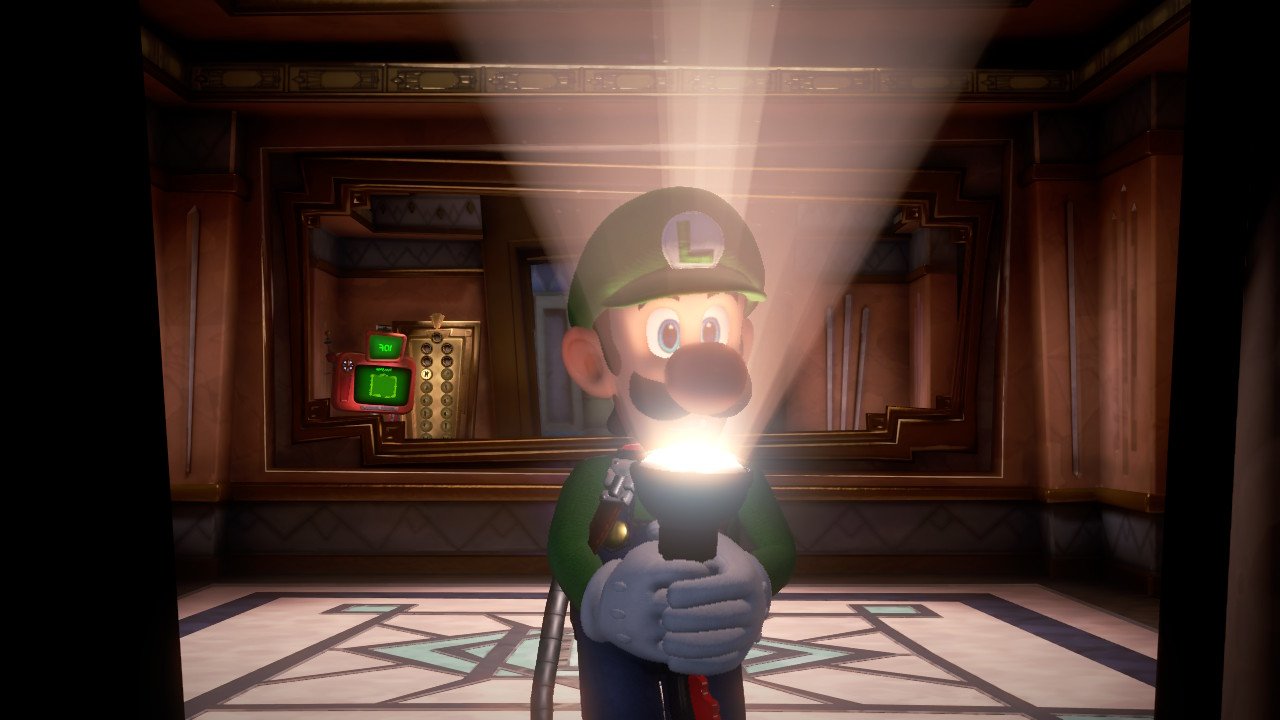 When it came out, the first Luigi’s Mansion was one of the most unique games I had ever played. Even now, it’s hard to replicate its style without completely ripping it off, and that’s why no one has tried yet. While they eventually followed up the 2001 classic with 2013’s Luigi’s Mansion: Dark Moon, the series has been in stasis since, save for a lightgun-esque arcade game. Finally, our main bro in green has returned with arguably the best entry yet, Luigi’s Mansion 3. 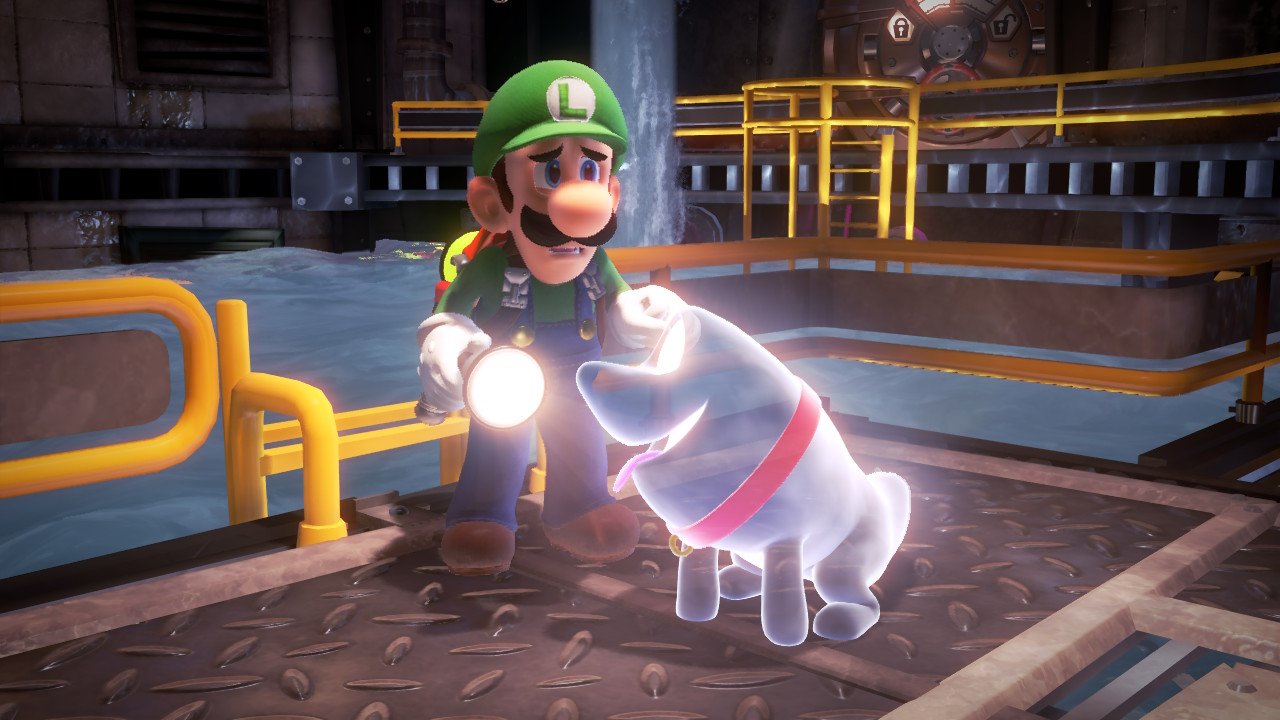 While Luigi’s Mansion: Dark Moon took a more level-based approach, it arguably lacked some of the spirit the first game had by not allowing you to explore a large mansion however you wanted. Luigi’s Mansion 3 has a smarter approach to this while making it feel like you’re exploring one giant area, though this time the mansion is actually a large hotel. 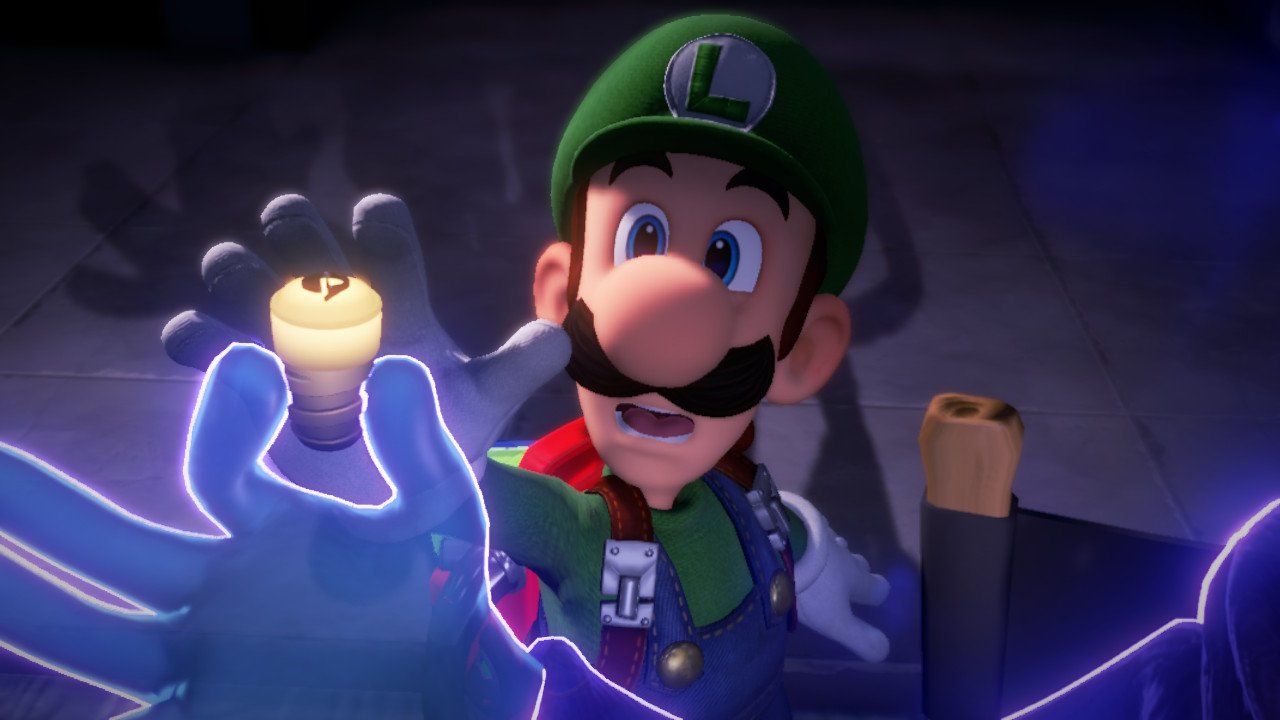 As you progress through the game, you’ll obtain elevator buttons that allow you to go to different floors. These floors are actually thinly disguised levels, as there isn’t a way to travel between them besides the elevator. However, it’s worth coming back to these floors later, as you’re sure to uncover Boos or gems. Each floor has its own set of gems, and uncovering all of them on a floor unlocks an achievement, but it doesn’t feel like going after all of the gems leads to a fantastic reward, so at times I felt like I was wasting my time looking for them. 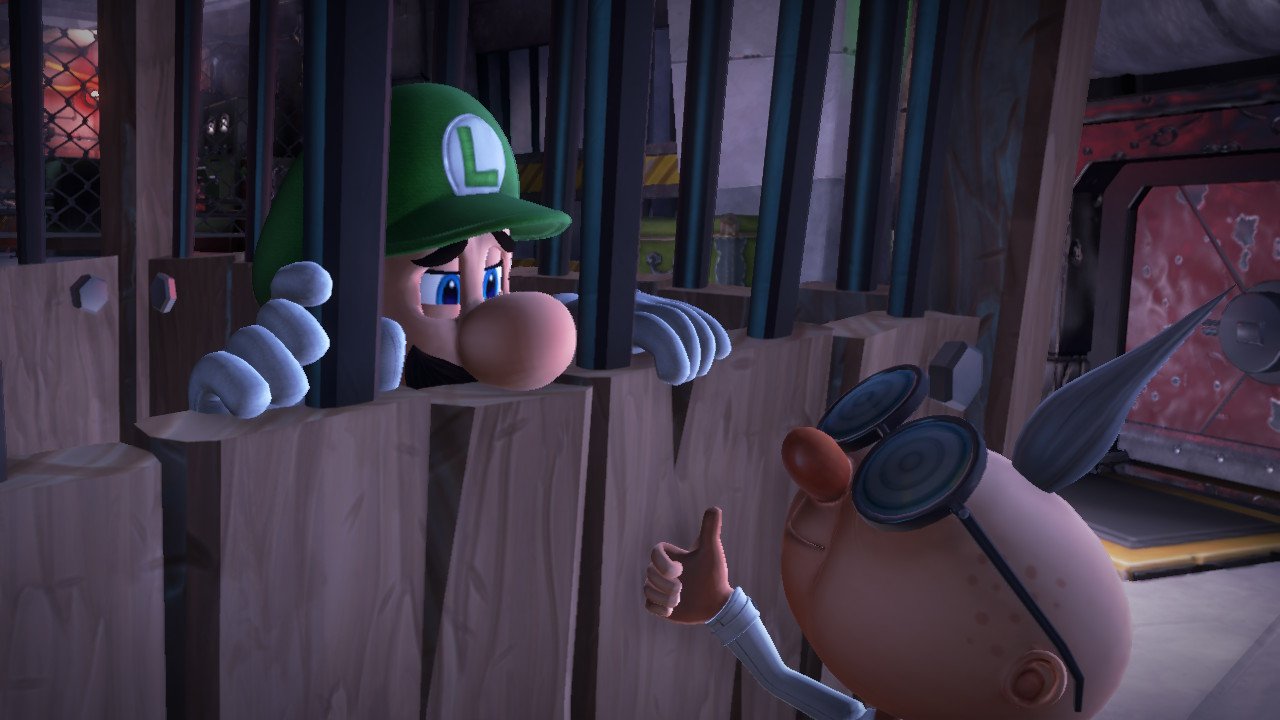 Like other Luigi’s Mansions, you collect money as you play. While you can spend the money in a small E. Gadd shop early on, there isn’t much use for it during gameplay. That didn’t stop it from being satisfying when you uncovered a secret wad of cash. Even if I didn’t feel like there was a benefit, I still went out of my way to suck up every item and squeeze through every pipe. 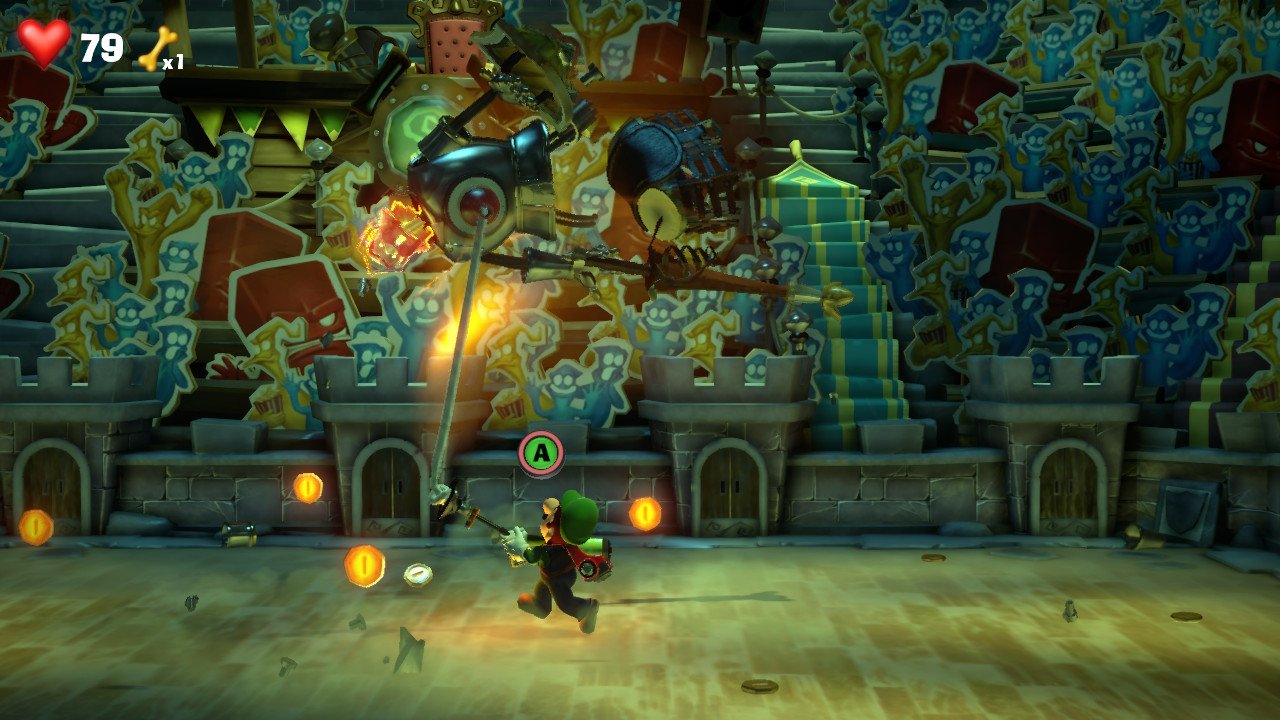 Of course, I haven’t even talked about how much more decked out Luigi’s arsenal is. In Luigi’s Mansion, he only had the ability to suck up ghosts, flash his light, and blow air. In Dark Moon, he gained the ability to use a dark light to uncover hidden objects. That dark light returns, but he now has the ability to jump into the air and knock out everything around him, shoot a plunger and then suck it up to pull something, or create a Gooigi clone that can be controlled by another player or switched to in order to enter drains or slip through gates. There’s so much that can be done now that it’s almost overwhelming, but the game slowly eases the mechanics in without any tutorials that overstay their welcome.

Even sucking up ghosts has a new mechanic. When the meter is full, you can smash “A” to slam the ghosts onto the ground. This does 20 damage normally and can be used to attack other ghosts. This could be used as a form of crowd control, but it really helps create a more action-packed encounter with spirits. 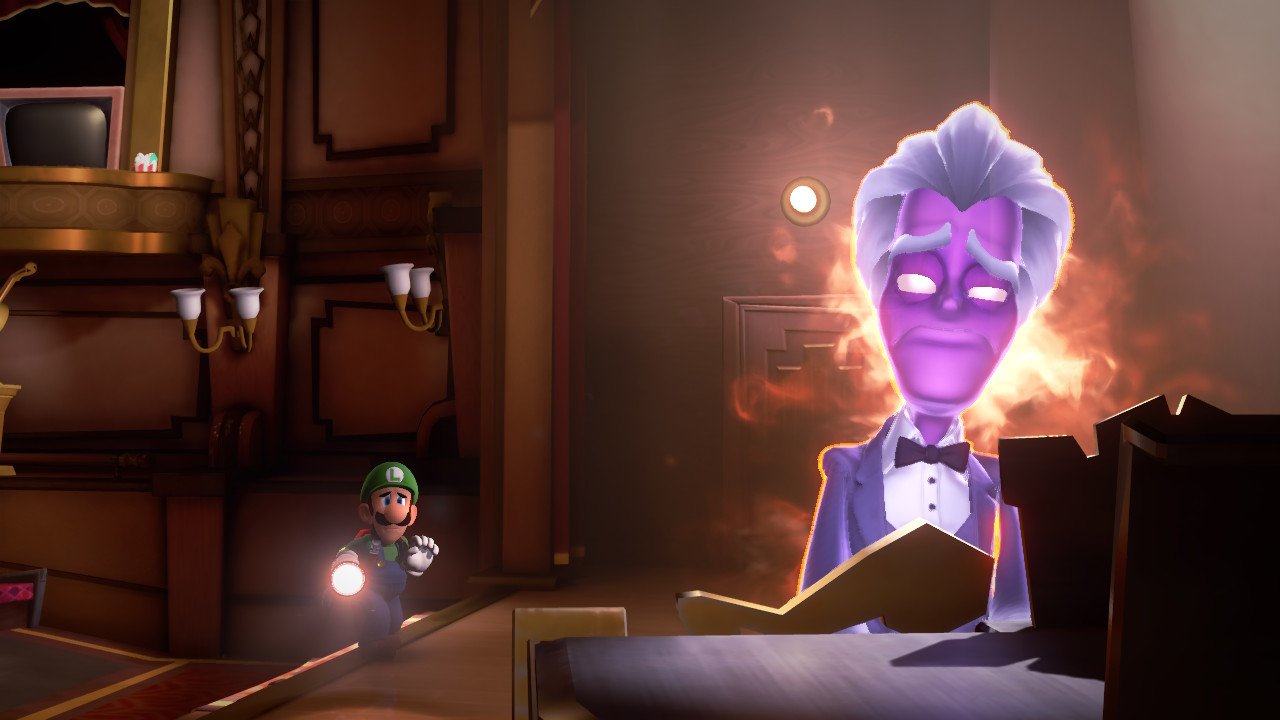 Luigi’s Mansion 3 just oozes with personality. Several times throughout the game, you’ll be given a cutscene that usually involves a ghost terrorizing poor Luigi. These cutscenes look beautiful and the charm through small comedic moments makes them worth watching. You almost feel bad for Luigi the way some of the ghosts treat him. I’ve seen enough people talk about the beginning of the game as an example; showing a toad trying to drive a large bus and that’s about the height of the humor the game gives. 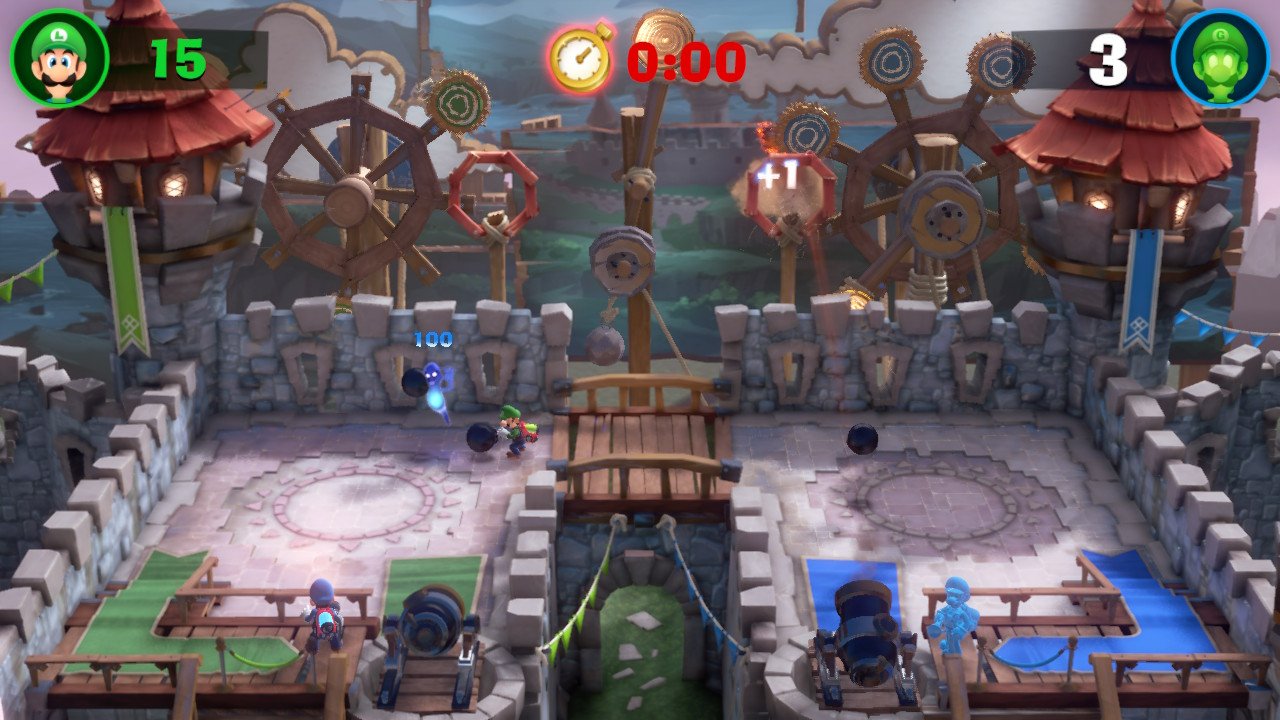 Luigi’s Mansion takes another stab at multiplayer with the ScreamPark. This is a batch of minigames that can be played with up to eight people. There is one for collecting coins, one for catching ghosts, and one for firing a cannon to hit targets. These games are a fun distraction, but they aren’t something I’d call game nights for. Especially since you can’t have an AI controlled player help balance out uneven teams. The other multiplayer mode has much more replay value. 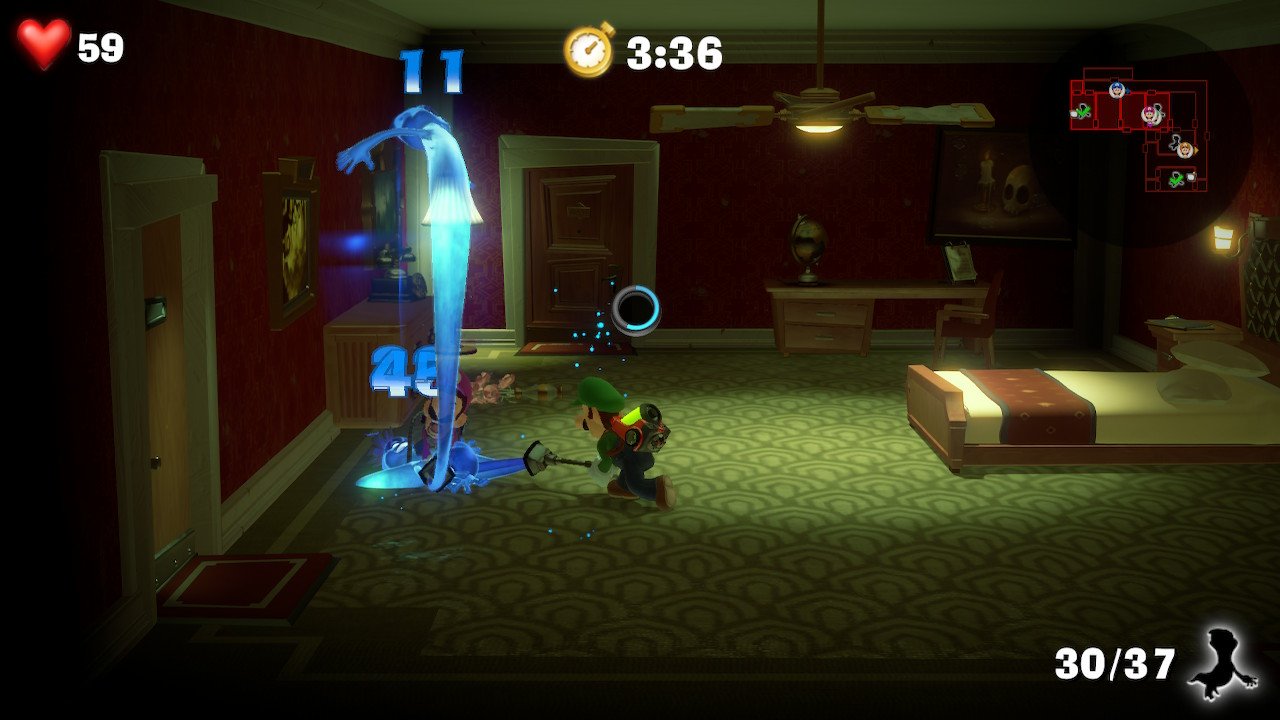 ScareScraper returns, and this time it’s more complicated. In ScreamScraper, you and several other players work together to clear the goal of a floor in 5, 10, or a random set of floors. However, this mode is nearly impossible solo. The goal you have to complete is usually out of the realm of possibility, but sometimes playing with strangers is just as bad if not worse. Like Dark Moon, you can play ScareScraper online, and that returns in Luigi’s Mansion 3. There are some rooms that require eight players to push a button. That is the four players playing online and their four Gooigis. This requires everyone to not only meet in the same room with limited communication, but send out their Gooigis as well. If you’re playing with your friends, however, ScareScraper is a blast. 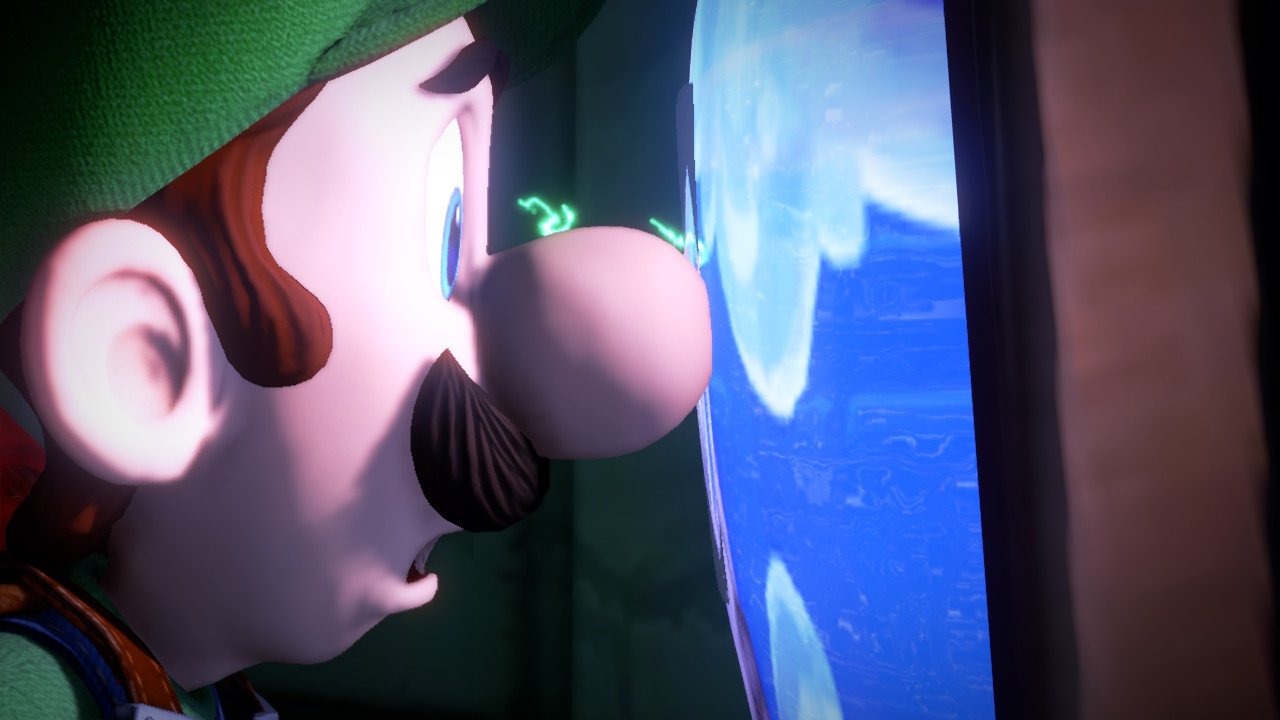 I can confidently say that Luigi’s Mansion 3 is the best entry in the series. While there are moments in collecting where it feels like it’s not worth it, sucking up everything in the environment and fighting all of the bosses is a blast and I see myself coming back for more. It’s not as dark and atmospheric as the first game, but dang does it look pretty.

Luigi's Mansion 3 is incredibly charming and the best evolution of the series to date. Every corner of the Last Resort Hotel has secrets and the gems can be incredibly difficult to find. If you're coming for the hilarious cutscenes, you'll stay to explore every floor of what this game has to offer.

Sean Anthony likes to combine two of his passions: gaming and writing. Gaming has been a huge part of his life ever since he played his first game as a child, Kirby's Adventure. He aspires to have his name attached to an article that makes the whole world go, "Huh, that's neat, I guess."
Related Articles: Luigi's Mansion 3
Share
Tweet
Share
Submit