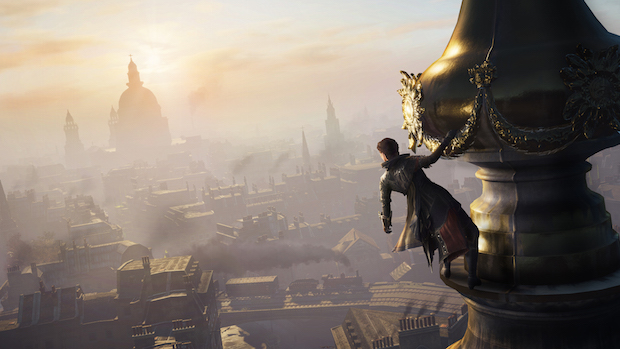 On the heels of its quiet release, Syndicate brings us a dual protagonist cast as we quickly meet Jacob and Evie Frye. The siblings are very close, and have recently suffered the passing of their father. The two’s objectives vary slightly; as Jacob is focused more on taking out the Templars, while Evie wants to pursue a piece of Eden that she knows can help mankind. As you can guess, these two objectives begin to bleed into one another. The two feature good chemistry, and throw retorts back and forth just like you expect from a sister and brother. The biggest issue comes when the game focuses solely on Jacob Frye.

Jacob is exactly what you expect out of a male Assassin’s Creed protagonist. He is the same thing we experienced in Edward Kenway and Ezio. A slick talking, sly, cocky guy that thinks he knows everything about the world. While Auditore and Kenway were great characters, they were great because they felt different. Ezio was the first of his kind, while Kenway was all of the above, plus a pirate. Jacob is just another guy that really wants to be much cooler than he really is. Evie, on the other hand, is a very solid protagonist that goes through her ups and downs. She doesn’t assert as much personality, but that just seems like who she is. On top of that, she kicks ass better than anyone in the game, despite her brother being the more “combat savvy” of the two.

As for using the two in missions, the game typically decides which character to control. When you are roaming about London, you can feel free to switch between Evie or Jacob, but in mission is a different story. This ends up being rather frustrating as a majority of the missions require you to play as Jacob, with Evie only getting one or two adventures in each chapter (or sequence, in Assassin’s Creed terms). For the most part, this doesn’t hurt the experience too much, but Ubisoft missed an opportunity not putting focus on their strong female lead.

Your ultimate counterpart goes by the name of Crawford Starrick, a mid-40’s all-around terrible guy. He murders innocents while playing piano, launders money, and has a curly moustache. Starrick ends up being one of the stronger antagonists the series has seen. Crawford continuously does something despicable that incites desire to hunt him down. Unlike many bad guys in past Assassin’s Creed games, Starrick is a lasting presence that is more well-rounded than either main protagonist. Thankfully, we get to see quite a bit of him and his frustratingly perfect moustache.

The strong models extend past well-crafted facial hair, as every story-focused character looks fantastic. Evie and Jacob both draw similarities to one another. And their model’s faces are expertly designed and never creep into uncanny valley territory. Even beyond the main duo, side characters also feature strong detail. Folks like Alexander Graham Bell and Karl Marx look great from head to toe.

For years, the strongest thing about the Assassin’s Creed franchise was its traversal. Your ability to climb across buildings and leap from window sill to window sill was unlike anything else in video games. This year, the traversal seems much worse than it has in the past. Your character will constantly stick on different parts of the world, and refuse to make even the smallest of jumps, even if you change to the free run down option. Navigating the roofs of London feels like an annoying chore as you have to hold the hands of your character every step of the way. The new feeling (or aged nature) of climbing in Assassin’s Creed Syndicate has dampened what used to be one of the most untouchable features of the series. It ruins multiple missions, and make one of the most enjoyable aspects of the franchise a mere footnote that is best ignored.

Not all traversal is bad in Assassin’s Creed Syndicate, as Alexander Graham Bell helps develop you a grappling hook. This makes climbing up larger obstacles, and escaping in tight situations much easier to accomplish. The most help it provides comes when climbing synchronization points. In the past, you would have to slowly navigate your way up a building, eyeing any handhold in your grasp. Now, you just look up and shoot your grappling hook as high as possible. From there, you do a small amount of climbing and begin your synchronization. While the process of moving from building to building is now one of the worst parts of Assassin’s Creed, the inclusion of a grappling hook can really help out in certain spots.

Combat is another thing that has featured some changes. No longer can you walk into a group of twenty enemies and eliminate them one-by-one. Instead, there is a leveling system that will make enemies two or more levels above you near impossible to kill. This can be disappointing at times, as eliminating a row of Templars was quite enjoyable, but it is a change that makes the combat feel more balanced. This leveling system is determined by how much EXP you earn in missions. This gives you real incentive to go out and actually take part in the host of side content at your disposal.

These side missions have been reduced from Unity, which featured a world map littered in objectives. However, there are still some miscellaneous adventures at your disposal. Many of these side missions will have you teaming up with the aforementioned historical figures such as Karl Marx, Charles Darwin, and Alexander Graham Bell. While the mission design in the side objectives is far from fantastic, the experience of hanging out with such revolutionary figures, and actually seeing them assert their own personality is always enjoyable.

Tailing missions are few and far between in Assassin’s Creed Syndicate. That sentence alone will excite a majority of the franchise’s fans. The monotonous structure of the side missions does not bleed into the main story, as many of Jacob and Evie’s adventures are varied and exciting. There seems to be much more action in Assassin’s Creed Syndicate, as you can find yourself jumping between moving trains, infiltrating heavily covered building, and hilariously ramming into opposing horse carriages. For the first time since Assassin’s Creed II, you can safely say the mission structure is fundamentally solid in the newest installment. The stout framework takes a major hit at times, however, as the aforementioned movement between buildings can quickly damper any kind of thrill. You will be hopping from train to train, executing combos or silently eliminating every enemy, only to find yourself struggling with the controls.

Easily the oddest thing about Assassin’s Creed Syndicate is how much driving takes place. Of course, your only options are horse-drawn carriages, but they nonetheless get you from place to place. Many missions will require you board these carriages, either to chase someone or defend an ally. Surprisingly, the act of driving a horse is rather inoffensive. The controls are pretty tight, they move quickly, and the roads are generally large enough to not cause any horse congestion issues. Of course, making precise movements like a three-point turn with a horse is fun for no one, but their inclusion is nonetheless smart and well incorporated.

When it comes to bugs, my playthrough of Assassin’s Creed Syndicate featured a few. There was a man driving a cart, and then the cart just disappeared and he sat there motionless for a good ten minutes before disappearing. Perhaps the most comical instance came in a cutscene, where multiple characters just decided to disappear. This resulted in a lady talking to a floating knife for five straight minutes. At the end, a floating stack of envelopes came in and Jacob uttered the words “We have to fix this.” While he was talking about the broken grapple gun in his invisible hand, we all know what they really should have fixed.

The settings have always played a large part in the Assassin’s Creed world and that stays the same in Syndicate. You roam about 1860’s London, which is represented beautifully. You get to climb Big Ben, the Bank of England, the Tower of London, and other historical locations. The visual design remains strong, until things actually start happening on screen. Basically any sudden movement can cause for a dip in the frame rate, which only gets worse as more things appear. Syndicate can quickly go from being a solid looking game to an absolute visual disaster all in the span of about ten minutes. Poor performance like this should not be an issue in this era of video games.

To this day, I call Assassin's Creed II my favorite video game of the past generation. It was truly a masterpiece. Unfortunately, the Assassin's Creed series has become a shell of its former self. Syndicate tries hard to recreate some of the magic, and even creates some smart new features, but it ultimately falls short. If Assassin's Creed Syndicate had been in development for another year, it could have been a thrilling mid-1800's adventure. Instead, it sinks into comfortable mediocrity.