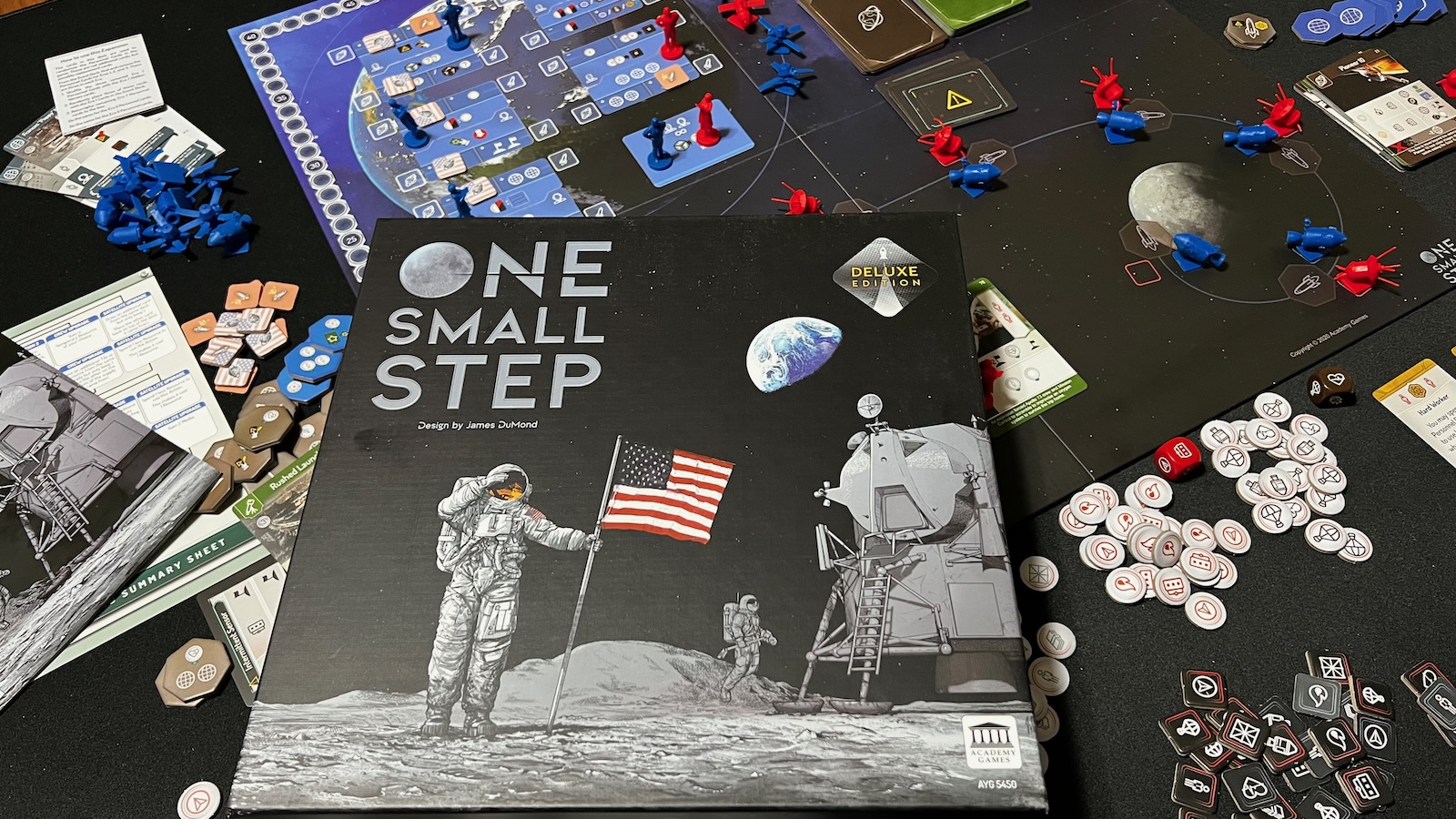 One Small Step for man, one giant leap for mankind. In the 1950’s and 60’s, the two great superpowers of the United States of America (USA) and the United Soviet Socialist Republic (USSR) were embattled in a Cold War that affected the whole world and beyond. One Small Step from Academy Games allows you to choose a side in one of the grandest theaters of this Cold War: the Space Race. 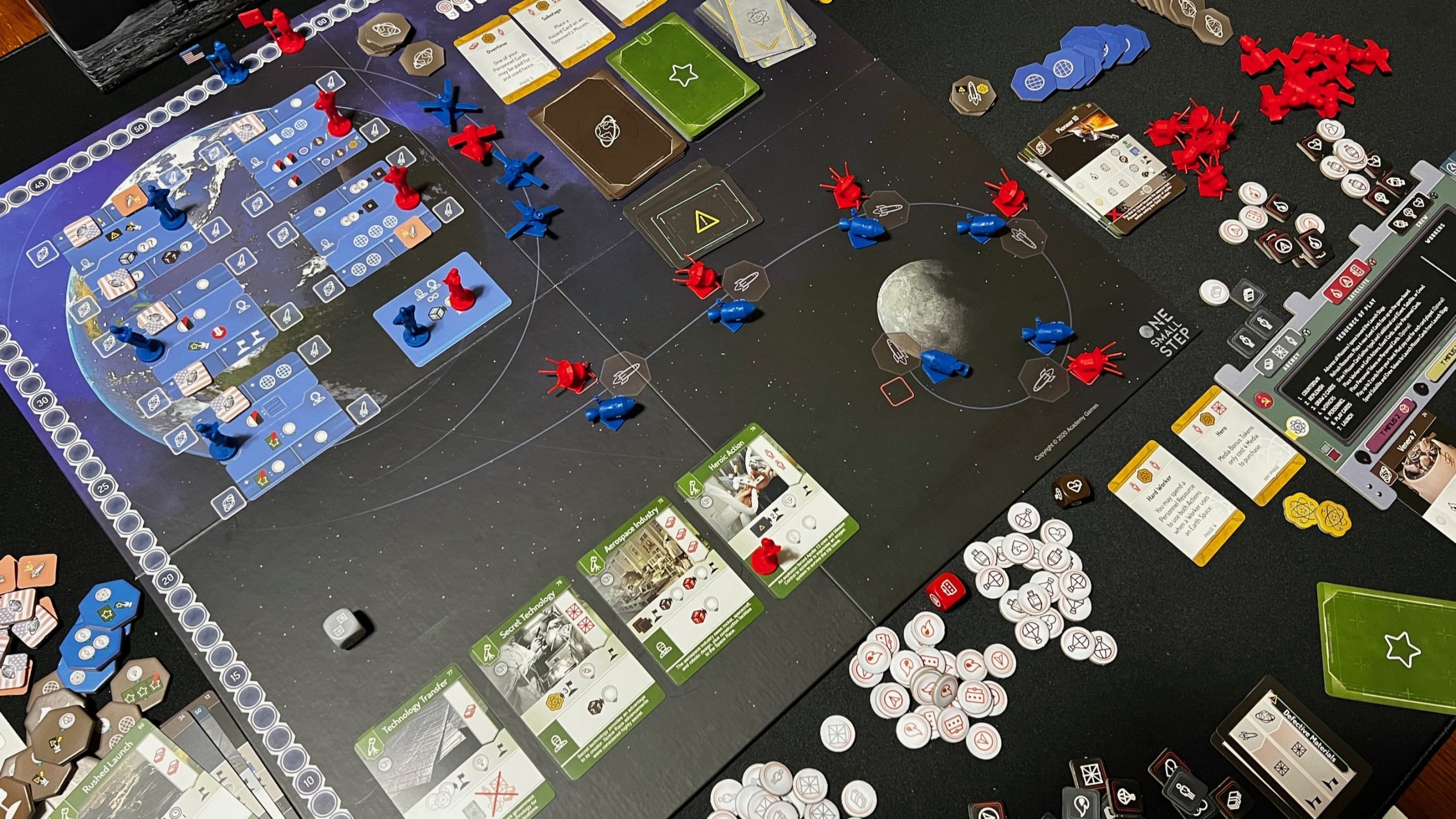 End of game board state

One Small Step is a 2-4 player worker placement/light engine builder that incorporates the setting and theme of the race to the moon in one of the best ways I’ve seen in a board game. Each player or team takes control of the engineers and administrators representing the space agencies of the USA and USSR. When playing as a team, each team member controls one of the two factions, whereas in a two player game each player controls both factions. Through a series of rounds, each player places their workers on the board to carry out actions, tries to gain resources to complete events and missions, and tries to influence their country’s support through the media track. The player with the most points after the first moon landing wins! 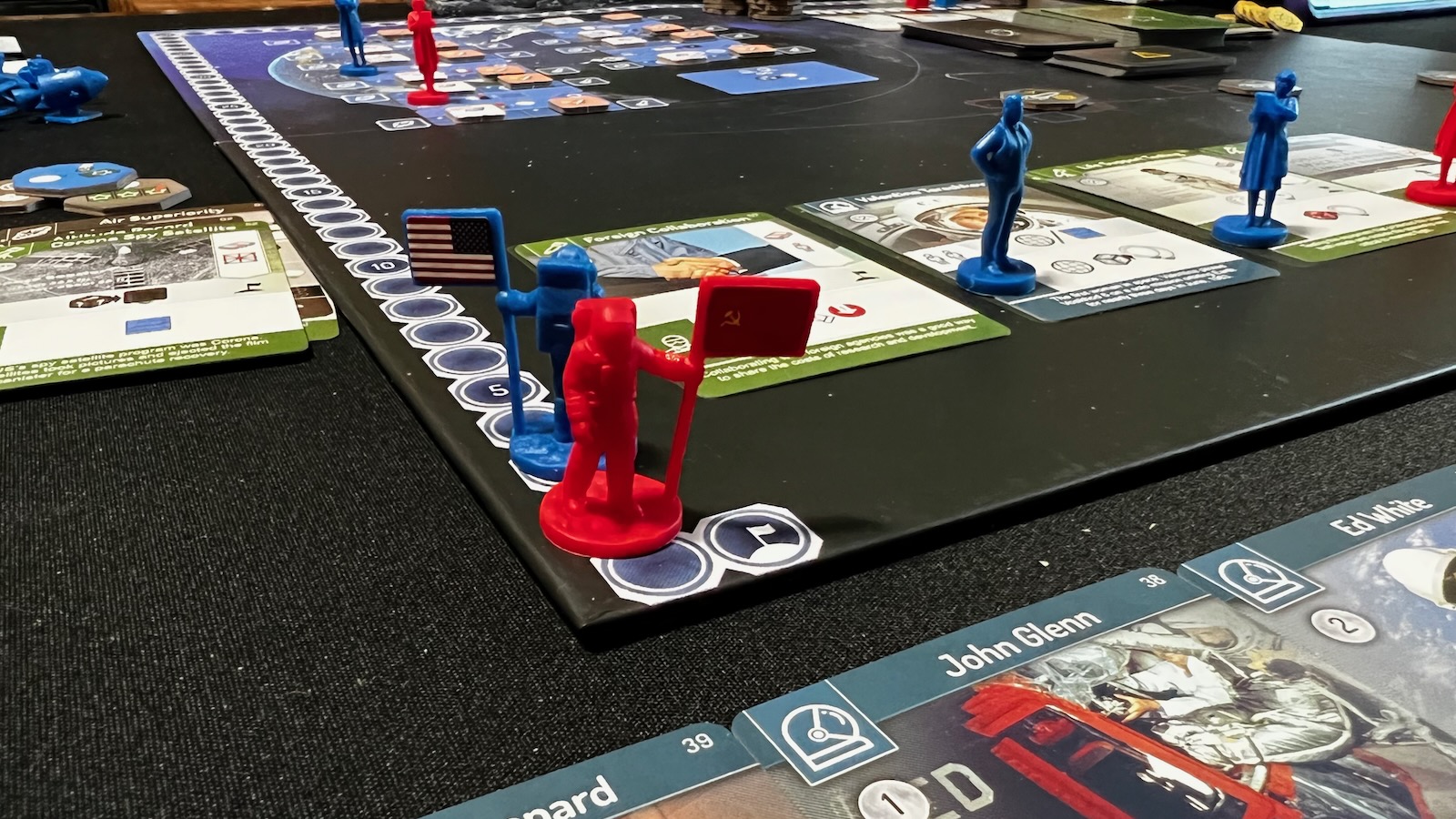 Each round takes place over seven phases. Throughout the game, players try to accomplish satellite or crewed missions to help upgrade the board and advance on the points track. Missions are placed on a countdown track and the starting phase of each round moves these missions closer to launch. The second phase refreshes action spaces and any permanent resources players used in the previous round. The third phase allows players to draw new event and mission cards. Event cards depict different events from the historical conflict and give players advantages if able to pay for them later in the game. They also include famous figures such as Neil Armstrong or Yuri Gagarin that can be hired and used as personnel for each space agency. During phase four, the players alternate placing workers in different spaces on the board. In beginner mode, a special overlay is placed on the board offering a wide variety of actions to choose from. In veteran mode, the actions are simpler at the start of the game with opportunities for players to upgrade the spaces as the game goes on. Spaces are also divided into engineer and administration spaces, so players have to strategize when and where to use them. Special event spaces are also available on cards that are refreshed each round. After placing workers, players are able to activate any personnel they’ve hired by paying a cost, then they can play up to two event cards by paying the cost of the card. 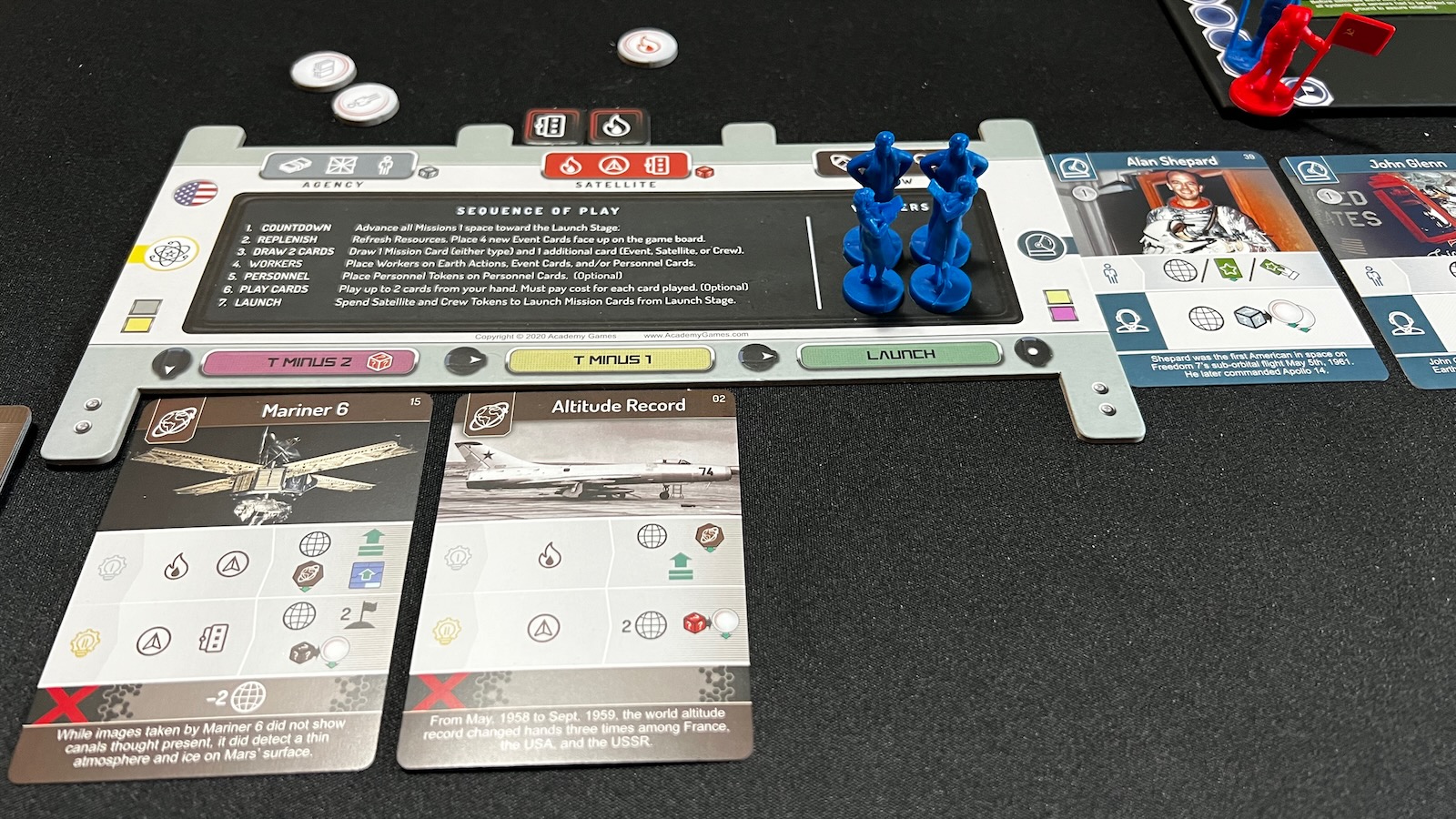 The last phase of the round consists of launching missions. The missions have a minor and major success criteria that the players can pay for. If players are not able to complete a minor success, penalties can be assessed. Hazards can also be added to missions that add a secret cost to mission successes. There are 9 different resources, separated into three categories: Agency, Satellite, and Crew. Each resource is one time use unless upgraded during the game. The upgraded resources are exhausted after use, but then replenished at the start of each round. Players are allowed to complete as many missions in their launch area as they can pay for. Completing missions gives players opportunities to launch satellites and gain bonus tokens and send crewed pods towards the moon, inching the game closer to its end. 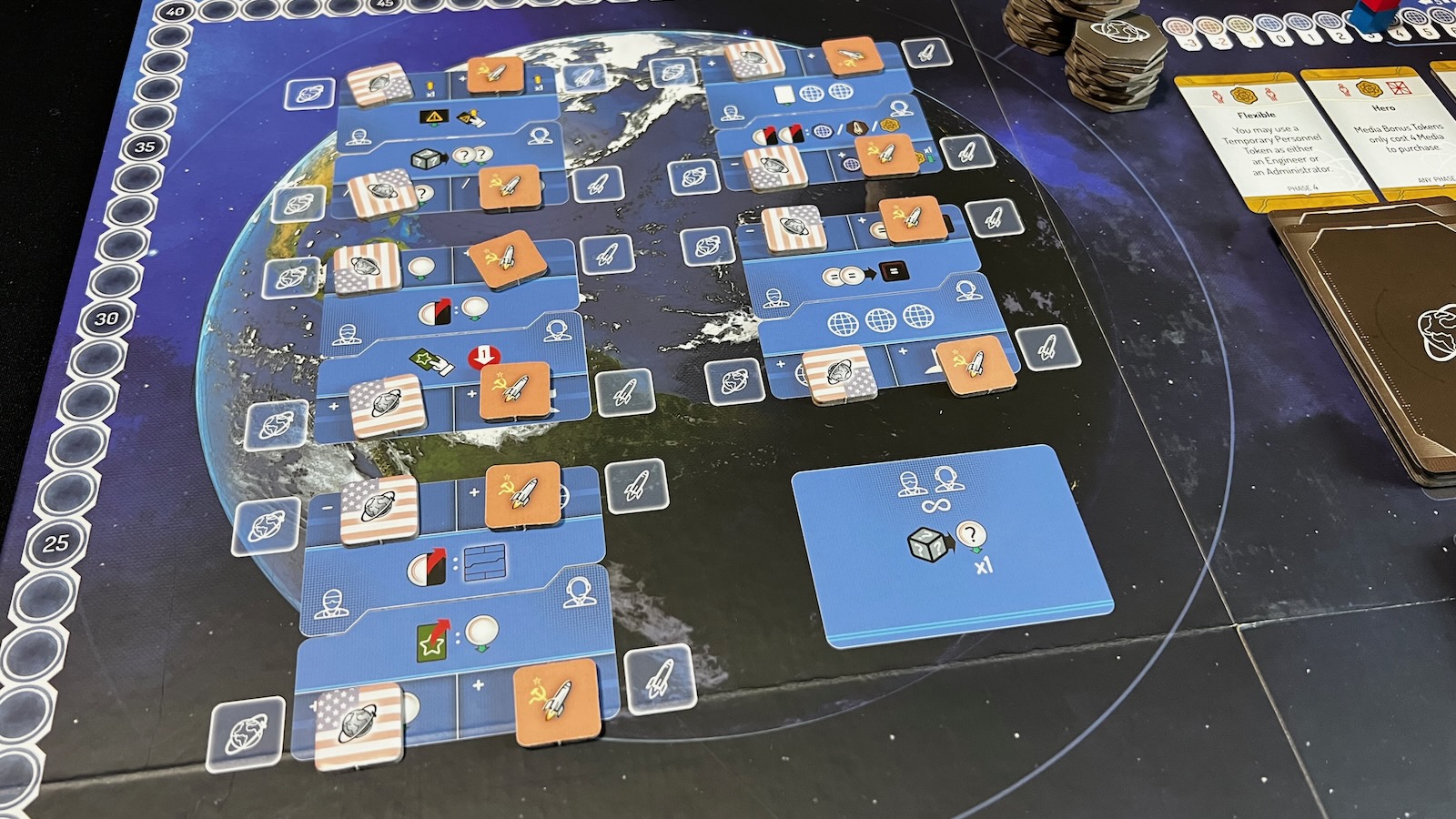 One of the most interesting elements of the game was the media track. Different actions throughout the game allowed you to move up and down the media track which delineated initiative and turn order for each phase of the game. Players had a choice to lose media influence to gain media bonus tiles. Sometimes media initiative didn’t matter in one phase, but could be important for another phase. Manipulating the media track became just as important as gaining resources to complete missions. 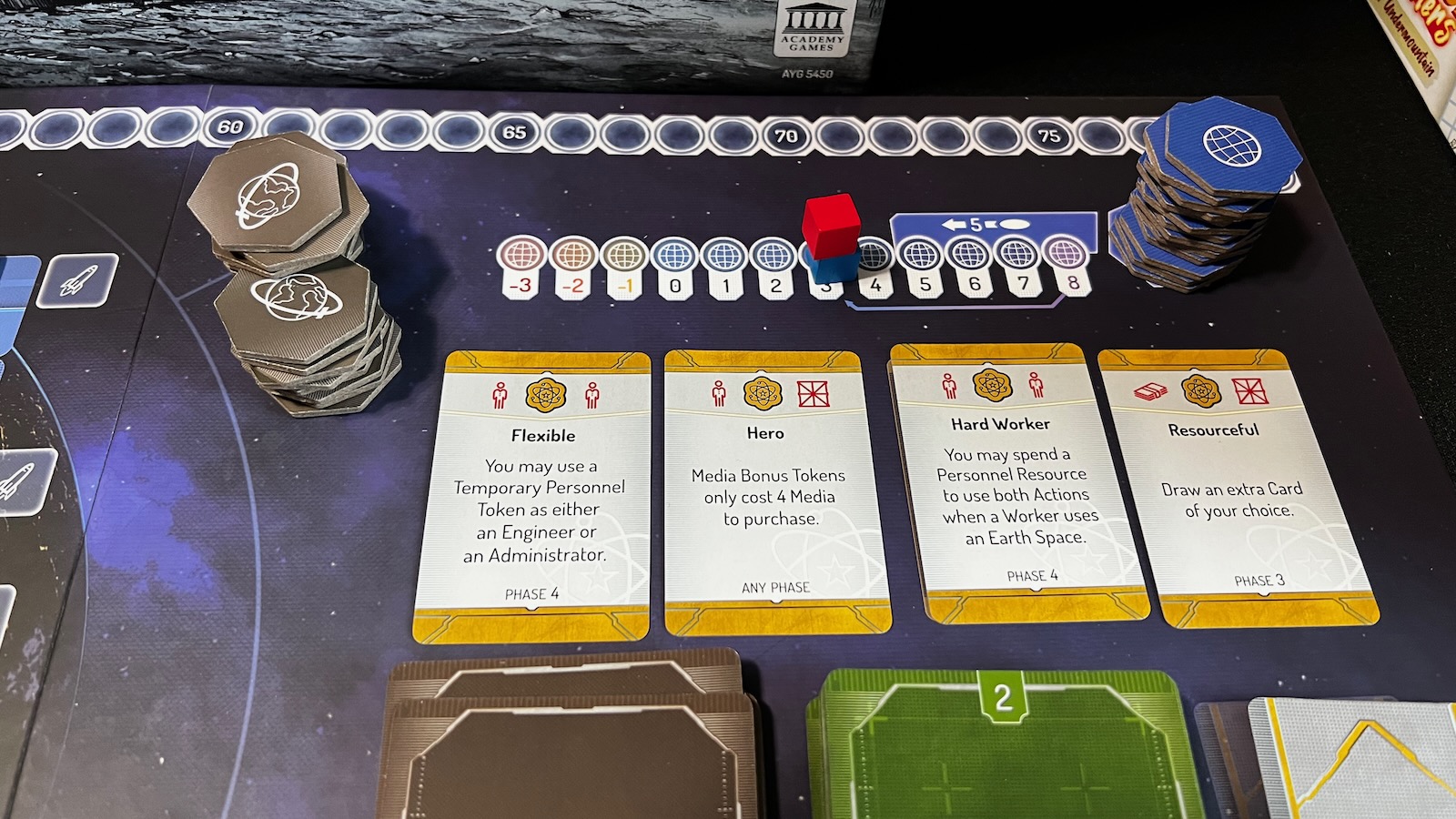 Media track and advancement cards to help players get bonuses throughout the game.

Before I go too much further, let me pause to talk about how the designers implemented the theme. The integration of the theme here is one of the best I’ve ever seen. Throughout the rulebook, the designers inserted notes about why they added a specific element to the game. Each event and mission card contains pictures from the space programs and captions describing how the actions or people impacted the era. The use of the media track represents how each country tried to gain public support for their efforts and the USSR started higher on the media track than the USA because of the launch of Sputnik giving them a leg up. Even the Hidden Heroes expansion pays homage to the lesser known heroes of the space race on each side. I found myself immersed in the theme throughout and enjoyed learning and playing at the same time. 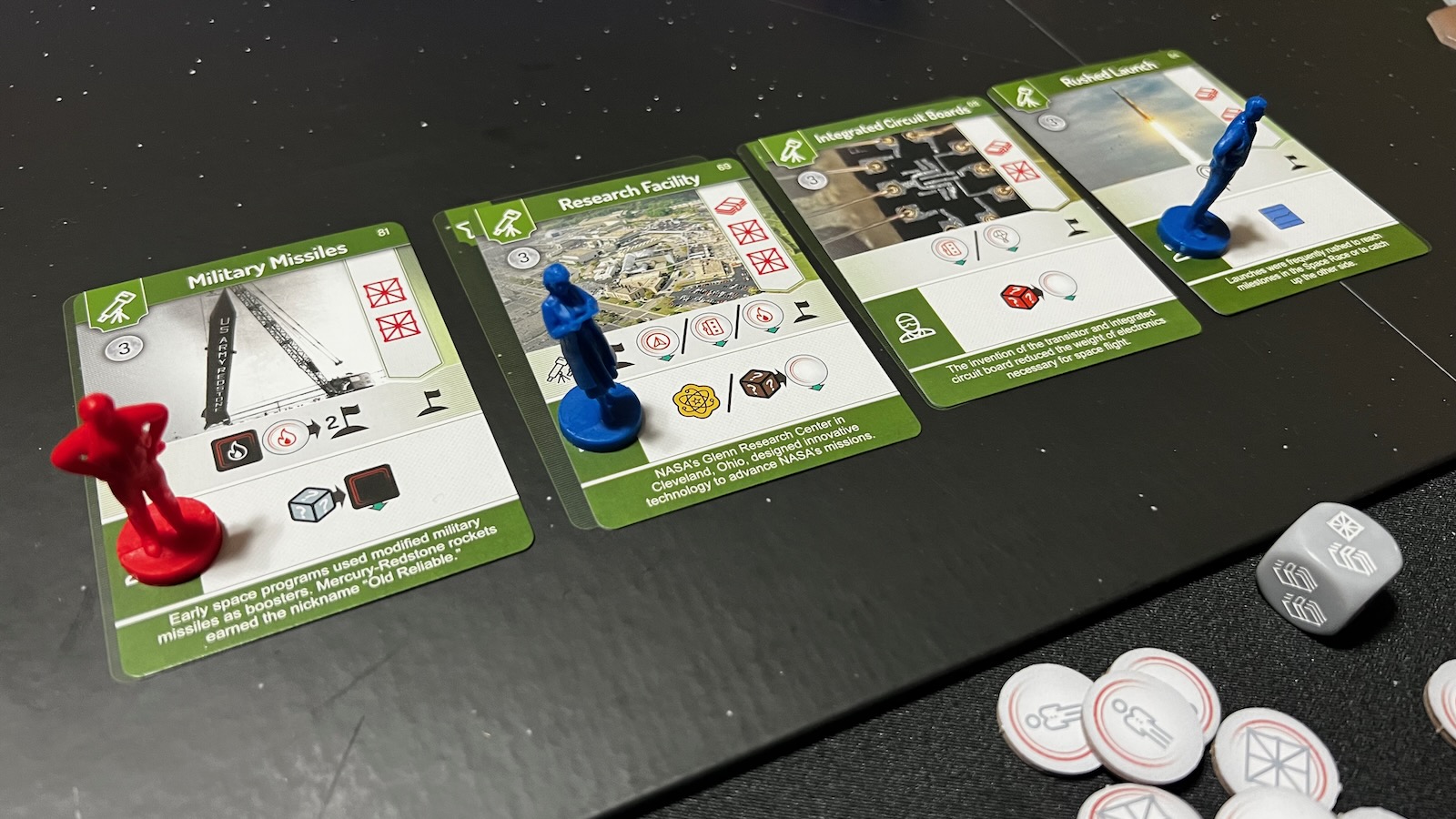 Event cards serving as action spaces for the round. Cards feature historical flavor text to explain its role in the space race.

The base game of One Small Step comes with everything needed to play in both beginner and veteran mode. The cards are nice and thick and have easy to read text and iconography. The cardboard used for the tokens is thick, which feels great in the hands, and the artwork is very easy to interpret. The wooden worker meeples have distinct shapes and even some screen printed features to distinguish between the administrators and engineers. The deluxe edition provides upgrades for each side including plastic satellites and crew pods to replace cardboard tokens, plastic administrator and engineer figures to replace the wooden meeple, and two astronaut miniatures to use for the scoring track. The game also has two expansion modules players can include. The Mission Control expansion adds new tiles to randomize and change the action spaces on the board as well as new mission and event cards. The Hidden Heroes swaps the base game personnel cards with new cards celebrating some of the behind the scenes heroes. The production quality of the game and the extras you get with the two expansions add a lot to the game experience. The plastic miniatures are sometimes hard to distinguish and the small satellite pieces tend to bend easily. The bright red and blue pieces add a nice contrast to the board aesthetic as well. 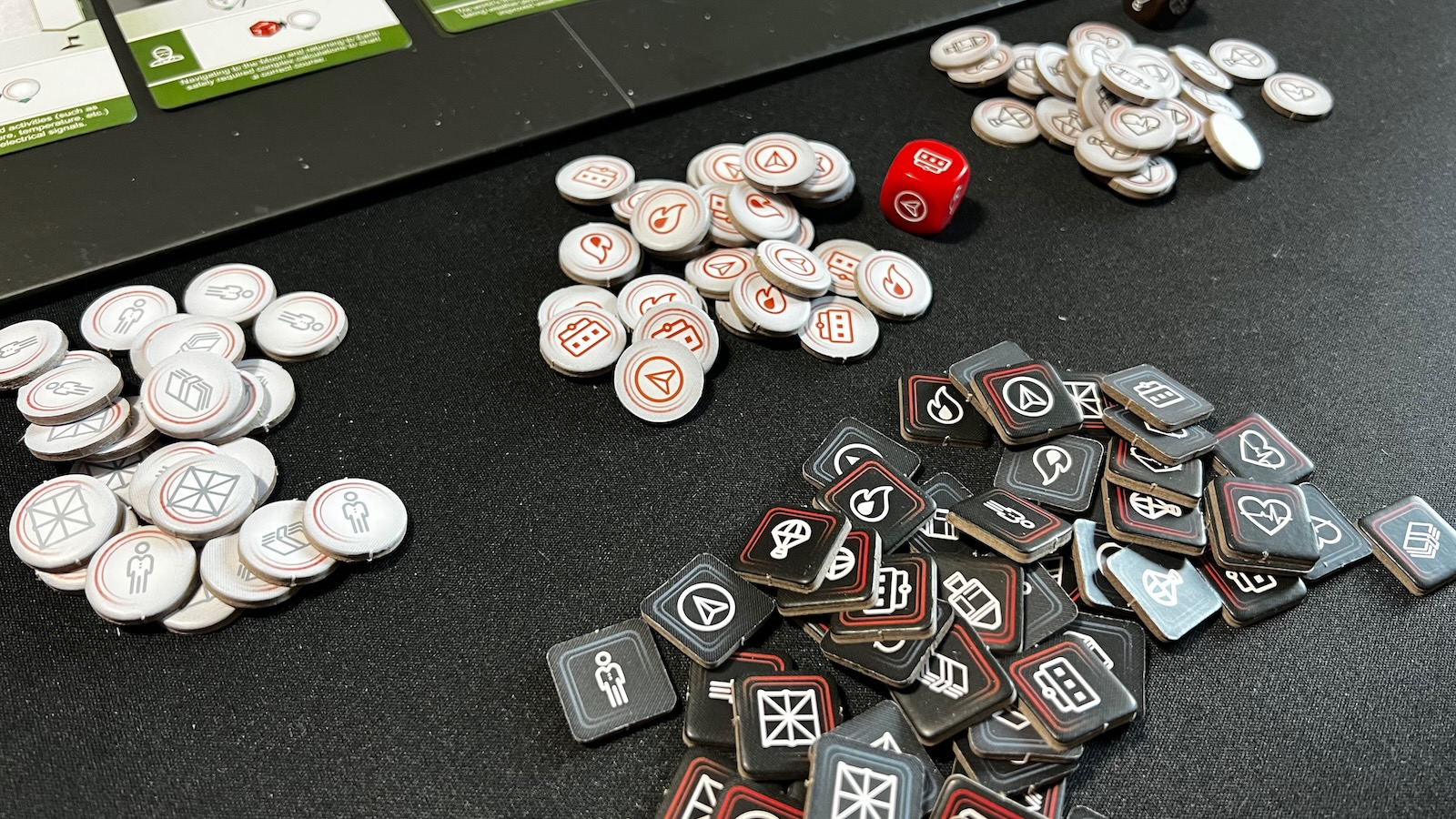 Overall, this game hit a special spot in my heart and brain. As a former history teacher, I loved the immersive feel of the game. Actions allowed you to mess with the other side in small but impactful ways. The missions you were launching felt like an advancement of your side’s agenda as you upgraded actions and built your permanent resource pool up over time. The other fact was this was a really good two player worker placement game. Thinking through what missions you could complete and where to place your workers was a fun puzzle. After one full round of play, it was easy to pick up the balance that had to be struck between player actions, which cards to pick up and play, and how to gain different resources. As a downside, the addition of more than two players is an unnecessary waste. As in other heavier one side versus another games, all more players do is split actions. Controlling all actions with one player was easy to manage and felt great with just two players in the game. Unless you want the true simulation of government departments making decisions in isolation of each other and watching the consequences, stick to the two player count. The other drawback to the game is probably the theme itself. Many space games today are flashy and sci-fi driven. This game is very niche and appeals to a history or current affairs lover. For some, this game would not have the bells and whistles to get it off the shelf.

One Small Step is for the gamer looking for an immersive, historical, and deep 2-player board game experience. Prepare to dive into the immersive world of the global Cold War space race.

Dan is a newly married educator from Colorado. Growing up as an Air Force dependent gained him lots of new perspectives on the world and a love for making new friends, especially over a good board game. When not at school or playing a board game, Dan is probably at the gym or a local sporting event. Dan loves heavy euros, adventure, and living card games.
Related Articles: One Small Step, Tabletop
Share
Tweet
Share
Submit