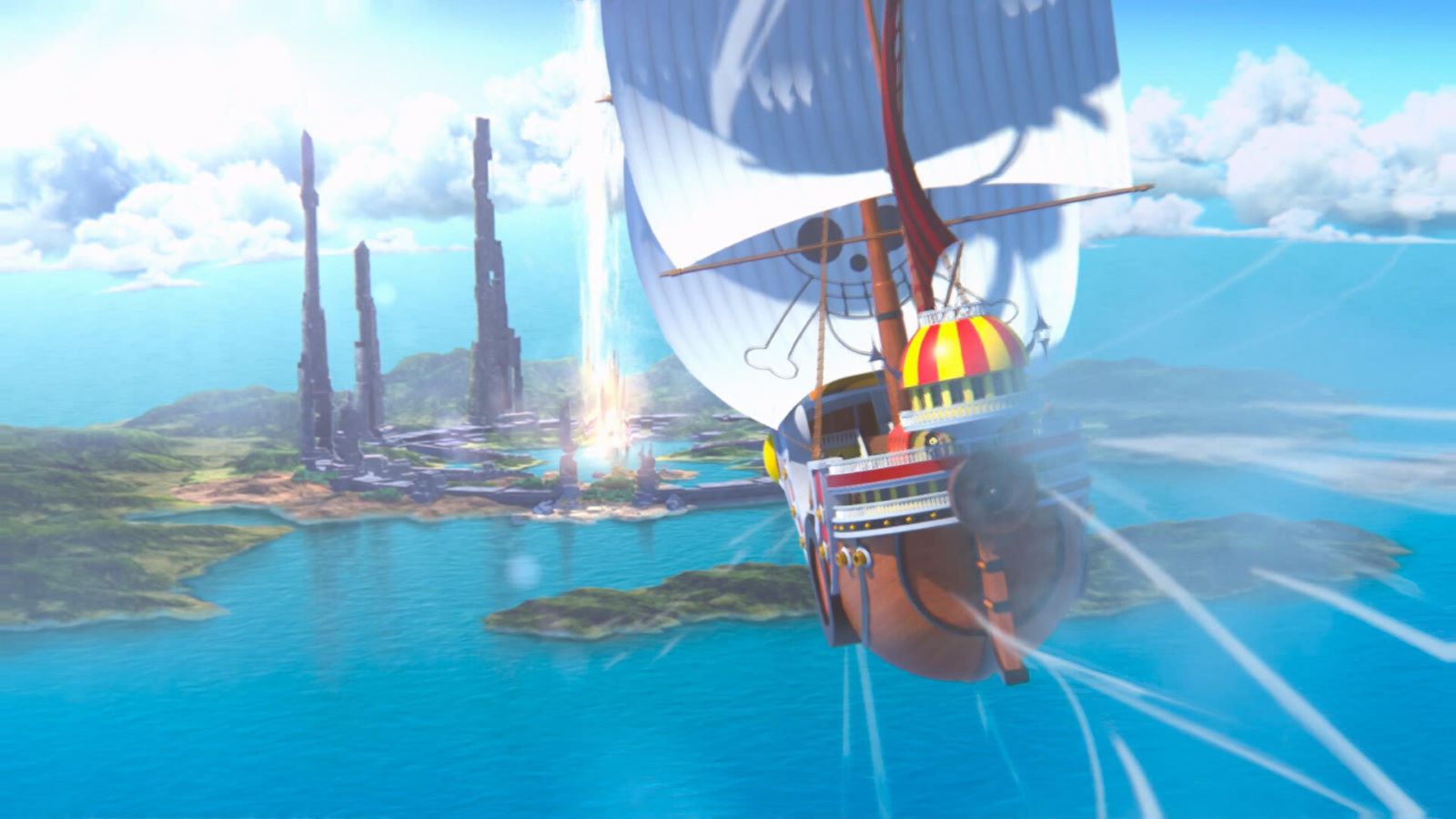 A few years ago, I had back surgery and was essentially stuck in a recliner for about six to seven weeks. This gave me the opportunity to finally achieve the longtime goal of watching One Piece. I binged the entirety of the series during that time, and its incredible cast of characters and phenomenal world-building drew me in like few series have. It’s important to give some background, so you can understand where I come from in regard to my knowledge and understanding of the series. In this review, I’m going to hopefully answer the two biggest questions this game poses to consumers. Is this a good RPG for those who haven’t seen the show, and is it also a good One Piece game? Let’s get to it. 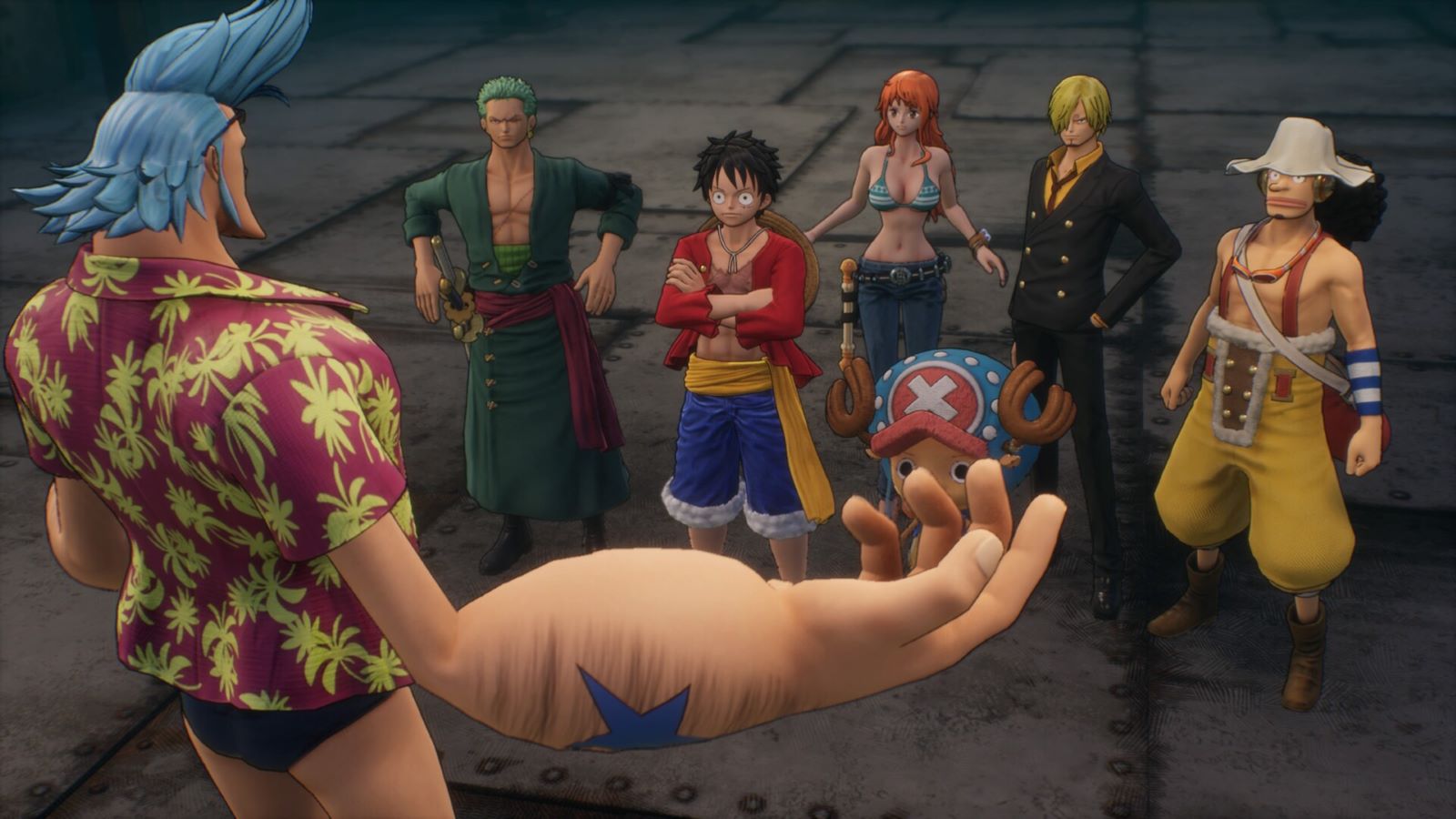 The story of One Piece Odyssey revolves around Luffy and the Straw Hats Pirates as they spot a mysterious island that piques their curiosity. Suddenly, a storm surrounds them and they find themselves shipwrecked on a beach and welcomed to the island by two of its inhabitants. Adio is a self-proclaimed explorer of the island, and Lim is a mysterious girl that’s been stuck on the island her whole life.

Fearful of the strangers who show up on her island, Lim removes the crew’s powers via memory cubes. The only way for Luffy and his friends to regain their powers and discover the mysteries of this unknown island is to travel through Memoria. Memoria is the past adventures of the crew that were major story arcs in the series. This time, however, things won’t play out exactly as they remember, as we all know how fuzzy and different our memories can be from the actual events. 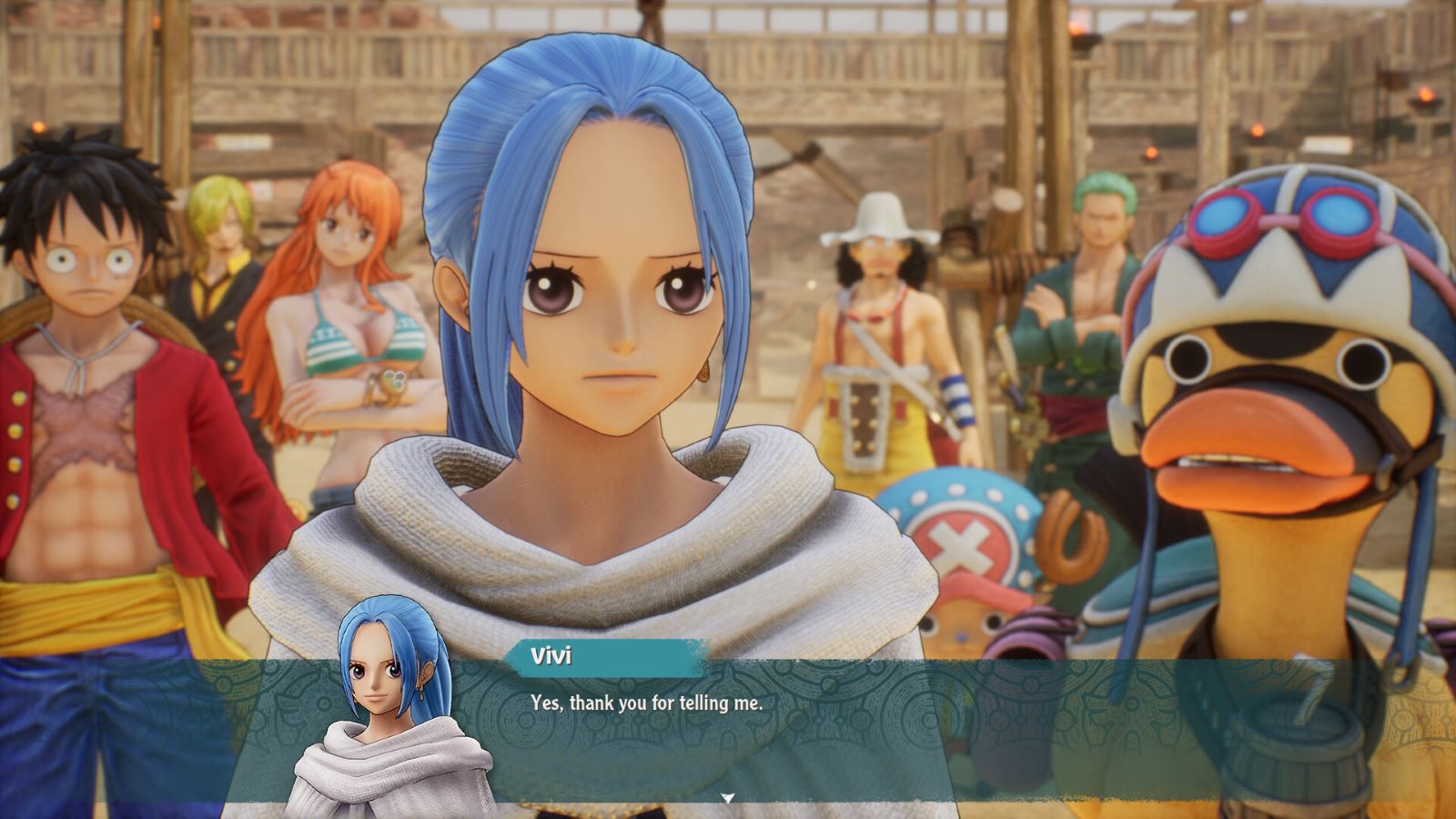 This is a fun idea as it gives those who haven’t watched the series condensed versions of some incredibly long stories, and also a fresh take on the fan-favorite adventures. Even if you haven’t seen the show or read the manga, players don’t feel left out of the story as the game does a great job of giving dialogue and explainer scenes to catch you up or fill in any missing gaps. Bandai Namco even put up full story recaps on their website for those who aren’t familiar with and want to learn more or if you simply want a refresher.

The story is well written and well executed for the most part. There are some pacing issues with some of the later chapters with Marineford especially feeling very rushed compared to Alabasta and Water Seven. The mysteries of Adio, Lim, and the island of Waford help keep you invested and intrigued even through some of those chapters. Both Adio and Lim are fleshed out and complex but never feel bigger than the stars of the show. Speaking of the Straw Hats, they are adapted wonderfully as each character is highlighted by their over-the-top expressions and individual personalities. Small details that seasoned viewers can appreciate are also thrown in, such as inside jokes and combat details like Sanji not being able to attack female characters. They are truly themselves and a great introduction for first-time players. The original voice actors’ inclusion was also a warm welcome. One addition I would have liked to the characters is more outfit options, as the series is known for its new outfits for each story arc. Only having two outfits available, with one of them being a pre-order bonus felt underwhelming. 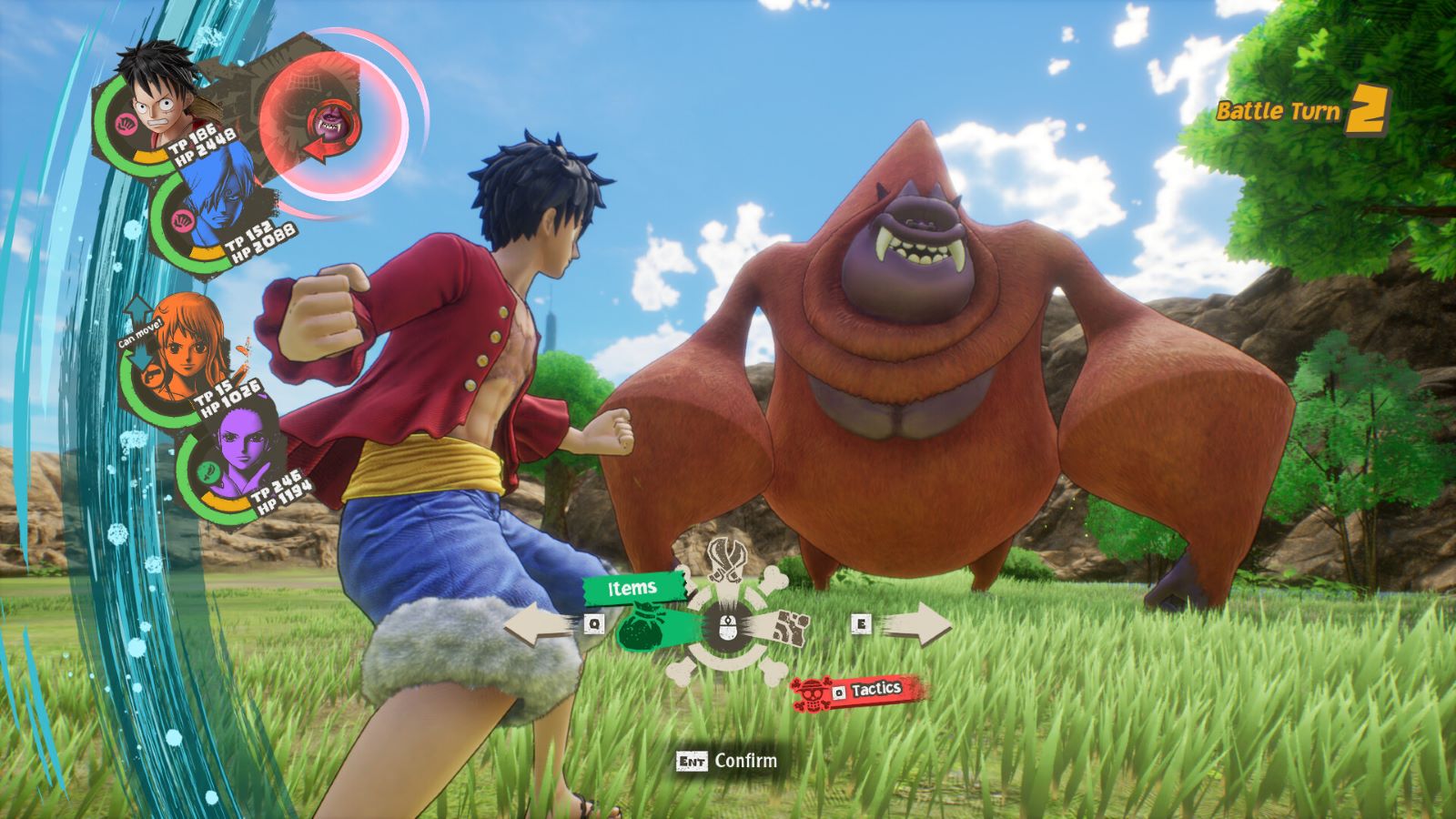 One Piece Odyssey at its heart is a turn-based RPG that has players spending most of their time in combat. Enemies are scattered throughout areas and players initiate the battles by running into them as you are exploring and progressing the story. The game uses what’s called a scrambled area battle system. You start with four active crew members in your party that are spread out into smaller groups with different enemies. If one party member takes out the enemies in their area or uses a long-range special skill, they can attack a different group of enemies in a different area. I really enjoy this as it keeps characters mobile and not standing in one position every battle. It’s a unique dynamic and a big reason I never got bored after 400-plus battles.

There are four main options during battle. Party members can use normal attacks, special skills, items, or bond arts. All characters have attack types that are either power, technique, or speed based. Each type is strong against one and weak against another. It is similar to rock, paper, and scissors, and makes for great strategic choices when picking who to face specific enemies. Special skills are higher damage attacks that require TP (Energy used for special skills) which you gain from performing normal attacks. The flow of switching between attacking with normal attacks and special skills keeps battles from being stale as managing your TP for bigger enemies is always in your mind. Items are the same as most RPGs that can heal you or give debuffs to enemies or groups. The last option is bond arts which are big team attacks that do massive damage. These are far and away my favorite to use as they usually output the most damage, but also are visually incredible. 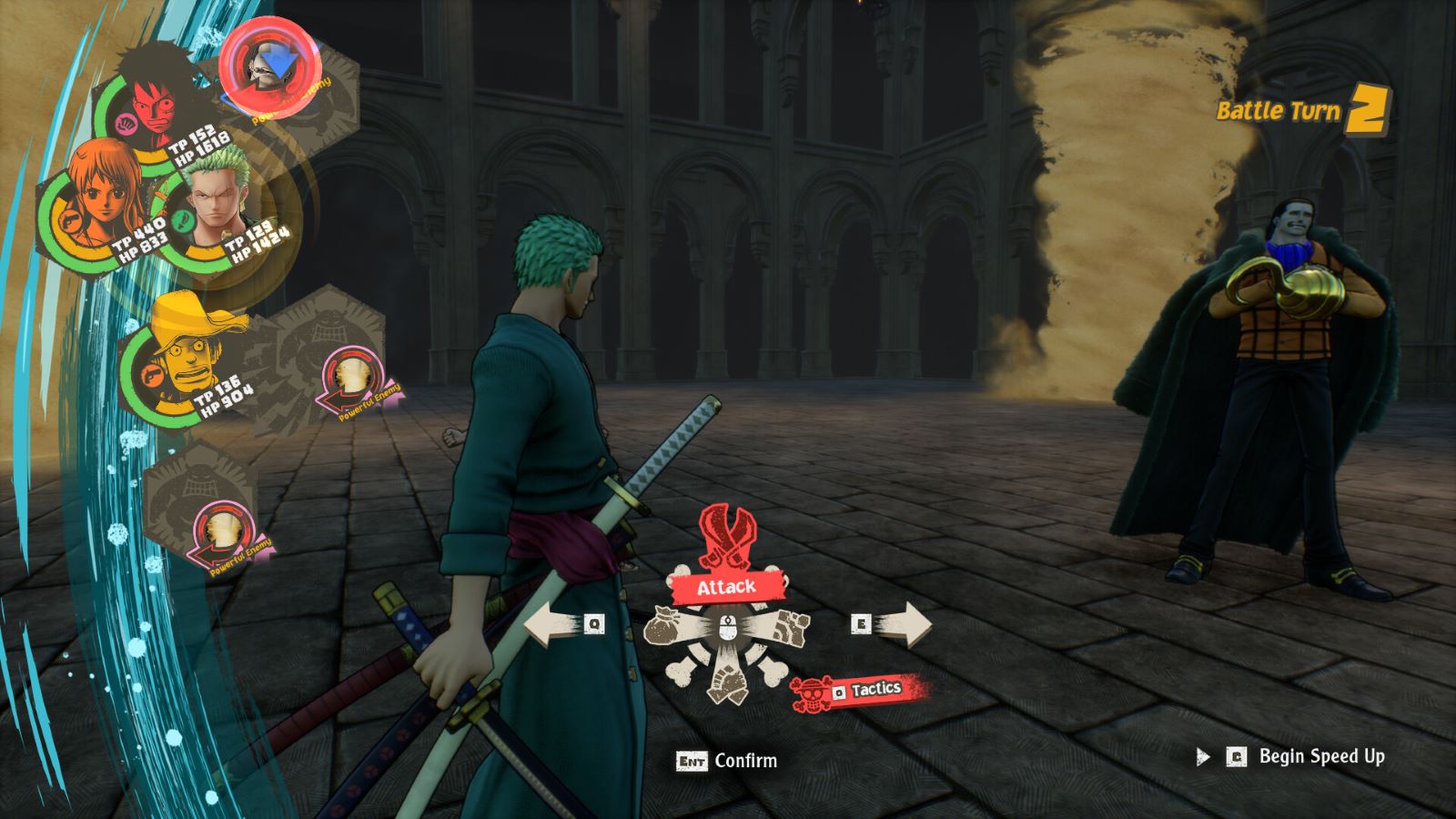 While the combat is fun and flexible, there are some critiques I have. The game doesn’t have a difficulty setting, and while the difficulty did increase some towards the final chapters, most of the game is fairly easy. Implementing a difficulty setting would help make each battle feel more engaging and rewarding as a majority of the time you’ll breeze through with minimum effort. There is a post game side quest you can complete after the main game that significantly puts your skills to the test against some incredibly difficult boss fights. That was a great surprise for me as I was hoping for some level of challenge and strategy. 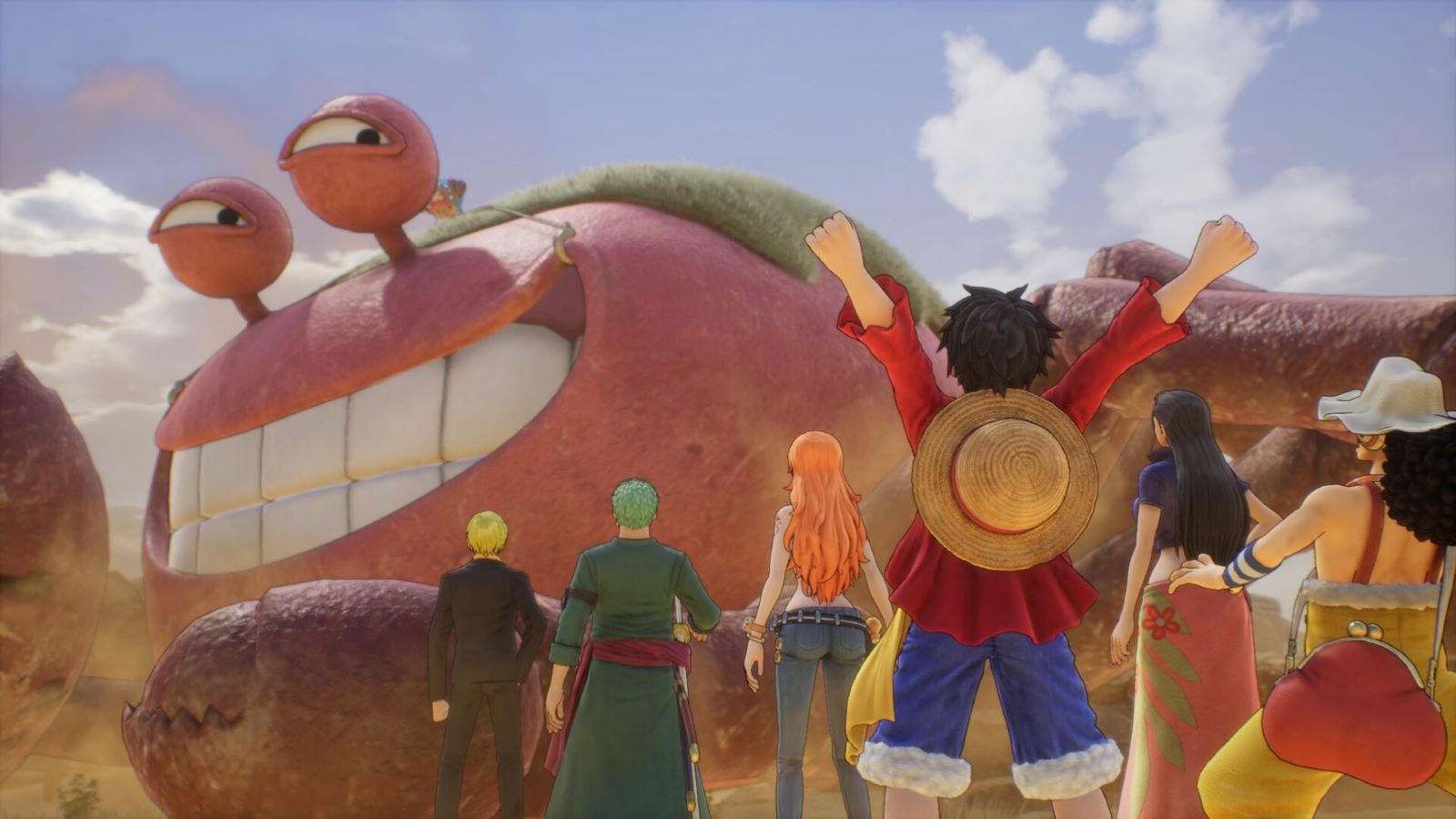 Exploration is a big part of RPGs and while One Piece Odyssey doesn’t do the best job of realizing its full potential, it does make cities and dungeons worthwhile to explore. The cityscapes are shown in great detail and the dungeons each feel different even though the first couple you explore aren’t the most expansive. There are items you use for crafting hidden throughout almost every area, and each character has its own field action that helps you find exclusive materials. This makes the job of hunting down materials fun as swapping between characters changed up the monotony of searching every side street and hidden area.

One Piece Odyssey excels in every aspect of an RPG, while also being true to its source. The combat is fun and accessible which serves as the foundation of the game. I’d recommend it to anyone who has never played a turn-based RPG and is interested in exploring one. The islands you explore each feel unique while not overwhelming in size. The story represents what makes One Piece special and memorable. To answer the question asked earlier, One Piece Odyssey is both a good RPG and an exemplary One Piece game.

One Piece Odyssey took on the tough task of being accessible to those who don’t know the source material, while also catering to the fans of the franchise. At its heart, One Piece Odyssey is a love letter to the fans, but that doesn’t stop from being a fantastic gateway into the world.

Noah is the resident weeb who spends most of his time gaming and watching anime. His goal is to expand his skills while meeting new people. You have probably seen him feeding the other team kills in Overwatch Comp or speculating Star Wars and One Piece. Follow him on twitter @RigsbyNoah.
Related Articles: One Piece Odyssey
Share
Tweet
Share
Submit