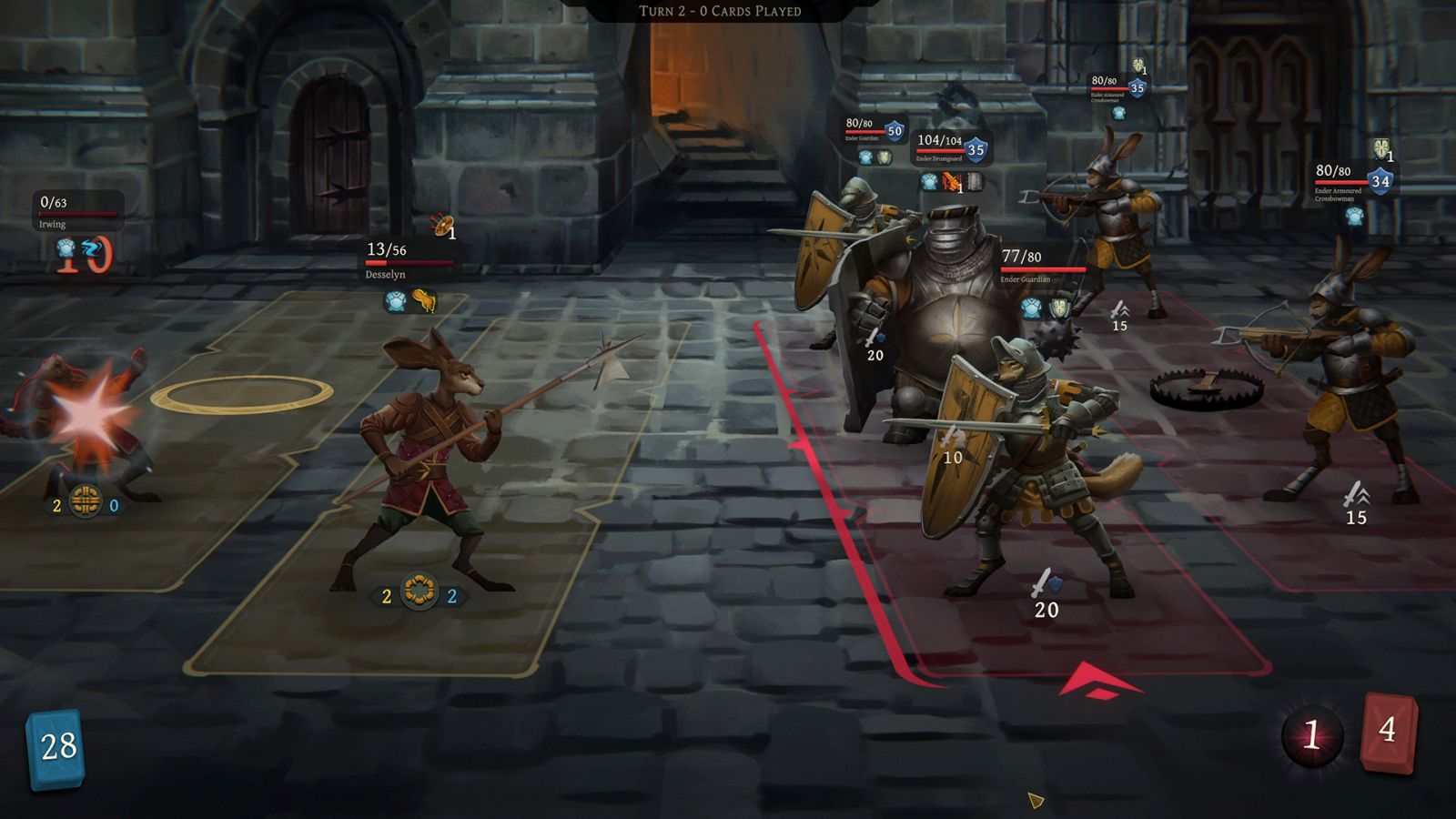 The benchmark for any roguelite is how much it can pull you back in for “one more run.” Banners of Ruin succeeded in that regard for my first few hours of playing, but after that it quickly began to outstay its welcome. The main problem I have with Banners of Ruin comes in the length of its playthroughs, the absurd health pools of its enemies, and some frustrating passives that the enemies employ only in the final battle of the game. I will talk more at length about these problems further down in the review. For now, let’s talk about what Banners of Ruin gets right about the deckbuilder roguelite genre.

Banners of Ruin sees you playing as members of House Blackfoot, a clan bent on taking back the throne from House Ender who seized power through nefarious measures. That is pretty much the extent of the story, and that is gleaned through the game’s description. The rest of the story is only hinted at and implied through the game’s various choices which illuminate the harsh rule of the Enders and allow you to either gain moral high ground (and some nice loot) or stoop to their level and profit. While morality is hinted at as if it is important, I never felt adequately rewarded for going out of my way to help people, especially in a rather long sidequest chain that ends with a fizzle. After fighting my way through swaths of enemies to free some prisoners for an ally, I was not rewarded with anything for my trouble, and in fact I was far worse off than when I began my journey. 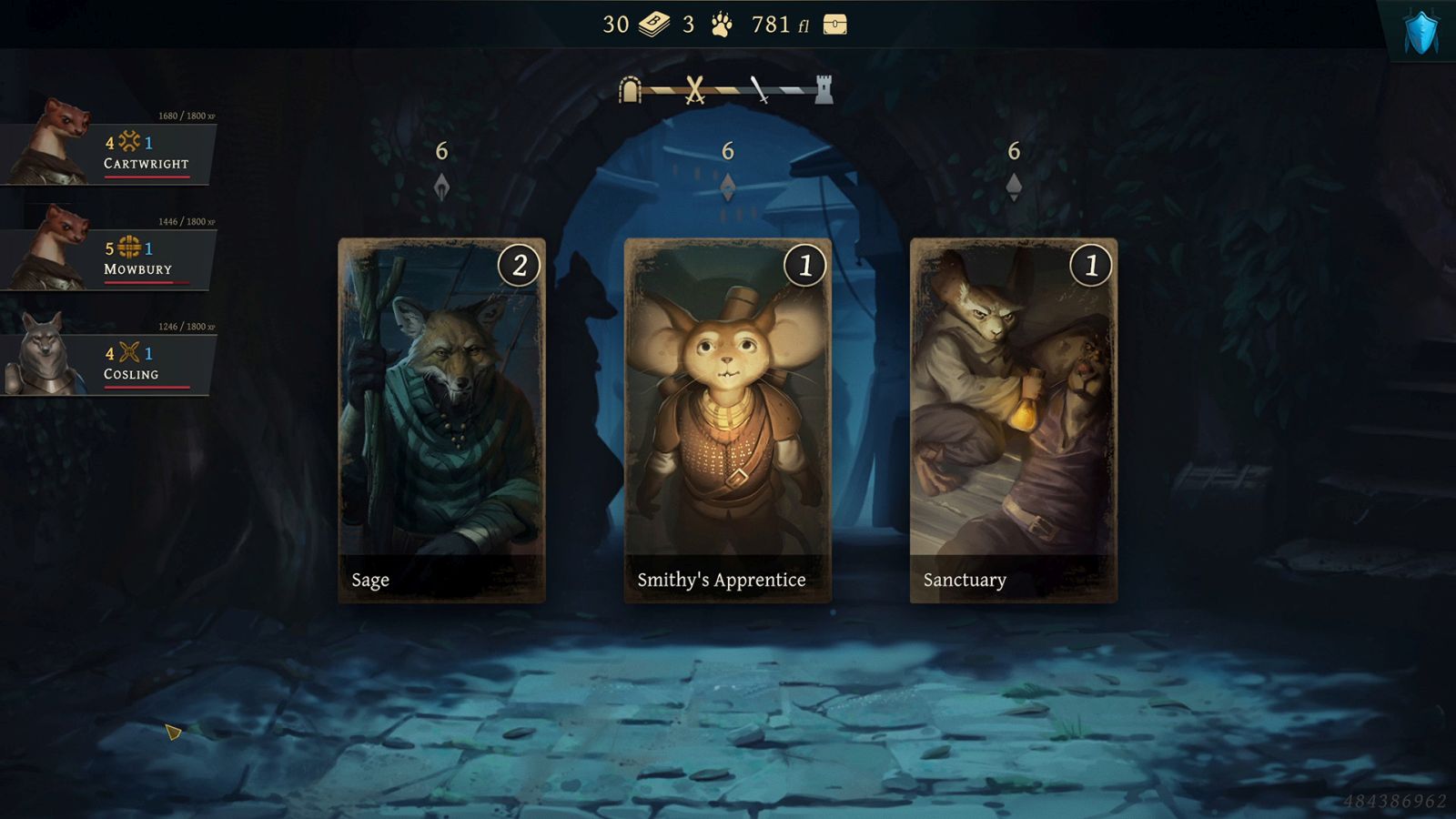 Still, the ability to make choices that are meaningful and offer up different rewards is mostly present in the game’s “overworld.” Rather than making your way through a world map, the game has you making decisions by clicking on cards that represent different pathways that your characters can follow. When playing the game there are three “streets,” each with their own card and timer on that card that shows when that choice will be made unavailable. For example, one street will offer you an upgrade that you can apply to any card in your deck, while another will offer combat and yet another will allow you to get rid of a card in your deck. Each path is interesting in its own way, but which choice you make will depend on your current state. If you are happy with your deck and cards, you may choose to upgrade an existing one rather than risk your health to get a new one through combat, but then again you may want to slim down your deck to ensure your best cards stay accessible. All this is to say that the street system has you constantly making meaningful decisions in the early stages of the game. It is a system that immediately reminded me of Persona 4’s Shuffle Time minigame, as some encounters allow you to increase the timer of others, keeping them around for longer as you choose other paths in the meantime. These decisions may grow easier after you progress further into the game, but the sense of strategically choosing your path to create a good deck is never lost. 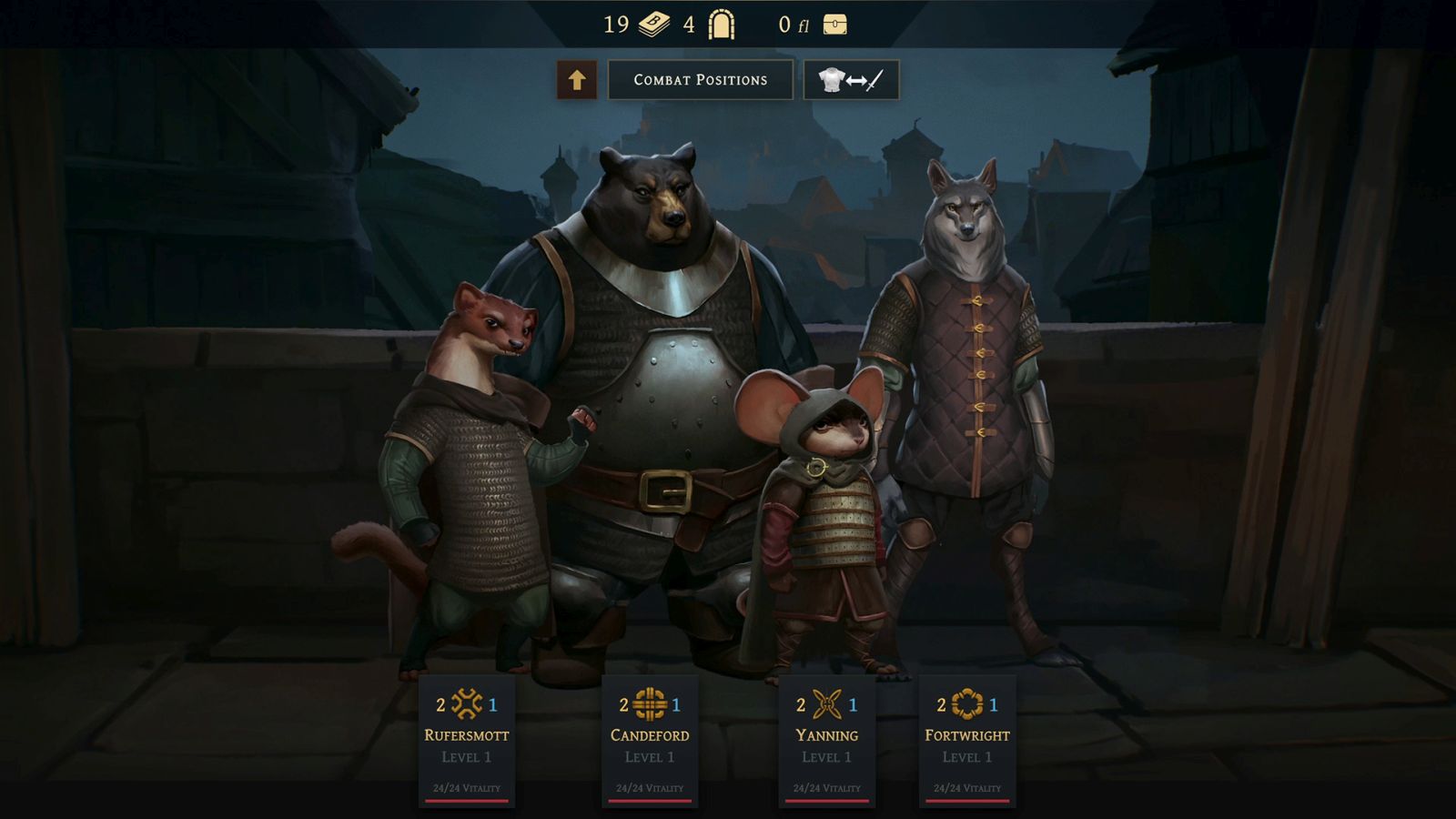 Another shining aspect of this game is the character design. The anthropomorphic animals here are gritty and exaggerated in their features, like something from an alternate reality Disney movie. Each species has its own character, and even within the species, the animals are differentiated by their excellent costume design that keys you into how strong they are before ever looking at their health bars. Bears exude tankiness and strength which matches up with their passive and talent abilities, while mice are small and nimble in design, lending itself to their abilities to unleash multi-hit attacks.

The sound in this game is also great, adding to the atmosphere of the game, building tension in the hardest battles and highlighting key moments of progression with nice musical cues. While no specific track or noise stood out to me, the sound helped to bring all of the game’s elements together with a unified theme.

Combat is the make-or-break for this game and it may not be exactly what lovers of the genre are hoping for. What starts off as short, snappy and fun, turns into long drawn-out matches by the end of each run. This makes each run take extremely long to finish, and discourages the player from wanting to take on another run at the risk of sinking hours into a run that is very dependent on randomness. Very quickly, you begin to realize which card synergies work, and which ones seem to be the most powerful. You also see which passives work best for each animal race, and there are definitely passives that work far better than the others. Weapons and armor add additional variables to the combat, and each weapon seems to complement a specific playstyle with some increasing the power of multi-hit attacks and others allowing you to target entire ranks of enemies at a time. There are many choices of armor to equip, but the further you progress into the game, the less interesting these armor choices become. You’ll find yourself wanting to experiment with builds less and less as the difficulty of encounters increases, and you start to play it safe. Having a run where you do not get the weapons, cards or passives you need to succeed makes the run much harder, in a way that does not feel earned. 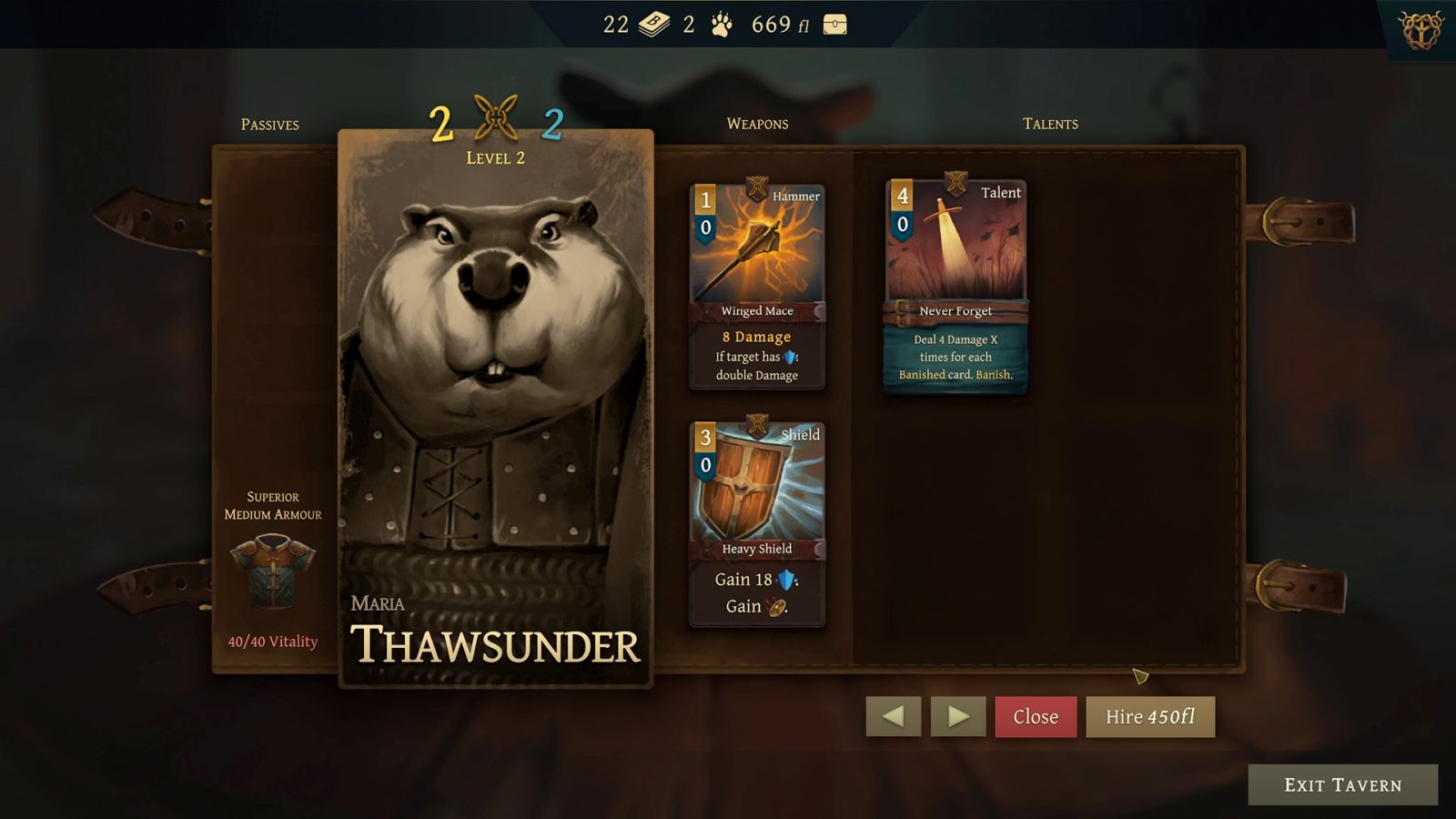 Additionally, at the end of each main section of the game (of which there are three), there is always a boss with a huge health pool and a unique gimmick. The first boss can either be one that is not too hard to dispatch, or he can be one that automatically poisons each of your party members at the start of the match and has two allies that are all hidden behind barricades with 30 defense each. This match is so unfair as poison constantly stacks in this game, meaning it starts off by doing one damage a turn and then goes up to 2 and so on. Even if you defeat this boss, it is unlikely you will have much health left by the end of the encounter, so you are robbed of the choice afterwards to take other rewards except for a full health refresh. Gimmicks like this abound in the game, and the final boss introduces a mechanic that is so egregious I cannot believe it made it into the final cut of the game. One character on the final boss’ team has a passive that automatically removes each card you play at the start of every turn. This can devastate your deck that you’ve spent the entire run creating and it is incredibly frustrating to deal with. Of course you can target that character to dispatch him as quickly as possible, but he has a massive health pool just as every single other character does in the final battle.

Frustratingly, each run has you start off with two characters from the races that you can unlock as you progress through the game, and there are only three opportunities to recruit any other characters before reaching the final boss. The game feels unbalanced due to the overpowered nature of some of its bosses in particular, which is a shame because a majority of the game’s combat is deep and engaging. This is not a complaint about how difficult the endgame is, rather it is one that the difficulty of the endgame is created artificially by having insane health pools that are only made even more frustrating by the enemies’ tendency to increase their shields to ludicrous levels. Some people will probably find things to like about the game’s final encounters, but I was disappointed with my experience.

Progression through different runs is a nice addition to this game, and one that we have seen more in this genre as popularized by games like Hades. Here you can unlock access to different animals to start out with, based on your experience level, as well as new talents to unlock on your existing animals throughout your runs. As you play more of the game, you also unlock Oaths, which allow you to change specific difficulty levels to increase the amount of experience you make from each run. Some of these options allow for you to increase enemy health or cause a fail state when even one of your characters dies. These Oaths allow for interesting modifiers to each playthrough, but I do not think they are all that necessary as experience comes pretty naturally through normal runs. Still, they are a nice addition for those craving more difficult experiences.

Banners of Ruin is a fine addition to the growing collection of deckbuilding roguelites, but in such a massive market of similar games, only its unique art design and interesting choices make it stand out from the crowd. The combat is fun for a few hours, but quickly becomes grating as you begin to see through the cracks.

Banners of Ruin does a lot of things right, but its combat quickly grows stale as you progress further into the game. Enemies become tanks capable of dealing massive damage and the game’s difficulty becomes largely artificial, no longer rewarding strategic moves as you become overwhelmed by the enemies’ numbers, stats and passives. The game is really fun in the first few hours, but once you have learned the ins and outs, you realize it has already played its hand.

Noah Anzaldua is a game journalist, Twitch streamer, and a passionate fan of Apex Legends and Destiny 2. Writing and streaming are his passions, and he is carving a career path out for himself. He is a graduate of the University of Alabama where he is majored in News Media, History, and Political Science.
Related Articles: Banners of Ruin, Indies
Share
Tweet
Share
Submit