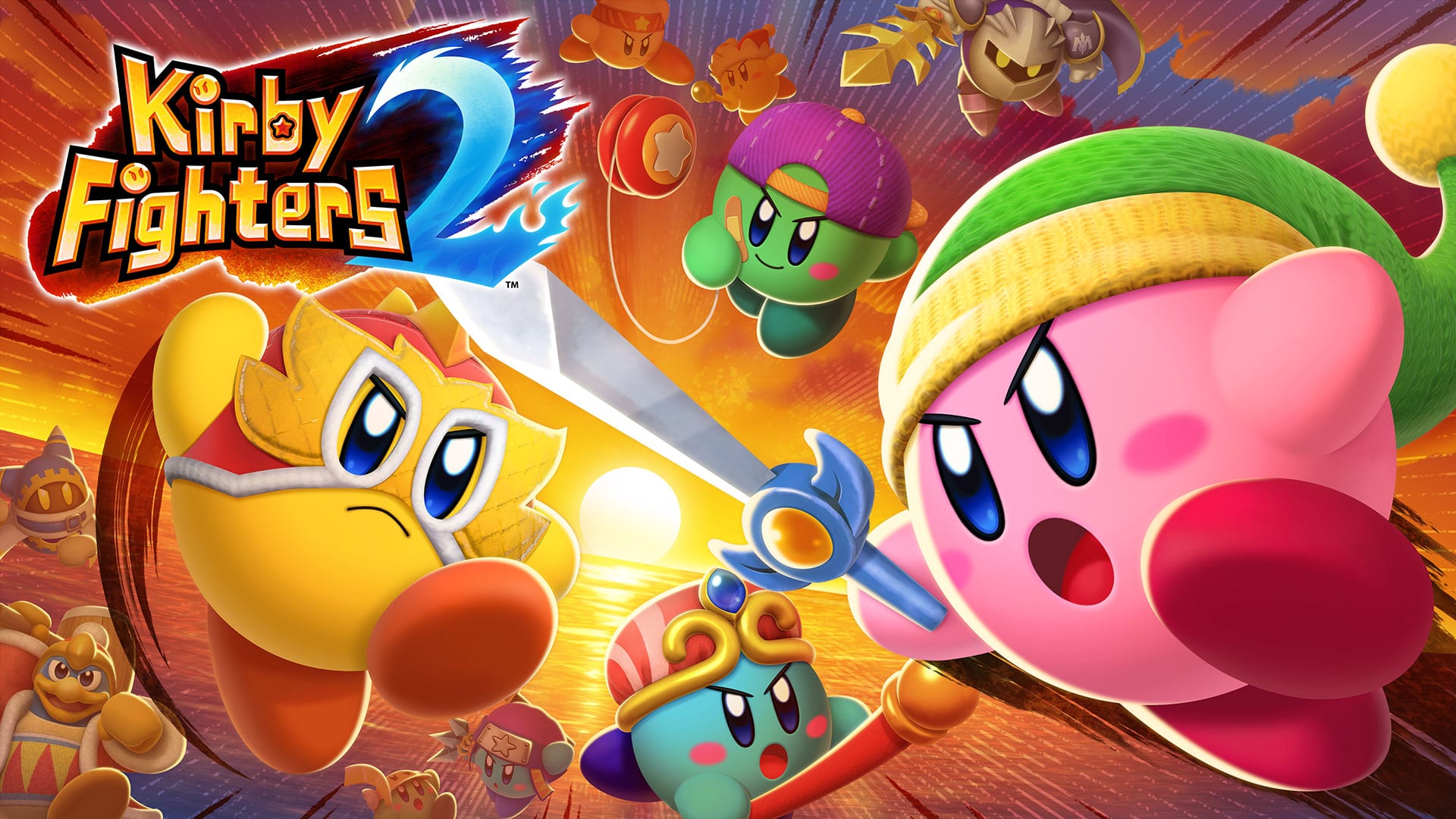 Kirby Fighters 2 is such a basic game. You load the game, and boom! Title screen. Press start, boom! Menu. Choose a game mode, boom! Character selection screen. The moves are so basic, it makes Super Smash Bros. seem complicated. But despite the lack of flair in its presentation, I have had fun playing one mode, in particular: Story Mode.

Story Mode makes you choose a Kirby and one AI; or a friend can take the AI spot. There are 22 characters in all, including unlockables, and most of them are various Kirby abilities from different Kirby games. There are abilities like Water Kirby, Parasol Kirby, Beam Kirby, Staff Kirby, Bell Kirby, Archer Kirby, and on and on. Each utilizes the same basic input commands like Super Smash Bros., except the B button is the only attack button. But each Kirby executes different styles of attacks depending on which you choose. No “Echo Fighters” here.

In Story Mode, your goal is to reach the top of a tower, Mortal Kombat style. You fight other Kirbies floor by floor (Bandana Waddle Dee, Gooey, and Magolor appear as enemies and playable fighters also), and take on occasional floor bosses (Twin Whispy Woods say “hello”). The tower is separated into five chapters, each chapter opening more floors to pass as well as increasing difficulty. It can take close to an hour to reach the top when tackling the final chapter. Thankfully, fights last under 2 minutes so it doesn’t feel as long as it sounds. You can also create quick save points in case you have to cut your run short, which is great if you’re playing on the go. 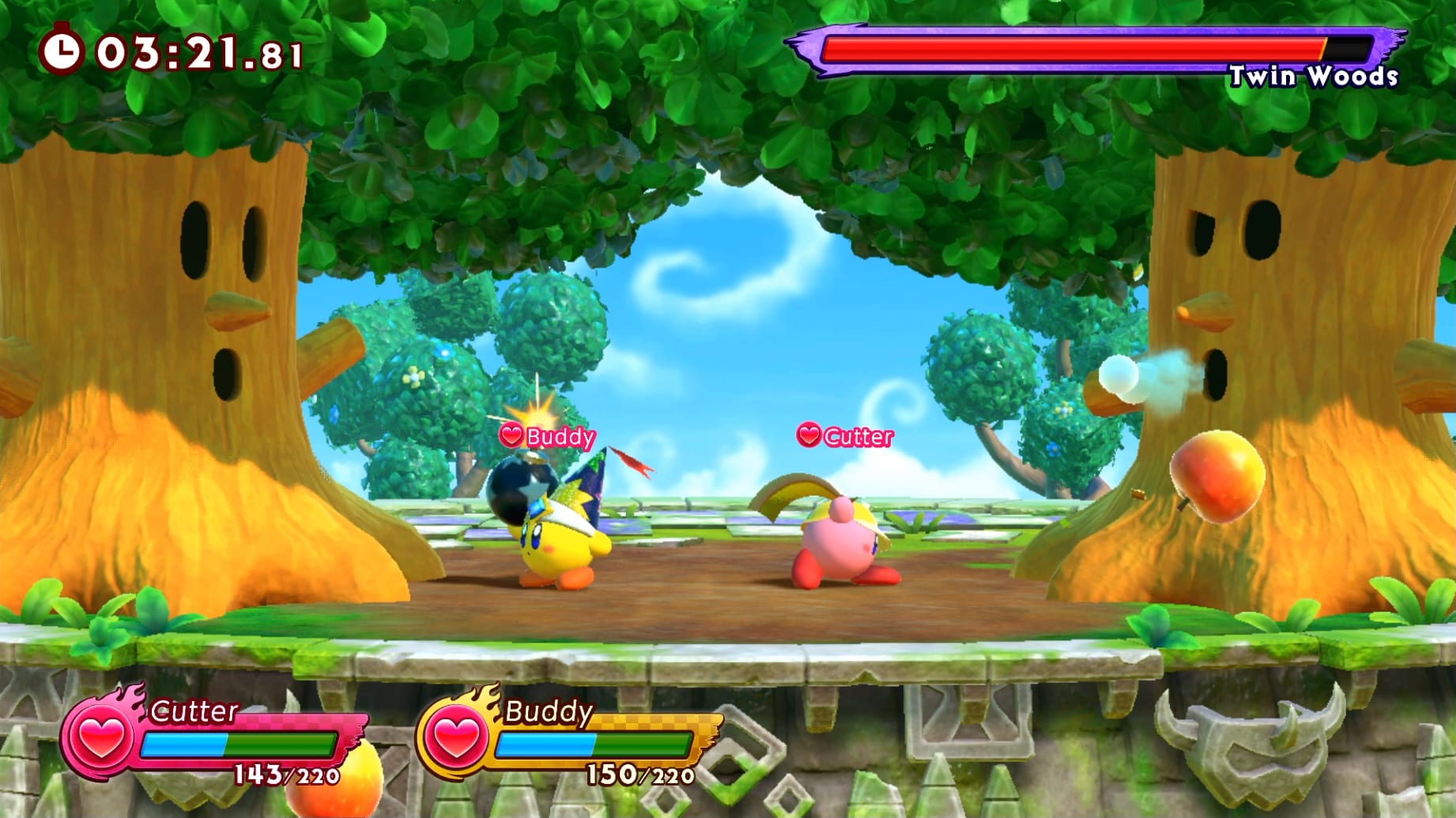 Attacking is as simple as pressing the B button and one of four directions on the d-pad or control stick. But you use a lot of forward B or neutral B attacks, so you end up dancing around the stages using some variety of those inputs and that ends up desensitizing your amusement. It shows that Smash’s inclusion of one more attack button makes a big difference, even though Kirby Fighters 2 could have more variety if Hal Labs included more midair attacks.

The longer you play, the more rote combat feels. I didn’t have any friends locally to play with but two of our editors, Elisha and Sean, also have the game and I wish there was online with Story Mode so I had the chance to play the game with them. That would have helped preserve more of the fun while playing.

But there’s one reason I keep coming back to play Story Mode: “Stones” – power-ups, basically (there’s Stickers, Badges, Rings, and more also, but we’ll call them all Stones for now). These are randomly generated collectibles you gain after every floor you pass. They can increase your health, strength, charge speed for charge attacks, increase damage against boss battles, extend match time, etc. You have three options (there’s a Stone that allows up to 4) and every round you can only choose one; but they last until your tower run is over.

It feels like a card game. Your deck is the Stones and your opponent’s deck is the various enemies on each floor. You have to choose a Stone that suits your current situation, but you also have to think about potential enemies you’ll fight in the future. 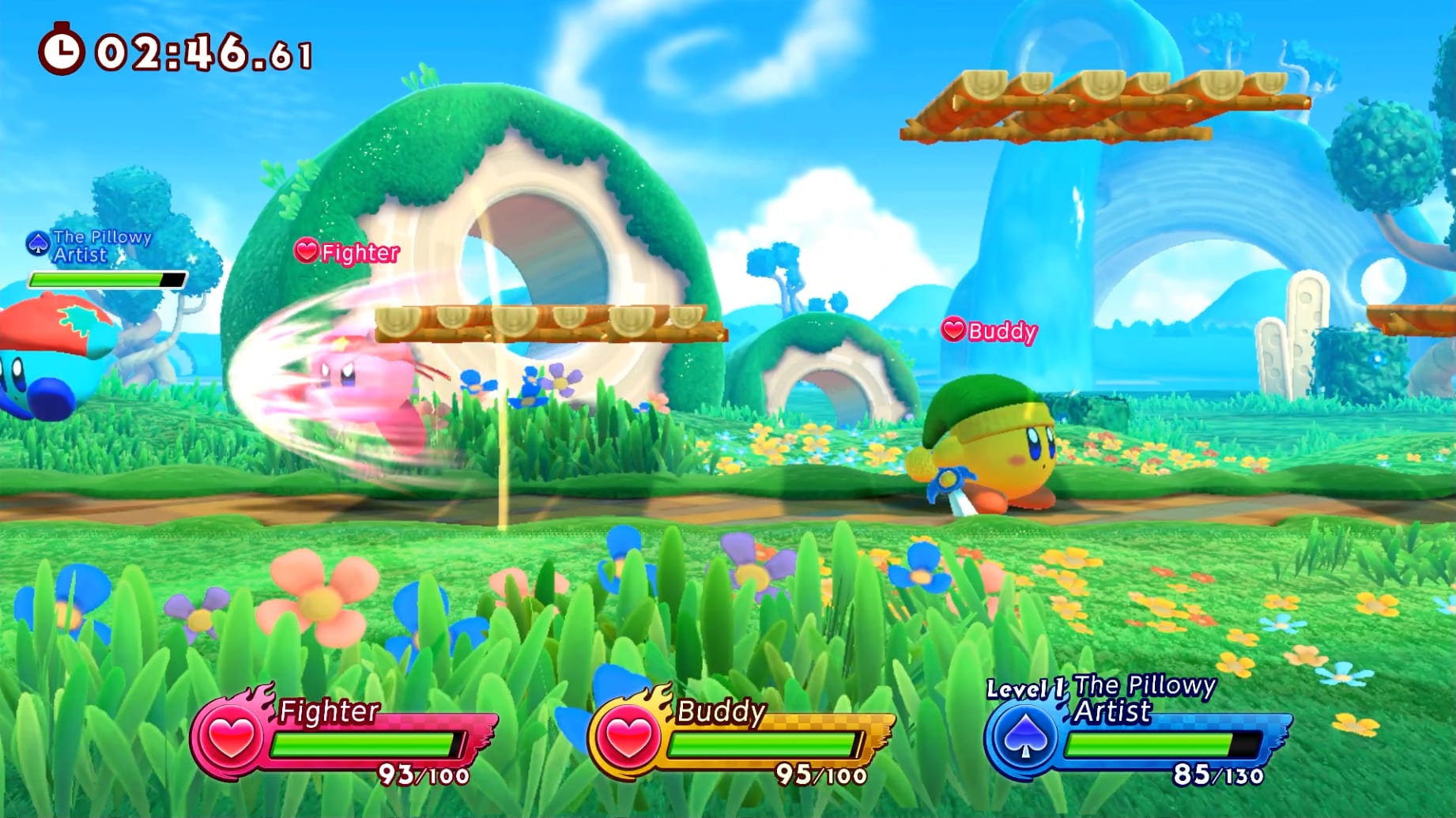 It gets wilder in the last chapter because it basically turns into a rogue-like. You have to ascend all the floors with three lives. Lose them and you have to start from the beginning. I’ve done it twice but that’s after 20-plus tries. It’s masochistic at times because you need a Stone and it won’t show up, but there’s pleasure from trying to succeed regardless of what you’re given. However, there are a few Stones Hal Laboratories needs to tweak. For example, the Boss Stone is a must by floor 12. Bosses have way too much health and the Stone is considered rare, making it show up less often than other Stones. You might as well start over if you don’t have one by then. Hal Laboratories needs to patch boss health a little bit so it’s still time-consuming but not impossible.

The rest of Kirby Fighters 2 includes four other mundane modes. Battle Mode lets you play with up to four friends or four AI. You choose your character, fight in a team or free-for-all, play the match, and it shoots you back to the character select screen after a short brag dance that’s always the same. It’s boring when playing with just AI after a while, thanks to the overly-simplistic mechanics, but friends would make this better. Thankfully, you can adjust the rules. And just in case you can’t find them like I couldn’t, they’re on the Battle Type screen at the bottom.

Like Super Smash Bros., there are items and stage hazards but each of them intervene too frequently, particularly the stage hazards. They’re annoying in every mode. Turn them off unless you want that masochistic vibe. 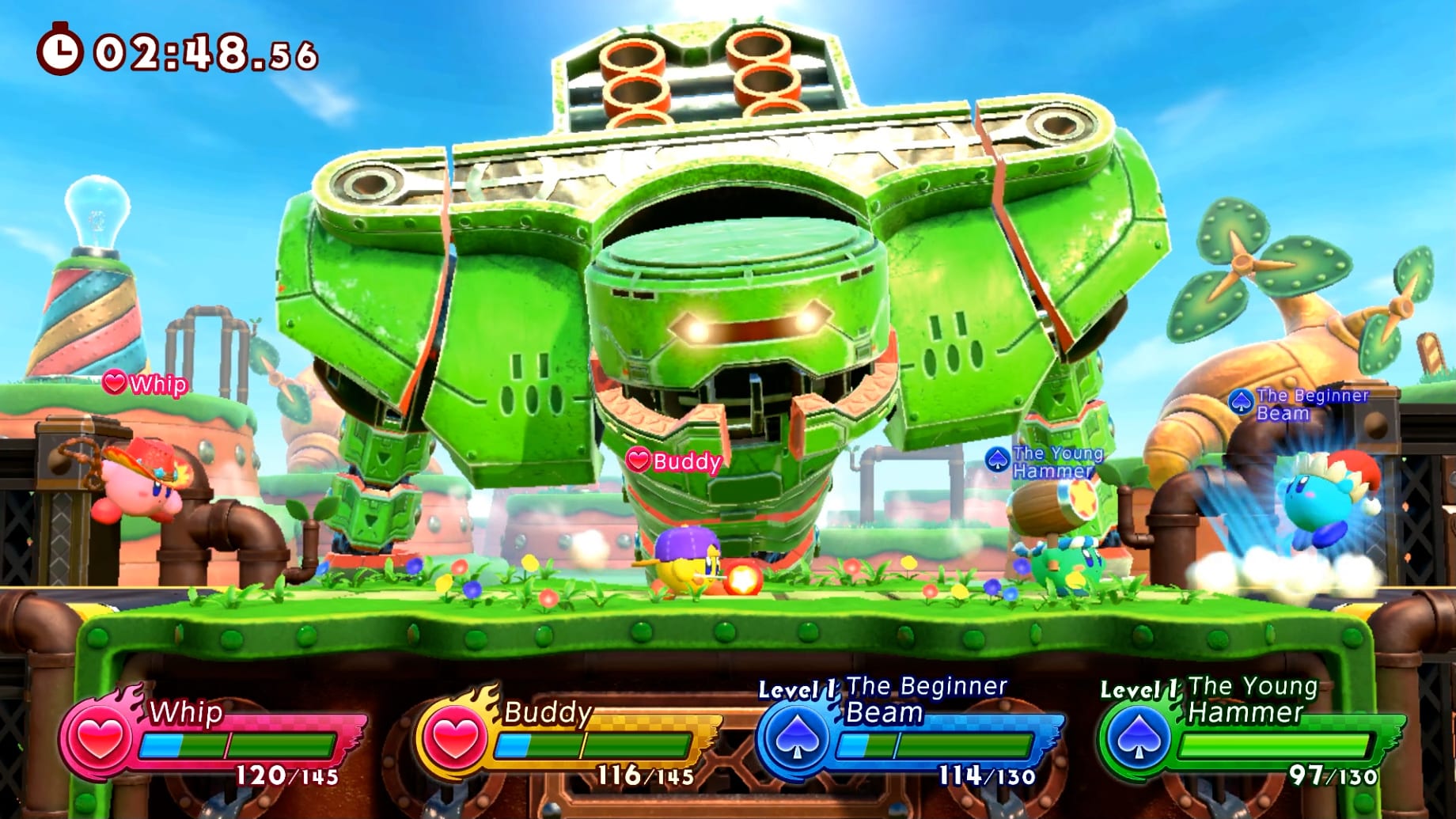 Then there’s Online Mode. It’s as bad as Super Smash Bros. in terms of connectivity. Expect lag, slowdown, and input delay. Additionally, there’s hardly anyone who plays online. I played the same people over and over again for an hour and I finally had enough. What’s worse is that everyone uses the same two attacks for their character. It’s not because they’re cheesing, it’s because you only have, essentially, six attacks to start with, so whittle that down to your most optimal two or three moves and you’re ready for online play. But it’s not worth your time.

Single-Handed Mode is the next best mode after Story Mode. Fight nine rounds of Kirbies as fast as possible on Easy, Normal, or Hard difficulty. That’s it. If you lose, you can retry all you want, but each round counts towards your total time played. I like the concept, but stage hazards and items turn the mode into lucky draws.

You can also play locally with friends who own their own copy, but that’s no more interesting than Battle Mode. The major difference is you can actually punch your friend if things go sour. That might be a selling point for some of you. I can feel it.

Kirby Fighters 2 achieves nearly all of its glory in Story Mode, but there’s still some fun in short bursts if you have friends to play with or enjoy the time trials. Skip online unless you’re playing with friends. But even that risks your sanity.

Anthony Shelton started his journey in games media reading Nintendo Power, writing mock reviews, and writing E3 exposes. For fun. He grew up in the arcades playing with strangers and friends, and in the garage with his Commodore 64. He loves playing co-op and multiplayer games, but has no problem crushing your soul in any competitive game he enjoys.
Related Articles: Kirby Fighters 2
Share
Tweet
Share
Submit