There are some people who can make the best of bad situations, with some of them even finding diamonds in the rough. It could be realizing that you may have lost something, but not everything, or even discovering that something old and broken can be fashioned into something else useful. One group that knows this all too well is the Scavengers — the stars of the roguelike twin-stick shooter Danger Scavenger. This group collects any scraps that they can after their fights and turns them into useful upgrades for later. They say one man’s trash is another man’s treasure, but it takes a deadlier turn in this case.

Our story takes place in a cyberpunk city that is in the middle of a machine uprising. It turns out that an evil A.I. named A.I.O.N.E. has decided to revolt and has influenced other machines throughout the city. The Scavengers were the first to determine the source of the chaos and are now fighting to take down the machines. There are five different corporations they must target and dismantle in order to collapse the uprising, but it won’t be easy. Each building has about 15 floors of various enemies, with a 16th floor being the boss of that building. After you’ve defeated a boss, you head back to your hideout and prepare for the next building. That being said, this is a roguelike, so if you die at any point, you have to start over. And in true roguelike fashion, that means starting from the very first building. I’m all for the roguelike formula, especially in games like The Binding of Isaac, Enter the Gungeon, etc., but there’s so much to complete in what’s essentially one life. Personally, I could only make it partway through the second building before dying. Even then, that was still 15 floors of enemies, a tough boss battle, and around 4 more floors after that. Sure you can save between buildings, but that’s only so you can turn off the game and come back later. 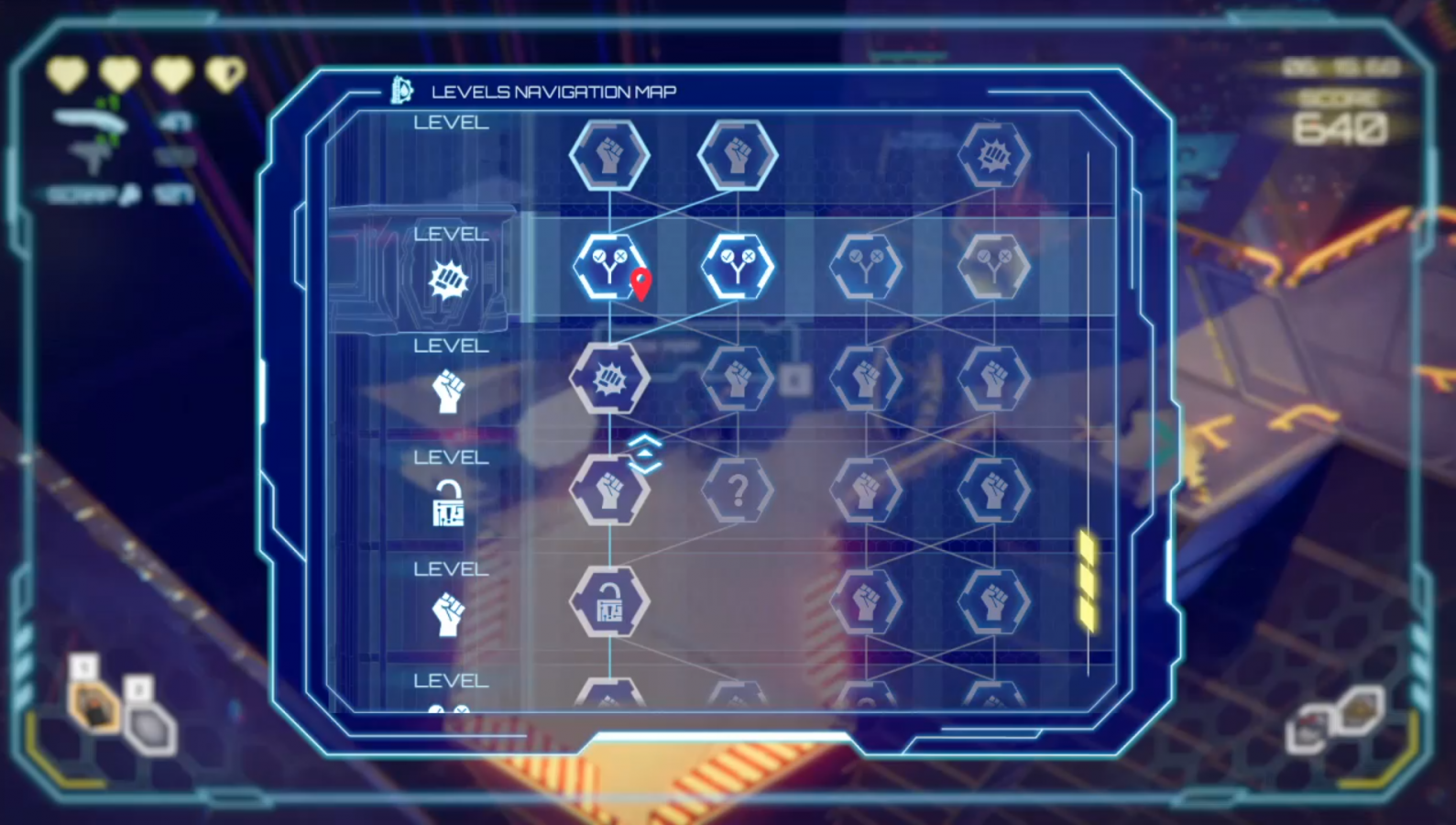 The gameplay is your typical twin-stick shooter, so you can move, shoot, dodge roll (or dash depending on the character), and use one or two special tools. You can carry two weapons that you can swap between at any time, which helps you switch up your fighting style if needed. You can carry shotguns, uzis, katanas, frying pans, bazookas, sniper rifles, and more. You’ll have one starting weapon, but you’ll find more in chests throughout the floors that you fight through. I chose to start with a shotgun whenever possible because I love how powerful it is and how quickly it can mow down regular enemies — especially in the early floors. All weapons that use bullets or explosives have finite ammo, but thankfully you can pick up more from chests and some defeated enemies along the way. It doesn’t mean you can go crazy with your ammo, but you should try to conserve as much as you can for when you really need it. I rarely ever had to worry about running out of ammo. You also have hearts that represent your health, which can be healed by finding medkits in chests, from defeated enemies, or even bought from shops that appear on some floors.

The shops are very helpful, and trust me when I say I’ve spent a fair amount of my collected scrap in them throughout my multiple runs. Scrap is found in destroyed environmental objects and defeated enemies, so grab everything you can after you’ve laid waste to those in your way. I bought plenty of medkits, along with a lot of upgrades for the runs I was on. Upgrades can also be found in chests, just like most other things in the game. The upgrades come in the form of items that improve how you fight; for example, some increase attack speed, others increase damage done from behind an enemy, some have armed drones follow you as backup, some have saw blades attack nearby enemies, and much more. These items are always a treat to attach, so make sure you get as many as possible so you can dish out some major damage and make enemies regret messing with you. You can also find tools that you can use to perform special abilities such as calling in a temporary backup drone to fight by your side. Each character has their own unique one, which I’ll touch on in a bit. 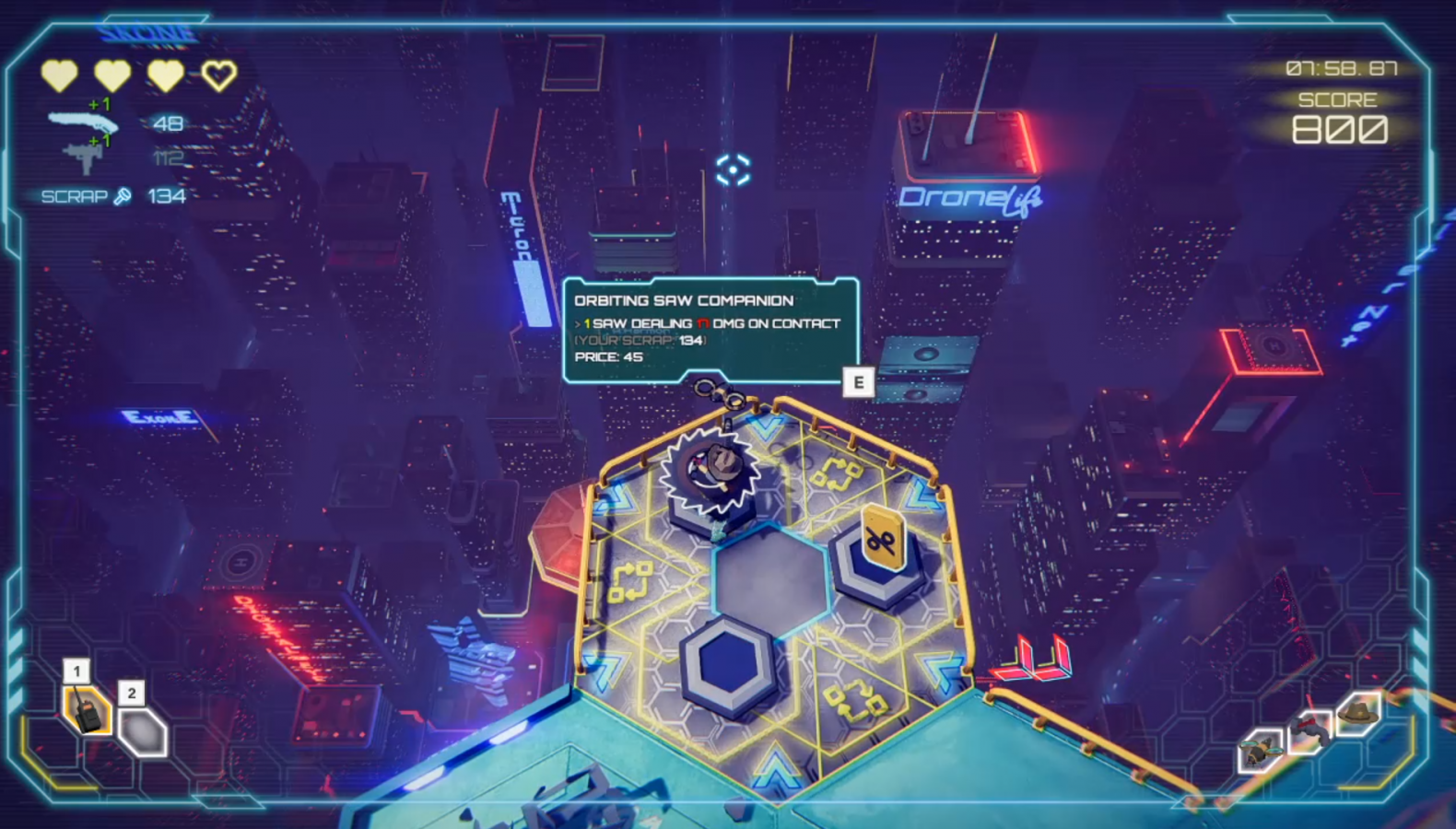 Going back to gameplay, I want to mention two things: the paths you can choose, and the characters. After completing each floor you usually have two different doors that you can exit through, with each one leading to a different area. The exits show you what kind of room you’ll be heading to, whether it be one with snipers, one with grenadiers, a special hacking room, etc., which I appreciate. It gives you the choice of what you want to take on, along with showing you the type of reward you’ll get on that floor. It won’t say the exact reward, but it at least tells you if you’ll find a weapon or an item.

As for characters, you start with the generic balanced soldier who is designed to help you get the hang of things. As you play more and accomplish certain tasks, you’ll earn points that unlock weapons and items that can appear throughout the floors you go through, along with unlocking characters down the line. I’ve only unlocked one, an android named Hunt3r, who has less health than the soldier, but is faster. The soldier has a unique tool called Bullet Rain that lets him call down a barrage of bullets within a small dome of his choice, while Hunt3r can temporarily go invisible and sneak around opponents to get some surprise hits in. Both of these are very useful, but which one helps more will greatly vary based on your preferred playstyle. Do you want to go for long range destruction? Or would you rather sneak up and inflict some pain up close? 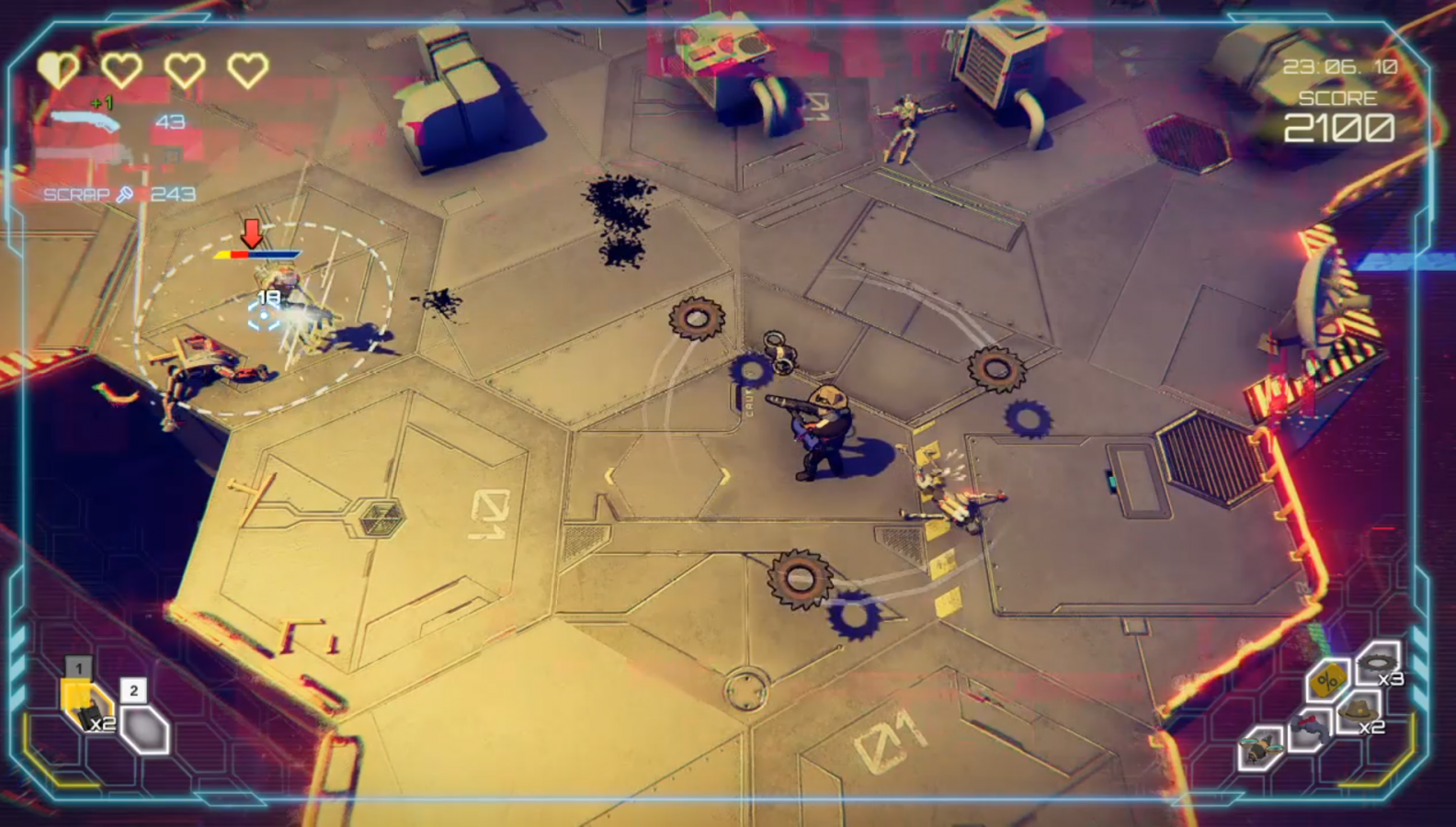 Overall, Danger Scavenger is definitely a challenging game. At first the enemies aren’t that tough, but as you progress, they’ll start to keep you on your toes. They may even start overwhelming you and forcing you to think more carefully about your actions so you don’t get yourself killed. I appreciate the challenge, but sometimes it gets a little rough. Even so, it’s still a lot of fun. The boss fights, mainly the one I’ve encountered, are the bigger issue here. The first boss you fight is a large robot that will unload on you with grenades, lasers, bullets, and even a seismic wave attack. You can avoid the first three attacks by avoiding the obvious projectile, but the seismic wave must be dodged or dashed through in order to avoid it. If you’re far enough away, that works too, but otherwise you’ll have to time that dodge. It’s not too bad, but combined with everything else that’s being fired at you it’s a tense fight for sure. Also, he has a ton of health, which means the fight takes a while. I had to fight by running and dodging in a counter-clockwise motion around him while shooting every chance I could. Thankfully he occasionally dropped health and ammo for me to keep going, but man was it stressful. Boss fights shouldn’t be easy, but considering this wasn’t even close to the final boss, I’d say he could turn down the intensity a bit. 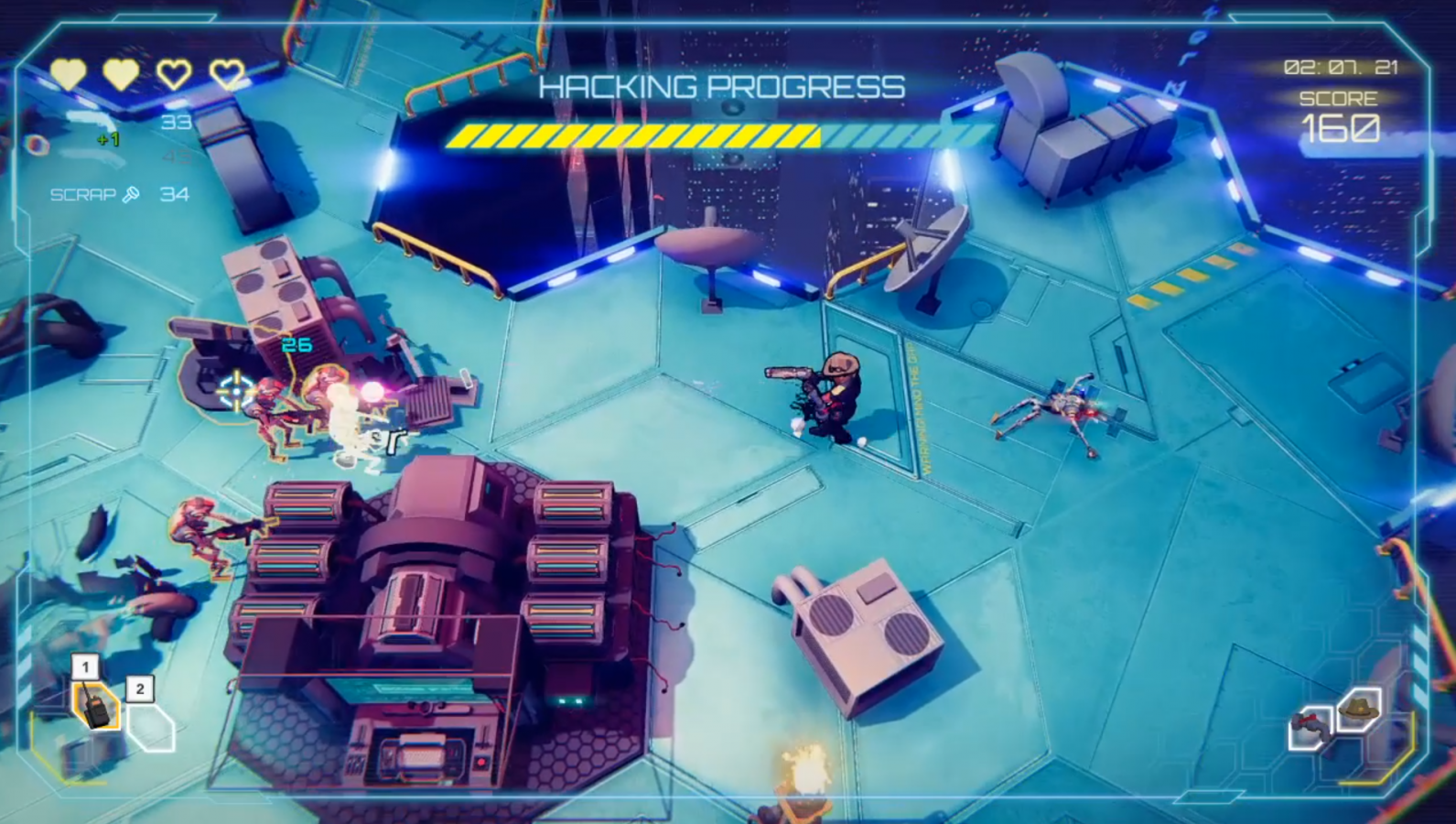 The cyberpunk theme of Danger Scavenger is neat, even if done a bit much. The art style and soundtrack match perfectly with the overall tone of the game, which makes the action that much better. The difficulty is fine, but some floors are a bit much, and the first boss takes a lot to take down. Even with the issues I have with Danger Scavenger, I’d still say that it’s a good game, especially for around $14, which is the price as of writing this review.

Danger Scavenger is a neat cyberpunk roguelike with some fun gunplay. Upgrading along the way feels great, especially when you become a powerhouse. The downside is that with how much you truly need to complete to finish a run, the roguelike aspect really hurts. You get punished more than you should, so be ready for plenty of hard fights and death.

Codi loves to play video games and watch movies. He will watch almost any kind of movie just to experience them. His ideas take inspiration from the shows and movies he watches, and games he plays. He also loves a good pun.
Related Articles: Danger Scavenger
Share
Tweet
Share
Submit