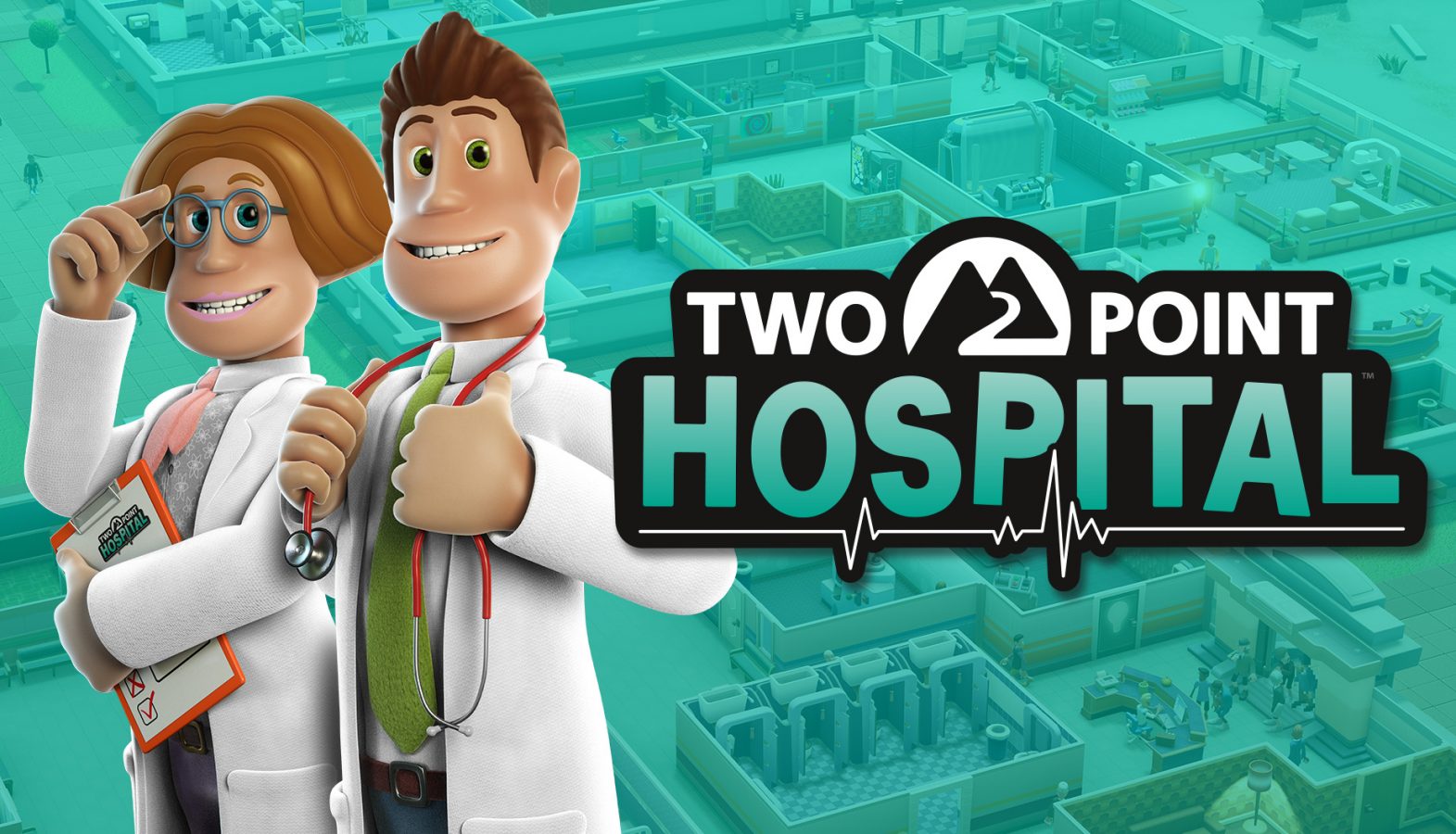 I have never played Theme Hospital — this game’s spiritual predecessor which was released in 1997. However, I adored Black & White when I was a kid, a god game franchise which was co-designed by some of the same folks who now work at Two Point Studios. The eponymous game revitalizes that childhood wonder I would feel when playing an old-school Lionhead title or a golden-age Sims game. Two Point Hospital is, then, truly one of the best simulations in ages — business sim or otherwise — transitioning to consoles as smooth as a steady operation. So get ready to treat some wacky illnesses and build a thriving medical organization! 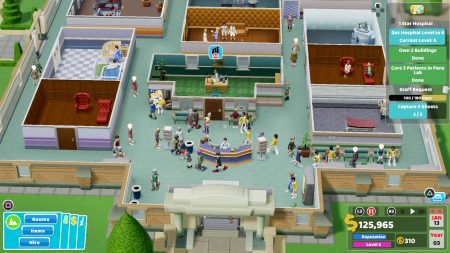 There are patients aplenty!

Two Point Hospital allows you to become a hospital ambassador. With this role, you manage a fully-fledged hospital business. The game is played from a top-down perspective and revolves around staff hiring and room building. There is no need to actually build a hospital — each of the fifteen levels offers a blank template for you to start a soon-to-be bustling health center. To advance onto a new building, a 1-star rating needs to be achieved by expanding your hospital with more resources. After the promotion, you can proceed or stay at your chosen hospital to further improve upon it and earn a 3-star rating. This progression system is addictive and always allows a fresh start with varied starting conditions and challenges.

Hiring and team management are astonishingly intuitive. A list of job applicants, which includes hilariously unqualified statements, can be reviewed,. An applicant’s skills and abilities are also available to inspect. Once employed, your newest member can be dragged and dropped anywhere to perform a series of tasks. When needed, staff will take matters into their own hands and steer toward more pressing issues. The result is a workforce that is autonomous and reliable — unlike many other simulations where you have to nervously watch over your team. For an extra personal touch, you can customize your personnel’s names and clothing. To top off a balanced employer-employee relationship, you can promote workers for higher pay and better performance. All-in-all, managing your team of nurses, janitors, and doctors is rarely a chore. 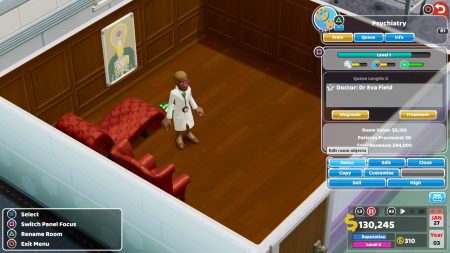 You can moderate your staff’s routines and actions with godlike authority.

Equally as easy is the building process. From a list of blueprints, you can easily construct a room. All you need to do is lay out the minimum dimensions (E.G., 4×4,) place a couple of necessary items, and that’s all. Expanding a room or adding more items increases its ‘Prestige’ level, which increases the happiness of both staff and patients as well as the value of your hospital. There are a wide selection of rooms that each have their own equipment which cures specific illnesses. The De-Lux Clinic, for example, treats those afflicted with ‘Light headedness,’ which is an illness that causes a person to have a lightbulb as a head. The O-Luxe machine yanks out the unwanted device and places the original patient’s head on the body. This is but one of many delightful examples of absurd illnesses and their equally weird methods of treatment.

What’s new and included in this console version? Well, the controls have been redone from the ground up for controllers. PC purists need not worry about the lack of mouse and keyboard support since this new scheme works near-perfectly. Moving stuff is seamless, and navigating menus is simple even when there are multiple panels to select from. There is also a new overview camera that presents a bird’s eye view, which is useful for gaining clarity on your stream of patients. For what is bundled with this port, you get two DLCs: Bigfoot and Pebberly Island. These add a total of six new levels in addition to the fifteen in the base game, as well as heaps of other stuff like rooms, illnesses, items, etc. This port is almost like a GOTY of sorts, and there is a lot more to come with a future free update that adds in a sandbox mode and more DLC. Just what the doctor ordered. 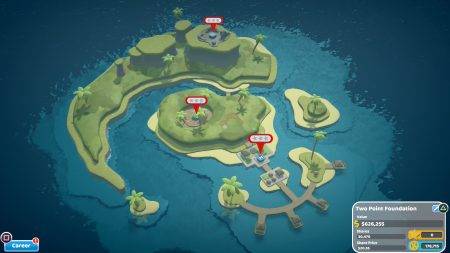 Two Point Hospital on console outstrips the expectations of being a PC-to-console port by transplanting the heart of its home platform and then some. Fatigue and frustration can sometimes be felt when a hospital becomes hectic, and you want to delve into the overwhelming amount of micro-management options. However, with delightful humor and approachable mechanics, one of 2018’s best games will still make the stay at your hospital(s) extremely enjoyable.

With an abundance of accessibility and irresistible charm, this version of Two Point Hospital is a shining example of a console port done right. The incredible control scheme will make you forget that the PC version even existed! With its clean bill of health, this is the best business sim game you will find on consoles.

Lorenzo is a 22 year-old Londoner and lounger. The mysticism of games criticism is his shield from any career that involves manual labor. Moreover, he wants to bring unique critical approaches to the realm of the Eighth Art. His favorite games include Red Dead Redemption and its sequel, Shadow of the Colossus, and The Last of Us.
Related Articles: Two Point Hospital
Share
Tweet
Share
Submit