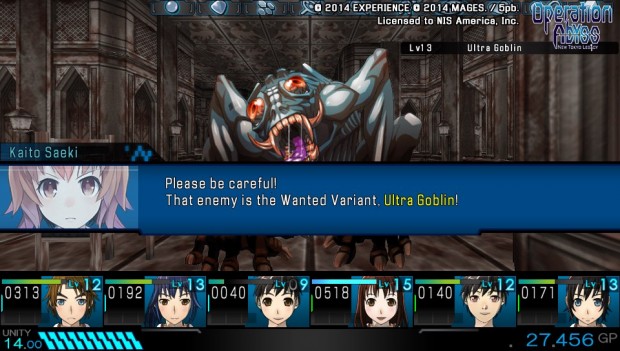 At one time to get a full RPG experience you needed to be sitting in front of a TV with a console in front of you. As technology moved forward and systems got smaller, some classic RPGs made their way to portable systems. While these portable devices have become more powerful, their adventures have become more robust as well. The RPG genre has made a bit of a renaissance on the 3DS and Vita. Experience Inc, the company behind the Vita RPG Demon Gaze, has now come out with another RPG, Operation Abyss: New Tokyo Legacy.

When first starting out Operation Abyss, I noticed the city was a bright futuristic land that could put most ‘80’s neon lighting to shame. The characters you encounter have on bright outfits and illustrated with a level of detail that you’d find in several anime series. However, most of the interaction is with stills of the characters, and the initial interactions can become very long for the amount of exposition to the plot they actually give.

The members of your team are partially determined if you choose the Basic mode, which comes with a party of pre-determined characters, and the Classic mode which allows you to customize your entire party of six. I often just like to go with the characters created by the system, but it’s nice to know that you can try to improve the party yourself by giving them tweaks suited to your play style.

If you are looking for a story other than the typical, “you wake up with no memory, meet a stranger who tells you to follow him, and later explains that you need to fight with them to save the world,” then you’ll be disappointed. Then again, the giant attacking crocodile being demolished in front of you in one critical blow isn’t your standard fare. You’ll find out that you are a part of the Code Physics Agency in charge of taking care of Variants, the monsters that populate the dungeons you’ll be forced to wander through.

If you thought that the entire world would be full of Hello Kitty pink and “Happy Happy Joy Joy” explosions of wonderful happiness, then the tone in the dungeons will shock you. The dungeons themselves are dark, and the textures on them won’t win any graphical achievement awards unless there’s one for most retro Wolfenstein 3D look. However, this is a remake of a game from 2008 that never made its way to the states. The Variants contrast this with their hand-drawn look and a darker color palate. The forms used are representative of the Shin Megami Tensei series, having a creep factor that could cause nightmares in young children and sensitive adults.

Movement in the dungeons is similar to the old Might and Magic games. Everything is on a 90-degree angle, so maps could have been designed on graph paper. If you didn’t mind travelling this way while playing M&M or the Eye of the Beholder series, then this won’t be as jarring to you as people who are expecting an Elder Scrolls experience.

The combat system feels like the Wizardry games. Your party consists of six members, with the three in front typically having strong physical attacks, while the back row consists of those with talents in magical powers. When you choose to attack, you attack a group of enemies. While this speeds up the pace of going through the dungeon, it can be infuriating when you want to hit character A in the group you attack, but B or C get hit instead, leaving a fuller compliment of enemies to attack you. If you are used to being able to control all of your tactical moves, you might get frustrated.

Persona 3 had a mechanic where the party got tired the further it went into the dungeon. Operation Abyss uses a similar system, but instead of making the party tired, the enemies get stronger the further the party delves down. However, you can make a large amount of bank and EXP when the Variant levels jump higher, so a risk-reward factor needs to be factored into every move. This might not be so bad if you gained levels while inside the dungeons, but you are forced to go back to the headquarters and level up in the Medical Center and resting. This can slow down the pace of the game since you will do a lot of backtracking. While at headquarters you can reassign the team’s equipment, and even try to forge new weapons. Getting the knack of customization will take some time though, as you’ll encounter enemies with different strengths and weaknesses that need to be accounted for.

The design of the dungeons is quite confusing, even with the AutoMap. Some of these dungeons end up becoming combobulated into each other because there isn’t much to differentiate them. The same monsters combat you repeatedly, making it feel like you are grinding instead of exploring new areas.

It’s been a while since I played a sci-fi RPG like this, and it reminded me of Shin Megami Tensei: Strange Journey. I appreciated the colorful characters and unique enemies, but the level design leaves something to be desired. Worse options could be chosen these days, and while it’s not for everyone, fans of the genre looking for something new on their Vita should check it out.

While not working as a Database Administrator, Keith Schleicher has been associated with Gaming Trend since 2003. While his love of video games started with the Telestar Alpha (a pong console with four different games), he trule started playing video games when he received the ill-fated TI-99/4A. While the Speech Synthesizer seemed to be the height of gaming, eventually a 286 AT computer running at 8/12 Hz and a CGA monitor would be his outlet for a while. Eventually he’d graduate to 386, 486, Pentium, and Athlon systems, building some of those systems while doing some hardware reviews and attending Comdex. With the release of the Dreamcast that started his conversion to the console world. Since then he has acquired an NES, SNES, PS2, PS3, PSP, GBA-SP, DS, Xbox, Xbox 360, Xbox One S, Gamecube, Wii, Switch, and Oculus Quest 2. While not playing video games he enjoys bowling, reading, playing board games, listening to music, and watching movies and TV. He originally hails from Wisconsin but is now living in Michigan with his wife and sons.
Related Articles: Operation Abyss: New Tokyo Legacy
Share
Tweet
Share
Submit