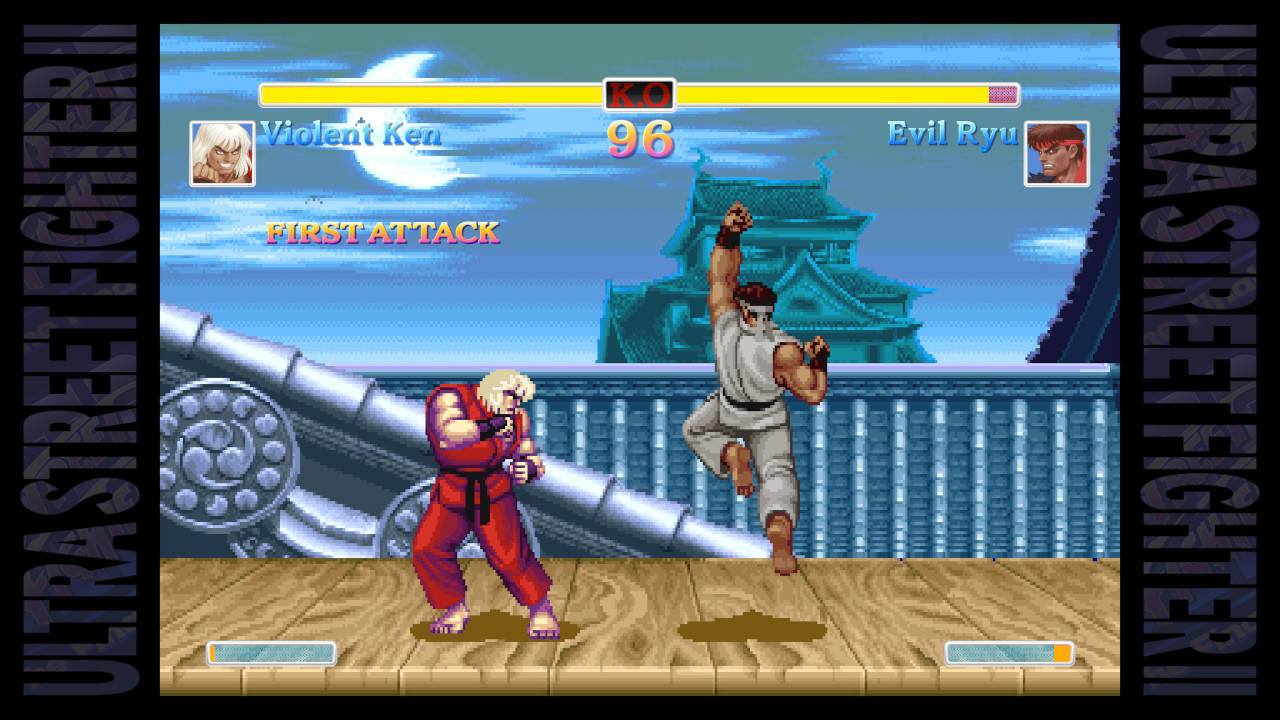 At first glance, Ultra Street Fighter II: The Final Challengers feels just like Street Fighter II, but there are noticeable graphical and balance changes. The visuals have been overhauled to a more modern look while keeping the hitboxes and frames the same. You can choose between both classic and updated style and receive the same gameplay. For balance changes, characters like Balrog no longer have the overwhelming pummel they had in previous entries and are now on a more equal playing ground. Furthermore, two new fighters have been added to the roster: Street Fighter Alpha 2’s Evil Ryu and SNK vs Capcom: SVC Chaos’ Violent Ken. Akuma is also available from the character select menu as opposed to the work-around you needed to play as him in Super Street Fighter Turbo HD Remix, the previous release of Street Fighter II.

Evil Ryu plays similarly to his Street Fighter Alpha 2 incarnation. He has the accessible simplicity of Ryu while using the power of Akuma; if anything, Evil Ryu is a nice step between the two characters. On the other hand, Violent Ken feels like a faster, and at times, more satisfying Ken. His moveset is similar to Ken’s, but he now has the ability to quickly dash closer to, or even past, his opponent. This allows you to avoid range attacks, close distance more quickly and punish your foe. While both Evil Ryu and Violent Ken’s sprites in the classic style are just pallet swaps, the new style changes more than just their colors.

Unlike Super Street Fighter Turbo HD Remix, the balancing changed something that has been a main component of Street Fighter II from the beginning: randomness. Prior to Ultra, damage and dizziness would be randomized between a set of variables. However, each hit now has a set damage value, decreasing randomness in the game and allowing the player to make more calculated decisions as they fight, which could potentially throw off some seasoned veterans. Removing the randomness allowed my friend, who played as Violent Ken, to do a heavy Dragon Punch in front of me to knock me into stun almost instantly several times.

The standard single-player arcade mode is still intact, leading you to fight several foes in a row and view your character’s ending, but there is also an added two player cooperative arcade mode. This “Buddy Battle” has you and a friend working together to pummel a single fighter. While this mode is a cool, quick distraction, having two players fight a single player makes it too easy to juggle an opponent and finish him off quickly. To make things worse, this mode only has four stages, no stage overview, and no fanfare for completing it. It, and the other included mode, feels shoehorned in comparison to arcade mode.

The other added mode is “Way of the Hado,” a first-person minigame where you take out hordes of foes as Ryu while using his moveset. Using motion controls akin to the Wii era, you blast enemies with a hadoken, kick them away with a tatsumaki senpuukyaku (hurricane kick) or send them to the stars with a shoryuken. Getting these motion controls to work, however, is a frustrating task. There is a training mode to teach you how to do the moves, but they’re overly complicated in execution. When you actually get them to work, which is easily the hardest part, the game itself is insultingly short and extremely repetitive. Doing a “hadoken” stance with your hands is fun in theory, but when you’re repeatedly thrusting your hands towards the screen, the fun is harder to find than “The Way.” There are three stages, with the difficulty only varying slightly between them. Overall, this mode is a nearly broken distraction that detracts from an otherwise decent game.
Ultra Street Fighter II: The Final Challengers’ biggest sin, however, is not the added modes, but the features missing that were available in previous versions. In Super Turbo HD, the training mode included a hitbox option to see which parts of you are vulnerable during an attack and which parts of you pack the punch. This is incredibly useful for any fighting game aficionado looking to expand their skills and understand how their fighters of choice works.

I wish I could say that Ultra Street Fighter II: The Final Challengers is the ultimate version of Street Fighter II, but it isn’t. The lack of speed options and a nerfed training mode stops it from being the great version it could be. The game is still, at its core, Street Fighter II, making it a solid fighting game, but its price is far too steep for what is offered.

Ultra Street Fighter II: The Final Challengers is a fun fighting game with interesting new mechanics and touted as the definitive version of Street Fighter II, but it comes off as lazy and overpriced, padded with a lackluster buddy mode and an unnecessary and almost broken “Way of the Hado” mode reminiscent of the worst of the Wii era.

Sean Anthony likes to combine two of his passions: gaming and writing. Gaming has been a huge part of his life ever since he played his first game as a child, Kirby's Adventure. He aspires to have his name attached to an article that makes the whole world go, "Huh, that's neat, I guess."
Related Articles: Ultra Street Fighter II: The Final Challengers
Share
Tweet
Share
Submit