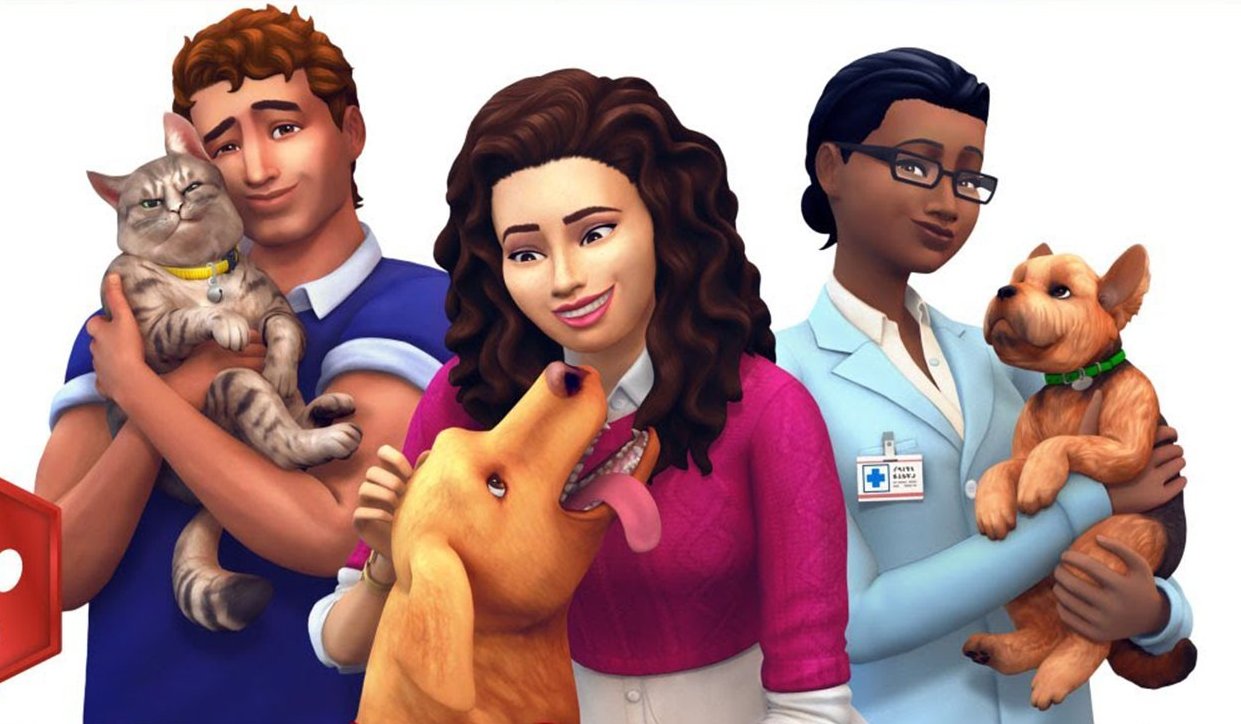 The Sims 4 has many trademarks and expansions which people look forward to, but none of them compares to the pets expansions. Possibly the most sought after expansion, Cats & Dogs is finally coming to The Sims 4, and brings with it all the fun of your favorite furry friends. With a huge selection of breeds, amazing customization tools, and a new vet profession, this expansion is packed with content, and may be the best expansion The Sims 4 has ever seen.

One of the aspects I was both most excited and most scared of was the pet creation. I had high hopes it would allow me to create great pets, and surprisingly, it met my expectations. The create a pet tool is not only as in depth as creating a Sim, it is actually even more robust. One\ top of picking a breed and customizing from there, you can create your own mix, and with tons of ear, tail, fur, faces, and color patterns, I was able to make my perfect companion. This goes for both dogs and cats. My personal favorite new addition is the ability to paint a pet, allowing me to get any markings I wanted, or make a crazy pet with wild, unrealistic patterns. I was blown away by the whole system, and was amazed by both how easy and in-depth it can be. For the first time there is even costumes to dress your pet in! The only thing I wish they had was more options for dog and cat sizes, at this time, dogs either come in small or large. I wish the actual sizing of the breeds was more varying, or have a slider for pet height.

The next step in creating your pet is to pick create personality by picking traits. There are a lot to choose from including hairy, playful, aggressive, lazy, and so many more. By picking three of these traits you can really create and fine tune the personality of your pet, and how you want them to behave. This trait system is great and really has an effect on gameplay; I created and played with multiple pets, and they all acted different and had distinct personalities. This really brings your cats and dogs to life and makes them feel as though they are unique. One thing that some may be disappointed with is the fact you cannot directly play as or control your pets. I personally prefer this and with the great trait system could make them behave how I wanted, but at the same time watching them interact and play with the world, made them feel more like real pets and not another character.

Although the new Vet career has great potential, it ultimately falls flat. I was excited when I learned that you could not only become a vet, but run a veterinary clinic in Cats & Dogs, but it failed to live up to my standards. Running a clinic is much like running any other business in The Sims 4, with some exceptions to the day to day routine. You can employ veterinarians, choose how much of a markup to charge, and even decide to get premium or black market meds. Actually running it feels like the businesses that you could run before it, which is not a bad thing, but it lacks feeling unique. You can still train, praise, or punish your employees, and your business is rated by the customers. It is a fun experience, especially if you’ve never had a business before, but actually playing a vet, and not just running the clinic, is where it becomes less fun.

Starting out, my first few in game days of being a vet was great. You greet the pet owner, examine the pet, than give it medicine or take it to surgery. It is a great little system that allows you to specifically check areas of the cat or dog and will tell you on screen if something’s not right. After you find everything that is wrong with the pet, usually three or four symptoms to find, you go through the menu to determine your next move. After checking the medicine available, if any are compatible (which it shows you in green if they will work) you can decide to give the medicine or if the animal needs surgery. Surgery is simply putting the critter in a machine and selecting what procedure to do, than it’s over. This whole process becomes extremely repetitive and lackluster the longer you do it, and before you know it, working as a vet has become a major chore.

Although the veterinary job has a lot to be desired, Cats & Dogs has a ton of new items to play with, which more than makes up for it. In possibly one of the heaviest, content rich expansions, I was pleased to find new items in build mode in almost every category. There was everything from dog beds, food bowls, new furniture and wall decals, and even a roomba like vacuum (and yes cats will ride it around the house). After pouring many hours into the game, I am still finding new items to play with or add to my house. In all honesty I wish all expansions had this much quality items to choose from. The furniture and new items look great, and most have a useful function that your pets can interact with. This great selection crosses into the Create-A-Sim portion as well with new hairstyles, clothes, and accessories. The amount of new content here is very welcomed and appreciated.

The new addition of pets to the Sims is nothing new, but in The Sims 4 I appreciated my furry pals more than ever. Pets make a great addition to your family. They add a ton of new things to do such as training, playing, and hanging out with them. As previously stated, you cannot directly control them, but that also gives them charm. Having my Bernese Mountain Dog randomly get scared and needed to be calmed down, or training him to not bark flowed organically and did not feel forced. Cats will get on any furniture they can, and will even knock stuff off of it, like a real cat. Pets are fun and unexpected in their behavior, and owning them added greatly to my Sims experience. Being able to bathe, play with laser pointers, take pictures of them, and even pretend to throw a ball to confuse your dog are all small examples of new ways to play The Sims. The pets have varied and great personalities and no two pets have felt the same. I have greatly enjoyed the dogs and cats, and although they do not fundamentally change how you play, they add a new layer to the game which was greatly needed.

The Sims 4 Cats & Dogs was the expansion I was most looking forward to, and it did not let me down. With the robust creation tool, the numerous new items, and great ways to play and interact with your pets allows you to make new memories and adds a new layer of depth to the game. With the exception of the veterinary job, this expansion is full of items and great new gameplay potentials, and in my opinion is one of the greatest expansions for The Sims 4.

Growing up in a small Colorado town, Bryan has always had plenty of time to play games. PC is his first choice of tech followed by the PS4. Graduating at 16 Bryan knew he wanted to be a writer and wanted to combine his love of games into that and found Gaming Trend in 2012 where he quickly became a member and started writing for them as soon as he could. He is still at Gaming Trend, but now has 2 kids, a puppy, and a lot less time to play the games he loves, but he always finds a way to get back into gaming.
Related Articles: The Sims 4 Cats & Dogs
Share
Tweet
Share
Submit