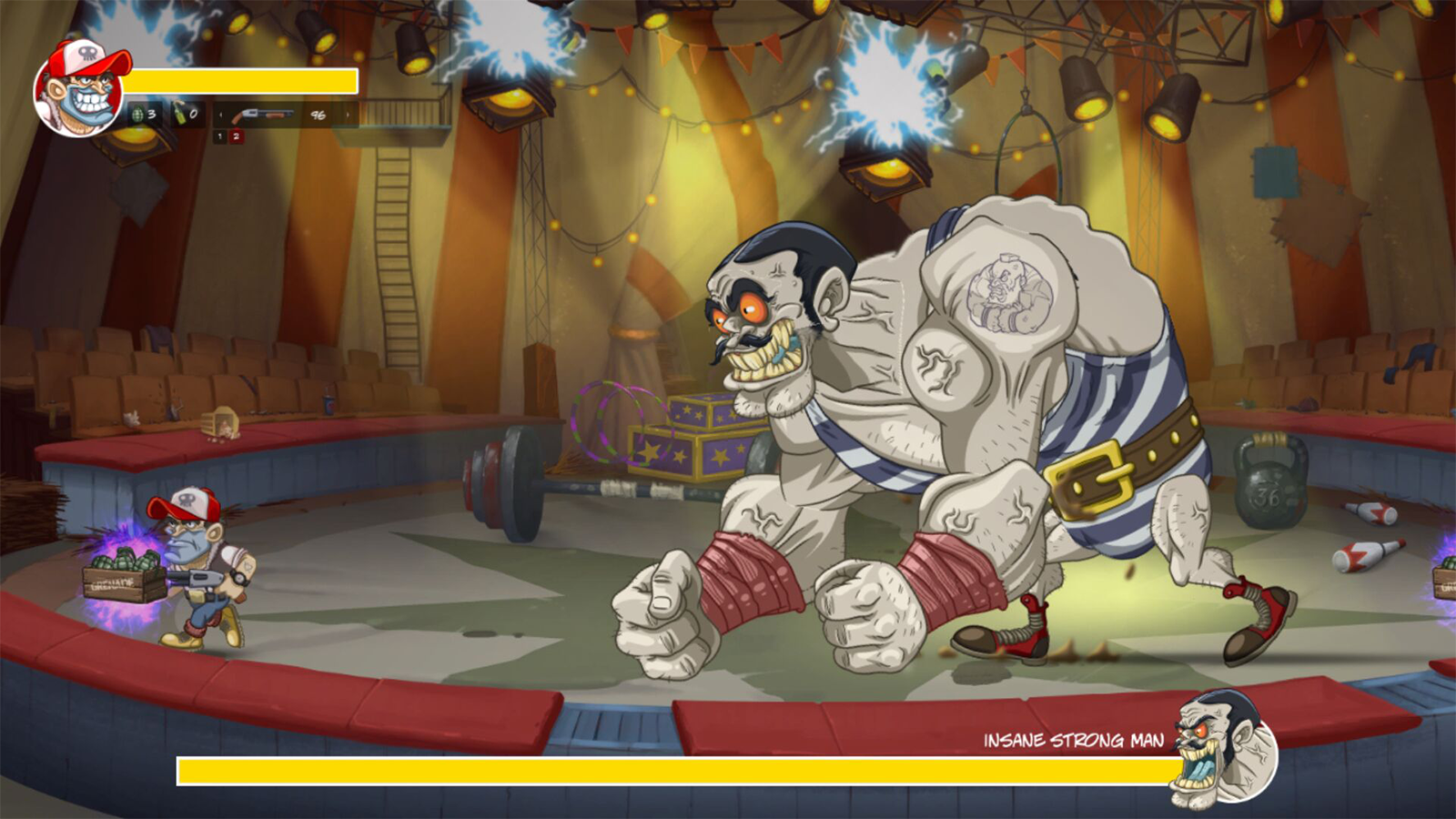 Groovy Milk makes its indie debut with Creepy Road—a 2D run-and-gun roller coaster bursting at the seams with charm and energy. Players assume the role of Flint Trucker, an oddball truck driver (unsurprisingly) forced to take up arms against an unknown evil in order to save the love of his life. You’ll be gunning down hordes of psycho bears, killer clowns, magic hats, balloon pandas, and more as you venture deeper and deeper into enemy territory.

Creepy Road’s hand-drawn, hyper-stylized art can’t be described as anything other than a visual feast. It’s colorful, weird, and never lets up for even a single moment. The enemy voice lines, however, could take a break every now and then. Enemies and bosses repeat the same quirky line over and over to the point of annoyance. I chose to drown them out with a ceaseless symphony of the much more audibly pleasing gunfire.

If it wasn’t already apparent, the game doesn’t take itself very seriously. The story is as absurd as it is cliché. The characters are fun, bizarre entities, which would be fine had it not been for some unbearable dialogue that is chock-full of cringe-worthy attempts at humor. The writing itself is plagued with errors, but it’s forgivable given that the developers themselves don’t speak English.

Game design is a universal language and all can be forgiven if the gameplay is solid. One of the key elements of a run-and-gun is the choice of weapons. Creepy Road has all the shooter standards like pistols and shotguns, and throws a few oddities into the mix like the Hypnoshit Gun. My personal theory is that, on contact with the rays emitted by this wonder weapon, enemies will be convinced that their true form is a pile of feces and will immediately transform into just that. This perfectly encapsulates the crazy experience that is this game.

Unfortunately, the prospect of such a vast array of weapons leads to some tricky scenarios. You start off with the pistol, picking up weapons as you go. Like many run-and-guns, each weapon you pick up has limited ammo. Unlike many run-and-guns, you can keep as many weapons as your heart desires. The issue: each level has its own set of available weapons and this can cause the corresponding hotkeys to change. Number key “2” is your shotgun, but then you find a rocket launcher and suddenly, the launcher is on “2” and the shotgun has been moved to “3.” Next level, the launcher is on “5.” It’s very confusing.

It’s especially inconvenient given that the game revolves around weapon management, rather than dodging projectiles and positioning. If powerful enemies appear, you need to pull out a strong weapon to deal with them. Avoiding enemy attacks, in many cases, is not a valid option. Many enemies have projectiles that are either hitscan (instant hit), or too fast to consistently evade. This seems to be the game’s core gameplay philosophy, but the way you select weapons is far too awkward to capitalize on that. You don’t really have time to fumble with your hotkeys and find the right weapon during the heat of battle.

The myriad of weirdos you get to encounter over your 3-4 hour adventure is impressive to say the least. While enemies are often reused, the game constantly and consistently introduces more enemies for you to mow down. Enemy splash damage is clearly in favor of the enemy, with absurd range that extends quite a bit beyond the visual tell. Enemy hitboxes are too small at times, and given the layout of the levels, they become hard to hit. If an enemy is directly in front of you, your shots go right through them while they get free swings on you.

Early into my playthrough, I discovered that when you trigger enemies to spawn, they’ll wait for you off-screen. This means that players can simply fire into the distance and remove a lot of the game’s challenge. I was also able to effectively cheese the first two bosses to death by taking advantage of their simple AI.

The other half of the run-and-gun formula is, well, running/moving through the level. In this game, the platforming takes the crown for the most irritating aspect of the entire game. The placement of the platforms is absolutely horrendous. There are obstacles that you’ll hit your head on, ruining your jumps. There are platforms that are so high up, that it takes several tries to even make the jump. Even then, Flint gets stuck in the platforms for a second or two before magically appearing on it.

To make matters worse, the hit boxes on the platforms are unpredictable. Sometimes, the hitbox will extend past the platform, other times, it doesn’t. While close to edges, Flint also has a tendency to slowly slip off the platform which is terrible for when you’re trying to make longer jumps. Combined with clunky jumping and physics overall, traversing the later levels becomes a nightmare.

Once you make it past a level, you may be rewarded with a boss fight. Aside from the final two, I found the bosses in this game to be severely underwhelming. While they are indeed challenging, their move set is limited to an average of two or three attacks. However, the timing required to successfully dodge their attacks (especially the third boss) makes certain bosses incredibly difficult, but not any more fun.

The game sticks to this same format for the majority of the game with only one real deviation: the token flying bit. It’s a surprisingly long, but an unsurprisingly dull level that restricts you to just one weapon as you ride a missile to your next destination. There are no checkpoints present in the level, so focus is key if you want to avoid starting over. The game tries to spice things up by alternating between a handful of obstacles and enemies, but it doesn’t get any more interesting. The screen also scrolls at a snail’s pace, which only extends the monotony.

I appreciate the effort that went into creating this fun little run-and-gun experience. Through the enemy designs and the overall presentation, I can see that there’s a lot of heart and soul put into this game. For me, however, it’s in all the wrong places. The levels grow stale, the design choices for the enemies and weapons are questionable, and the game overall could have benefited from additional playtesting. The game is definitely a challenge, and I applaud it for that, but everything becomes too monotonous too quickly.

There are a decent amount of weapons, enemy types, and environments, but those are cold comforts in the face of frustrating issues like awkward weapon management, unpolished platforming, wonky enemy AI, and tedious combat encounters. A good first attempt, but the game suffers from poor design all around.

A self-deprecating, overly sarcastic pair of glasses that occasionally possesses a human host in order to partake in the delightful process of playing video games, then immediately complaining about them. When he is not playing games (a rare occurrence), he can be found either writing about things that no one cares about, or haunting the quiet streets of his Canadian suburb.
Related Articles: Creepy Road, Indies
Share
Tweet
Share
Submit