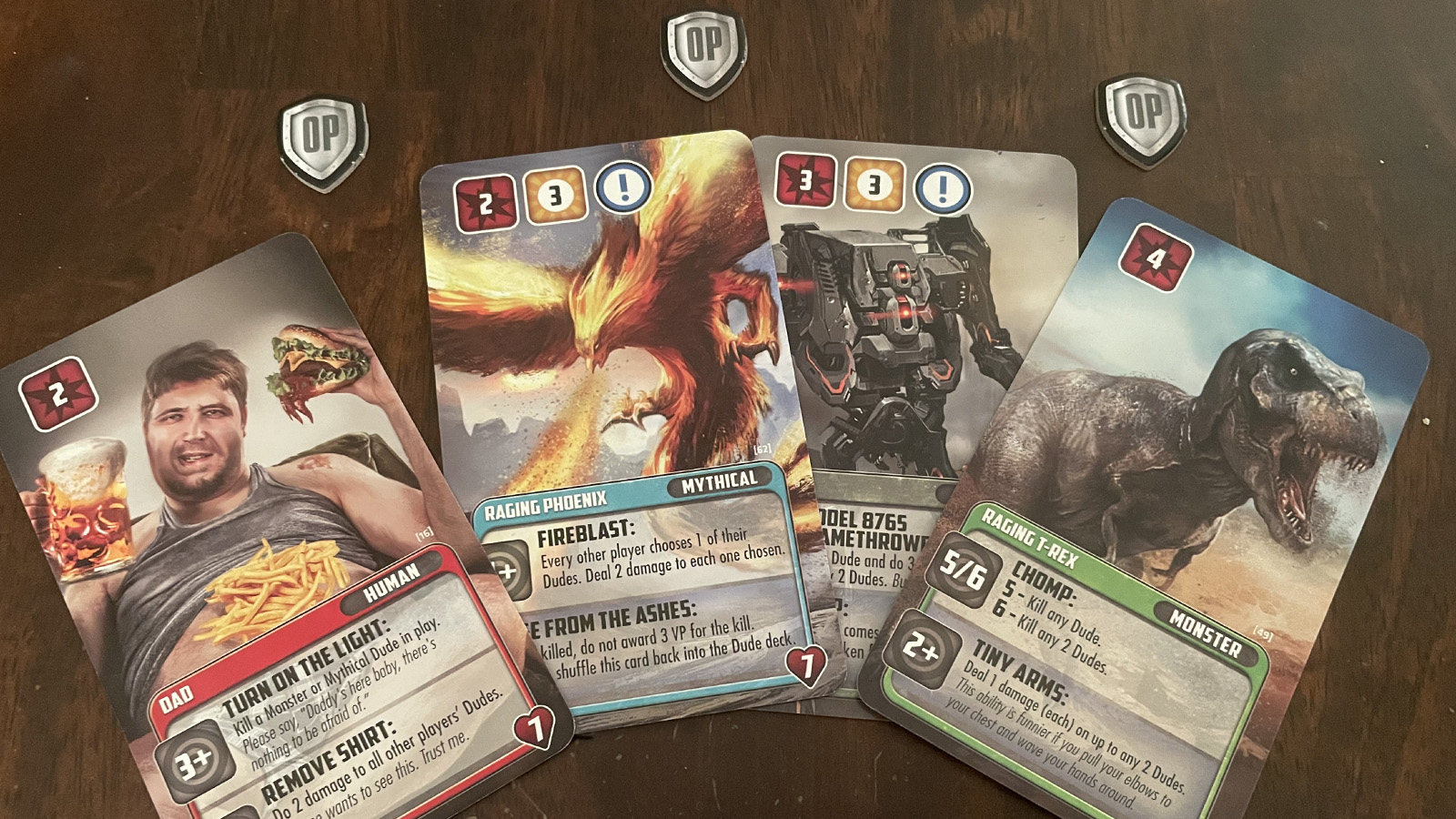 Did you ever play with a bunch of random toys as a kid and create an epic battle that didn’t really make sense? Like, robots and dinosaurs against ninjas and vampires? If you did, or have ever dreamed about the ultimate battle royale, then O.P. Arena is the game for you. It’s a game of insane silliness that doesn’t take itself too seriously and knows exactly what it is.
O.P. Arena is a take that game where players will create teams of Dudes; yes, Dudes are what they are called, even the T-Rex. These Dudes will battle against each other to try to destroy the other player’s Dudes and earn victory points. You can generate victory points by dealing damage to the enemy and for dealing the killing blow. There are also some other ways of getting points, but the first player to get to 30 points wins. This might seem simple enough and the gameplay itself is, but this game helps elevate a take-that game to the next level. Did you fall in love with that cute puppy on your team? Well, he was just eaten by a shark and is now gone. This is just a taste of what’s coming.

Setup is very simple as the game is primarily composed of cards and tokens. All the Dude cards are shuffled to create a deck full of Dudes (that is a phrase I didn’t think I’d ever say). Each player will then select their color and receive damage markers and a six-sided die. These damage markers will be used to track the damage you deal to other player’s Dudes. Each person will place their scoring token on the scoreboard and you are almost ready to start.
Create a pile of the Nerph and Shield Tokens and give each player one of each. These will be used to protect your Dudes or debuff other Dudes. Each player will also get 3 reroll cubes which will let you, as the name explains, reroll your die once per cube. Each player will get 3 Dudes. The first 3 players will place either 1 or 2 of these Dude cards in front of them to fight for them, and any other players can choose to place 0-2 Dude cards down. There are many when placed abilities and these don’t trigger on this initial setup so this might be a reason to hold on to cards in your hand.

One important rule! You’re not allowed to look at other player’s Dudes to see what kind of powers they have, and you can’t ask about their abilities. You can only ask the name, type, and special ability names. This means you’ll have to wait to witness these powers as a victim or spectator before seeing what they can do.

Every player’s turn is divided into six different phases. The first phase allows you to discard a dude that you have in play. You can have a maximum of 2 Dudes in play so if you have a really good Dude you’d like to play you can discard another to free up space. Any damage on this card will give the corresponding players 1 victory point per damage token. The second phase is a Call for Dudes. In this phase you have to literally Call for Dudes as you say that phrase out loud and any player with fewer than 2 Dudes in play can play a Dude starting to the left of the current player. 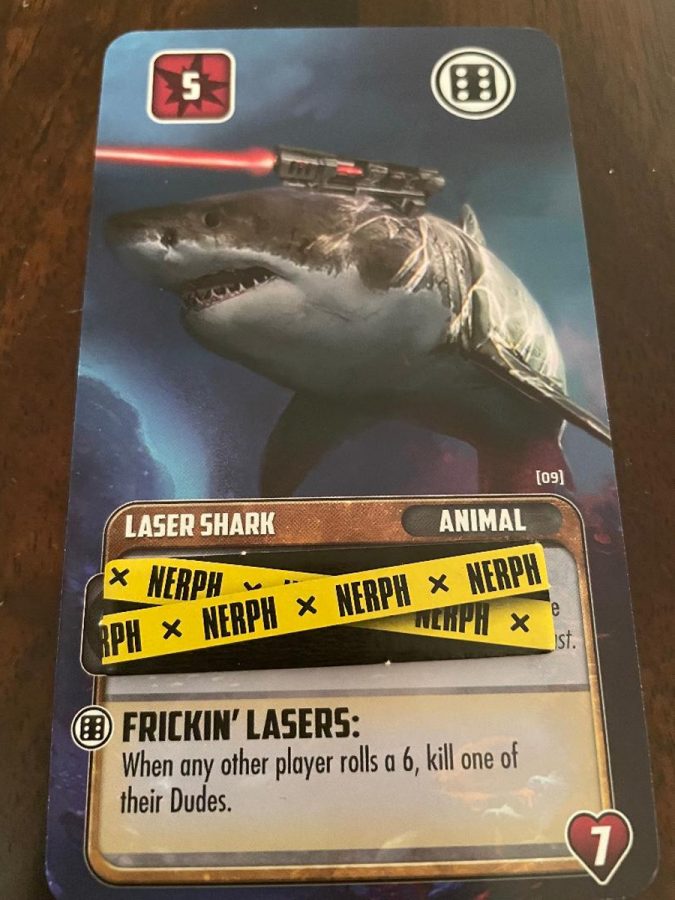 Phase 3 allows you to play 1 of either a Shield or Nerph token. Nerph tokens are used to cover an ability from a Dude which makes it no longer active. Shield tokens will block the First Nerph token that is played against a Dude. You can only have 1 Shield per Dude so players can team up against someone to Nerph something if they agree it is too powerful. The fourth phase is when you roll your power die which matches your player color. This is also where you can spend one of your 3 reroll cubes to reroll a die. The numbers on each face of these die rolls will be used for phase 5 where you will place your rolled power die. 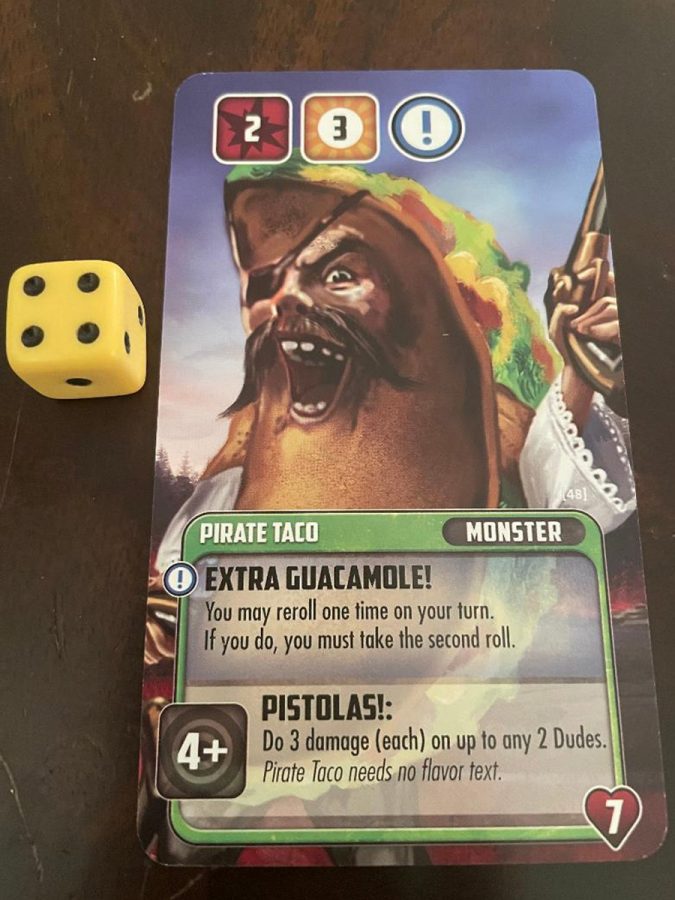 Every Dude has multiple active abilities. Some of them require an exact die number and some require a specific range. Based on your roll you can decide which section of the card you want to activate. The first place you can place a die is on the basic attack which is designated by a red burst. This requires the die roll to be greater than or equal to the basic attack location. When activated, you will deal that basic damage to a Dude. The second place you can assign a die is to the skill power, which allows you to gain tokens equal to the skill requirement as long as you meet that roll. Skills are designated by a yellow space on the card. Finally, there are gray special ability locations where you can truly unleash the power of your Dude. If you can’t activate any of your abilities because you didn’t roll high enough you can take 1 token from the supply. However, if you rolled a 1 and can’t activate anything then you had an Epic Fail and receive 2 tokens as well as being insulted and ridiculed for your bad rolls.

There are also some reactive effects which can occur when you roll a certain die face. These reactive effects can vary but after everyone has finished rolling these results will activate clockwise starting with the current player. If the Dude dies before it gets to him these reactive effects do not go off. Finally, the last phase is cleanup. Players can discard up to 2 Dudes from their hand and draw up to 3 cards. If you already have 3 or more cards, you are not allowed to draw any cards, however there may be Dudes which allow you to draw cards and there is no hand limit. Play will continue like this until someone has scored 30 or more points.

When I first looked at the box of this game, I knew it was going to be a fun one. You have a T-Rex against a shark with freaking laser beams, and a Viking with the grim reaper in a headlock. Once I opened the box and started playing, I realized my expectations had been too low. The amount of ridiculousness in the box was astounding, but in a good way. There were some things I would have never expected like a Pirate Taco, but this made each proceeding round even more fun.

The spirit of this game is to not look at all the different cards but to just start playing, and that’s exactly what I did. I didn’t know all the combos or even what to expect and as people would announce the Dude, they were placing down, the table was filled with laughs. These laughs then turned into rage as their beloved Dudes would then be attacked and destroyed. Somehow an ability seemed way overpowered, and that’s exactly what it was, which is why it’s the O.P. Arena. However, as soon as someone died to an overpowered ability they would retaliate with one that was just as overpowered. This back-and-forth see-saw of take that was both tense and fun. While you were mad about losing your Dude, you usually had someone lined up that could do something just as cool, if not cooler.

The game time flew by as we were all enjoying ourselves, and while it became more tense the closer someone got to 30 it didn’t slow the game down. That one rule about not reading other players’ cards really did help keep the game moving as we didn’t have to stop every time a new card came out. I really enjoyed how lighthearted it was and it didn’t outstay its welcome. If anything, we wanted to play another game as soon as it finished just so we could see some more of the ludicrous combos which existed. The speed of the setup was also another positive as creating a pile of tokens and shuffling only took a few minutes. This is a game that you could easily set up and begin playing within 5 minutes if everyone knew the rules and probably under 10 with a rules explanation as the rules really make sense as you go. The barrier to entry is low, as after 1 full round you will understand what is going on and quickly begin fighting back. 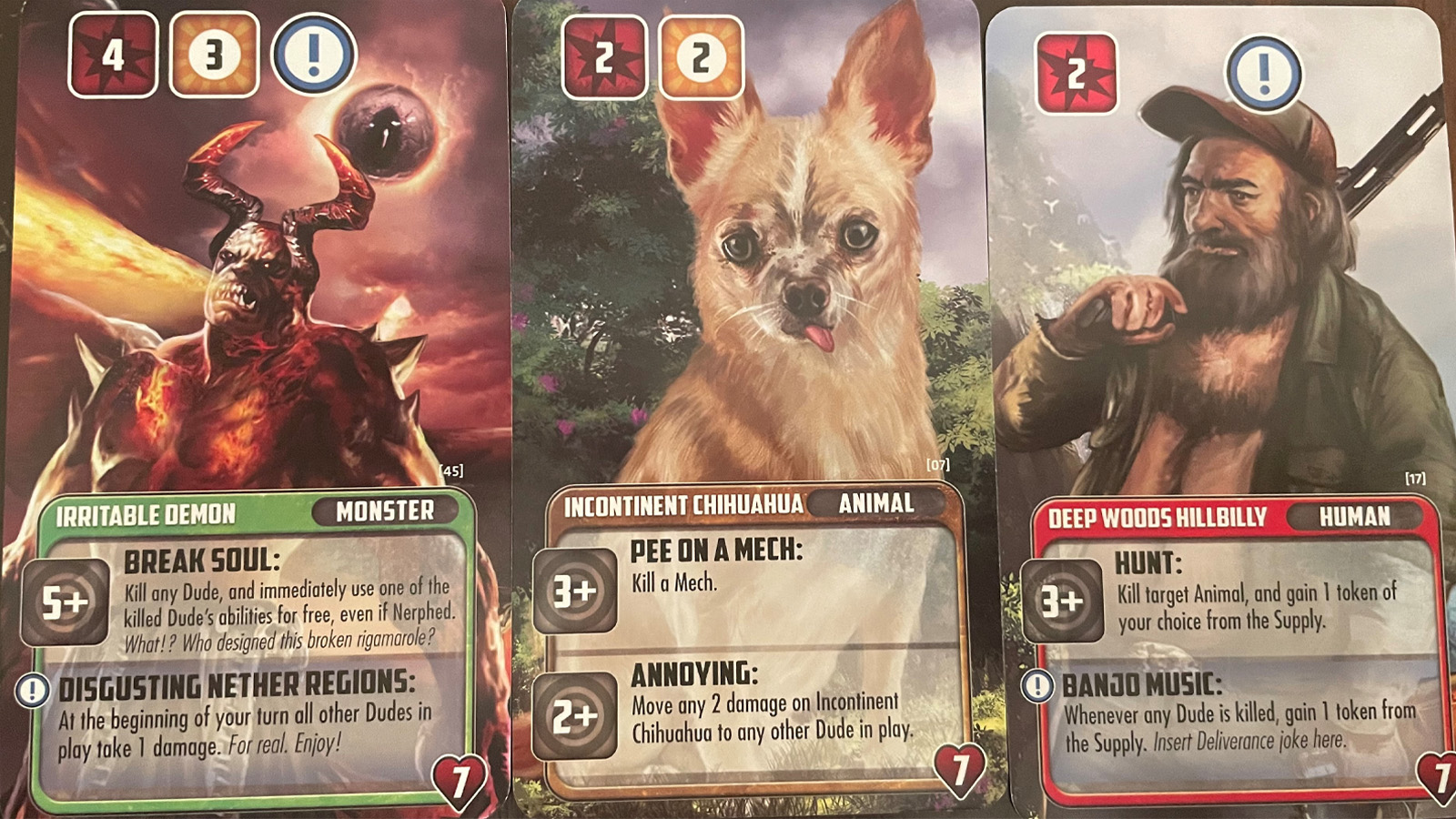 The diversity of all the different cards, strategies and abilities all helped add to the fun of the game and increased the replayability. You might go an entire game without ever seeing a card you have played before or need to combine strategies that you’ve never used based on the Dudes your opponent uses. The Nerph and Shield tokens are nice as they add extra ways to combat powerful cards or protect yours. The card quality is very nice and the size of the cards are perfect for all the information included on them.
O.P. Arena isn’t anything groundbreaking, and it knows what it is. This take-that type of game may not be for everyone as they may not enjoy losing the Dude that they just played this turn before they were even able to use its power. For people who don’t like conflict, this won’t be the game for you. Another potential issue is the extended replayability, especially versus a new person. While a new person will enjoy the cards that are coming out they won’t know everything they do. For someone who has played multiple games, they will already know those abilities and can Nerph them immediately. This takes away from the fun of discovering the power when it’s used and creates an imbalance against a newer player. The ability to only use 1 token a round is also quite annoying at times. If someone doesn’t choose to help team up against a power Dude, it can be almost impossible to Nerph it if the opponent has enough Shield tokens. It would have been nice to be able to use multiple Nerph tokens if the opponent had shields. At the end of the game I had a ton of unused tokens, even though I’d use one on almost every turn. At times I would Nerph something even though it wasn’t a problem just to use the token.

O.P. Arena is a fun lighthearted game which brings all of my childhood fantasy battles to reality in a fun and engaging way. While newer players will be at a disadvantage compared to those who have played before, the quick games and ease of play make it a perfect game for those looking to kill each other in the most ridiculous ways possible.

A father of three with a degree in Mathematics, Jason has spent the last 4 years building his passion for tabletop games. With a collection of well over 300 games he spends a night each week with his family introducing them to new concepts and equipping them with problem-solving skills. Jason enjoys a large variety of games but some of his favorite include Architects of the West Kingdom, Blood Rage, and Terraforming Mars.
Related Articles: O.P. Arena, Tabletop
Share
Tweet
Share
Submit