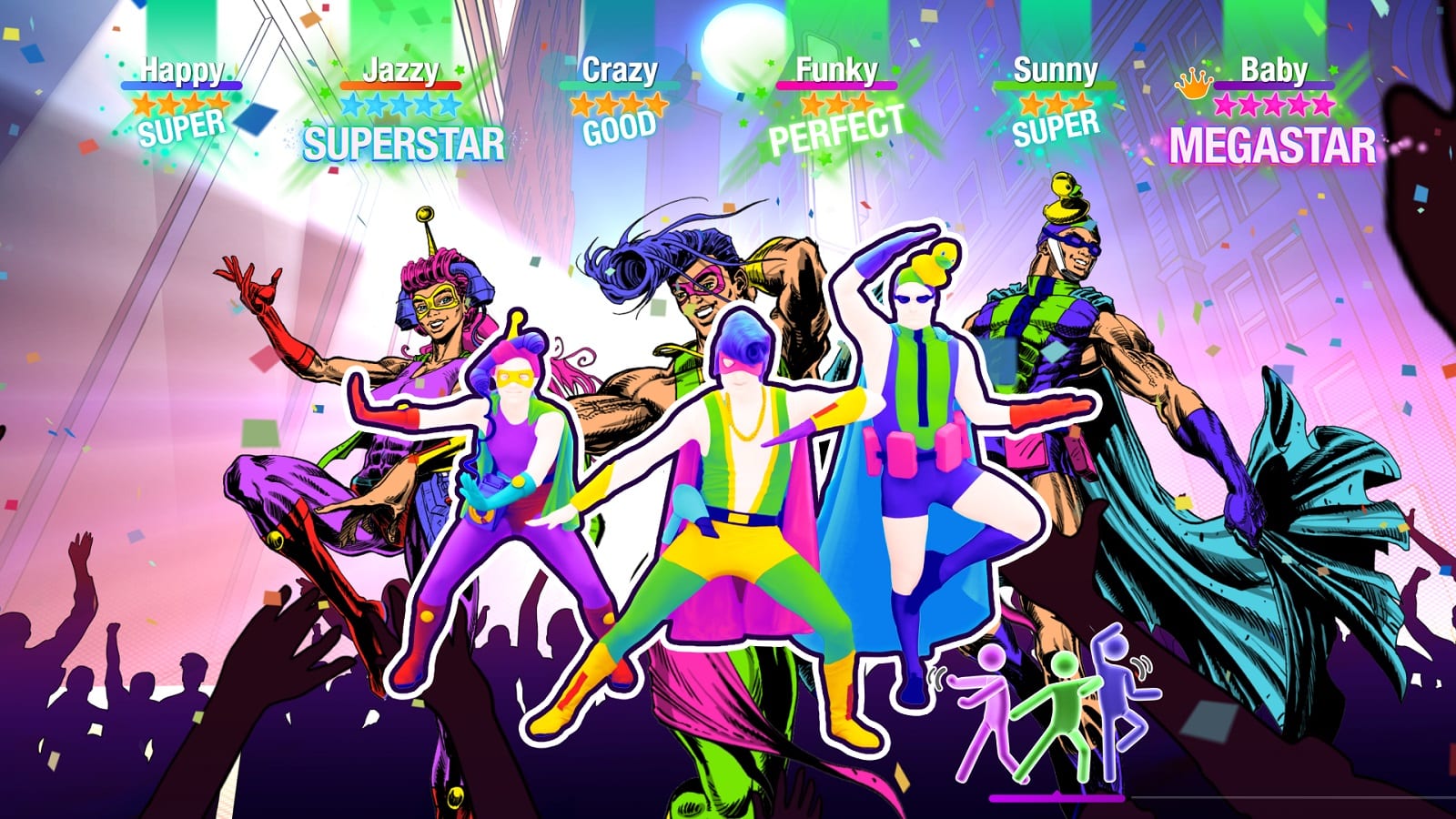 Growing up playing Dance Dance Revolution, I initially scoffed at the idea of Just Dance back in 2009. 11 years later and I can proudly say I continue to play both franchises as much as I can (even if my joints have been getting a little creakier), and I thought last year’s Just Dance 2020 was a great anniversary title. As Gaming Trend’s resident rhythm game fan (second only to editor-in-chief Ron himself), I jumped at the chance to review this year’s iteration. While Just Dance 2021 feels more like a mission pack update than a distinct sequel, it holds its strong song list steady to be a worthy purchase for fans and partygoers alike. 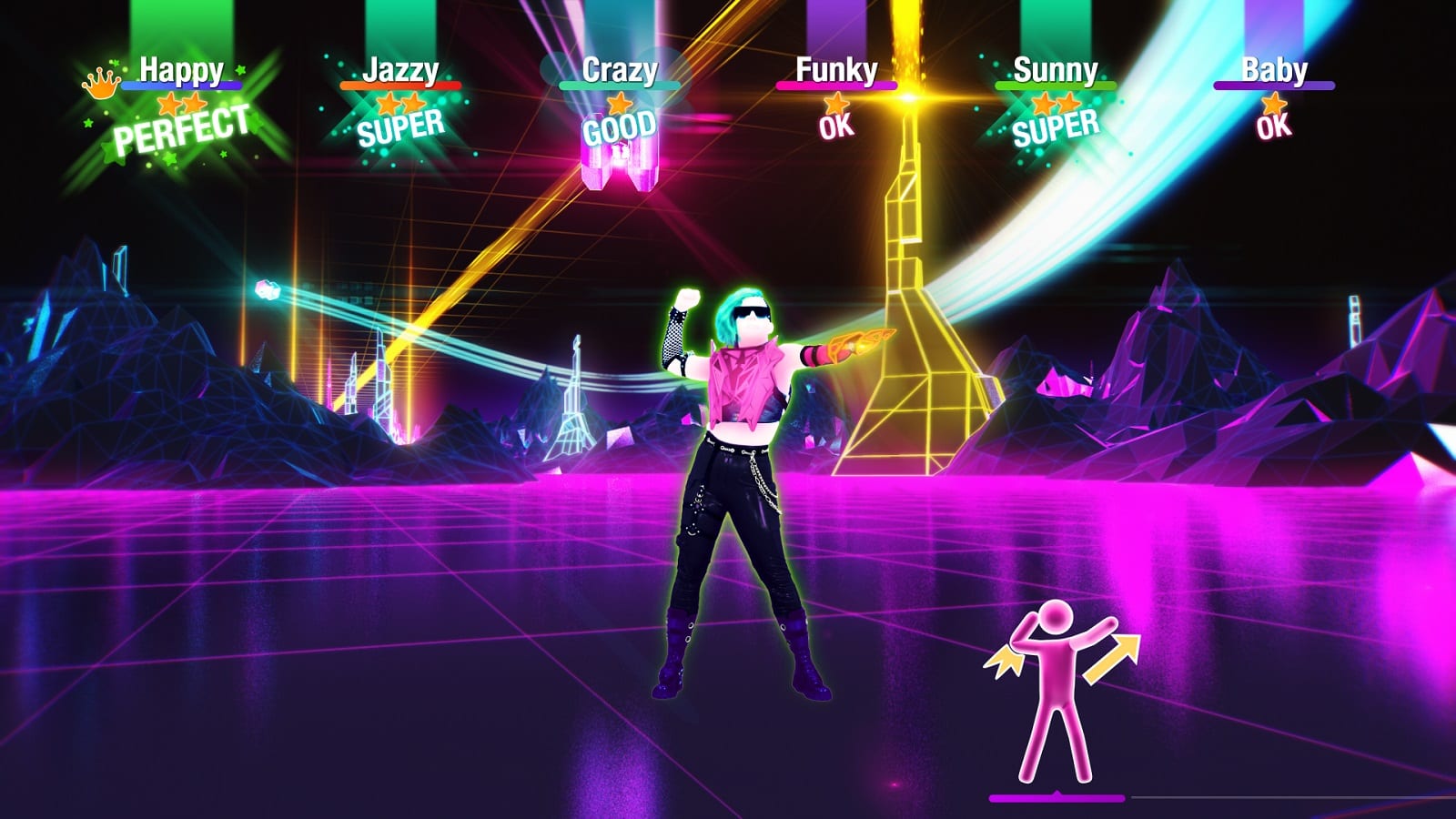 If you haven’t played a Just Dance title, then you won’t be too lost; the instructions are right in the title. Using a Joy-Con or mobile phone, you follow the movements of your selected dancer as they shake, boogie, and glide on the dancefloor. By mimicking the movements of your dancer, you earn points that will grant you different rankings, up to five stars… well, plus Superstar and Megastar ranks. Songs will have a range of one to four dancers, and since you can attach up to six Joy-Con, you can select whichever character to follow. It’s simple gameplay that even small kids can pick up; and actually, there’s a special mode just for them if they want to follow along with cute animals and family-friendly lyrics.

I’ve appreciated recent base song lists of Just Dance games, and 2021 is no different. It seems that Ubisoft has finally perfected its “jack of all trades” megamix with the 40 on-cartridge songs: You’ve got top 40 hits like Dance Monkey and Rain on Me, classic songs like In the Navy (complete with campy YMCA performers), and even an abundance of K-Pop, with Blackpink and Selena Gomez’s Ice Cream headlining the whole shebang. (Don’t worry, RCT 127 and Twice are in the song list too.) International artists are also represented, with everything from Spanish and even Ukrainian songs present. (Oh, and you got the Kulikitaka TikTok meme song here too, can’t forget that!) 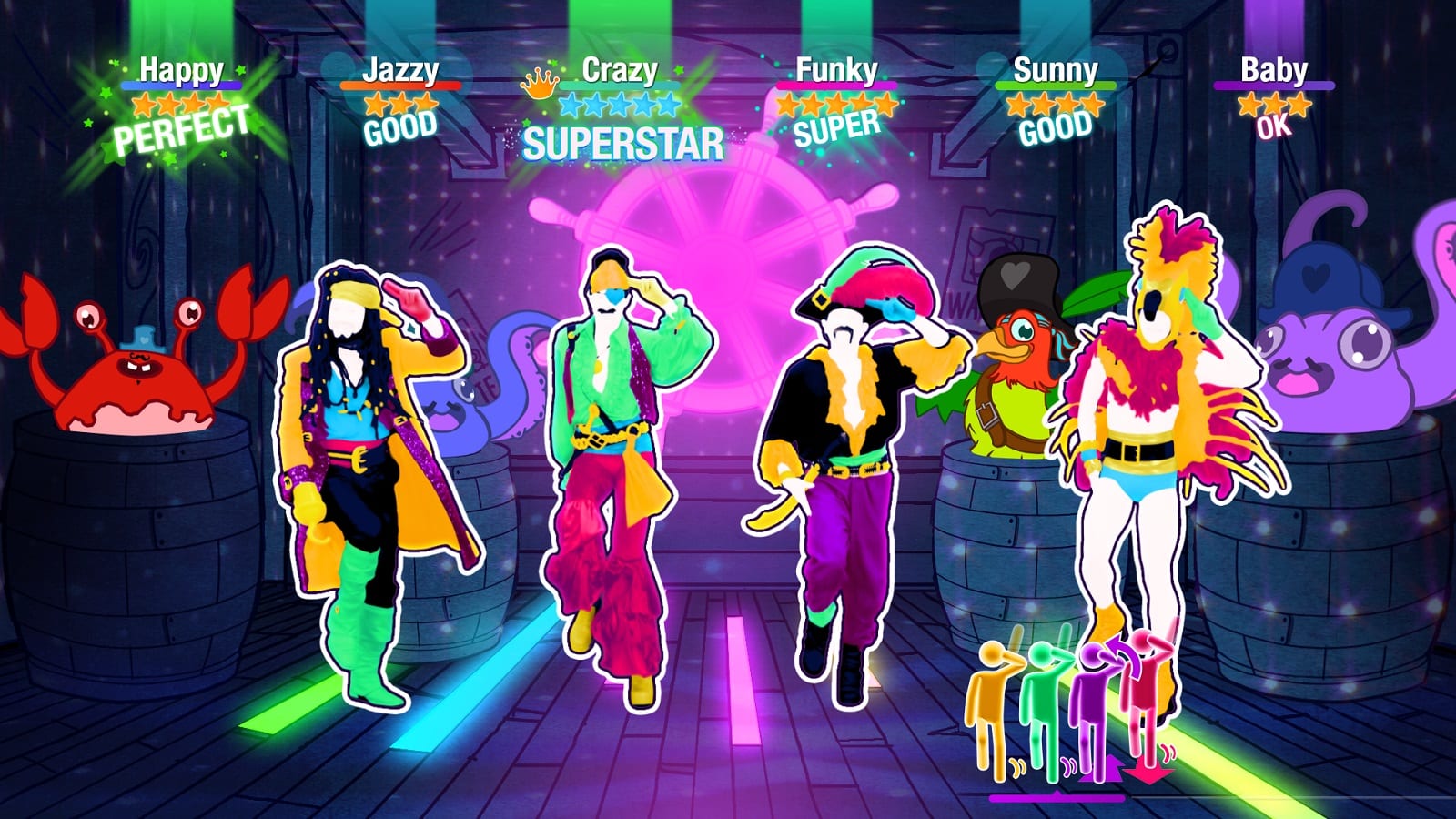 I’m more surprised with some of the more mature tracks this time around; never in my life would I have expected Eminem’s Without Me to be included. It’s probably my favorite routine, as the background elements look like something ripped from JoJo’s Bizarre Adventure. Heck, even Billie Eilish’s all the good girls go to hell makes the cut as (probably) the belated obligatory Halloween routine. For a game that censors even mild profanities, that’s… something. There’s really something for everyone here, and even if nothing captures your fancy with the base 40, a free month of Just Dance Unlimited with 550 songs ought to do you good.

The great thing about Just Dance games is how entertaining they are to play as well as watch. It’s always great to see your friends dance like some weird fusion of Napoleon Dynamite and Patrick Swayze, but it’s also cool to see how colorful each routine is. As the series ditched last-generation versions with 2020 (can you believe the Wii’s final game was released more than six years after it was discontinued?), the game looks amazing now. It’s not a technical powerhouse like this fall’s AAA titles, but I noticed that the game ran smoother and faster on Switch, with Just Dance Unlimited songs streaming at a higher quality quicker than normal. Now that Just Dance isn’t shackled by its original ancestor, it can look like an awesome music video simulator. 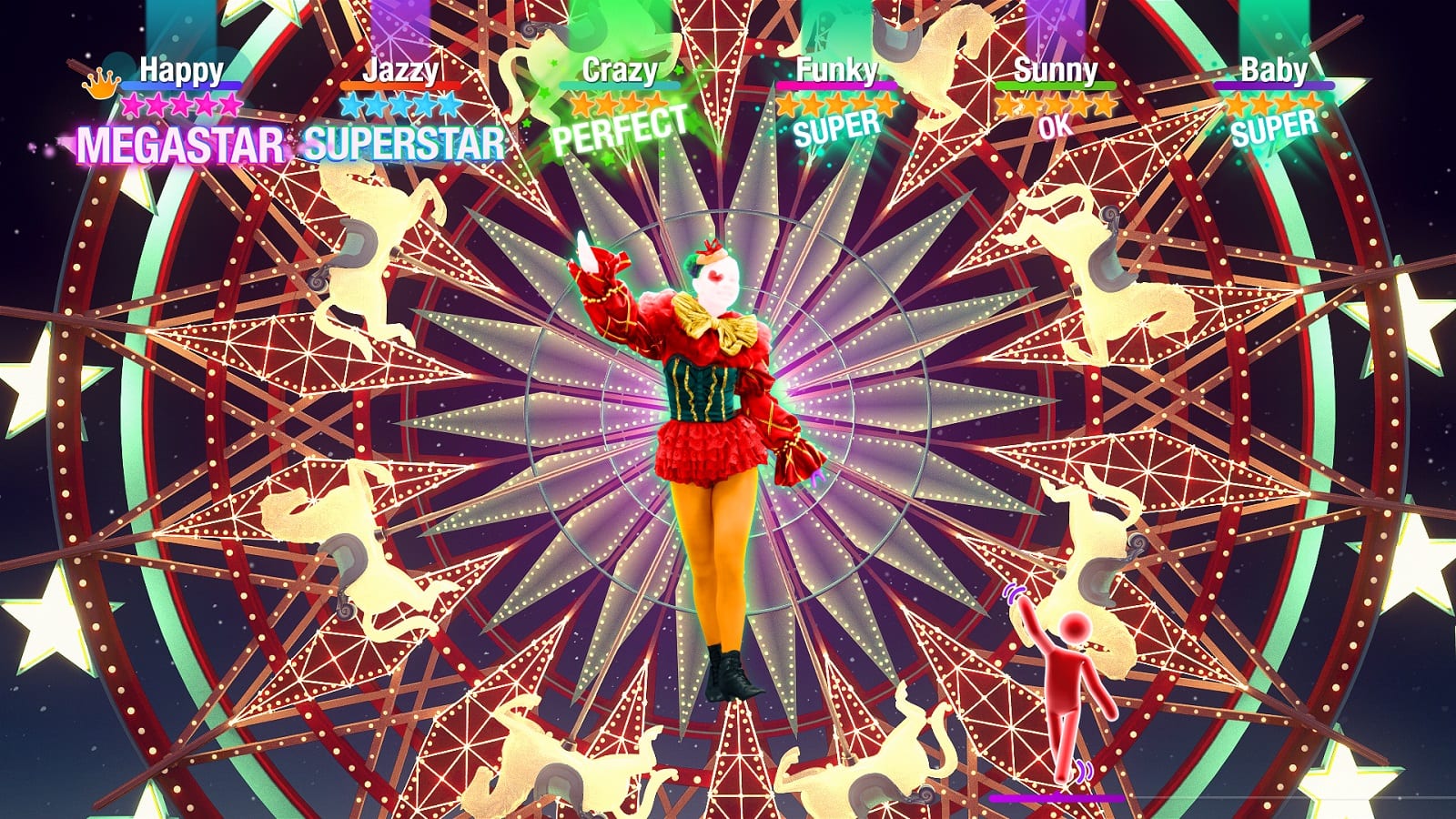 As Ubisoft wants to make this an accessible franchise for everyone, the developer has streamlined the process of the game. Linking my Ubisoft Connect account and even previous save files was a piece of cake, and I was surprised to see how fast it took in order to reload my scores from the previous games into Just Dance Unlimited. You can also jump into the fray using Quickplay right on the main menu, which picks a song at random while you just dance it out. It’s these small ways to begin playing that impress me, and if you want a more competitive online experience, the World Dancefloor is there for your dance competition needs as you compete to get the highest score on randomly selected songs. Unlockables use in-game currency you earn by completing tasks and scoring high on routines, and there’s a bit of motivation to progress by adding little achievements here and there. However, this version also omits last year’s All-Stars mode, which I thought was a fun way to celebrate the history of Just Dance and also act as an extra campaign mode. The fact that there are fewer modes this time around is a bit concerning.

As much as I love Just Dance and how it gets the party going, I do have to lament that it’s starting to have the same problem the home Dance Dance Revolution releases had in the late 2000s: they’re starting to get to the part where they’re glorified roster updates. The new UI for Just Dance was rebooted for the 2019 release (two years ago, confusingly enough), and while last year’s version perfected and improved upon it, Just Dance 2021 feels like more of the same old, same old. Don’t get me wrong, the game looks and performs better than it’s been in ages, and the song list is top-notch for its target audience, but something tells me unless it can reinvent itself next year, I’m going to hesitate recommending the next one. That said, I have to give credit where it’s due and say it’s worthy enough for purchase this time around.

Just Dance 2021 is a solid entry in the franchise, though it might get stale next year if things don’t change. However, its improved performance and bombastically entertaining song list will still get you on the dancefloor this time around.

Elisha Deogracias is an aspiring accountant by day, freelance writer by night. Before writing for Gaming Trend, he had a small gig on the now defunct Examiner. When not being a third wheel with his best friends on dates or yearning for some closure on Pushing Daisies, he's busy catching up on shonen manga and wacky rhythm games. Mains R.O.B. in Smash. Still doesn't know if he's a kid or a squid.
Related Articles: Just Dance 2021
Share
Tweet
Share
Submit