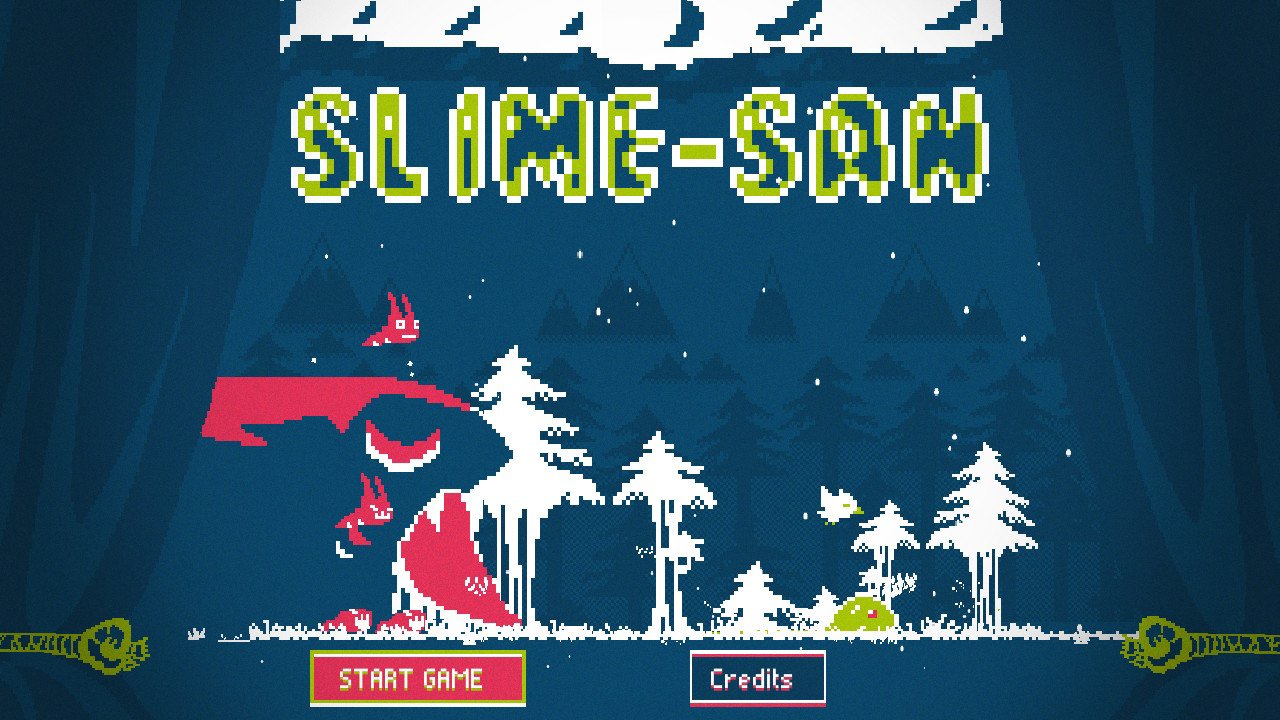 My aesthetic is cute platformers that will punish you at the drop of the hat. While I’m by no means a speedrunner, I can see the appeal of perfecting your run in games like Super Meat Boy and Mega Man, and these games are full of tight controls and difficult yet fair control mechanics. They’re also not too graphics intensive, opting for a stylistic approach that makes those games stand out. It’s with this mindset that I’ve adored my time with Frabazz’s Slime-San, an adorable twitch-based platformer that’s easy to pick up, engaging, and will keep you coming back for more.

Slime-san begins with the eponymous creature getting eaten by a worm. Accompanied with a little bird, our little slime has to make his way out through 100 levels of challenging platforming goodness using three simple mechanics. Most levels are divided into four screens, with an arrow sign directing you where to head next.. In order to traverse the deadly trappings of his worm habitat, Slime must utilize jump, dash, and slo-mo techniques, which are imperative to surviving, as one hit from an enemy or hazard will make you start over from the most recent screen. In addition, on every screen is a soft timer which, after depleting, will release the worm’s acid; touching this will also count as a death. The main game is about frantic yet precise jumps and dodges, and focuses on speed over all else.

The two things that stand out in Slime-san are its mechanics and gameplay. Slime starts out with his moves which is all you need to survive. He can wall jump and jump again, dash out of harm’s way (which will also speed the rest of the level up in time), and slow down (making him transparent and allowing him to pass through green colored walls and obstacle). You’d think that this would get stale after a few levels, but each level uses different gimmicks that will test your mastery in thoughtful and inventive ways. Things like shrinking and enlarging Slime to become increasingly or decreasingly mobile, rising platforms that you have avoid, and streams of water that act as walls are just some of the many obstacles that will spice up the variety of Slime-san.

This is also accomplished with the game’s self-proclaimed “5-bit” color palette; mainly, everything good to touch is green, and anything deadly is red. This also includes enemies that can hinder your progress or help you out by acting as a springboard to jump on. I think it’s an innovative color scheme, especially since the game emphasizes split-second decisions. Having a more colorful game would distract players, and there’s already so much going on within levels. That isn’t to say this game is graphically dull, as the sprites are well animated and full of life. There’s also a host of different 5-color palettes from which to use in case you’re colorblind or want a change of scenery, which I think is a very nice way to make this game more accessible to more audiences. The music is amazing here as well, with chiptune-inspired tracks from a bevy of artists contributing to the old-school feel of the game. It’s reminiscent of the high-energy selections of Pac-Man Championship Edition 2, and amp you up as you keep playing the game.

While each level is markedly different in mechanics, there’s one thing in common with all of them: they’re pretty difficult. Granted, the first dozen or so levels ease you into the game, but everything past that is out to make you restart. In most levels, there are apples scattered around each screen that you can try and get in order to unlock more things in Slumptown, an in-game marketplace filled with some funny animals that happened to get eaten as well. Each level also has a trophy time, which should only be attempted once you get a hang of the levels and mechanics. As a point of reference, the first level has a time of barely less than 20 seconds, which is impossible unless you dash constantly and can abuse shortcuts within screens.)

However, each time you die, you instantly restart, and the splattered slime of your corpse is present to remind you of what not to do again. It might take a few minutes to get to the end of each level, but the way the game frames it, most deaths are justified rather than unfair. Where these deaths are a little less bearable, however, are the boss battles. There are five worlds of twenty levels each, and they’re punctuated with a boss. While they are admittedly unique, they have the tendency to kill you often, and it’s a drag since there aren’t any checkpoints in these levels. Die once, and get sent straight to the beginning. Considering these levels are usually twice as long as regular levels, it makes it a bit of a hindrance when you have to replay each stage again. Longer, scrolling type levels are like this as well, and can cut the flow when you’re trying to speed through the levels. They’re common enough to be noticeable, but aren’t too much of a problem in the overall experience.

If there’s one aspect that surprised me about Slime-san, it’s how much replay value is included in the game. While you can just breeze through the levels, you’ll miss out on a chock full of content in the form of dojo levels (kind of like Smash’s Target practice mode, except you’re using slime to destroy the bullseyes), arcade games, and unlockable goodies that you can buy with those hard-to-reach apples you obtain in the main game. With unlockable playstyles, you can control different slime characters (that come with their own advantages and disadvantages), so it helps to grab one extra character to see if it matches how you go through a stage. There are a lot of nooks and crannies that you can explore within Slime-san’s worm, and I can’t believe it’s oozing with so much personality.

Slime-san is a surprisingly refreshing twitch-based platformer that will put a smile on anyone’s face. Its sharp controls mixed with brutal but balanced difficulty, as well as some well-done pixelated graphics, makes Slime-san a must buy for anyone looking for some platforming goodness.

Elisha Deogracias is an aspiring accountant by day, freelance writer by night. Before writing for Gaming Trend, he had a small gig on the now defunct Examiner. When not being a third wheel with his best friends on dates or yearning for some closure on Pushing Daisies, he's busy catching up on shonen manga and wacky rhythm games. Mains R.O.B. in Smash. Still doesn't know if he's a kid or a squid.
Related Articles: Indies, Slime-san
Share
Tweet
Share
Submit