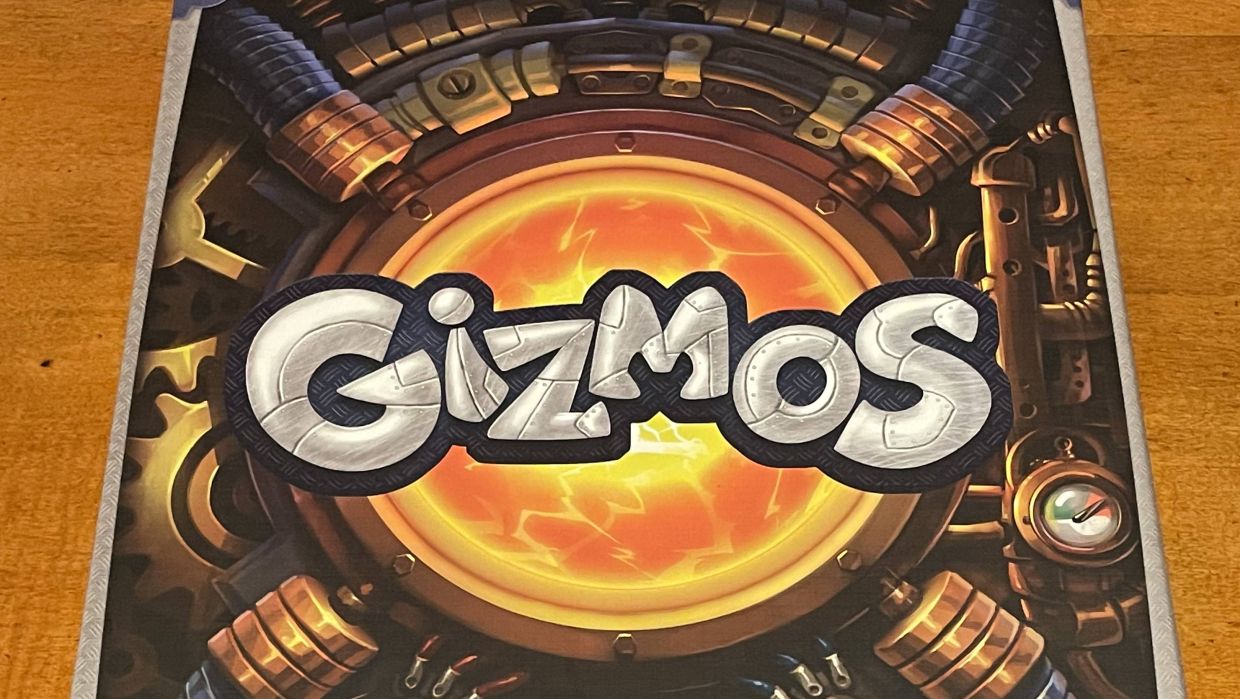 Sometimes first impressions can steer you the wrong way. When I first laid eyes on Gizmos, I thought that it would play similarly to Potion Explosion. The marble dispenser, the marble storage areas, and cards that go into the players tableau felt familiar. However, getting to the meat of Gizmos showed me they were two unique experiences.

Setting up Gizmos involves giving each player a dashboard and an energy storage ring for their marbles. A Starting Gizmo gets placed under the File section of the dashboard. The dashboard is essentially a long narrow piece of cardboard, but it serves two purposes. The first is to place the Gizmo cards in a tableau in an orderly fashion by type. The second is to give a brief description of what each type of Gizmo card does, preventing players from needing to ask what each type of Gizmo does. The dashboard also shows the storage limit, file limit, and research amount the player has. Each player starts with the same amount of these, but they can be upgraded by other Gizmos. The designers should be commended on including something so useful and functional when they didn’t need to.

Next, three rows of Gizmos cards get laid out in the display area. The top row has two level three cards, the row below three level two cards, and below that four level one cards. Each row has their corresponding deck placed next to it. 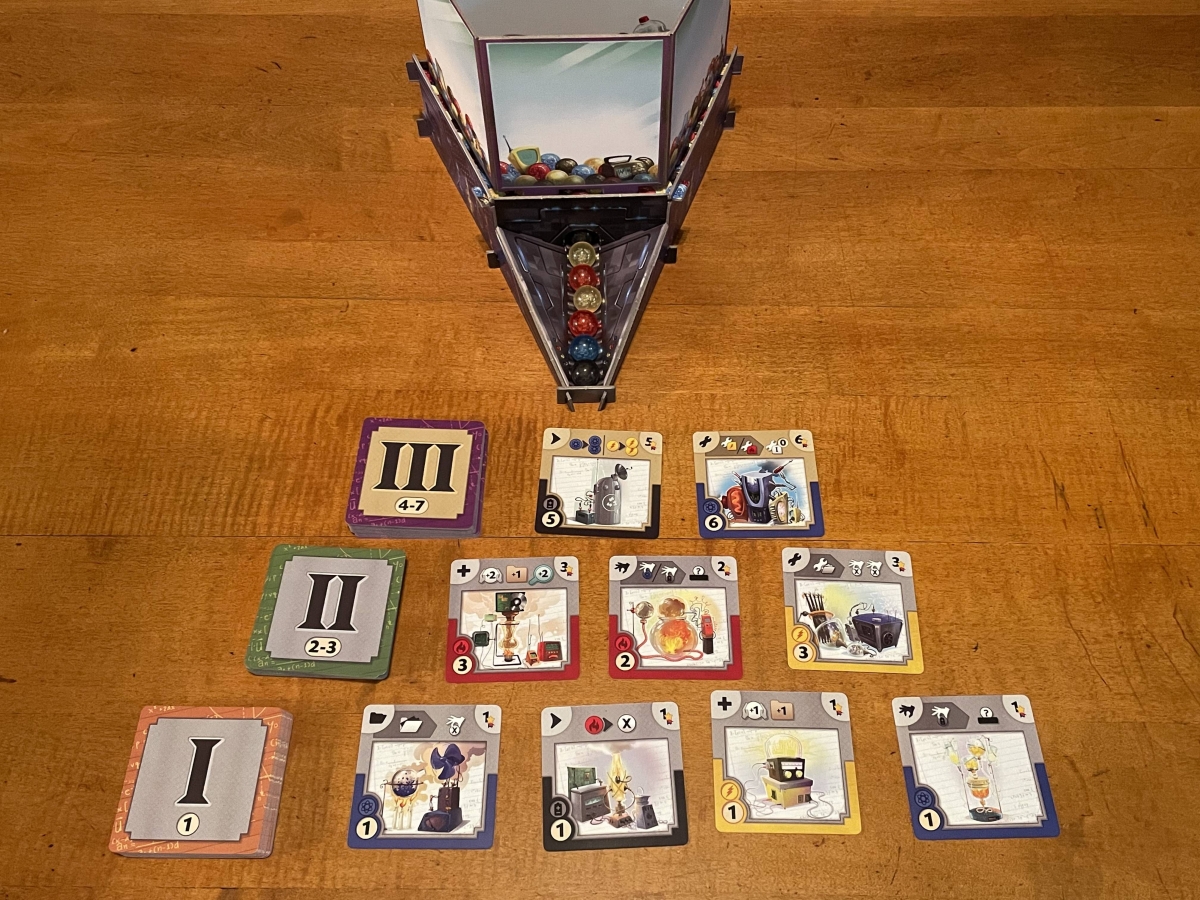 Finally, the energy dispenser is placed in easy reach of everyone. The setup and takedown for the dispenser is very easy, and it fits nicely in the box insert when broken down. The dispenser holds the “energy sphere” marbles in the main basin with an energy row in front that holds six marbles. The energy dispenser’s unique shape and presence on the table make Gizmos stand out.

Each Gizmo has a type, an effect, a victory point value, energy type/color, and build cost. The higher the level, the more it costs, and typically the more victory points the Gizmo is worth.

Now, Gizmos would be a fine game if you just used the marbles to build the Gizmos, but the gameplay really shines when you add in the types and the effects. The Upgrade and Converter Gizmos cards are always in effect and don’t need to be activated. Upgrades often increase the storage limit, file limit, and research amount. They can also give you discounts on building Gizmos or be worth additional victory points at the end of the game. Converters can either allow you to change the marble color to another color or can increase a single marble to count as two. 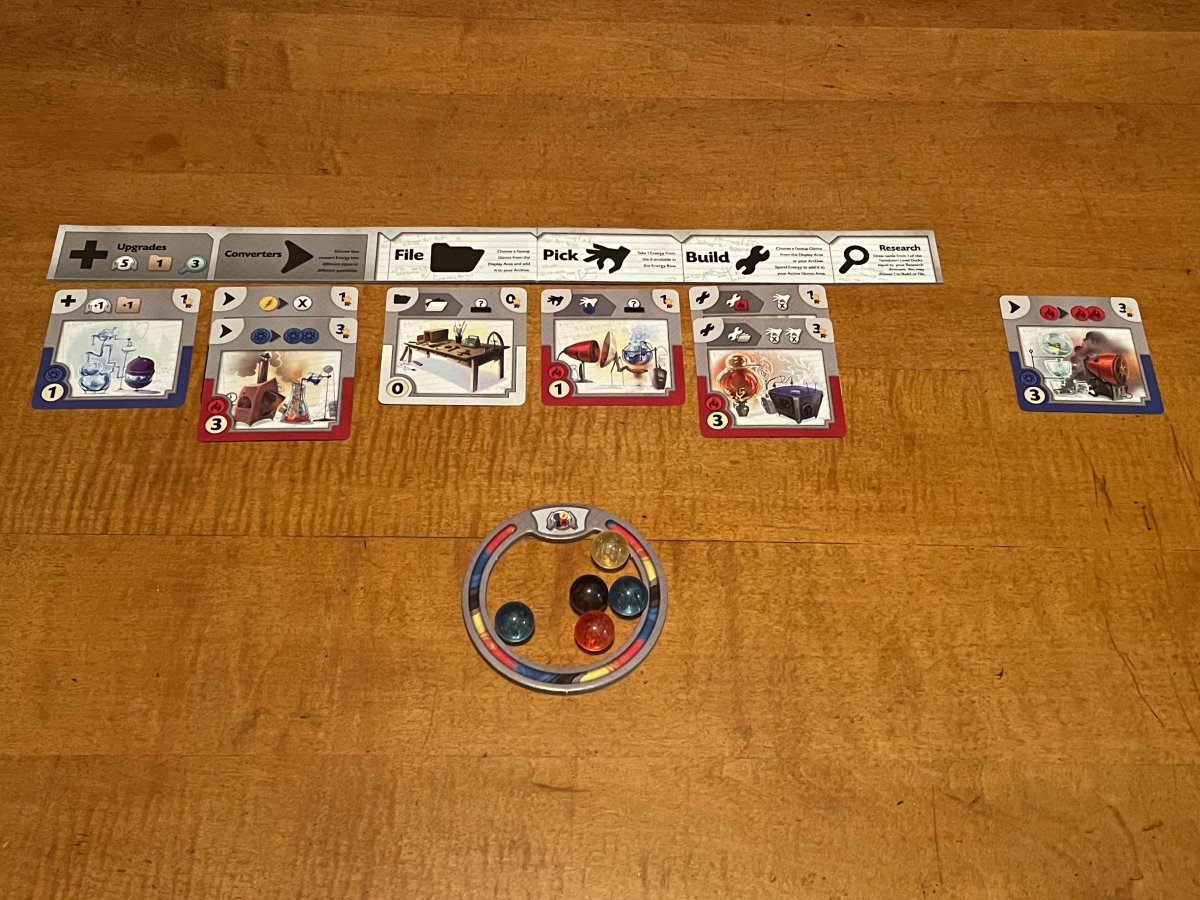 The File, Pick, and Build Gizmos get activated when that action is performed. Effects from these include picking a random marble from the top of the dispenser, gaining additional victory points, and performing other actions. What makes these exciting is the chain reaction it can cause. You might convert a red marble to blue, using it and other marbles to build a blue Gizmo. Building a blue Gizmo might let you perform a pick action, while picking a red marble from the energy row could activate a random draw from the dispenser. Getting these chain reactions adds a lot of excitement to your turn. They are also the best way to win as the first person to build sixteen total Gizmos or their fourth level three Gizmo forces the game to end at the end of that round. The victory points are totaled and the player with the most points wins.

Not every contraption in Gizmos works flawlessly though. The beginning of the game feels a bit ordinary since it seems like the only action you can perform is the Pick action. While it doesn’t take long to do, it feels repetitive until a few Gizmos are built in your tableau. The chain reactions feel great, but it can take a while to figure out which Gizmos were activated during a turn and figure out the best order to play them. This can cause analysis paralysis in some players and make others wait a while until the turn is finished. Finally, the Gizmo cards have nice art on them, but it’s at the cost of symbology. It might have been nice for an explanation of what the Gizmo does explained over the picture.

The color choosing, tableau building, three card levels, and victory points of Gizmos reminded me of Splendor. Once we got a couple of Gizmos built, our group got into a groove and developed strategies. When we finished we all talked about how the concepts were simple but the implementation made for interesting choices. The dispenser didn't hurt either. If you want to go beyond a typical tableau builder or want to go a step beyond something like Splendor, then give Gizmos a try.

While not working as a Database Administrator, Keith Schleicher has been associated with Gaming Trend since 2003. While his love of video games started with the Telestar Alpha (a pong console with four different games), he trule started playing video games when he received the ill-fated TI-99/4A. While the Speech Synthesizer seemed to be the height of gaming, eventually a 286 AT computer running at 8/12 Hz and a CGA monitor would be his outlet for a while. Eventually he’d graduate to 386, 486, Pentium, and Athlon systems, building some of those systems while doing some hardware reviews and attending Comdex. With the release of the Dreamcast that started his conversion to the console world. Since then he has acquired an NES, SNES, PS2, PS3, PSP, GBA-SP, DS, Xbox, Xbox 360, Xbox One S, Gamecube, Wii, Switch, and Oculus Quest 2. While not playing video games he enjoys bowling, reading, playing board games, listening to music, and watching movies and TV. He originally hails from Wisconsin but is now living in Michigan with his wife and sons.
Related Articles: Gizmos, Tabletop
Share
Tweet
Share
Submit