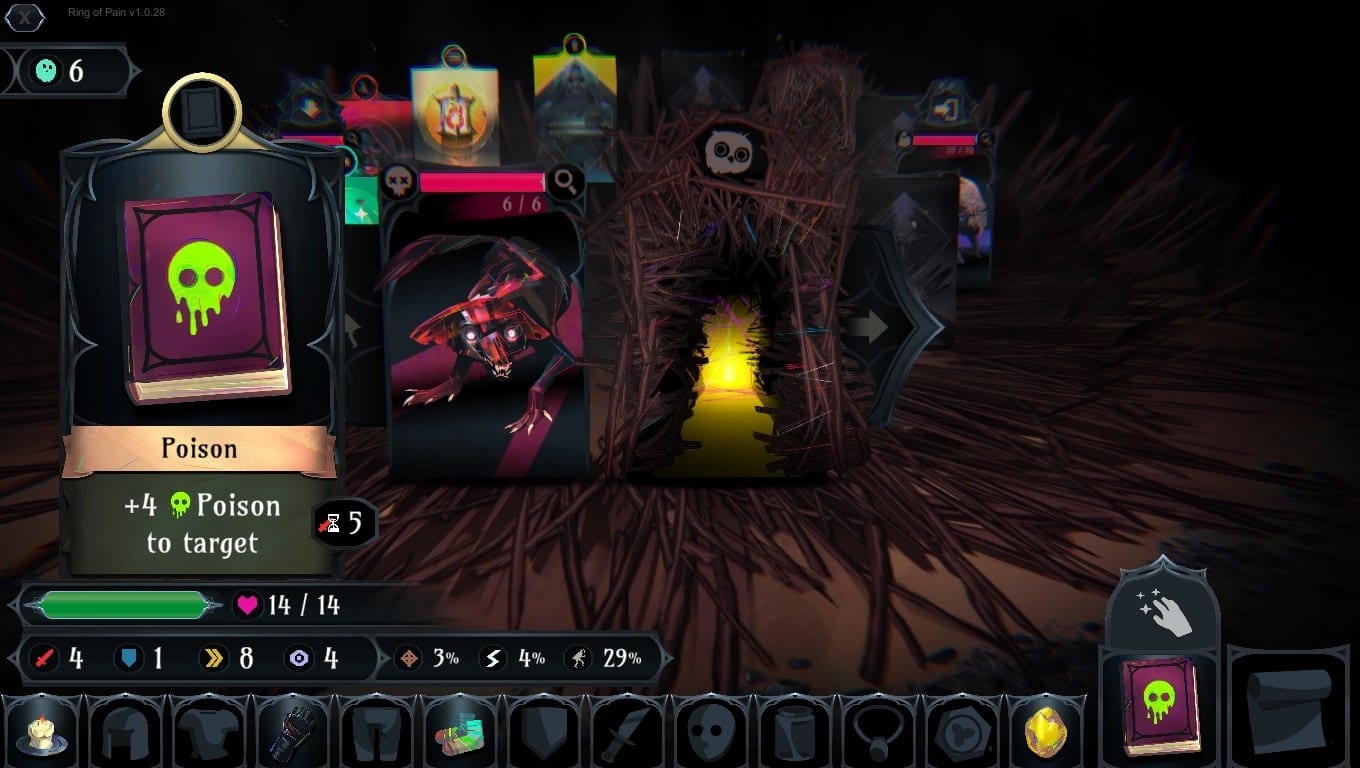 The line between good concept and good implementation is a fine but important one, and Ring of Pain is unfortunately on the wrong side of it. This miniature roguelike has great aesthetics and mechanical principles, but doesn’t seem to know what to actually do with any of those things. In the first few minutes you will be intrigued at the presentation and the quick, flashy gameplay. Not long after you will find yourself unsatisfied by finding just how little lies underneath the surface. If Ring of Pain were designed as a purely mobile experience it might have a home, but if you ever give it the full focus of your attention, it won’t be for very long. That said, it does have some fun to offer as a distraction, but little more than that.

Ring of Pain places you in a dark wood, beset by grotesque creatures trying to eviscerate you. Is this a nightmare of some kind? Why are you being brought back after every death? The game is scant on explanations, and despite pretending to have something more under the surface, even after beating the game you will find little in the way of explanation or development. 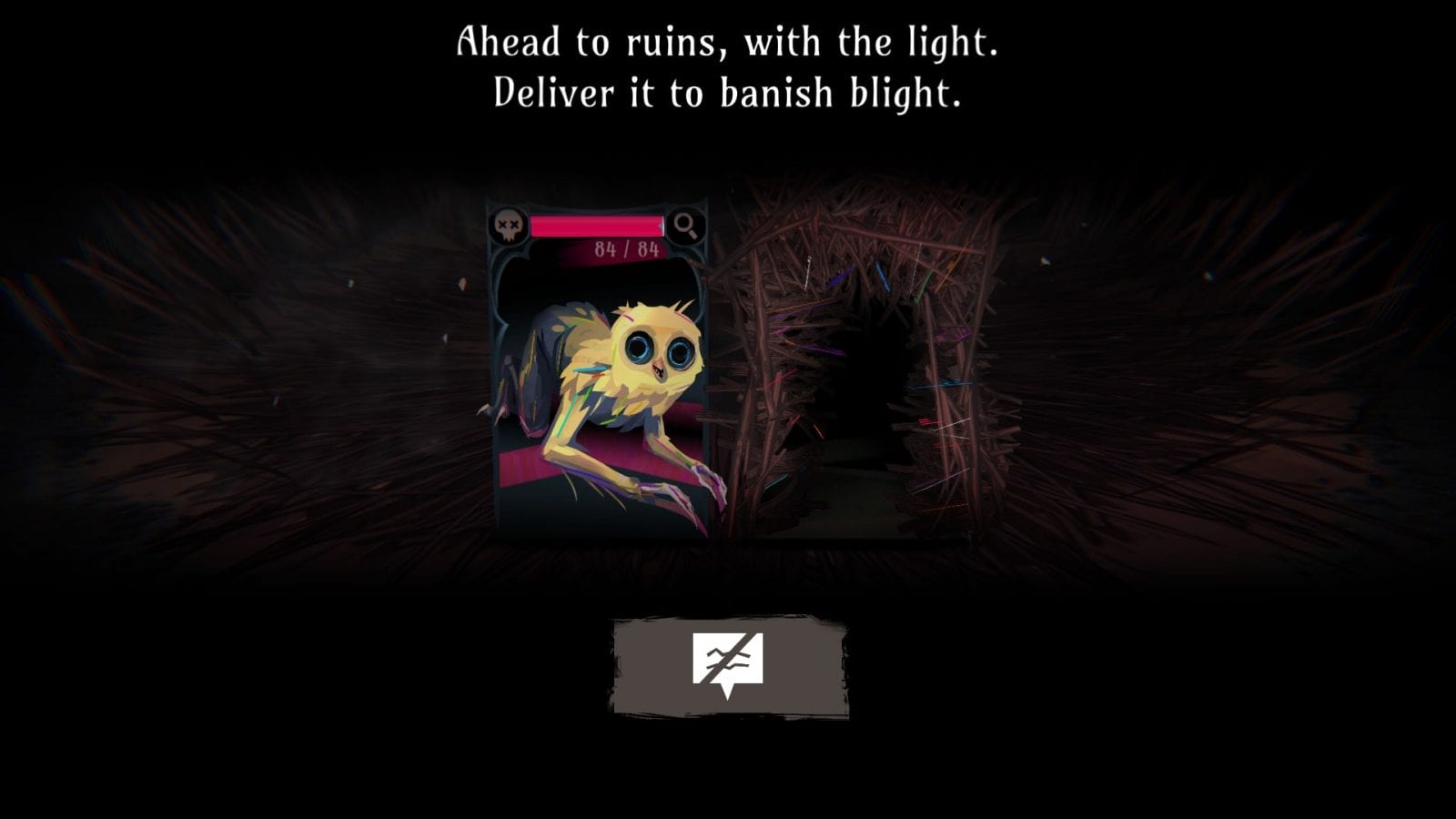 The game features a few chances to speak to NPCs, but with little result or meaningful choice

The aesthetic and music at the heart of Ring of Pain are easily the highlights; rings of thorns poke through the darkness, giving even the brief moments of respite a sense of threat. Before you get bored with the game, you will feel a sense of dread looming over you, as if something more potent were always in control. The music and sound effects contain a similar aura of dread, and it’s worth listening to the soundtrack on its own.

The game sees you seeking to escape from your mysterious prison by means of gaining equipment to strengthen your stats and defeating the foes that stand in your way, all while navigating to the end of each location. Each location is composed of a ring of cards, two of which are presented to you at a time. These cards can be exits, monsters, equipment, or health potions, and their spacing is of crucial importance. Your only actions are interacting, moving to the left and right (thereby shifting which cards you are faced with) and using any spells you have on hand. Interacting with a monster means attacking it, but the monster will strike back, either before or after you depending on who has the higher speed.

You can attempt to bypass a monster, testing your stealth stat to avoid giving them a free attack. Each monster you defeat will grant you Souls, the currency you can use to purchase more equipment or spells. Ultimately you are trying to balance your offensive capabilities to obtain souls and empower yourself, while also finding the exit before you take too much damage.

The core gameplay concept is pretty interesting and even engaging. You can attack or move, going through combat encounters to find the exit. Buried in are treasures and monsters to fight for souls used to unlock equipment. This is almost as simple as it sounds, but not quite, as you will only survive if you make careful use of your positioning. Some monsters will not attack, but will instead explode to the left and right after taking an action. Some will move towards the exit upon striking, depriving you of their souls and an extra treasure they carry. You will find monsters that box you in from the exit, and portals that send you to other locations on the ring. For the first fifteen minutes or so, this feels like an invigorating challenge. Then you realize what’s really going on. 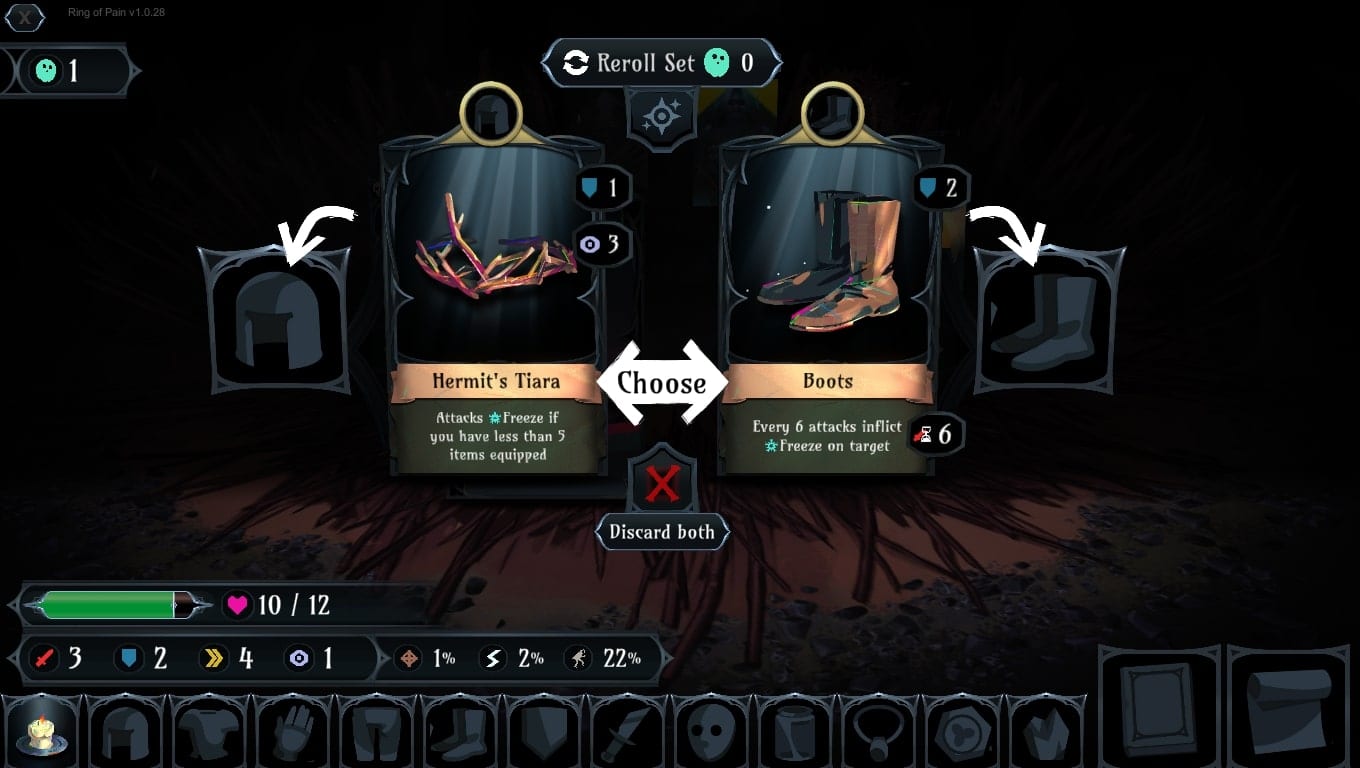 Playing Ring of Pain feels much like sitting at a slot machine, but for a modicum of input on your part. Your runs will be, at an absolute maximum, only a few minutes long. They are short enough that you feel comfortable launching right back in, hoping that maybe next time things will go right. While there is a modicum of skill to Ring of Pain, the true delineator between success and failure is luck, plain and simple. Will you start out with good equipment or some big creatures and no attack bonuses? Will you get the very few pieces of equipment that feed into each other or just as likely the ones that contradict one another’s benefits? The skills that Ring of Pain does utilize tend to be pretty simplistic, and quickly lose their charm. Many of them also require some luck to pull them off, largely defeating the purpose.

If this were a mobile game, I don’t know that I would have the same complaints. Ring of Pain isn’t exactly bad you see, it’s just mindless. You make quick, simple decisions one after another in a game where the longest runs are still only a few minutes. Just like with a slot machine, you will find yourself sitting there, hoping that the right collection of materials will line up to let you win, and it almost never does. The runs are so short though that you can dip right back in, looking for that endorphin rush, but if you want any substance or memorability, you’re in the wrong place.

As a roguelike, there is also little to uncover here. Most of the time, the first few locations will consist of the same monsters and choices, in mildly different configurations. During the game you can choose from a few different rooms, but these are by no means branching paths. Rather, there are some points where you can choose between a few sets of side locations. These tend to be exciting the first time you go to them, as you find what each new location has to offer you. Sometimes the answer is nothing, or that they are actively detrimental to you, but at least it adds some variety.

That’s not to say that this review is a complete condemnation of Ring of Pain. With the creature’s imaginative designs, thematic music, and fast pace, it is something you can put on while you watch tv in the background. For an asking price of $20, it’s not entirely unreasonable, but be forewarned that you will tire of its charms quickly.

Ring of Pain shows creativity and promise, but all to little depth to carry those qualities through. The choices presented by the game are interesting in principle, but in practice your success or failure are determined by luck more than anything else. The result is a game defined by repetition, which struggles to justify the time it asks of you. That said, for a minor price and a fun few runs, you could do far worse as a distraction.

John Farrell is a legal aid attorney specializing in domestic violence, living in West Chester Pennsylvania. You can listen to him travel the weird west as Carrie A. Nation in the Joker's Wild podcast at: https://jokerswildpodcast.weebly.com/
Related Articles: Ring of Pain
Share
Tweet
Share
Submit