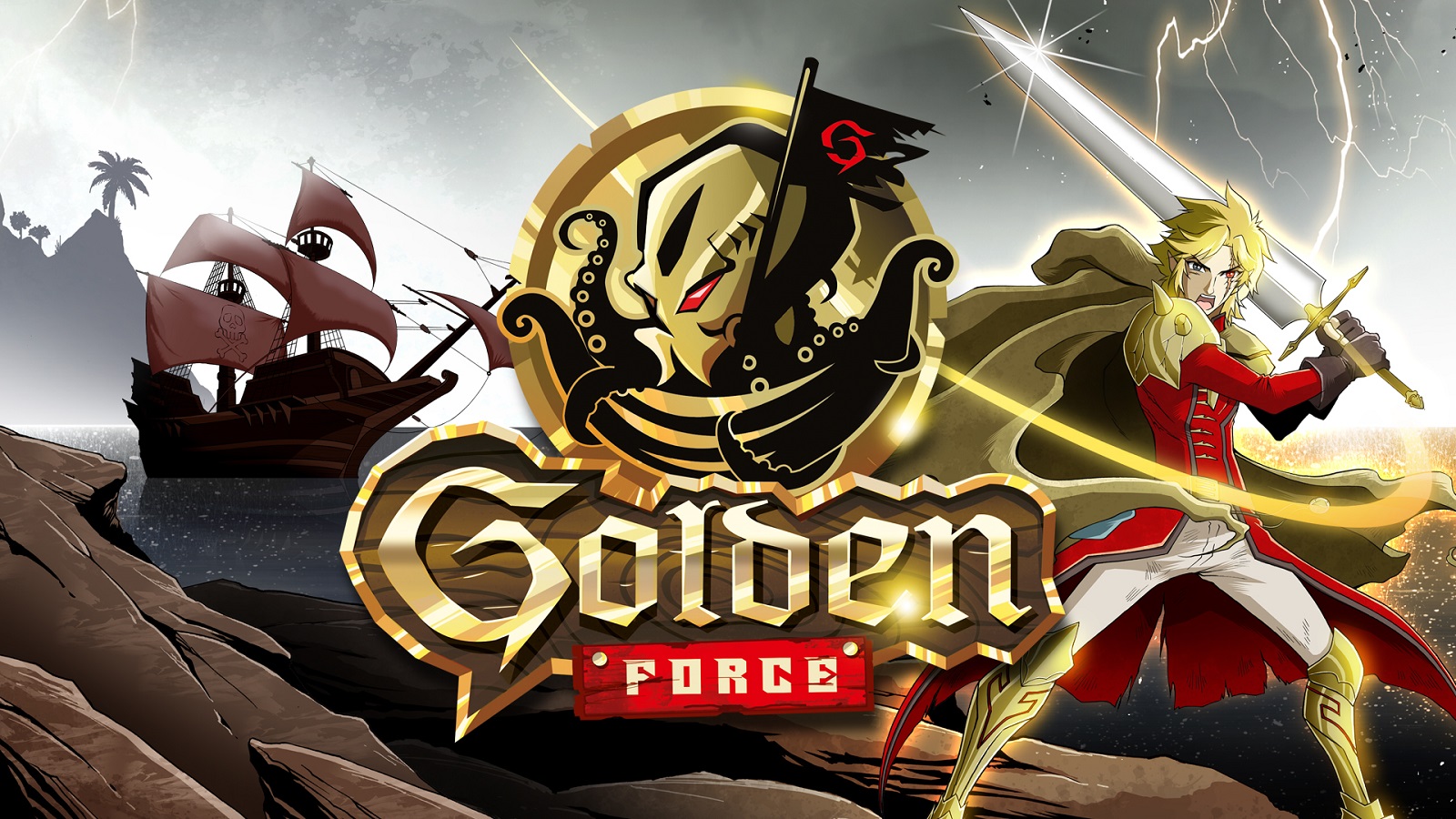 It’s no secret that I’m rather partial to a bit of pixel art and that I have a great love of 8-bit and 16-bit generation gaming, having grown up with those classic systems and games and I still maintain a respectable retro collection. I bring this up because Golden Force is clearly and unashamedly channelling classic games from that era, the retro-inspired thing being somewhat popular these days and having produced some great hits like The Messenger, Cuphead and perhaps to a lesser extent Streets of Rage 4, to name a few. But does this offering from Storybird Studio have the golden ticket, or will we find a chunk of fool’s gold?

Golden Force puts us in control over one of four mercenaries who together form “the Golden Force”. On an adventure to fill their pockets with gold and dodge bankruptcy after spending a fortune on various vacations, they set out to the adventure to undiscovered Islands of Muscle Archipelago to do just that, after receiving a contract to go and rid the place of the King of Demons who has apparently turned up and caused some bother for the locals there. Ok great, so they are a bit like a pirate-themed version of the A-Team I suppose. The game doesn’t give us much more than that and it doesn’t really need to but I admit to being curious how the Demon King found these undiscovered Islands if they are, you know… undiscovered but, ok sure whatever. 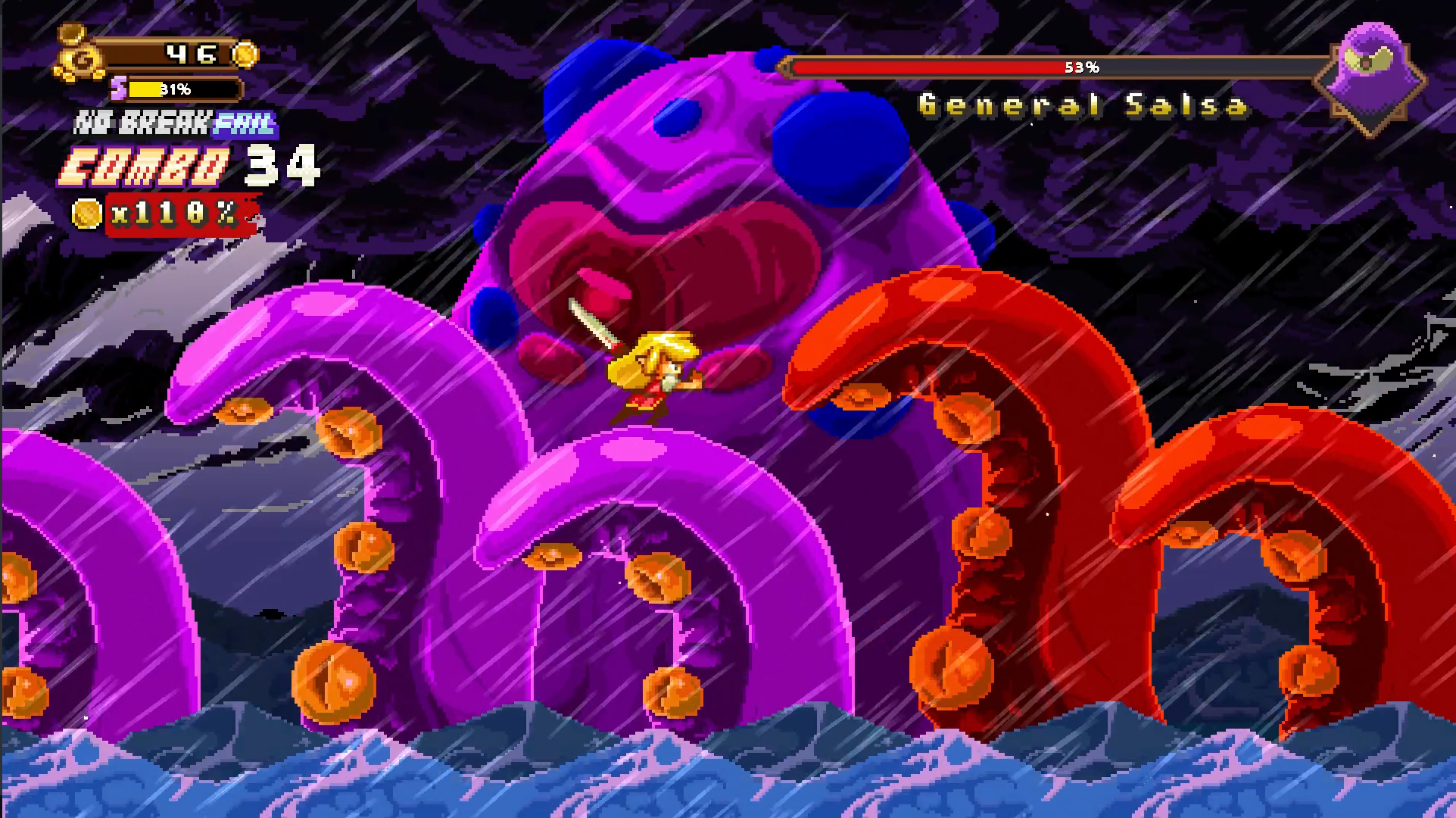 Taking control of either Gutz, the typical guy-with-sword character, Spina, who looks suspiciously like Shantae to the point that I do wonder if the half-genie hero is doing some moonlighting on her days off, Drago, the dragon person with an axe or Elder, who is…. Umm, The old guy? Golden Force opens strong with the first stage being a boss battle against a giant octopus’ enemy. We’re basically thrown in at the deep end with only minor prompts at how the game works, it’s an effective way to teach us the ropes and a method many of those old golden era games used and one that works just as well today.

Golden Force is certainly an attractive game, with detailed sprite work presented in a cheerful and vibrant color pallet that makes the whole world pop nicely with good, generally smooth (More on that shortly) animation. Biomes change up the scenery between levels while enemies are varied and creative with some of the huge bosses, in particular, being quite impressive. Audio is also rather pleasing; pulling off a convincing enough retro sound and fitting the visual style of the game well. Overall, the presentation here is a win for Storybird Studio. However, there are some tragic performance issues to contend with, at least on the Switch version reviewed here — frame rates will drop sometimes significantly for no apparent reason at times and not just in busy scenes, even in areas with no enemies present I was experiencing noticeable and jarring dips. 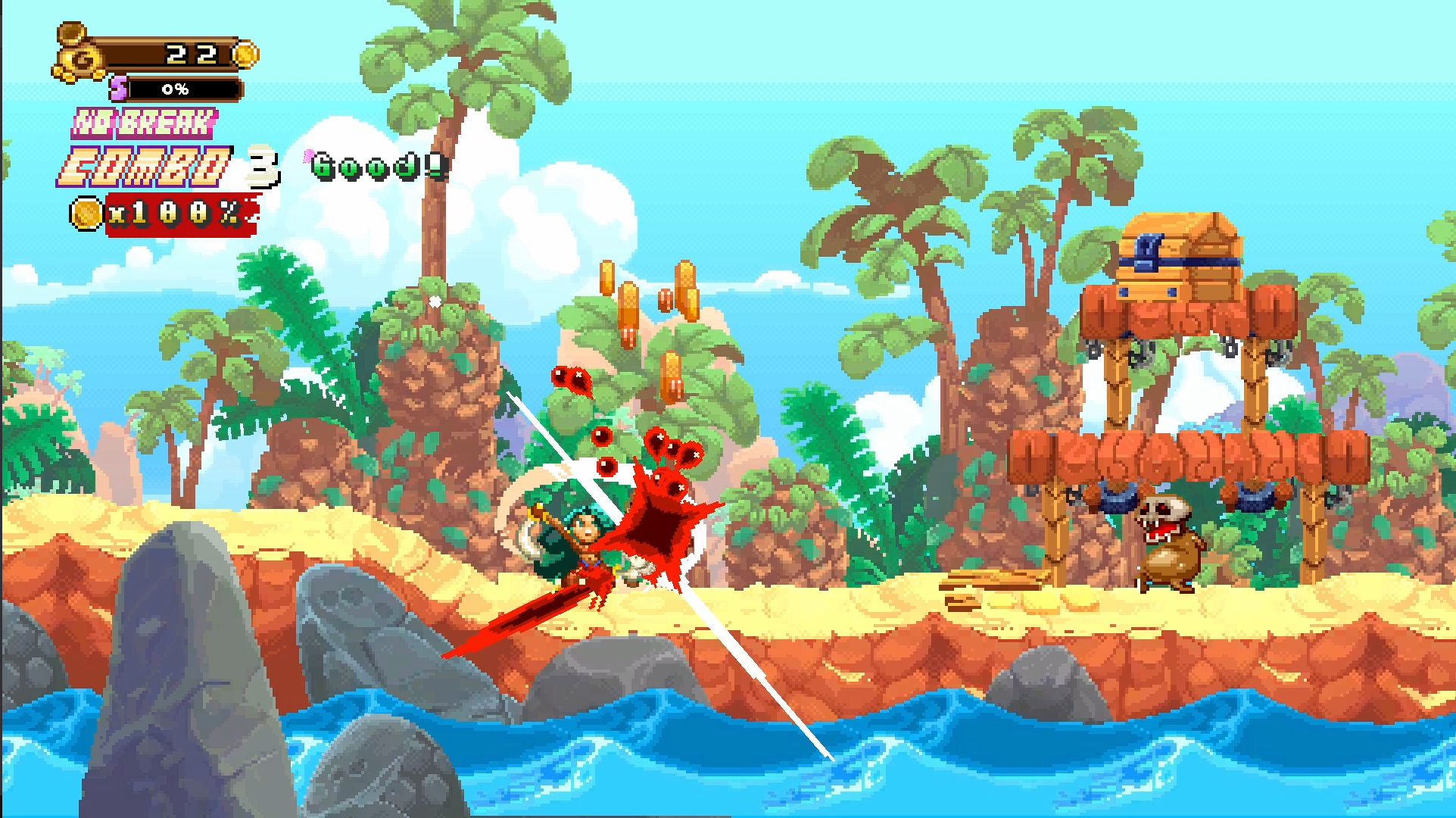 Gameplay-wise Golden Force is pretty solid for the most part. Our four mercenaries all seem functionally the same with no real difference that I could detect in how they move or fight, which seems like a missed opportunity to mix things up a little. Combat is a hack n slash affair with a regular attack, a “crush” attack that slams enemies around the screen, and a dash attack that pulls double duty as a means of locomotion to clear large gaps or reach high ledges. There’s also your basic jump and a slide move which feels somewhat redundant when you can just use the dash attack to achieve the same goal. It’s pretty basic but once you get into a rhythm, chopping through enemies can at times feel somewhat slick and stylish particularly when you start batting back incoming projectiles and smashing enemies into each other. There are collectables hidden around each level which you can spend on permanent upgrades or spend the coins gathered during gameplay on consumable power-ups like potions that apply fire or ice elements to your attacks or refill health, all of which adds incentive to hunt around the levels or replace previously cleared stages.

Cracks started to appear pretty early on though when I couldn’t help but feel the game was trolling me. Golden Force is somewhat difficult, we’re not talking NES Hard here but it’s not taking any prisoners either, with one checkpoint roughly halfway through a level, if you fail then the game will kick you right back there or to the start, whichever is closest. That’s all well and good but a lot of the difficulty seems to come from things you could not have seen coming, be that traps, running into enemies or projectiles appearing from off screen. Then there are the leaps over gaps or spike filled pits which you’ll clear with ease on one run but fall several feet short on the next run. It all starts feeling a little inconsistent; feeling less like you secure a hard-fought victory with skill and more like you’re rolling invisible dice. I also had to put the game down at one point after it randomly dropped me right through the scenery to my doom. 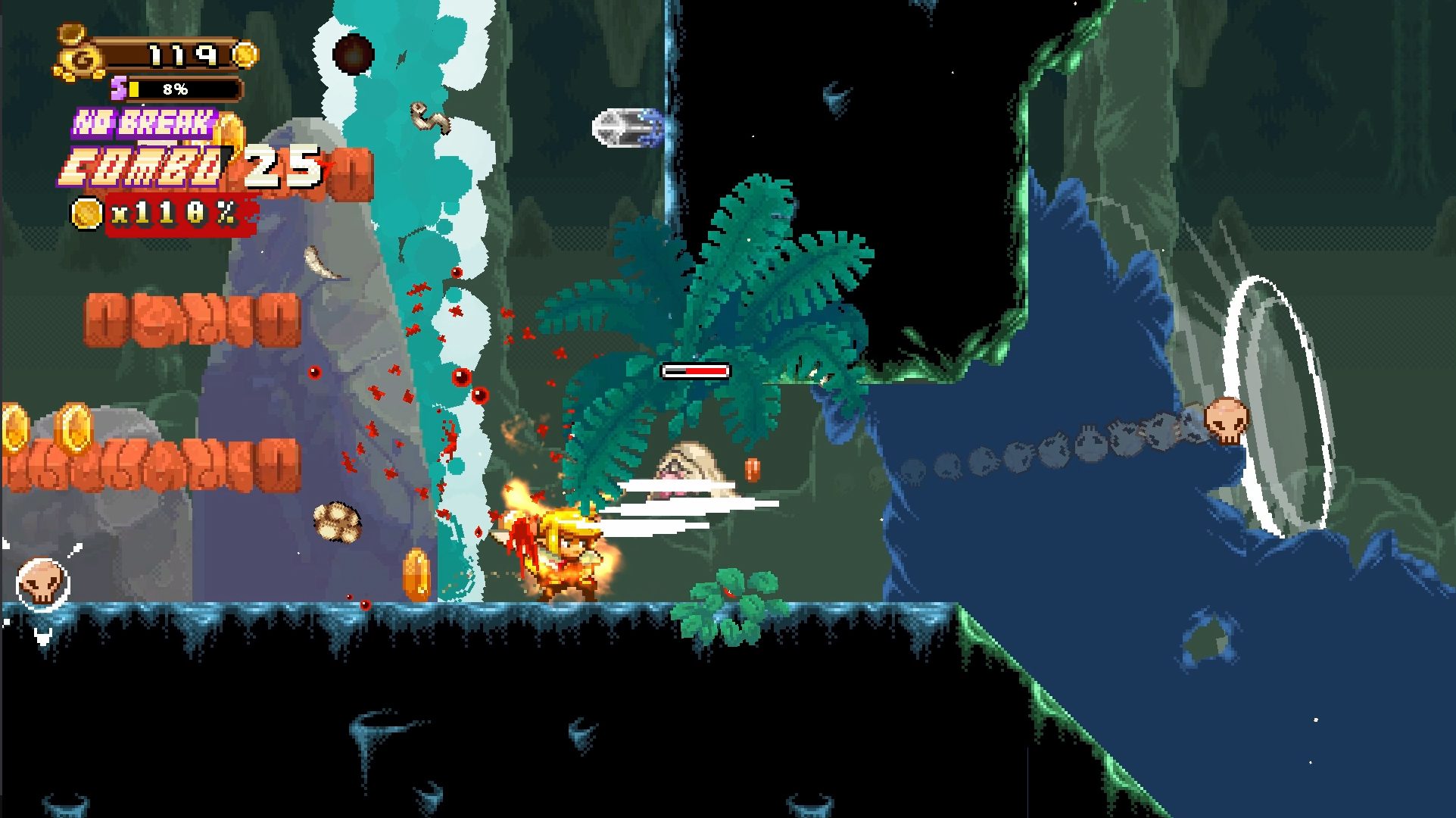 I don’t know exactly what’s gone wrong under the hood of Golden Force, it isn’t my job to figure that out. No, rather it is my job to be a critical ass hole and pass judgement over the work of people far more talented than myself so with that in mind if anyone at Storybird Studio should ever take a look at this, I have some ideas;
First and foremost, sort out the frame rate issue, I’m playing a patched version at the time of writing so you’re clearly on it, but there’s room for improvement and it’d go a long way to smoothing out some of the other gripes. Second, increase the jump height by a few pixels and increase player movement speed a little, call it 5%. That would make the whole experience just that bit more fluid and make dodging things more feasible without compromising the overall difficulty of the game. Third, decrease the charge-up time for the crush attack a little bit, I constantly felt like the attack should be ready half a second before it actually was but to balance this, have it plant the player in place rather than slow them down. Oh, maybe increase the speed and/or distance travelled by the slide but take away the free attack and give us a downward attack when airborne, it just feels like it should be there and would keep the pace of the game flowing well.

To wrap this up, I feel a bit bummed out by Golden Force. I really appreciate the simplicity of it, the game is very well presented, sounds great and has some lovely enemy design and I really wanted to enjoy the game and tell you to go and buy it, but the performance issues paired with the unfair difficulty in places ended up making it a bit of a chore to play. This is all stuff that could be ironed out in future patches (v1.1.1 reviewed) but at the time of writing these things need to be highlighted. So close but it falls short of a solid recommendation.

There’s a good game in here somewhere and I really want it to break the surface, but performance issues and questionable difficulty are holding down a great game.

Grumpy gamer from UK with a keen interest in retro gaming and modding. Can also be found cycling up and down mountains, walking dogs, watching Sci-Fi and reading all sorts of books.
Related Articles: Golden Force
Share
Tweet
Share
Submit