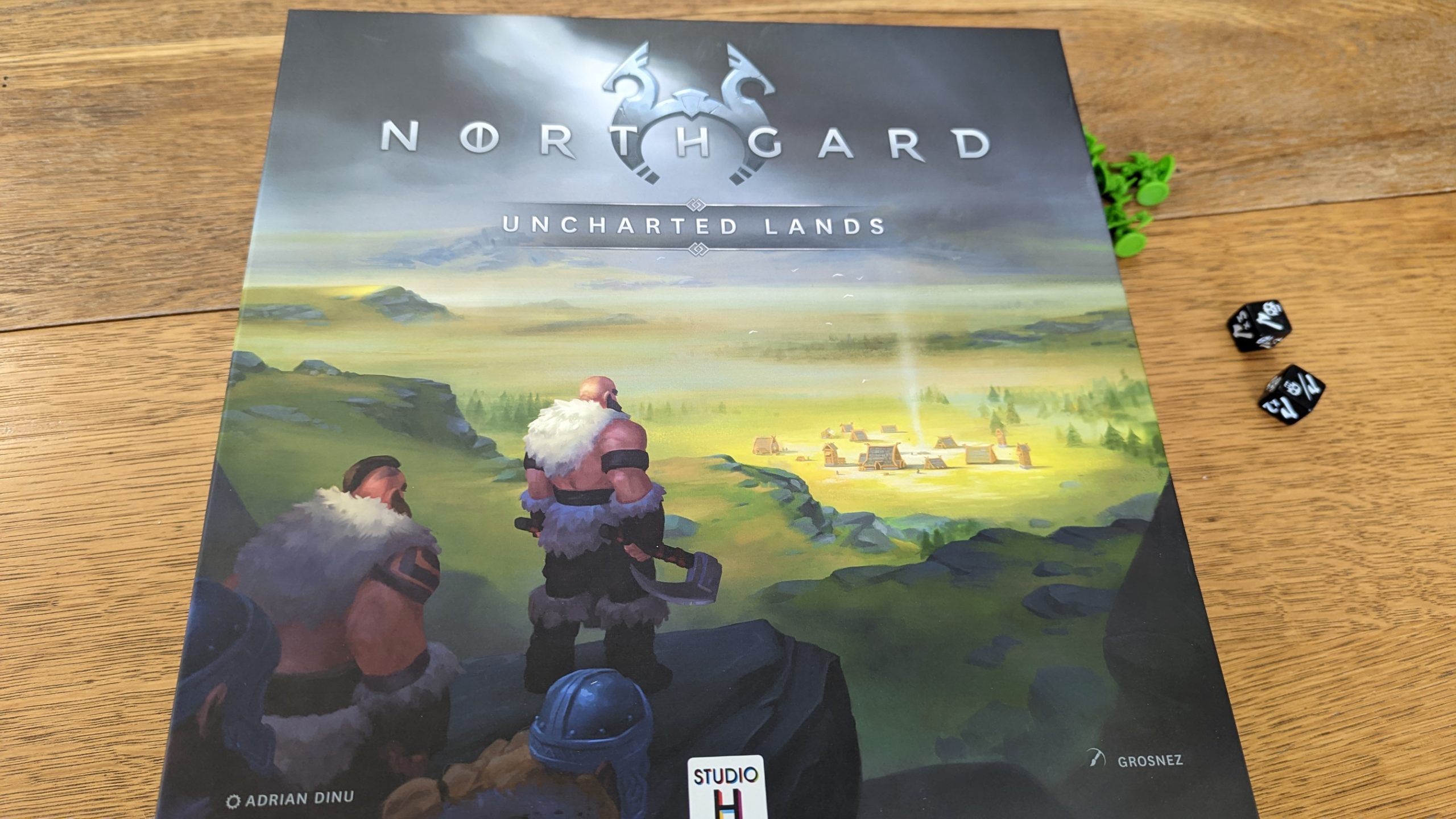 As a kid, I cut my board gaming teeth on American designs like Axis & Allies and various roll and moves, games that revel in their luck factors and random chance. As I tend more towards diceless euros nowadays, I can still appreciate the role that chance can play in a design.  While I may find the crunch more enjoyable as I’m playing a game, the stories I remember years later are when my Russian infantry held the line against the German tanks, keeping the front stable for another round, or when my opponent’s lowly cruiser successfully took on my flagship, isolated due to a grand battle the turn before. These moments of heroism, however abstracted, make for much better stories than that one time I successfully exploited Ellis’ error expanding his network in Power Grid. Which is to say, every design has to decide on its balance between pure skill and raw luck, and unfortunately, Northgard feasts much more upon the latter than the former. 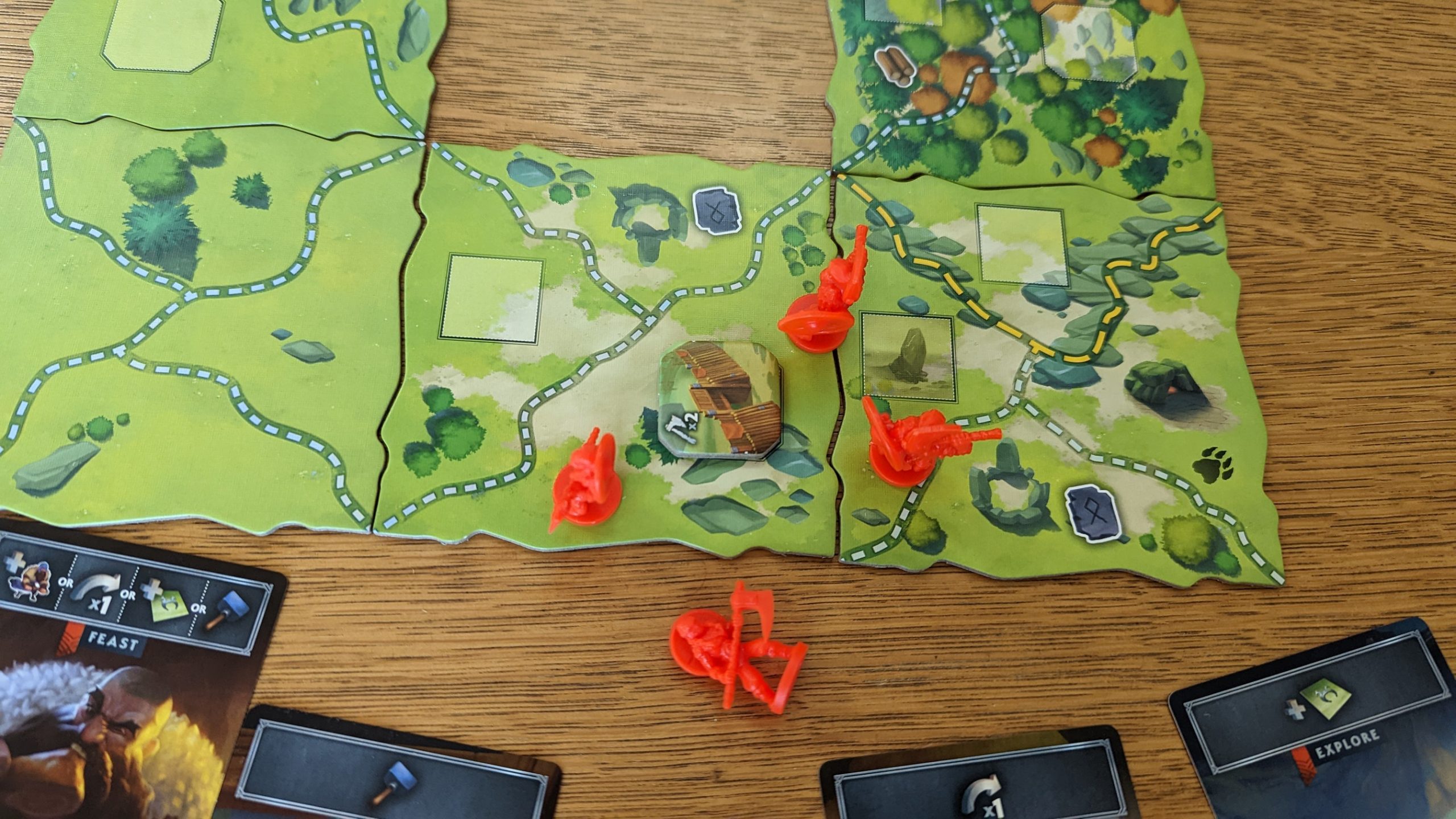 It’s not that I didn’t enjoy my time with Northgard. It has the hallmark high production value of a successful Kickstarter, which is always endearing. The core gameplay conceit is certainly interesting –- Northgard pitches itself as a streamlined 4X with deck building, and all the genre mainstays are incorporated. Players begin the game with a starter deck and a handful of Vikings in their corner of the map and grow from there. Each round starts with players drawing their hand for that round and proceeds with them playing cards from their hand to perform their corresponding actions. These are all straightforward enough: recruit lets you plop more vikings onto the map, move lets you scoot them around between regions, build lets you erect buildings at appropriate sites, feast is a wild card, and the most important, explore lets you draw map tiles in the hope of expanding into a site for the all-important large buildings which players are racing to get three of to win, along with being extremely powerful in their own right.

But this is where Northgard’s design starts rubbing me the wrong way. In most 4X games, working on a victory means investing resources in a way that leaves you otherwise vulnerable. Everyone’s dealing with a finite amount of attention, which they can only spread so thin without leaving gaps in their defenses, opportunities for the players behind them to get back in the running. However, in Northgard, because large buildings are so powerful, building for your victory also just simply strengthens your position. In all my games, players who hit enough explores in their early hands built them out into peninsulas, making it efficient for other players to try to militarily contest their new holdings, especially if they were able to buffer juicier tiles with multiple region borders. The defensive capabilities of the “fort” large building or the simple action advantage provided by the one that draws extra cards led to a snowball effect.

The prevalence of runaway leaders would be excusable, and honestly makes sense in an attempt to speed up the 4X genre, if it weren’t for the absence of player agency. The simplicity I initially took as approachability and keeping the game snappy looks totally different looking back with a critical gaze, mostly due to the weight it gives to the game’s random elements. In a good design, randomness is the game asking you to be adaptable with your strategy, how you’re going to make the most with the options given. In contrast, Northgard’s map tiles and single-user cards serve as a fashion of AI-style automata, dictating what a player will do over the course of a game. As a result of how important map draw is in long-term strategy, and how card draw literally determines what players can do on a turn-to-turn tactical level, the game stops just short of playing itself, but the feeling that your five year old nephew would be able to show just as much skill as a Northgard grandmaster is definitely there. 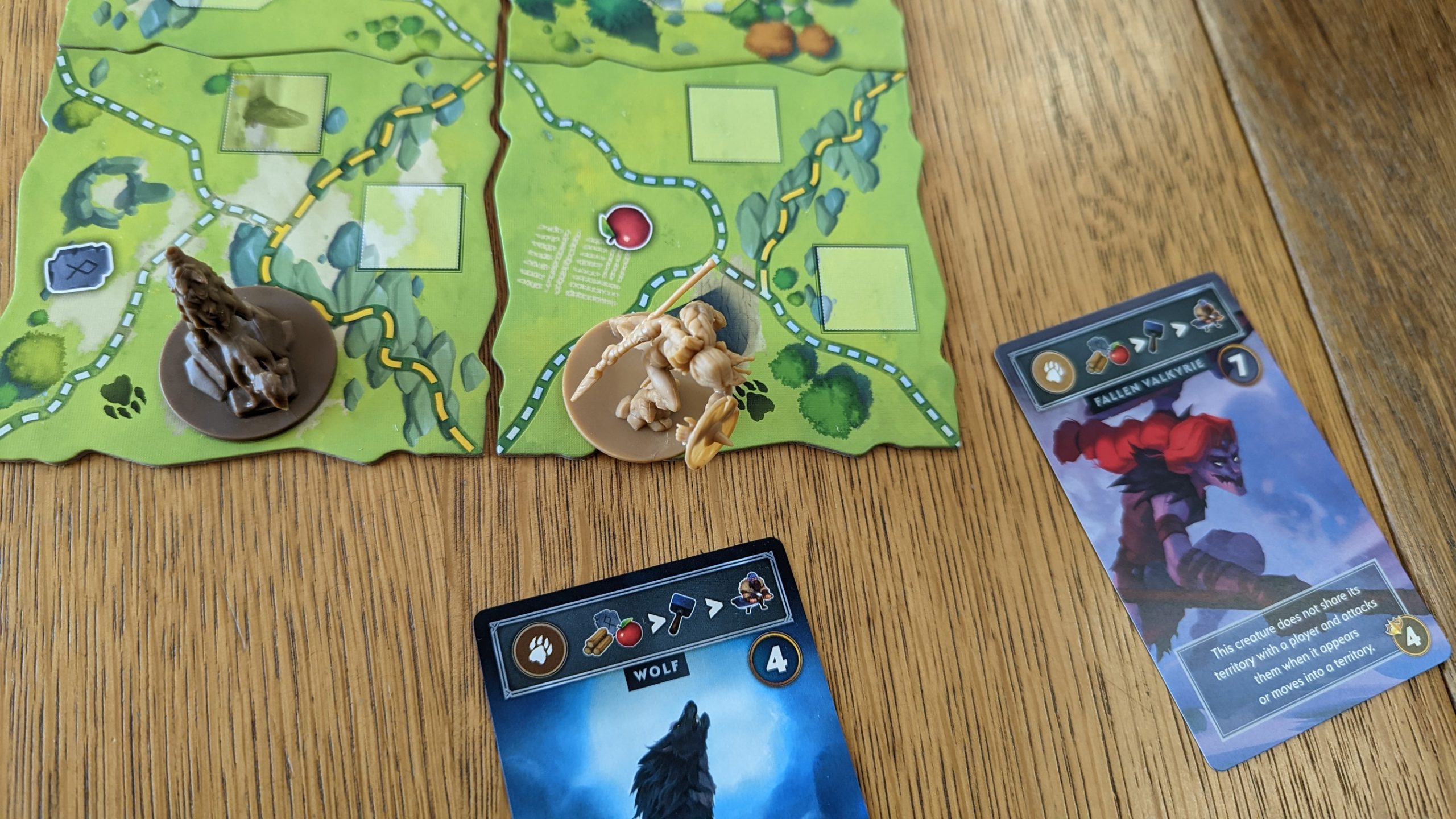 For what it’s worth, the base game comes with a creatures mini-expansion, but if it isn’t just more of the same, it actively exacerbates the base game’s problems. The chance of which creature you spawn ramps exploration’s luck factor up to 11, and the inevitability of creature combat means that players are even more incentivized  to keep their troops on the front lines of exploration, away from each others’ territory. Honestly, I’d just be happy I got some extra minis and leave it at that, or maybe give them to a friend that runs their RPGs on a map.

On a surface level, Northgard is an entertaining enough hybrid of 4X and deck building, but don't look too much deeper, 'cause this game is shallow enough that you'll have trouble getting your ankles wet.

Nick grew up reading fantasy novels and board game rules for fun, so he accepted he was a dork at an early age. When he's not busy researching the intricacies of a hobby he'll never pick up, Nick can be caught attempting to either cook an edible meal or befriend local crows.
Related Articles: Northgard: Uncharted Lands, Tabletop
Share
Tweet
Share
Submit