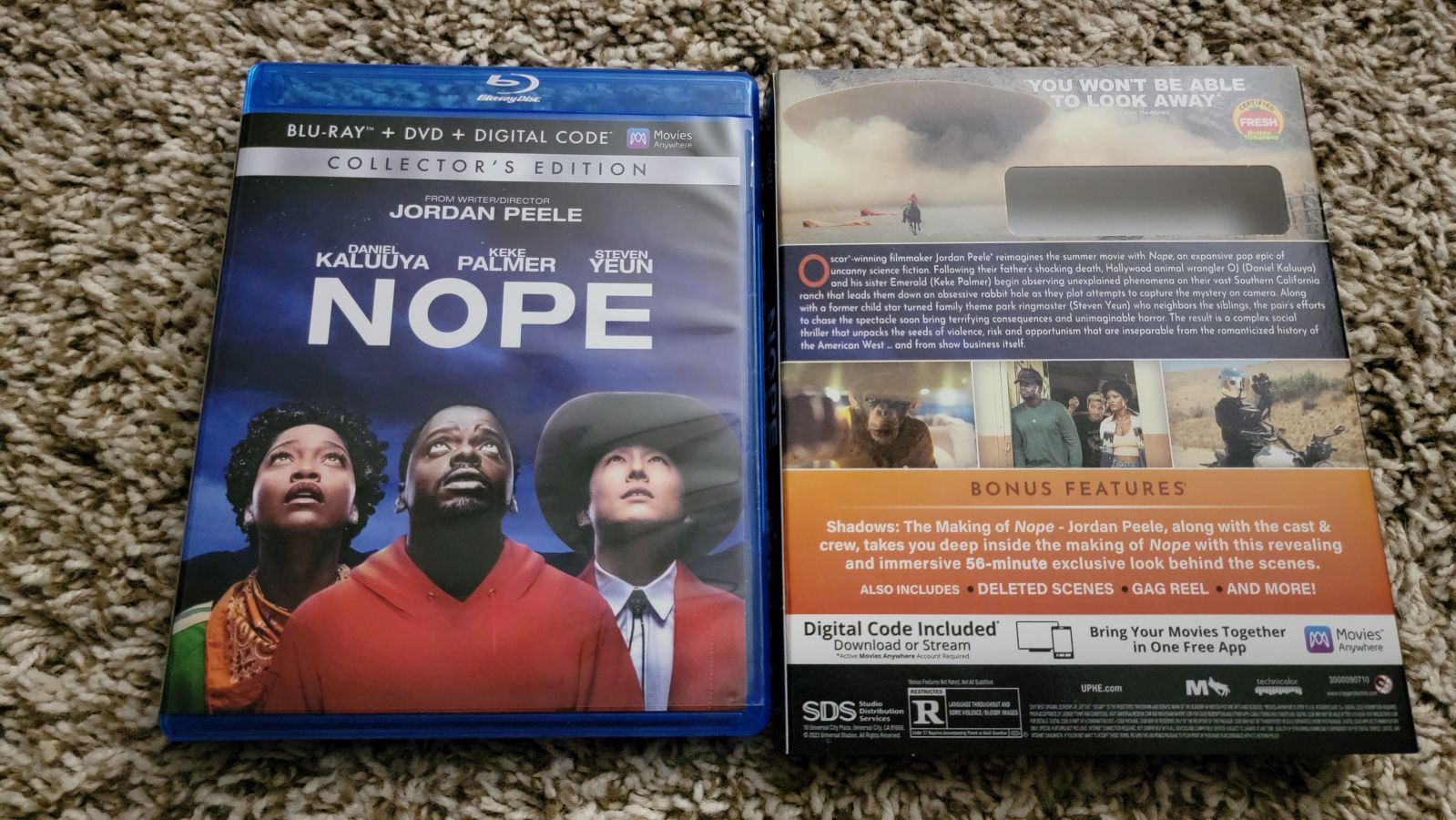 Jordan Peele has become synonymous with smart thriller films and his latest feature Nope proved able to live up the high bar set by his previous films. Beautifully shot and endlessly mysterious, Nope became a hit with audiences, grossing more than 170 million worldwide. If you missed the film in the theater, no worries, as Nope is now available on 4K, Blu-Ray, DVD, and Digital courtesy of Universal Pictures. Let’s look at the Collector’s Edition Blu-ray/DVD/Digital combo pack. 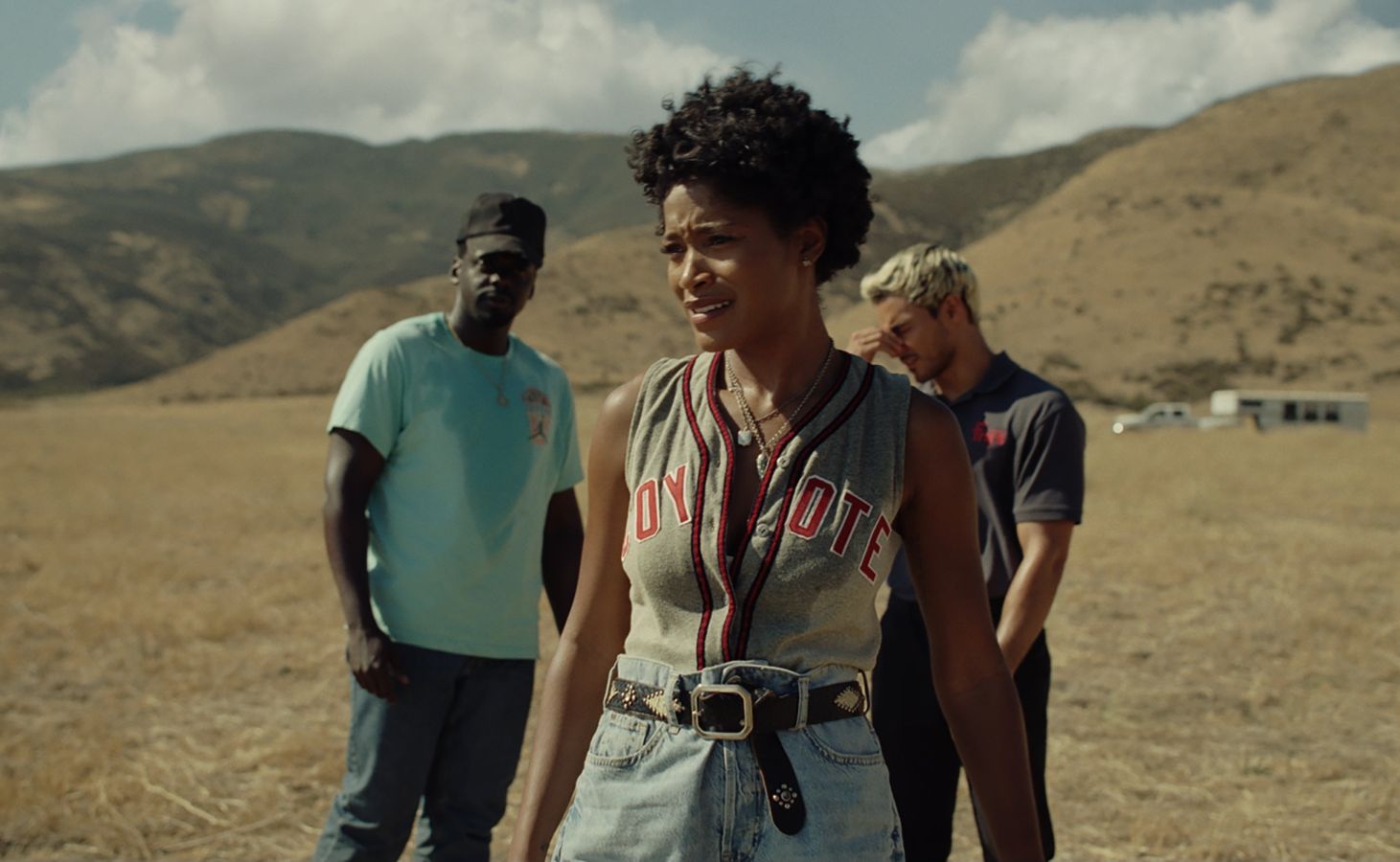 First, let’s talk about the features. Aside from the movie there are 90 minutes of never-before-seen content, including a 56-minute-long documentary called Shadows: The Making of Nope, five deleted scenes, a gag reel, and two shorter documentaries: Call Him Jean Jacket and Mystery Man of Muybridge.

The most notable item here is Shadows: The Making of Nope, the near hour-long documentary which provides a deep dive into nearly every aspect of the making of Nope by Writer/Director Jordan Peele, Stars Daniel Kaluuya, Keke Palmer, Brandon Perea, and various other members of the production team.

Shadows: Making of Nope is divided into chapters which detail nearly every aspect of production. Most notably Shadows covers how the core group of creatives were chosen, a detailed look at how the Gordy attack scene was shot and the motivation behind Gordy’s attack, how the home ranch set  and Jupiter’s Claim were created, a look at the cameras used during production, how the infamous blood rain scene was filmed, and how the film crew created the spectacle of the alien abductions.

The most interesting chapter to me was the creation and inner workings of Jupiter’s Claim. Despite being created solely for the film, the entire park was fleshed out along with the economy of how the park worked, including having an area to pan for gold, taking that gold to be weighed and exchanged for jangles, then visiting stores in the park to spend those jangles. To receive real reactions from the children on the set, the panning for gold system was unpredictable, meaning some children found gold while others didn’t. Essentially, at the park customers would begin their day by working to uncover gold, which then determines how the remainder of their day will go as gold is needed for jangles to spend.

Overall, Shadows: The Making of Nope, is a great documentary for those interested in the craft of filmmaking, particularly how sets are designed and how the individuals involved work together to create an engrossing film. 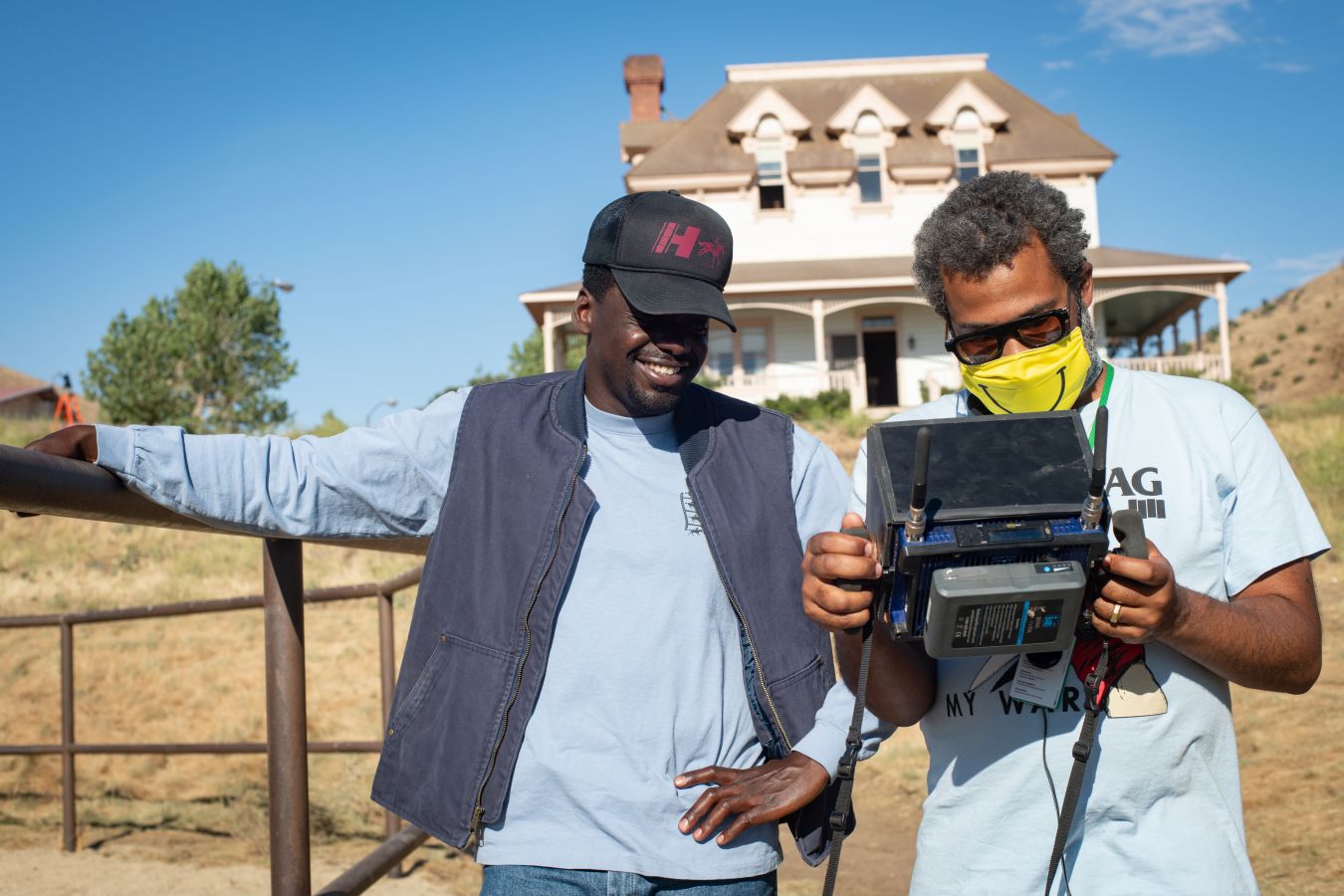 (from left) Daniel Kaluuya and writer/producer/director Jordan Peele on the set of Nope.

Deleted scenes – Five unreleased scenes totaling about 9 minutes in length. While interesting to watch, none of the scenes really would have added much substance to the movie so it is understandable why they were cut. Out of the scenes, I found The Hiker and Terry Attack the most interesting. Terry Attack is an interesting alternate take of Gordy’s attack scene, minus the CGI, so it really shows off the work that motion capture artists put in to create a scene. While The Hiker just adds another element of mystery to the beginning of the movie.

Gag Reel – A hilarious 5 minute long highlight reel of bloopers and outtakes from throughout the movie. Mainly shows line mess ups and alternate takes of scenes where the actors are improvising conversations, but still fun to watch and showcases the amazing energy of Keke Palmer on set.

Mystery Man of Muybridge – A 5 minute long look into The Horse in Motion by Eadweard Muybridge and its relation to the Haywoods and Nope. While short, this documentary is still an entertaining and informative history lesson which dives into the background of the famous horse riding clip, including the fact that the rider is unknown, while also featuring a short look into how the opening scene was conducted alongside the motion of the horse. 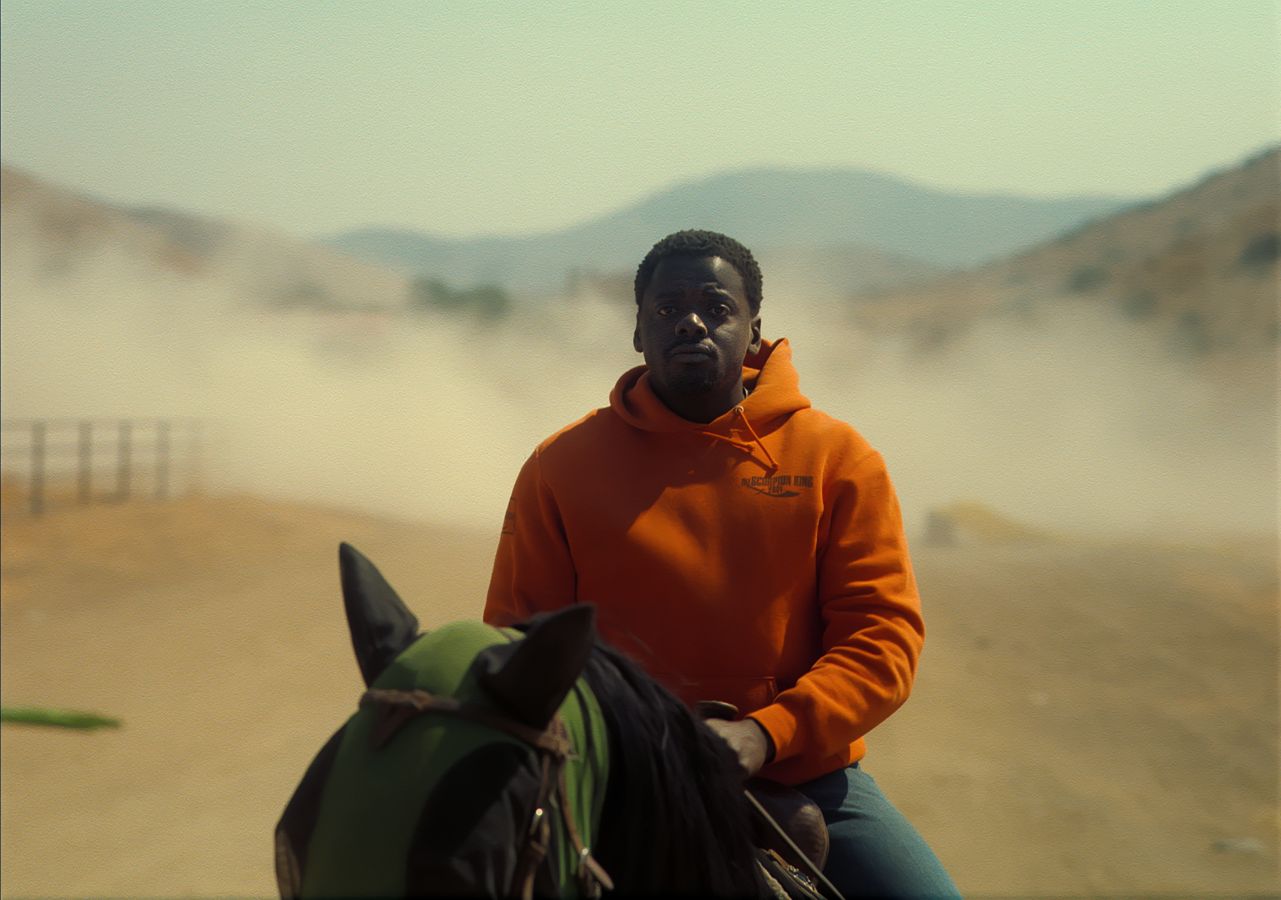 Nope is a hard movie to explain without giving the plot away, but essentially the story focuses on the Haywoods, Oj (Daniel Kaluuya) and Emerald (Keke Palmer) as they navigate the ups and downs of their horse ranch business after the unexpected death of their father. Despite the Haywoods having provided horses for use in films for decades, their business is on the decline. Former childhood star and neighbor Ricky Parker (Steven Yeun) owns a small theme park and continuously offers to purchase the Haywoods’ remaining horses, but the Haywoods have other concerns as a string of seemingly unexplainable phenomena keeps occuring in their farm. After enlisting the help of a big box store technician (Brandon Perea) and a documentary director (Michael Wincott), the team formulates a plan to solve the mysteries surrounding the bizarre occurrences on their land.

Like many of Peele’s previous films, Nope is mysterious and will no doubt leave many viewers with more questions than answers. The film leaves much up to viewer interpretation, while dangling just enough exposition to keep you hooked. That said, Nope is engaging throughout and fairly unpredictable, providing an exciting story, three excellent leads in Kaluuya, Palmer, and Perea, a fantastic mystery, and quite a few thrills. Be sure to go into the story blind and have a friend on standby to discuss the film with afterwards.

The sound design for Nope is spectacular. The eerie aesthetic throughout the film is aided by the incredible use of surround sound, pulling the viewer into the story, creating an engrossing and sometimes terrifying experience. Every subtle noise, every musical queue, works in tandem to set the scene, both terrifying and enthralling the viewer.

Especially notable are the pings of items falling from the sky, almost sounding like bullets ricocheting, creating a deadly rain of debris that seems impossible to avoid. Better still are the noises from the alien, the ominous clicking as it attempts to locate its prey and the howling as it goes in for the kill, and the sound of its victims as they endure a slow death. Finally, the film’s beautiful yet haunting score, which remains a source of tension, excitement, and hope throughout.

The blu-ray and DVD boast an aspect ratio of 2:20:1 and 1:78:1 (enhanced aspect ratio).  Nope is a dark movie, with many scenes taking place during the night, but despite this the picture remains crystal clear throughout. It is easy for details to get lost in the dark, but Nope’s impeccable picture quality ensures that this is never an issue. Every subtle movement shape, every minute detail, every quick glance of the alien, is perfectly clear. While the night shots are great, the day time shots look even better. Nope features a ton of sweeping landscape shots, the beauty of which is highlighted by gorgeous cinematography. This is a beautiful film with a beautiful blu-ray transfer that will have viewers questioning what could possibly be improved upon in a 4K release. Having seen the film in the theater and at home, I was constantly amazed by how much clearer the picture was on this home release and how many small details I caught. This is a film that many will use to showcase their home theaters.

Nope is rated R for language and some violence and bloody images and has a runtime of 2 Hours and 10 Minutes.

Nope is a fantastic horror movie featuring fleshed out characters, a great central mystery, a dynamic score which will keep viewers thrilled throughout, and crystal clear picture quality. Throw in the interesting and quite thorough bonus features and you’ve got quite a package. This blu-ray release is a testament to how good the medium can look, and will most certainly be used to showcase home theater systems for years to come.

Richard Allen is a freelance writer and contributing editor for various publications. When not writing for Gaming Trend you can find him covering theatre for Broadway World, movies and TV for Fandomize, or working on original stories. An avid retro gamer, he is overly obsessed with Dragon's Lair. Chat with him via @thricetheartist on Twitter and @richardallenwrites on Facebook and Instagram.
Related Articles: Nope
Share
Tweet
Share
Submit