One of the best things about video games is the vast amount of different genres and difficulties. You have your carefree, easy-going experiences, your intense, fast-paced games, and everything in-between. Upon seeing that Akashicforce was described as a rhythm-like puzzle game, I thought it might top out somewhere in the in-between realm, but boy was I wrong. Right away I learned that Akashicforce is an intense, rapid-fire puzzle game that won’t cut you any slack. That being said, I was unexpectedly and pleasantly surprised.

Akashicforce is a head-to-head puzzle game where the goal is to cause your opponent’s board to fill and overflow, while preventing yours from doing the same. This aspect is reminiscent of how losing in Tetris works, except you won’t be creating lines of blocks to clear the board. Colorful orbs with bugs in them (called the Anonymous) constantly fall from the top of the board and start piling up. You use the arrow keys to move your sight-like cursor as you lock onto the orbs and destroy them with the Z key. You’ll be constantly doing this at a rapid pace in order to keep yourself alive. It doesn’t matter what orbs you hit or when you hit them since they all have the same effect; all that matters is you eliminate them.

One interesting twist is that you can not only fire at the Anonymous on your board, but on the ones on your opponent’s board as well. You might be thinking, “why would I help my opponent clear their board?” Well, every Anonymous you destroy gives you energy that fills up your Method gauge next to the board, regardless of whose board it is. That means destroying Anonymous on their board is essentially stealing energy from them; at the same time, your opponent can and will do the same to you. If you’re getting annoyed at your opponent invading your board however, you can hold down the X key to activate your shield. This prevents all shots from your opponent until you let go of the button or the shield power hits zero. Don’t worry, the shield power will regenerate when not being used. 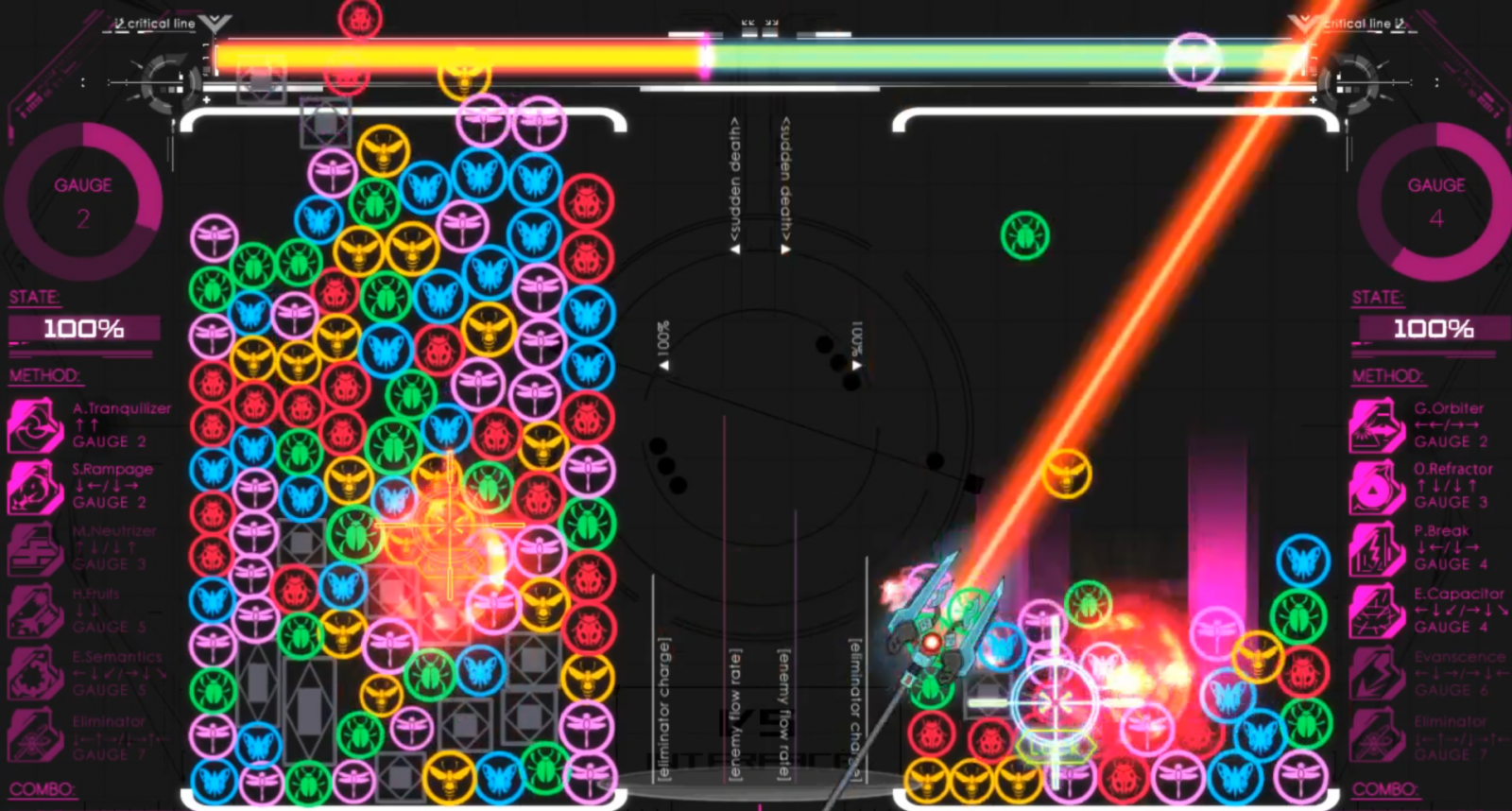 The Method gauge is used to perform Method moves, which are special abilities that can either help the player or hinder the opponent. The gauge can be filled up to level eight, and every character has six moves that their disposal. The first five moves are unique to each character, but the sixth is always Eliminator. This move triggers a crazy, incredibly fast-paced minigame where you press keys to try and hit symbols as they pass through their respective keys. For a better visual, think of it how Guitar Hero works, but with four arrow keys, three other keys, and Through the Fire and the Flames cranked up to 11. If someone can perform this section well, then hats off to you. I ended up having to mash the keys when I triggered it. It got to the point where I stopped using it.

As for other moves, they vary from transforming grey hindrance blocks into Anonymous orbs, firing a laser to clear most of your board, shooting a beam to destroy a chunk of your opponent’s orbs, and so on. There are some really useful abilities, including the Trash move that blows up a small cluster of Anonymous on your board. It only costs one gauge, and you press Z and C at the same time to activate it. Thankfully, everyone has this move at their disposal. The rest of the moves are activated by some combination of arrow keys and the C key. The moves and their activations are always present on the side of the screen, which is incredibly helpful, especially since the game gets so hectic.

The game consists of a story mode, a mission mode, a VS CPU mode, and VS local mode. The story mode follows the six Orchid girls as they venture out on a mission to wipe out a new Anonymous invasion. They decide to make a game out of it and challenge each other during the battle; this leads into the head-to-head matches between the girls. The story is told through still images of the girls on a dark background. The story itself isn’t all that interesting, especially since the story only consists of five matches (one for each of the other girls you face). You’re only allowed to play as Shaty during the story, which is a bit of a shame. What the plot lacks, the gameplay makes up for in spades. The intense puzzle action is what kept me moving forward, with the plot being like a bit of icing. The story is automatically set to medium difficulty and cannot be changed, but beating it unlocks a hard difficulty to move onto. In addition to being tougher, there’s also some interesting differences to the story in hard mode, but it’s best to see it for yourself. 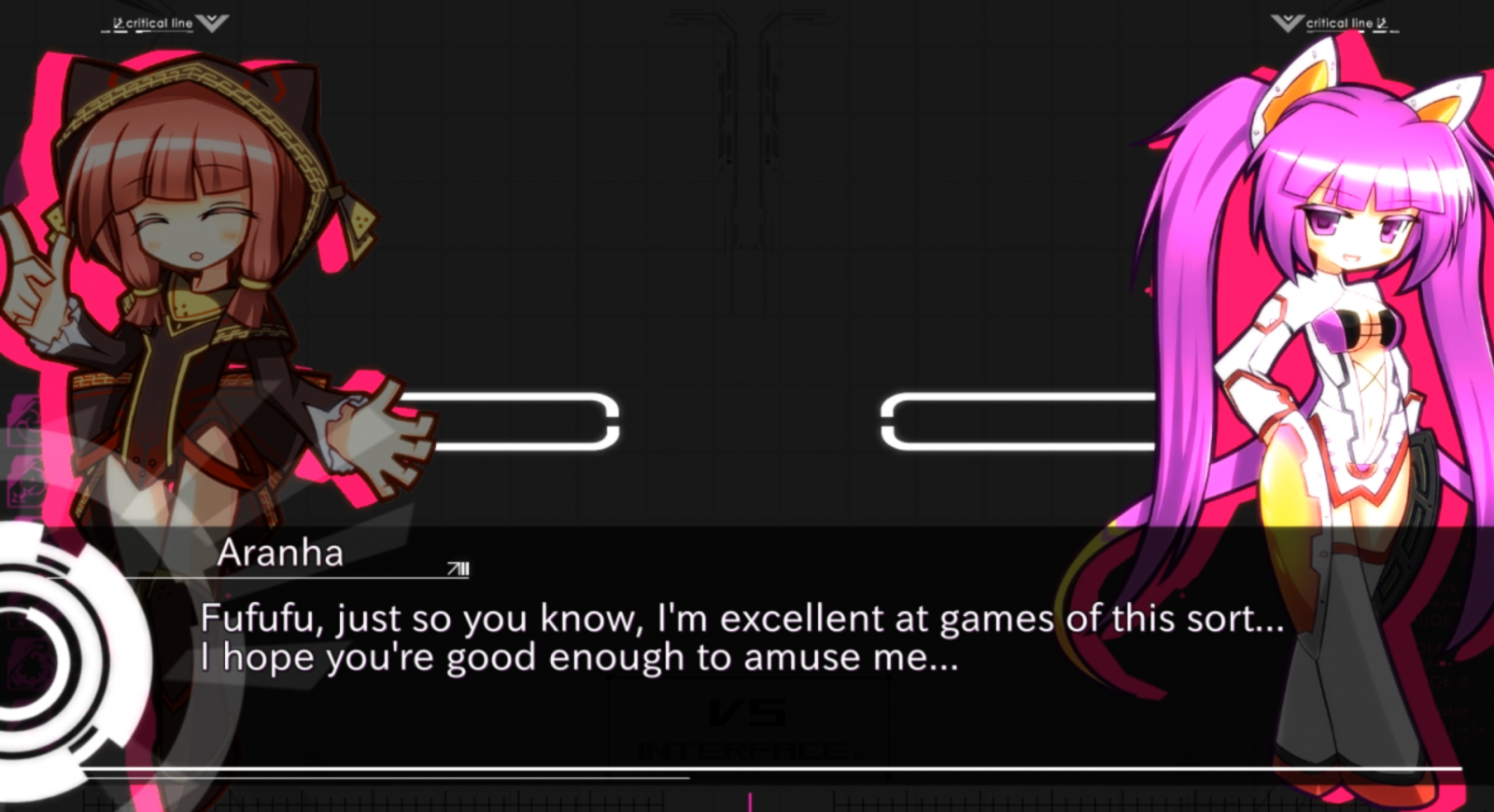 The mission mode is a series of 40 missions that each task you with completing a specific goal. It might be achieving a combo of 50, activating a set number of Method moves, or any number of other options. It’s a nice way to test out quicker, more efficient ways to get certain actions done. There are some missions where you have no enemy and instead focus on your task alone. You’ll also be put up against the other girls in head-to-head matches, but this time you can choose who you want to play as. I spent several missions playing as each of the girls, learning their moves and playstyles. Some are better for hindering the opponent, while others tend to build up their own defenses. I liked four of the six girls, so I kept swapping between them depending on the mission goal. As for the VS modes, the CPU mode lets you face off against an AI opponent, while the local mode lets you challenge your friend that’s come over to visit.

Going back to the difficulty, I do have two issues with it: there’s no tutorial to teach you the game and some sections are brutal. I don’t expect every game to hold my hand, but I think some sort of tutorial or explanation should be available in every game. For example, after the beginning dialogue of the story, you are just thrown into the game–no explanation of the rules, no practice, nothing. There’s a quick glimpse of rules placed as the background for less than 30 seconds, but even the little bit you see doesn’t give you much. This means you have to look up the controls in the settings and figure out how to play on your own. Hands-on learning can be wonderful, but a helpful nudge and some advice can make all the difference. As for the brutal sections, it feels appropriate considering how this game plays, but there is one specific moment in hard mode that comes to mind. The second half of one specific match always annihilates me within 20 seconds no matter what I do or how well I was set up beforehand. I’m hoping that it’s just an issue with what I’m doing, but I feel that it’s important to point out. So far, I’ve had to take a break due to this one match.

The combination of the fast-paced puzzle gameplay, the tension that arises, and the fantastical moves make this game an absolute joy to play. The visuals are colorful and have an anime look to them, which is charming to me. The sound design and music amps it up even more. You have the relaxed music during the dialogue sections, but once a match starts, the music speeds up and gets your blood pumping. The one issue with all of this is that sometimes the game will slow down drastically due to a plethora of things happening on the screen at once. It doesn’t happen often, but in some of the more hardcore levels, be prepared for this potential issue. That being said, even with the relentless puzzle gameplay and almost brutal challenge, I’ve had a blast playing Akashicforce. If you’re looking for a calm puzzle game, steer clear; if you want to test your skills and typing speed, then come with me as we assist the Orchid girls.

Akashicforce is an incredibly challenging puzzle game that feels rewarding when you succeed. The bumping music, fantastical visuals, and fast-paced action keep you engaged. A tutorial would've helped the start of the game immensely.

Codi loves to play video games and watch movies. He will watch almost any kind of movie just to experience them. His ideas take inspiration from the shows and movies he watches, and games he plays. He also loves a good pun.
Related Articles: Akashicforce
Share
Tweet
Share
Submit