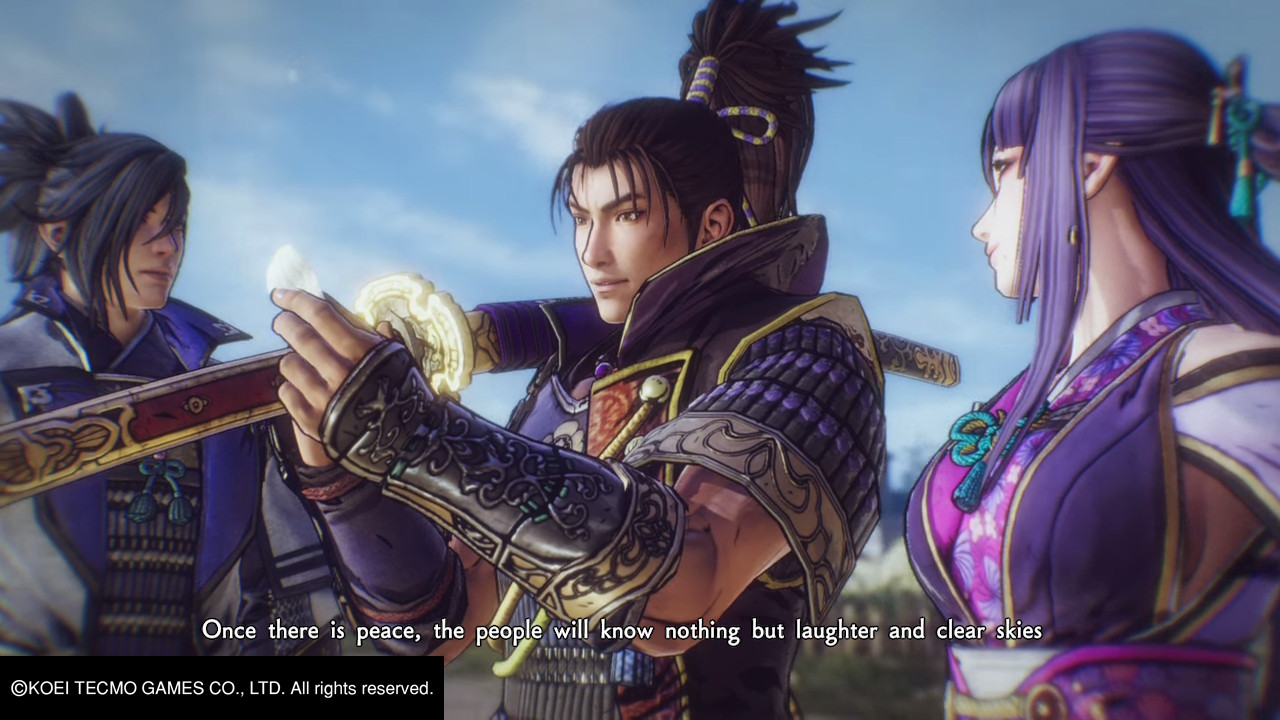 It’s hard to believe most of our favorite series of the sixth generation of consoles are decades old at this point. It feels like 2000 was yesterday, but our games have gotten much more technologically advanced since then. It’s only fair that newer entries act as reboots for newer fans, and it’s a trend that’s going to stay, for better or for worse. Luckily, Samurai Warriors 5 falls into the former, with a new cast of characters and revamped hack-and-slash gameplay that hits all the right grooves. 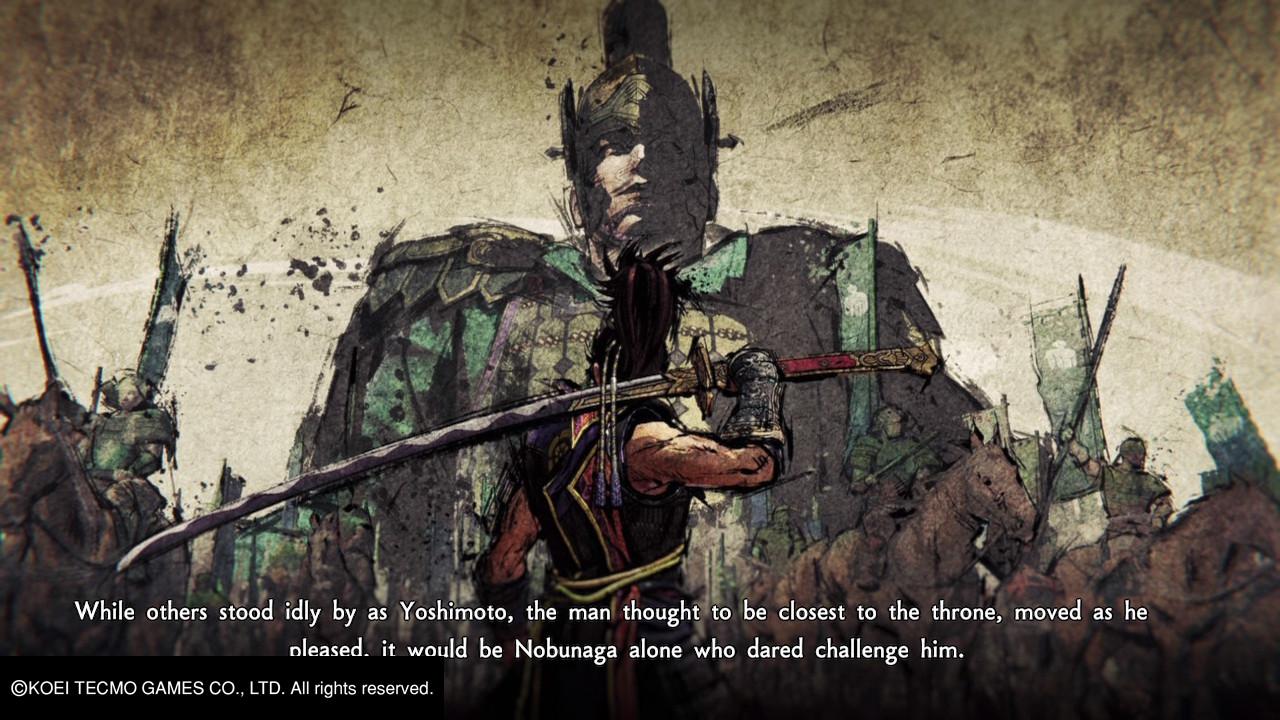 The only mainline Samurai Warriors game I played at length was the third, and while each successive title focused on expanding the character roster and scenario count, Samurai Warriors 5 goes the opposite direction. No longer focusing on faction-based or multiple character story modes, you instead get a campaign featuring a young Oda Nobunaga as he plans on unifying Japan under his rule. Playing through the main story mode will also get you a campaign for Mitsuhide Akechi later in the game.

I appreciated the change in narrative since this means the game can focus on crafting a meaningful story instead of a fractured one. Playing as a younger Nobunaga means that you can also appreciate the leader’s youthful flaws as he loses as many battles as he wins, rather than the invincible strategist he was made to be later in history. It’s a nice change of pace that’s catered towards newer players. Cutscenes are divided into pre-rendered cinematics and “talking heads” cutscenes, the latter of which are a bit repetitive at times, but get all the information down quite nicely. 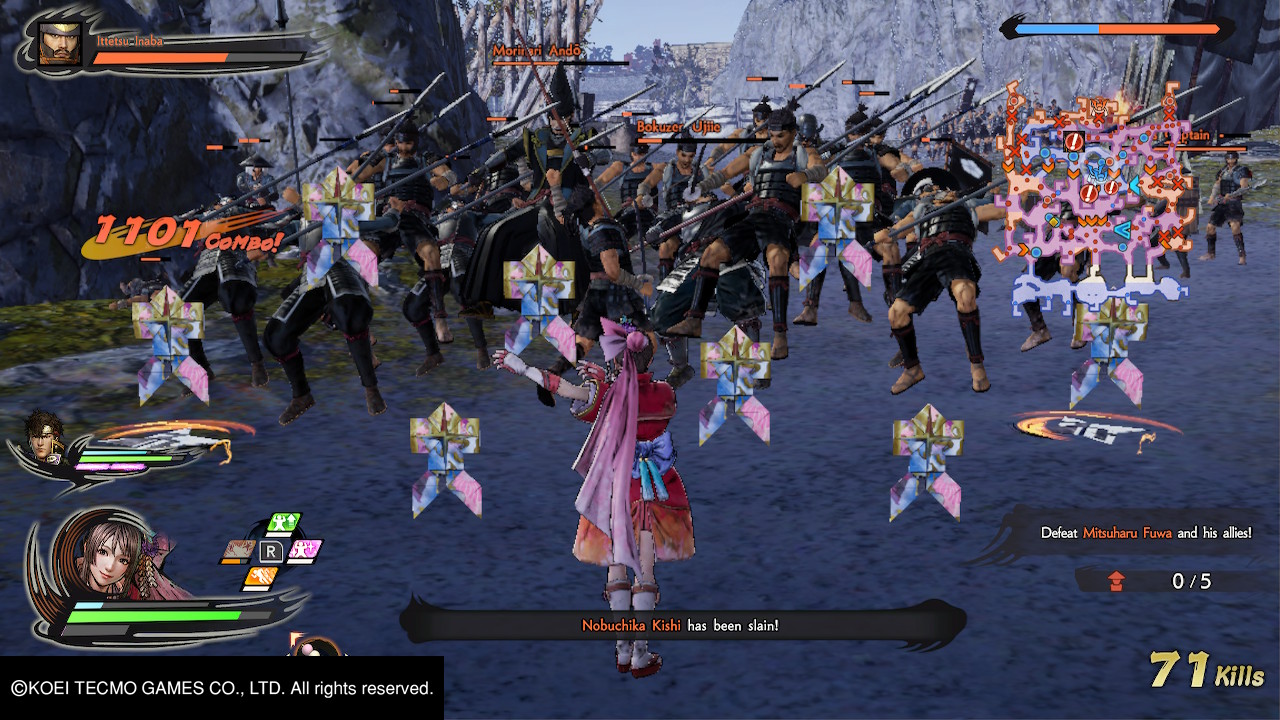 The reason I say this is because the roster is pared down considerably. Gone are the dozens of officers you’ll select; now you get 27 unique characters plus 10 supporting playable characters who don’t have distinct attacks. As this is a reboot, the game focuses on the first game’s cast as well as the new characters in this installment, with the second, third, and fourth games only getting a handful of different characters. Existing characters get a younger redesign as well (though you can play as older versions of Nobunaga and Akechi later.) What’s more baffling is the fact that we don’t get Yukimura Sanada this time around (though he did get a clan-based spinoff in Spirit of Sanada, but still!) but hey; it’s Nobunaga’s world and we’re just living in it.

While the slimmer roster might discourage longtime fans, the new characters are all fun to control. You’ve got a range from Nobunaga’s pseudo-adopted child Mitsuki, who plays like Ryu Hayabusa back when he was in Warriors Orochi 3 to Kazuuji Nakamura, who uses a projectile-based weapon that’s fun to switch up with different bullets. You also have the black samurai Yasuke, which is a surprisingly cool addition to the roster; put simply, it’s an entertaining slate of additions that could only happen in a rebooted installment. 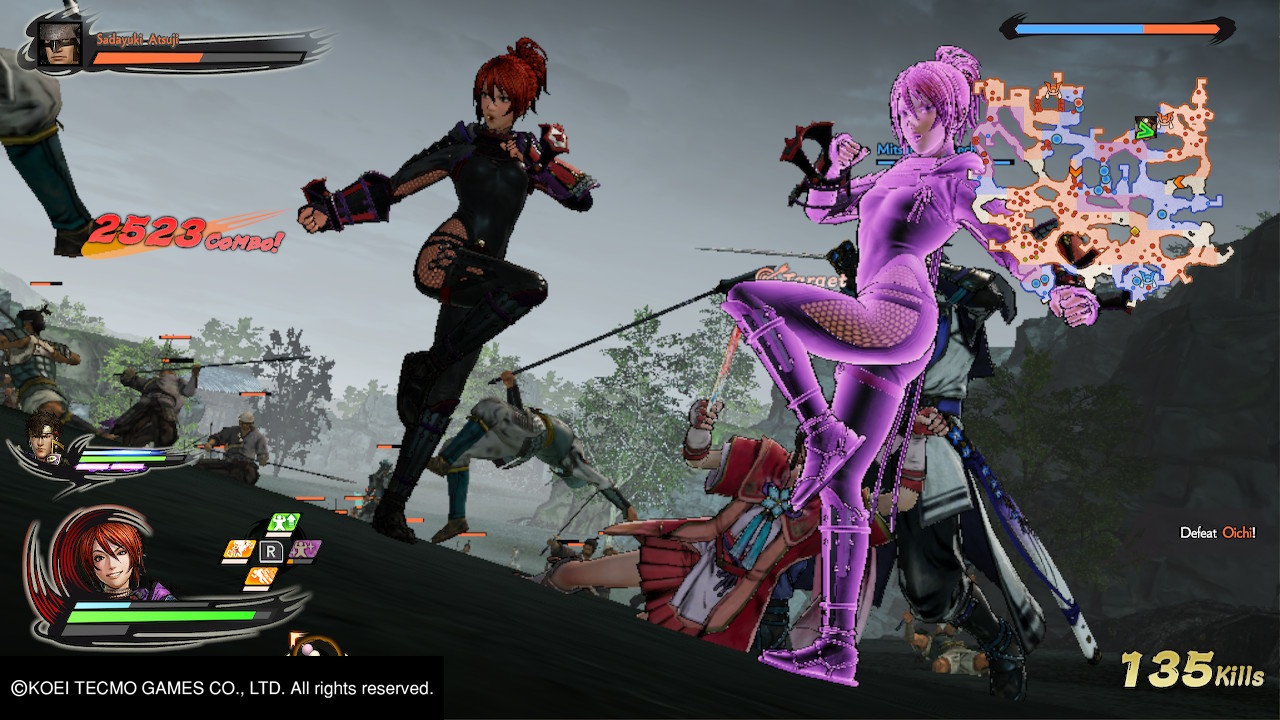 Gameplay is fundamentally the same as all Warriors games, where you control a character as you try to complete the main objective, usually to defeat the main enemy commander of the stage. There are some bonus objectives you can participate in should you activate them, like defeating a certain amount of enemies within a time limit. You have two main attack buttons plus a powerful Musou attack when your Musou gauge is maxed out. Taking cues from recent Warriors games and spin-offs, you also have unique attacks for the 27 main characters that, while basically another button press, are flashy and give the character selection a lot of depth. You also have ultimate skills that you can assign by pressing R and a face button, which will give your character a temporary status boost or even a powerful attack that can disarm an enemy officer preparing a Musou attack of themselves.

This time around, you can control two officers in single-player mode, where you can split them up and direct the other one to travel to another location on the map (if they can access it, that is). While it’s a relatively minor change, instant character switching makes Samurai Warriors 5 much more enjoyable and manageable when trying to escort NPC officers to an escape point. Because you can have another character on the other side of the map, you can focus on one objective while quickly switching to another character once you’re done. This also has a positive side effect with combos (which can be strung together as long as you keep hitting enemies), so if you’re in an area that’s cleared out, you can easily go to your other character and whack some mooks while the other character finds more enemies to mow down. It’s a wonderful change of pace that revitalizes the lulls in gameplay earlier Warriors titles had. 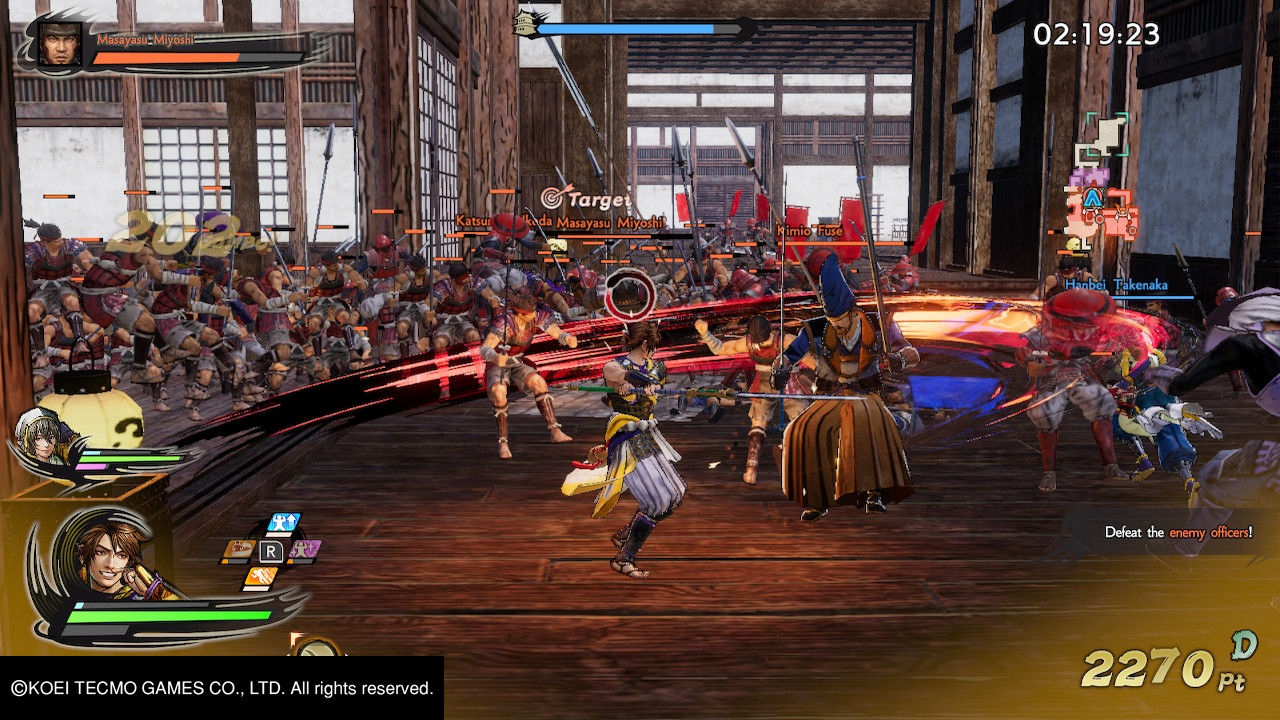 I was surprised in how I had to change my tactics as well; out of the default difficulties, normal is the one that offers the most gratification while also putting up a decent challenge. For those used to the series, hard is probably a better starting point, where enemies won’t let up but still offers a fair challenge (as in, they won’t kill you in one hit, but you still need to make sure you’re using the mechanics properly). There are quite a few ways to get yourself out of enemy attacks this time around, and with a wealth of different techniques, it’s a much better time than getting juggled around during harder scenarios.

Aside from the story mode, there are tons of things to do outside of battle. Samurai Warriors 5 has a great progression system for officers AND weapons (where you have to level up character proficiencies with different weapons as well as general stats), and there’s a little skill tree where you can upgrade a character through skill points. Everything else can be upgraded as well with a Blacksmith upgrading weapons and a Shop offering different items you can use within the story mode. You also can purchase horses and upgrade them in the stable; quite simply, you can get lost within these upgrade systems to find the best build for your favorite officer. 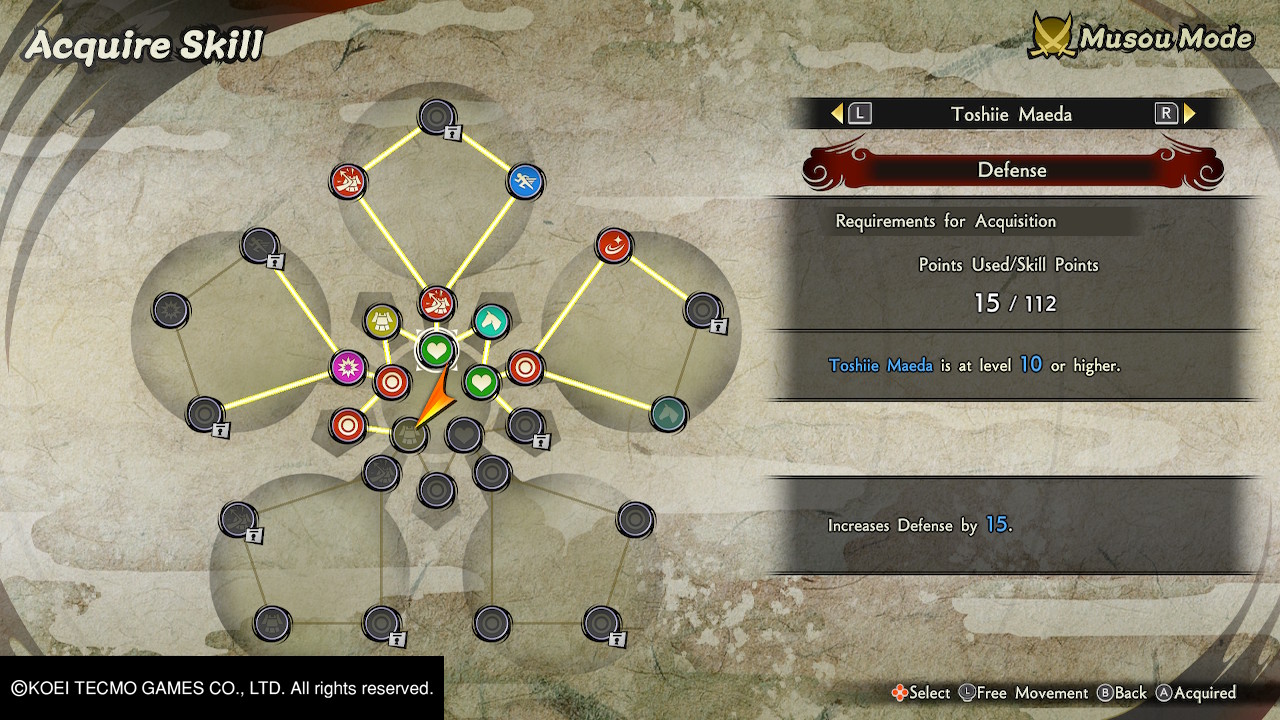 This progression system carries over to the Citadel mode, which I’m a bit mixed on honestly. This mode is different from the Musou story and free story mode, which offers different bite-sized scenarios that feel more at home for those who missed the character-based campaigns of previous games. While the main story stages take around 15-20 minutes to complete on average, these other stages are 5-minute skirmishes with straightforward “defend the bases” fights. Here, you’re graded on score based on how many enemies you destroy, with more powerful enemies netting more points. Random officers will pop up and you’ll have to complete required and optional objectives, much like the regular story mode.

It’s here where the game feels procedurally generated, as while there is a historical context to these stages thanks to the text blurbs that preface each stage, it seems enemies just plop into existence out of nowhere. Whereas the story mode is a finely crafted experience with meaningful interactions and boss battles, here it’s akin to a sloppily made free mode stage.

It doesn’t help that the AI here is comparatively brain-dead to the story mode; in story mode, even if you didn’t assign your other character to a location, they would normally just go to the nearest objective or enemy officer. Here, they barely move and you have to constantly instruct them to go anywhere that’s not the base. Some stages WILL have them move around, but it’s not a great look when I have to keep directing orders with tighter time limits. I have to do what I normally do in 20 minutes within 5, and it’s a bit too restrictive to explore the stage for bonus objectives. 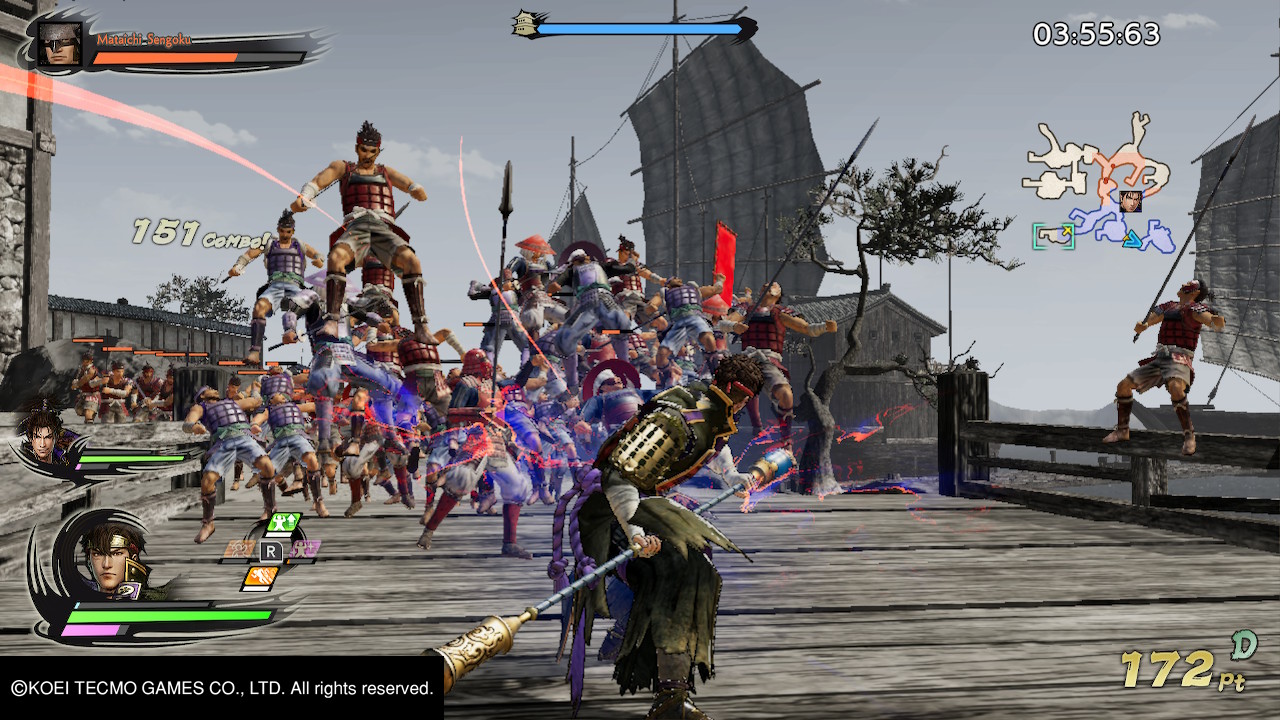 To counteract the lack of cutscenes in Citadel Mode, there are Hermit Retreat cutscenes that you can experience when a team of two characters builds enough friendship with each other. They’re basically the standard talking heads cutscenes in the main story mode, but at least they’re lighthearted and flesh out the characters more. 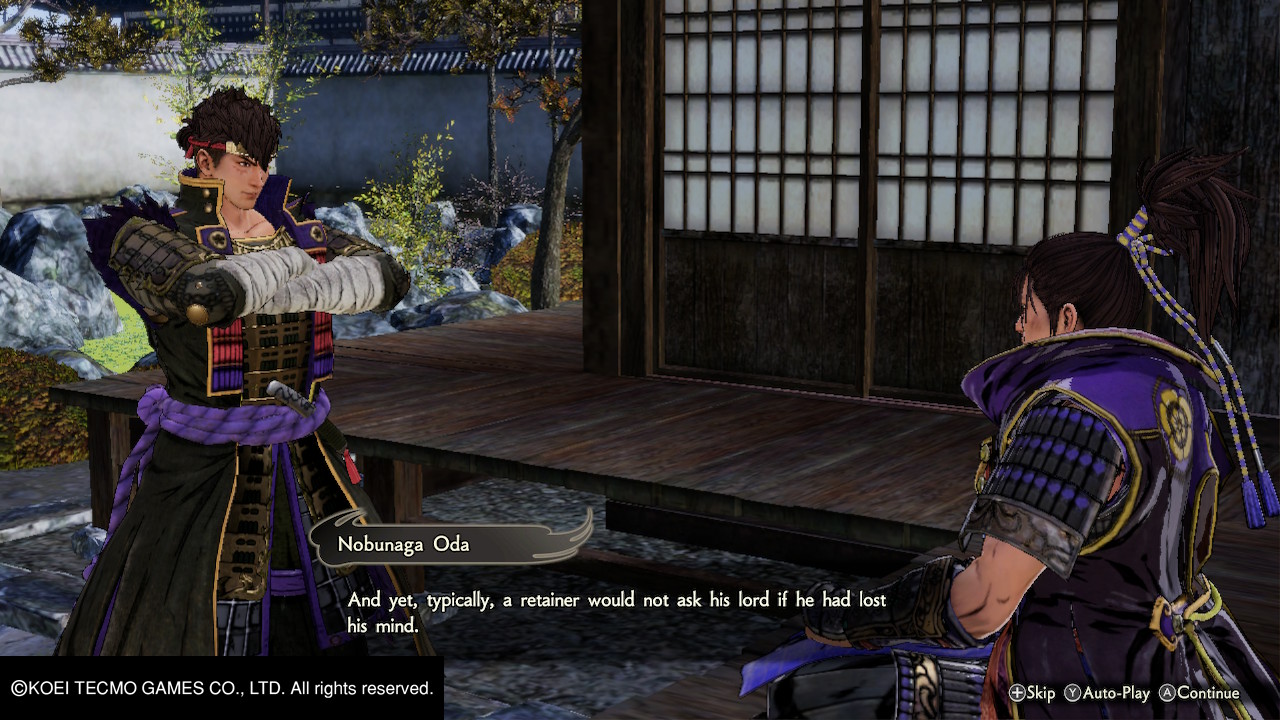 In terms of presentation, I’m surprised that the Switch can run these types of games without crashing. The art style has some stylistic charm with its character models (and with it being a reboot, perhaps we’ll see more of it in future installments), and in docked mode the game runs great. As I played a majority of my runthrough in handheld mode, I noticed a few more framerate dips than Warriors Orochi 4 or Hyrule Warriors, but nothing too dealbreaking. That said, I would definitely not recommend you playing this game undocked if you opt to play single console co-op; the screen real estate isn’t conducive to that small a screen, and would run like molasses. The soundtrack is also a bit different from the hard-rocking sounds of previous games, using a more traditional action score. Again, not a major touch, but a nice one nonetheless.

Samurai Warriors 5 is a great way for newcomers to jump into the long-running series. With a redesigned cast and amazing new gameplay mechanics, this marks a new era for the franchise.

Elisha Deogracias is an aspiring accountant by day, freelance writer by night. Before writing for Gaming Trend, he had a small gig on the now defunct Examiner. When not being a third wheel with his best friends on dates or yearning for some closure on Pushing Daisies, he's busy catching up on shonen manga and wacky rhythm games. Mains R.O.B. in Smash. Still doesn't know if he's a kid or a squid.
Related Articles: Samurai Warriors 5
Share
Tweet
Share
Submit