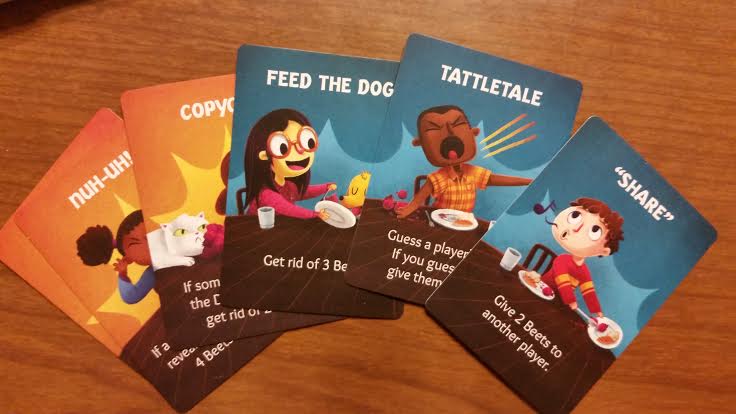 Beets. They’re the deep reddish-purple root vegetable that holds about as much esteem to the palate as brussel sprouts or lima beans. It might seem perplexing then that Stone Blade Entertainment, whose previous offerings include the far more grown up Ascension, would choose the beet as the star of its card game, Bad Beets. While beets may not seem like an ideal gaming theme, at least you aren’t forced to eat them should you lose the game.

Bad Beets is a bluffing game where the player’s goal is to get rid of all their beets before anyone else. Luckily, there’s plenty of options to rid yourself of the repugnant roots. Players are dealt one card. The starting player then draws another and decides between the two on which action to take. Cards allow beets to be disposed of by sharing them with other players, feeding them to the dog, or tattling on other players. Players always have the option to “eat” one beet regardless of the cards held, but just as in real life, why eat them when you can pass them along to other people?

Just because a player holds the “share” card, it does not have to be played. The player can choose any of the actions mentioned. Want to rid yourself of three beets but don’t hold the “feed the dog” card? Call it anyway. It’s up to the other players to call your bluff. If you get caught, your action is nullified, and the tattler gets to lose a beet instead. A truthful player forces the tattler to pick up a beet while the goody-two-shoes gets to play their card as normal. New cards are only drawn when old ones have been revealed. Therefore, it’s possible to hold on to the same card for many rounds unless a bluff has been called.

Once an action is taken, the card that was not used is passed to the next player, and the decision making continues. After a round, there’s a reasonable chance to be able to guess the card that’s in someone’s hand. This is where the game’s most powerful card comes into play. The Tattletale card is a true risk-reward. A correct guess passes four of your beats, half the game’s starting total, to the other player. Beware, though, because a special “nuh-uh” card passes four beets back to you instead. With a starting pile of eight beets, the game is over quicker than it takes to explain it.

The card passing mechanic is similar to highly overrated Love Letter, but at least I felt like I was trying to achieve something while playing. Still, the theme is completely absurd which is probably the point since I’m not the target audience. There’s little doubt that it, coupled with the cartoonish art and cool beet tokens, are targeting kids, but playthroughs with several 8 to 11 year olds showed that the theme is hardly a hit. When the target audience’s best response is a lukewarm “okay”, there’s a problem. Even cardstock vegetables fail to get kids interested. This results in a game where the novelty wears off quickly. In a crowded filler game market, that’s a death blow.

On one hand, It’s tough to dislike the game. It’s harmless fun and plays so quickly that it works great as a filler. After several playthroughs, the longest game was a mere seven minutes. On the other hand, it’s tough to say it’s worth the money either. The unique theme may be humourous early but lacks any long term appeal. As that lessens, so will the replayability. Sure, the game is cute, but cute is the gaming equivalent of a nice personality in dating. Even at just $15, it’s hard to image this game being a good buy.

Bad Beets is a simple card game that plays quick and will please those that like bluffing games. The peculiar theme and lack of long term appeal will keep this away from many collections.