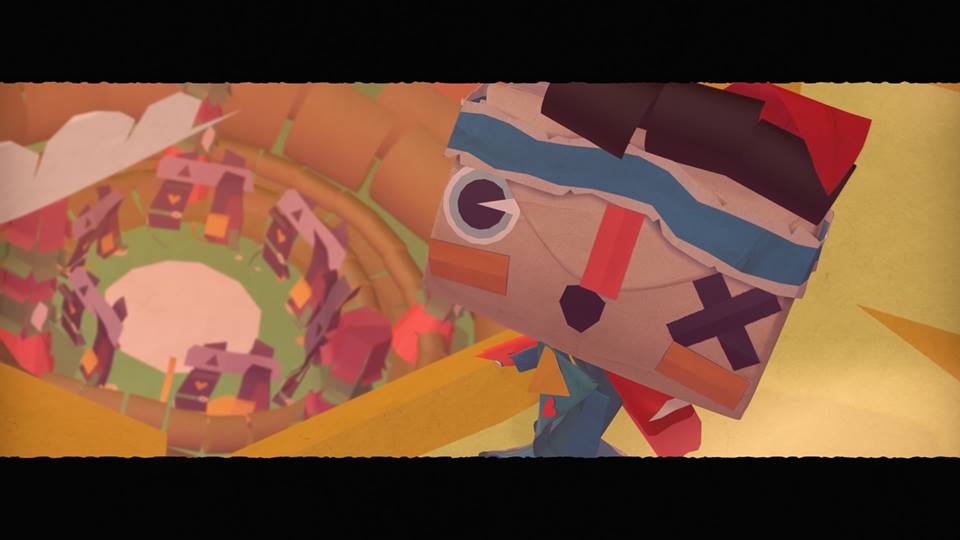 Just as it did on Vita, the genius behind Tearaway’s design philosophy shines on PlayStation 4.

Tearaway: Unfolded for the PS4 isn’t a remaster or port, it’s a game remade from the ground up for a new platform. Tearaway’s handheld roots are pretty much unnoticeable on the console, as everything has been reshaped or repurposed to take advantage of the PS4’s capabilities, giving new players new means to experience Media Molecule’s delightful tale, as well as providing returning fans a reason to revisit its paper-craft world.

Unfolded is full of new worlds, mechanics, and puzzles for you to experience, but the overall premise is pretty much unchanged from the original game. Within the world of Tearaway, players control a “Messenger,” a little person made of an envelope with a message for the player inside. The Messenger’s goal is to cross from their world into yours to deliver this message, and it’s up to you to help them through it by manipulating the paper-craft world in which they reside. This means that the player, referred to as “You,” is a character in the game themselves.

While the Messenger handles traversing the world of Tearaway, it’s up to players to use their own separate abilities to help them on their way. This means doing things like creating gusts of wind by swiping on the DualShock 4’s touchpad to blow platforms into proper positioning, shining the controller’s light bar into the world to illuminate dark areas and hypnotize enemies, and launch objects to places the Messenger can’t reach using the motion sensor.

Tearaway is a collaborative effort between you and the Messenger. Platforming and puzzle-solving can be challenging as you coordinate both your own abilities and your little friend’s, but Tearaway’s design is smart, demanding, and a lot of fun.

As nearly all of the original game’s features from the Vita have either been adapted or replaced, much of Unfolded’s puzzles and environments are restructured or brand new. Tearaway was a game made for a specific piece of hardware, and that means that, despite the same premise and some returning areas, Unfolded is practically a new game on PS4, as that principle is still at the core of the console version. Utilizing the DualShock 4 brings new life to Tearaway, as there’s enough new content to make the game worthwhile to those who played it on Vita, and it still manages to capture that same sense of wonder that the original did on a bigger screen.

While much of Tearaway’s design has changed to accommodate the PlayStation 4, some of the Vita’s features that wouldn’t work on the console have been made available through second screen functionality. Using either the PlayStation App on iOS and Android or PS4 Link on your Vita, players can upload pictures that will appear in the world, use the touch screen to cut out designs that can be used in-game for accessories to personalize your Messenger, and help to complete sidequests and challenges.

Whether you’re on a phone, tablet, or your Vita, the second screen helps maintain a lot of the core Tearaway experience that wouldn’t be possible with just a DualShock 4.

It’s good that this second screen option exists, because the alternative is using the touchpad on the DualShock 4 to try and create designs. The latter option is serviceable, but is fairly limiting compared to using the companion app. That these features were still salvageable on PlayStation 4 is great, and it can make Tearaway a cooperative game if you want to have a second player along for the ride, but it is unfortunate that some of Tearaway’s most notable features have to be trapped on a separate device you might not have.

But even as a workaround, the second screen functionality helps to preserve the creative drive that Tearaway instills in the player, and the world of Unfolded is full of opportunities for you to create and customize it as you see fit.

Whether you’ve played Media Molecule’s paper-craft masterpiece before on Vita, or are new to the endearing and innovative world of Tearaway, Unfolded is a great way to experience the game on PlayStation 4. Not many games inspire the same sense of creativity and imagination that Tearaway does while still designing a cohesive and inventive experience that really takes advantage of the hardware it’s been made for.

Tearaway: Unfolded is full of the same enchanting charm and clever design found in the original, and the PlayStation 4 gives it a new stage to captivate both returning and new audiences alike.