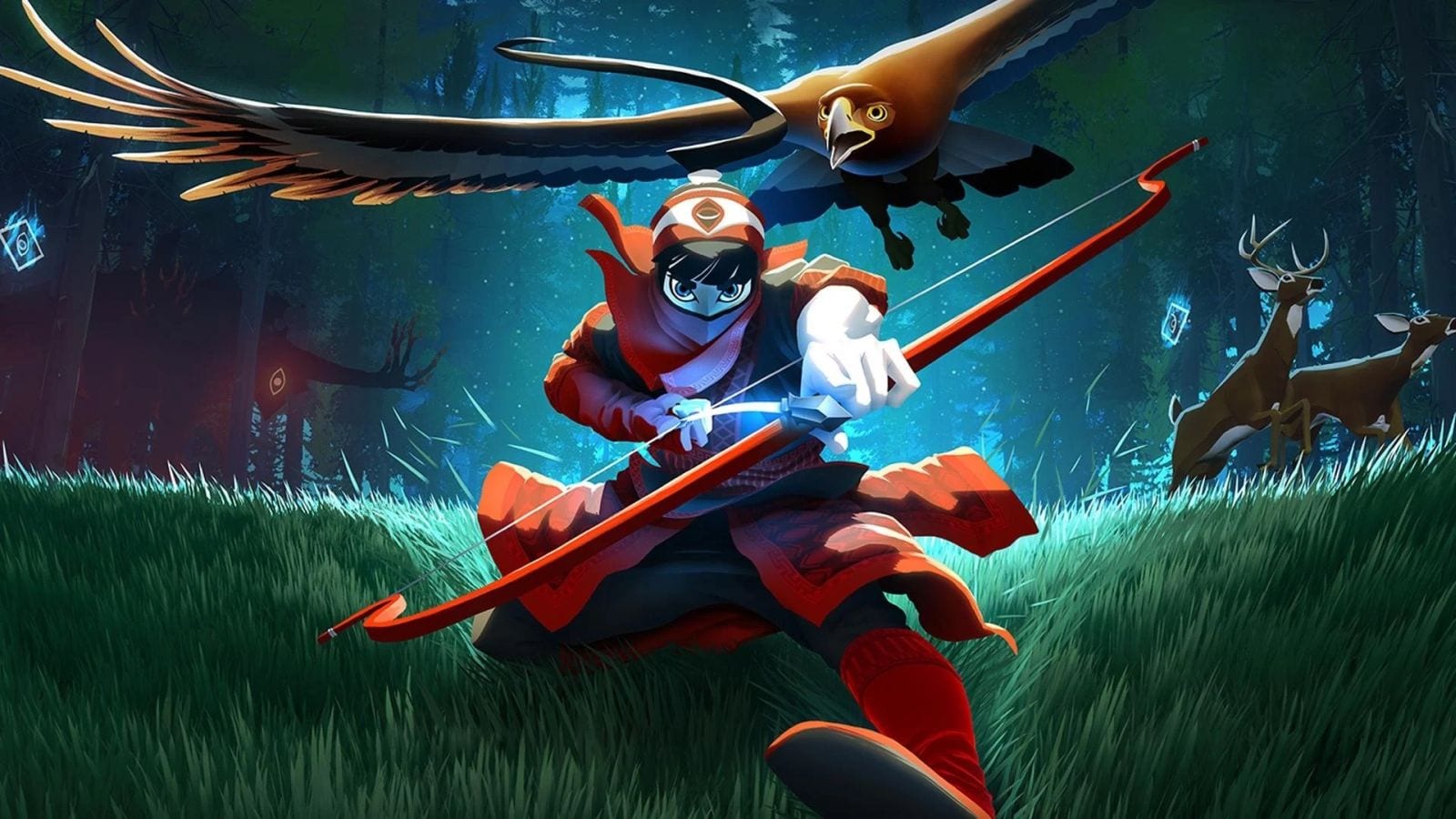 There are two classes of people; those who believe games are art, and those who are wrong. If you need some examples, there are numerous across all genres, with several standouts like Flower, Shadow of the Colossus, Ico, Firewatch, Gone Home, Journey, and so many more. Developer Giant Squid, maker of another example ABZÛ (our review), have returned with another gripping adventure. Could it add another name to the list?

The Pathless casts you as the Hunter, an archer who has arrived on a mysterious island with the goal of freeing it from an evil curse. This curse has been laid upon the land by The Godslayer — a malevolent warrior set on destroying the guardians of the lands known as the Tall Ones. By corrupting them, he has successfully taken down the Eagle Mother which disrupts the sanctity and serenity of the realm. You, the unnamed and (mostly) silent protagonist, must team up with a young eagle to free these Tall Ones from their corruption, thus releasing the world from darkness.

The young eagle you rescue at the beginning of the game starts off being able to assist our heroine by allowing her to glide. Throughout the course of the 10 or so hours of gameplay, you’ll grow your eagle’s abilities, allowing it to execute a single massive flap of its wings, pulling you upwards to higher ground — more on this later.

Scattered throughout the realm are logic puzzles. You’ll use your eagle to pick up and move objects in the environment, use your longbow to light fires, bounce arrows through reflective panels, and more to collect a yellow diamond we’ve we’ve dubbed “sparkle-whasits” as the game doesn’t provide a name for them. These sparkle-whasits are somewhat akin to upgrade points as, when you’ve collected enough of them, culminate in an additional eagle flap. More whasits mean more flaps, and more flaps means being able to traverse the terrain even faster and higher without difficulty. The flaps recover as you spend a few moments on the ground, which is really the only power recharge you’ll find outside of stamina.

As you collect sparkle-whasits you’ll also grow your stamina bar. Stamina is what you’ll use to traverse the world at very high speeds. Shooting your bow at distant targets called Talismans gives you a temporary boost, as well as recharging your stamina a bit. Run out and you are back to ordinary jogging speed, which feels glacially slow after you’ve soared to the highest heights like a rocket. After a while you’ll find supercharged Talismans throughout the world, making movement downright exhilarating.

The music in The Pathless matches the aesthetics of the main character and much of the symbology in the game — a sort of Asian / Mayan influence that bounces between something akin to Tuvan or Mongolian throat singing, flute trilling, soft stringed instruments, and the occasional quiet moments (murgu, shoor, and kengirge are the instruments, if you want to know more). It’s also really, really cool. The very few times that the Godslayer speaks to you, it again sounds like a mixture of cultures that just exudes power.

Don’t think that the world of The Pathless is devoid of story. While The Godslayer has succeeded in essentially wiping out the bulk of the world, your character (for reasons unknown) can tap into the thoughts of the dead that you find, discovering bits of lore about their final moments, their thoughts on the world as it is, or some underlying bits of culture such as how worshipping the Tall Ones might somehow curry favor for their life. It serves as a small bit of exposition that enriches the storyline and, not unlike games such as Ico, serves to suck you in and make you wonder.

Like Shadow of the Colossus, this game is about exploration, not combat. There are no creatures to fight in the overworld, instead pitting your skills against the environment. Sliding as you pull off crazy trickshots, only to leap through the air and soar onward into a distant ravine feels empowering. That said, the Tall Ones are not just sitting around waiting for you to show up at their doorstep. 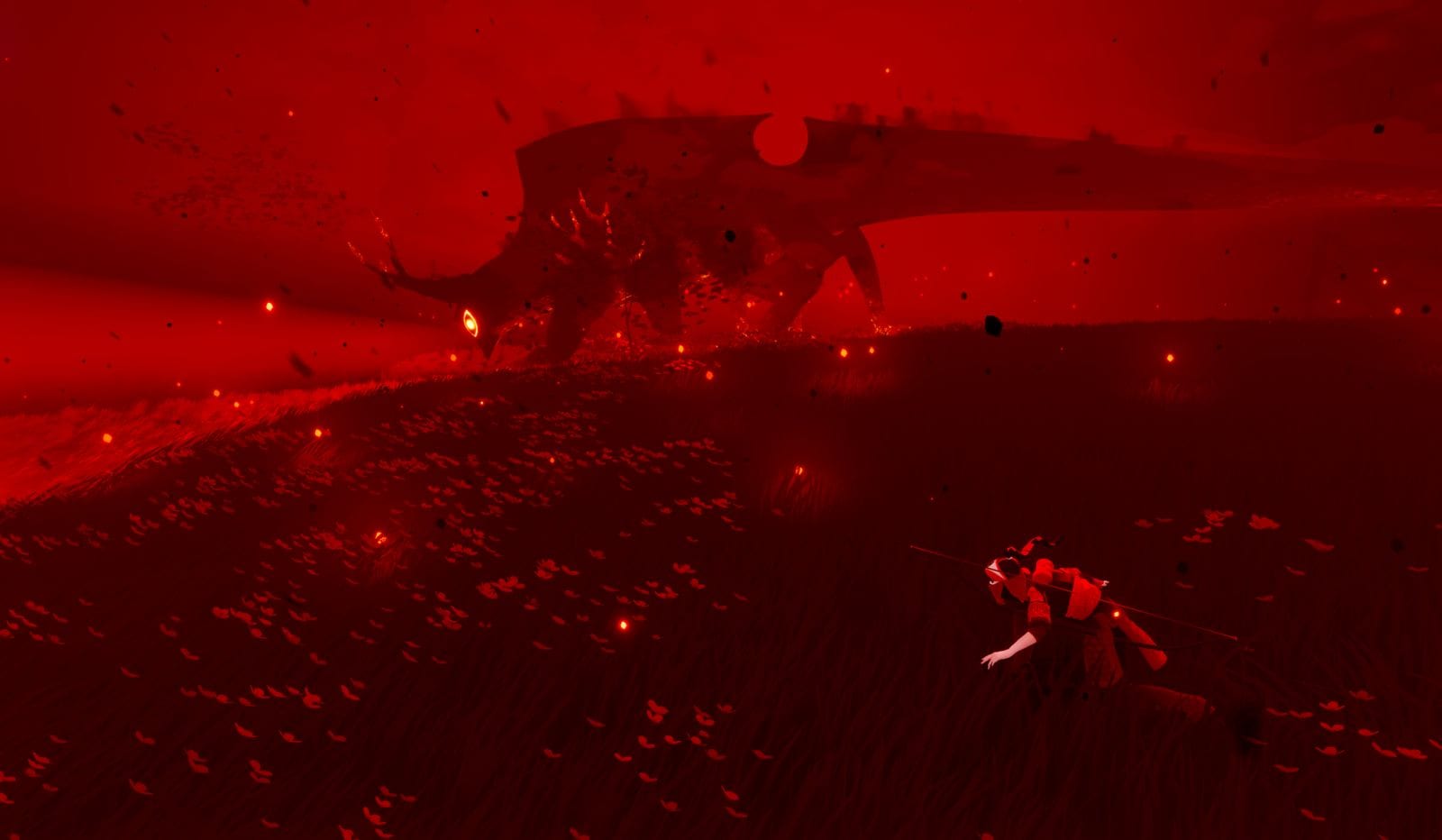 Since The Pathless doesn’t focus on combat, you can’t die. I’ve fallen from reckless heights without consequences, been set on fire repeatedly, hit in the face with fireballs, and been trampled by massive beasts. It does mean that there’s little penalty to failure besides the loss of whasits when the Tall Ones catch you, and somehow that’s… just fine, actually. Reinforcing that the concept of “lives” and “continues” is a dying concept (go ahead, enjoy the pun), The Pathless instead focuses on getting back up again when you’ve been knocked down. Resiliency is the watchword of the day.

As you explore the land you’ll spot a massive swirl of lightning and smoke that represents the Tall One in the area. When you least expect it, this cloud will suddenly expand, engulfing the world around you until you are sucked inside as well. Once inside, you’ll come face to face with that Tall One, but unfortunately for you, you are not prepared. The first thing the Tall One will do is deprive you of your eagle, smacking it into the grass below. As it shrieks for your help, it will turn its gaze upon you. Sneaking through the grass, you have to avoid their direct gaze lest it stomp your guts, spraying your precious sparkle-whasits everywhere. Should you manage to stay still when these creatures are watching you directly, you’ll eventually reach your eagle, freeing yourself from the clutches of the Tall One.

One of my favorite parts of the game is the bond you share with your eagle, and nowhere is that more true than when she’s hurt by the Tall Ones. You’ll use your thumbstick to clean smoldering ash from her wings and body — something she appreciates greatly. Truthfully, this is a missed opportunity to use the touchpad on the DualSense controller as instead you use the thumbsticks, but I’m too happy petting my eagle to notice.

While you can polish off the story in just under a dozen hours, there are a lot of little puzzles sprinkled throughout the world that cough up more sparkle-whasits. These logic puzzles can be as simple as pattern matching by shooting the right gong at the right time, to navigating challenging fire-lighting puzzles with moving blocks, raising gates, and tricky reflected shots. Whether you care about whasits or not, these are good brain teasers to solve when you need a break from exploration.

I have to admit that in the first 20 minutes of this game, I didn’t love it. By the end I simply couldn’t put it down, but with no tutorial and no idea what sounds, symbols, or glowing things meant I found myself lost and frankly frustrated. Your mileage may vary, but after another 15 or so minutes I figured out what the game was trying to tell me and it was off to the races. If you find yourself in the same situation, know that this feeling is fleeting, and there is an amazing game on the other side.

I’d be remiss if I didn’t mention how beautiful the simple environments of The Pathless are. Running at a perfectly slick 60fps and at 4K resolution, the world frequently blurs past you at a breakneck pace, but when you stop to admire it you can appreciate the subtle elements. It’s stylized in a semi cell shaded way that worked in games like The Legend of Zelda: Breath of the Wild, and it’s just as lovely here, only at far higher resolution and framerate.

Like previous effort ABZÛ before it, The Pathless leans heavily into the gorgeous cell-shaded world, and it does so with gameplay and story that keeps you locked and engaged for the entirety of its 10 hour story run. Comparisons to games like Shadow of the Colossus and Journey are apt, but seeing the world rush by at 4K and 60fps is a thing of beauty. Come for the frenetic gameplay, stay for the art.

Ron Burke is the Editor in Chief for Gaming Trend. Currently living in Fort Worth, Texas, Ron is an old-school gamer who enjoys CRPGs, action/adventure, platformers, music games, and has recently gotten into tabletop gaming. Ron is also a fourth degree black belt, with a Master's rank in Matsumura Seito Shōrin-ryū, Moo Duk Kwan Tang Soo Do, Universal Tang Soo Do Alliance, and International Tang Soo Do Federation. He also holds ranks in several other styles in his search to be a well-rounded fighter. Ron has been married to Gaming Trend Editor, Laura Burke, for 21 years. They have three dogs - Pazuzu (Irish Terrier), Atë, and Calliope (both Australian Kelpie/Pit Bull mixes).
Related Articles: Let's Play, The Pathless
Share
Tweet
Share
Submit