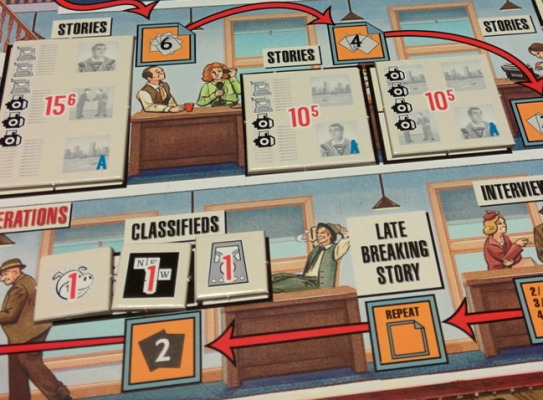 In today’s digital world, it’s difficult to imagine a world in the not-so-distant past that included rotary phones, typewriters, and daily newspapers. Sure, the latter has yet to join the others in extinction, but when was the last time you saw anyone actually read a newspaper that wasn’t online? Yet, in the days before instant news, newspapers across the country raced to get exclusive stories into their papers before deadlines in an effort to beat out the competition.

Enter Extra! Extra!, by Mayfair games, where you get to channel your inner William Randolph Hearst, Joseph Pulitzer, or J. Jonah Jameson to create a newspaper that trumps all others. Circulation is the key to the survival of any newspaper, and Mayfair reflects this by using circulation points as victory points. Players score circulation points through the quality of their stories.

While the game’s objective is clear enough, the opening set-up is not. The game is played on a three section board that realistically reflects the chaos of a newsroom at deadline, but that chaos translates to clutter at first glance. The rulebook offers little reprieve as setup is poorly illustrated and rules lack the clarity needed for understanding the game from the outset. Despite my experience with fairly complicated games, I stumbled trying to grasp the concept. Luckily, the game’s designer, Andrew Bond, has been active on Boardgamegeek explaining rules. A healthy fan base has also provided rules explanations and summaries to aid a new player. It’s a shame the game begins so dauntingly.

Stories, ads, classifieds, and photographs can be used to fill up your newspaper.

Your patience will be rewarded though. Once I got the hang of what to do, I saw how well Mr. Bond blended worker placement and hand management into a smooth system. Every player picks a board which contains a speciality such as sports, politics, or leisure though the actually speciality has little to do with game. It’s the speciality’s color that’s important. The board has a layout that will be filled with a headline, stories, columns, and several other possibilities. The boards are double sided for different scenarios. This adds considerable replay value to the game though the longer scenarios can last nearly three hours.

Every player is dealt cards that can be used to make sets to complete stories or generate income. Many of these cards contain icons for one of the specialities selected at the beginning of the game. When making sets, using your own speciality will give you certain bonuses. Once you are given your two starting reporters, you have everything you need to begin.

With just two reporters, you may find it overwhelming to decide what to do first. There are more than 10 things reporters can do so. One of the most important areas is the news desk. Cards are put here at the beginning of every round under various cities around the world. Players send reporters to these cities to collect these news cards. Since cards are the backbone to generating stories, this area can be quite competitive. The game allows you to bid for these slots. In my review game, I snagged London early because it had four news cards on it. My opponent quickly put her reporter on London along with $100. This action bumped my reporter off. To regain the position, I could have placed my reporter back and $200 but with only $200 in my budget it was a risk I was unwilling to take. That cost me later as she was able to have a sizable hand to use when selecting stories.

As the game moves on, your newspaper begins to take shape.

Having money available is crucial to keeping a successful newspaper. Every reporter costs $100 to keep each round, but your newspaper only generates $400. To earn extra money, you can sell cards you don’t need or place advertisements. However, advertisements don’t generate circulation points, so there’s a delicate balance between maintaining an effective paper and ending up with an ad filled paper doomed for the bottom of a bird cage. It’s just a shame the Pez-sized money are so similar that it’s nearly impossible to tell the difference between a $100 and $500 bill. In fact, we ended up just saying each was $100 to skip the confusion.

So why even expand your empire? With two reporters, one can go to the news desk while the other finishes the story. With the money you save, you can always outbid to get the best cards at the news desk, right? Well, the game includes ways to improve your story by interviewing sources, grab clippings that act as wildcards, or placing classifieds that require a fleet of reporters to pursue. There’s really many paths a player can take to victory.

Extra! Extra! is a good game that just needed a little more polish. The rules are cluttered. Couple that with the sheer amount of cards, meeples, and pieces, and you could excuse someone for getting stuck before the game ever gets started. Still, for those willing to stick with it, they will be treated to a game that rewards good planning. There may be nothing groundbreaking here, but the game is definitely worth the cardboard it’s printed on.

Extra! Extra! may not give off a great first impression. The unwieldy rules and cluttered layout will frustrate you early. Stick with it, and a solid game eventually emerges that rewards shrewd gameplay and clever bidding.