In the early days of gaming, single player experiences dominated the market more than multiplayer ones. As time has passed, we’ve become more connected across larger distances, and that’s especially true in video games. Now you can play games with people halfway across the world like it’s nothing, and that’s incredible. With so many games adding multiplayer modes or being strictly multiplayer, sometimes single player modes get left out. For example, I reviewed KARDS: The WWII Card Game a little while back, and it was only multiplayer at the time. Now, you can purchase a single player campaign to go along with the already free multiplayer modes. How does this solo addition stack up? The answer: pretty well actually.

Since I’ve already gone over how the game plays, what’s good and bad about it, etc. in my base game review, I’m going to focus purely on the Theaters of War campaign. If you want more information on the game as a whole, I’ve linked my previous review above. Reading that first will honestly help you understand what I talk about here a lot better.

To start, Theaters of War grants you access to five campaigns, with one following each of the game’s nations: The U.S., Germany, Britain, Japan, and the Soviet Union. Each nation’s campaign follows them on their journey throughout WWII, and consists of five missions. Before starting any battles, you’re given three war strategies to choose from. These strategies vary based on what country you’re playing as, which is a nice attention to detail. Not every nation’s army fights the same way, especially back during WWII. Each strategy has a title, along with a description detailing what that deck is based around. It’s good that you get a general idea of what your deck will be like, but the downside is that it’s still only a general idea. You won’t know what cards you’ll actually be using until you’re playing the missions. That means you should definitely read the descriptions carefully and decide what you think might work best for you. Trust me, it helps keep you from going in completely blind. After choosing your strategy, the campaign begins. 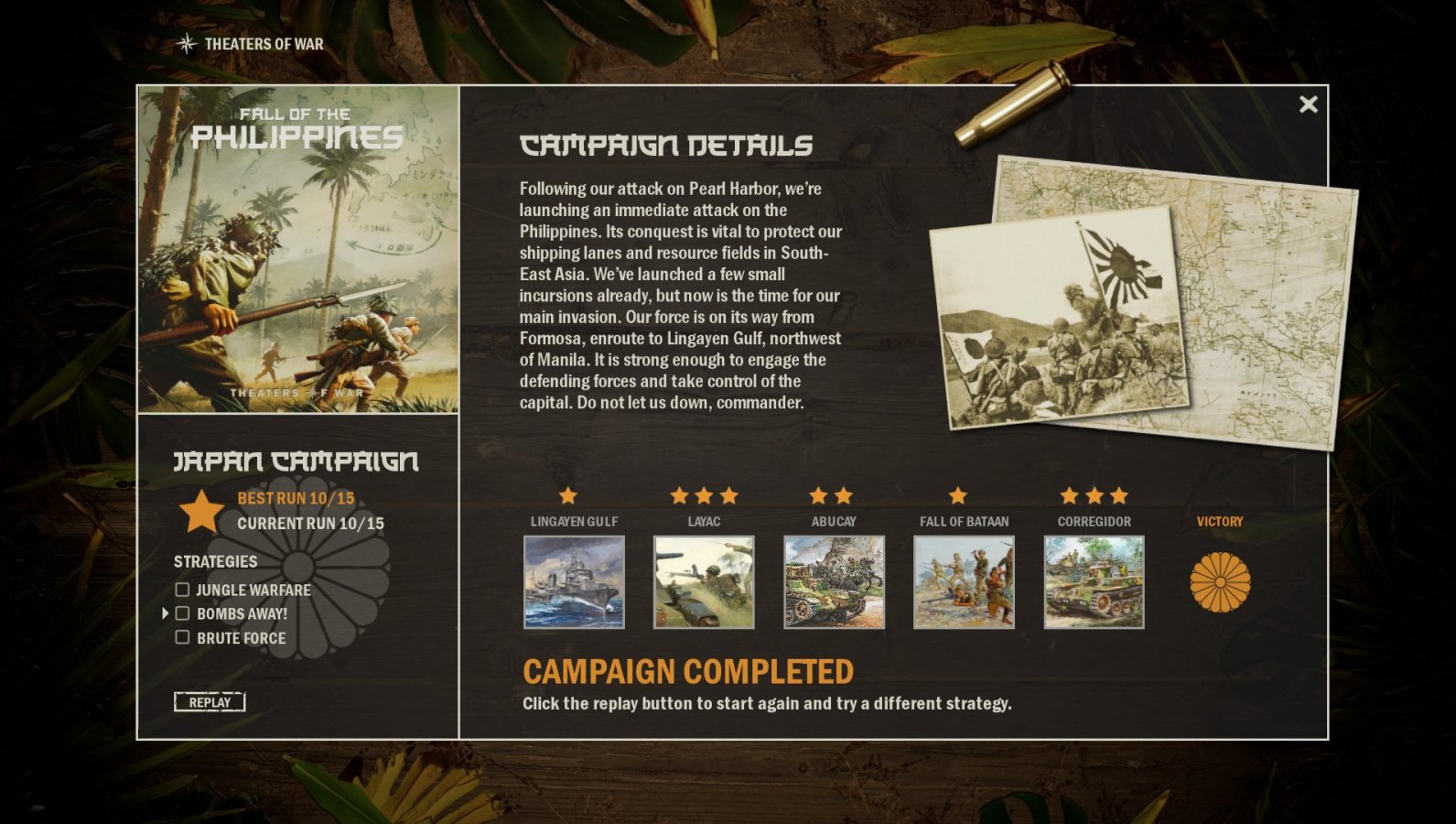 Before starting a mission, you’re given a message about the current state of your troops and what needs to be done for the war effort. This is in terms of the war aspect of the game, not actual gameplay. Next to this message will be your goals for the match, including victory conditions and special bonuses that affect you or your opponent. The victory conditions and bonuses are representative of the message on the left, which is pretty neat. For example, if the message says that your base is getting overrun and you need to hold out for reinforcements, then the victory conditions may be you surviving until you’ve played six fortification cards from your deck. It’s a good way to connect the war aspect of the game with the card battling aspect. Another example is you being given more kredits per turn than your opponent due to your army mounting a strategically planned attack.

In addition to the victory conditions, there are also special challenges that you’ll earn stars for completing. These can involve winning within a certain number of turns, controlling the frontline when you win, and more. The stars are only for bragging rights and to show how well you completed the missions. That said, it’s pretty nice getting all three stars when possible. As a side note, if you fail a mission, you can retry it as many times as you’d like. You thankfully don’t have to restart from the first mission and successfully beat them all in a row. That made me happy since I failed some missions a few times.

Speaking of difficulty, the missions seem to range from medium difficulty to hard depending on the victory conditions. Not only that, but depending on the mission, you may be forced to start in a losing position. Honestly, that happens a lot, and you’re left to fight your way out of it. I’ll admit that I felt awesome when I fought back and turned the tides of war on my enemy, but it didn’t always go that way. Sometimes they kept the pain coming, and I got my ass handed to me. It may get a bit frustrating, but learn from the previous failure and use that to get ahead. Missions don’t start any differently when retrying them, so you have the chance to kick things off in a new way if you have options and your last plan didn’t work. 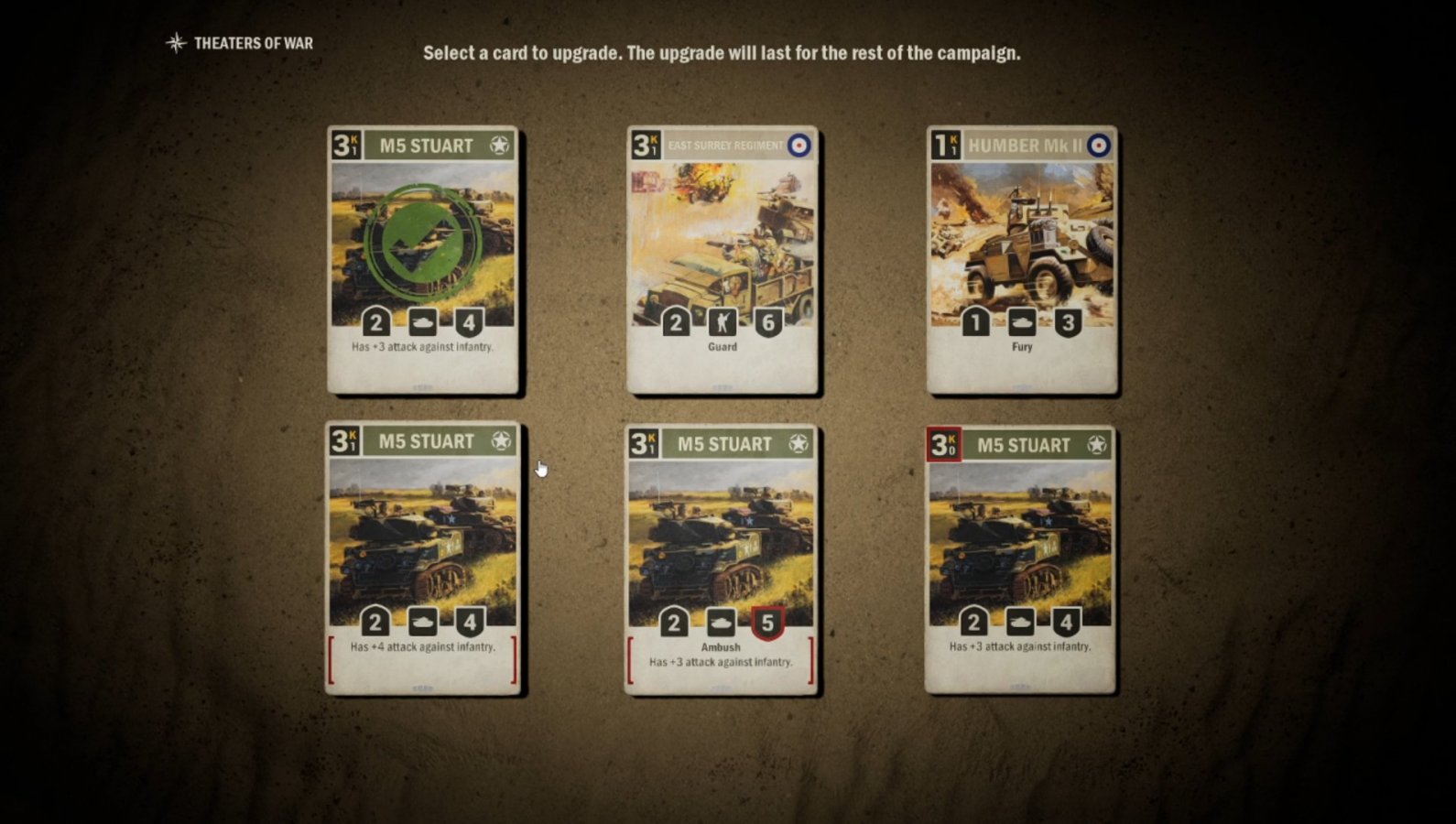 After completing each mission, you get the chance to upgrade one of your cards for the duration of that campaign. After choosing one of three available cards, you get to pick one of three upgrades. It could be a lower operation cost, it could increase their attack or defense, or even add extra traits to the card such as fury or guard. I was surprised by this, but it does add a sense of progression, even though it’s only one card. That being said, these upgrades can really come in handy down the line. Once you’ve completed all five missions, you’ve beaten that campaign, but can always retry it to get more stars. Completing the campaign also rewards you with special packs of cards to use in your decks for other modes. There are 40 new cards added from these campaigns. It’s a nice little reward for succeeding, even if it isn’t a lot. From there, you’ll likely want to try out another nation’s campaign. Each campaign is going to play differently and have its own set of challenges, so be prepared for that. The battles are tough, but they’re so satisfying to win.

Overall, the Theaters of War campaign is a great addition to an already enjoyable free to play card battler. The downside is that the solo campaign isn’t free, and what’s worse is that it isn’t cheap. As of writing this, the entire Theaters of War campaign costs $29.95, or you can purchase individual campaigns for $7.95 each. . It’s not the most expensive expansion in the world, but it’ll likely turn some players off. I’ve been told that you can also purchase the campaigns with in-game gold if you prefer, but I’m not sure how much gold it’ll cost just yet. That in-game currency cost alleviates the negatives a bit since you aren’t forced to cough up actual cash to get the campaign, but some people still won’t be happy. Even so, I had a good time with Theaters of War and its card battling combat.

KARDS: Theaters of War is a great addition to an already enjoyable free to play card battler. The missions are challenging and feel satisfying to win, but they often put you in losing situations that are hard to crawl out of. Having to pay for an expansion to a free game may turn some players off, but there will be an option to purchase with in-game currency as well.

Codi loves to play video games and watch movies. He will watch almost any kind of movie just to experience them. His ideas take inspiration from the shows and movies he watches, and games he plays. He also loves a good pun.
Related Articles: KARDS: Theaters of War
Share
Tweet
Share
Submit