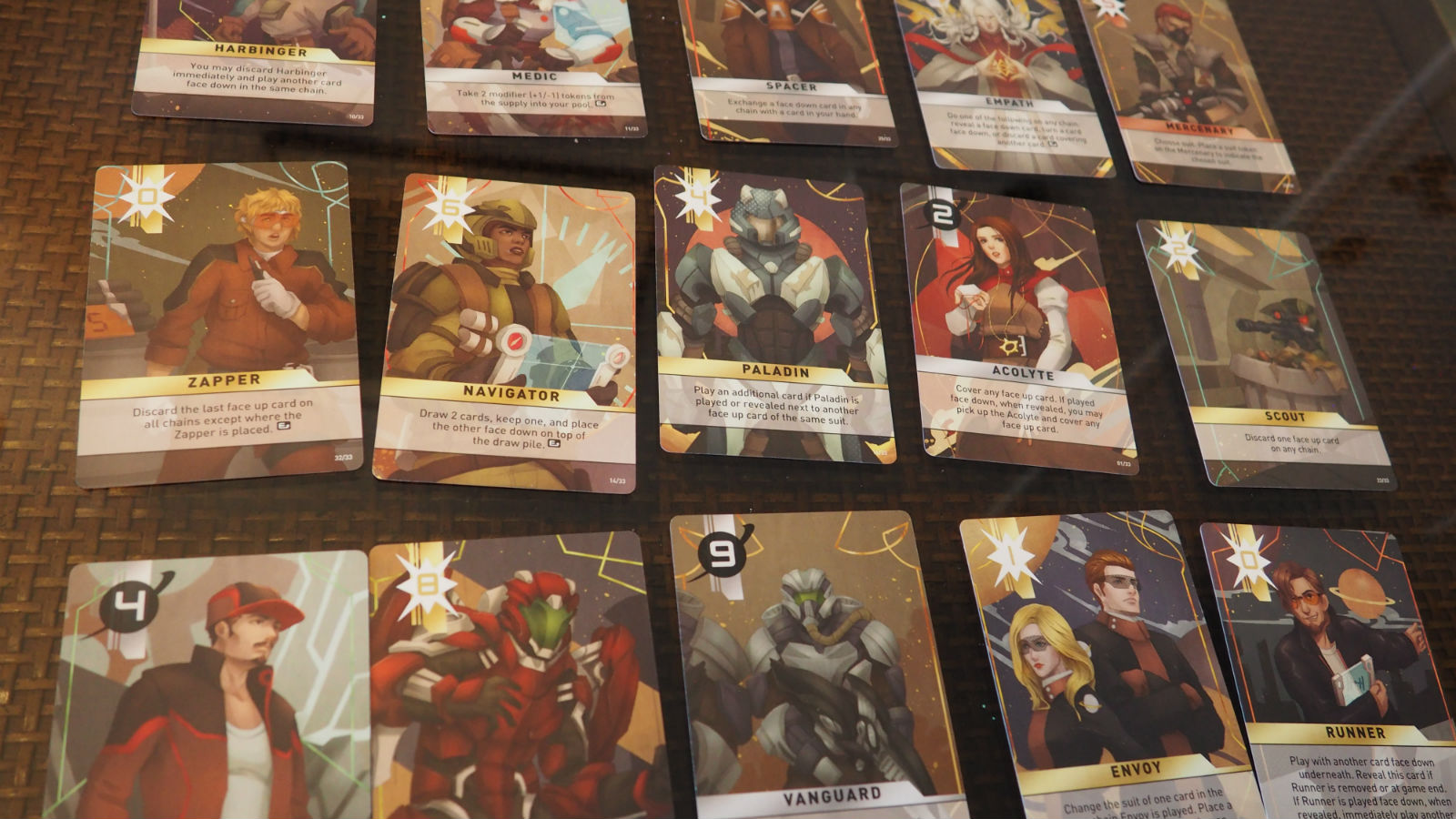 In the short opening paragraph of its instruction booklet, Sovereign’s Chain pitches itself as the aggressive card game of the future — the kind of game you might play while searching for a smuggler to take you into restricted space or while passing time on the Nostromo between landings. The comic book-style art of each of the cards does a good job of setting the scene, but the game isn’t overly concerned with worldbuilding. Throw on your favorite synthwave playlist and dim the lights, and Sovereign’s Chain might fulfill any fantasies you have as a degenerate space gambler, but its real strength lies in its unpredictable, competitive gameplay rather than its atmosphere.

To play Sovereign’s Chain, you take turns with up to three opponents laying cards in front of you to form a “chain.” Each card adds points to your total and triggers an ability (letting you draw additional cards or force discards, for example). Cards come in two suits: planets and stars, and your goal is to have the highest difference in points between these two suits at the end of the game. When any player reaches seven cards in their chain, the game enters a final, sometimes chaotic, phase of revealing hidden cards, then scores are tallied. It’s a simple enough concept to learn in a game or two, but Sovereign’s Chain packs enough surprises to keep it from getting stale. 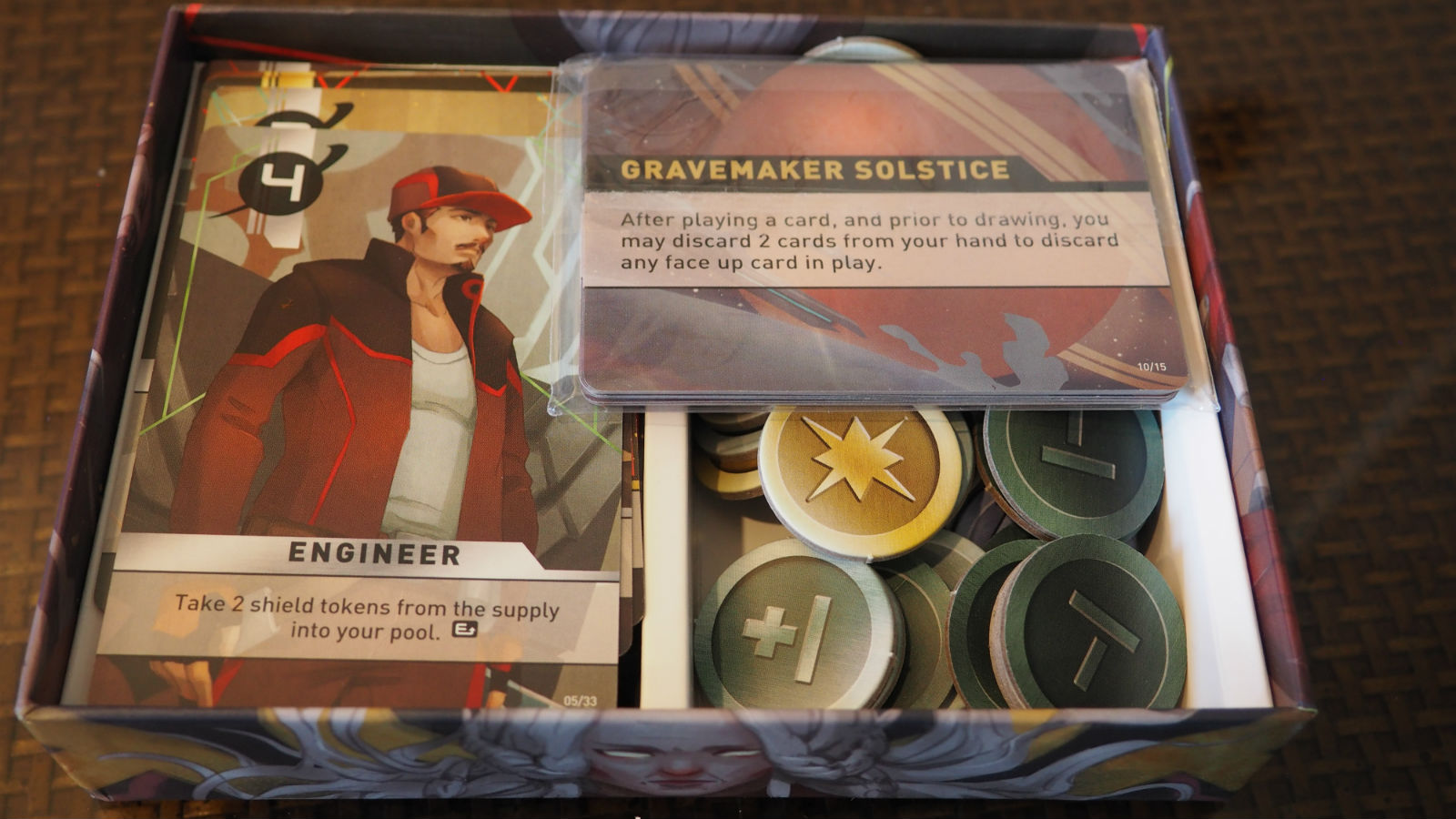 With the goal of getting the highest score you can on your chain, you might imagine Sovereign’s Chain to be a relatively peaceful game of cultivating the best cards you can, but it throws that out the window with one twist: on your turn, you can play a card on any other player’s chain as well. Your orderly collection of high-scoring cards can be undone quickly if an opponent lays a strong card of the opposing suit at the end of it, and there’s even more potential for mayhem when you take cards’ abilities into account. Abilities that let you change a card’s suit or take it out of play entirely can be particularly powerful. In some circumstances, you can even play cards facedown, only to be revealed in the game’s final moments, which can throw even the best laid plans into complete disarray. When facedown cards are revealed, their ability is triggered by the person who played them, meaning you can essentially lay a trap for another player and decide how best to use it when the time comes. There are ways to protect your most valuable cards using shield tokens awarded by some abilities, but resourceful opponents have plenty of ways to screw things up regardless.

The cutthroat nature of Sovereign’s Chain and the ease with which players can absolutely destroy several turns worth of planning can be frustrating, but it’s equally exciting when it’s your turn to cause chaos. Keeping mostly to yourself and stacking up high-scoring cards can often be an effective strategy despite attacks from your opponents if you’re able to stock your chain with some good facedown cards to tidy things up in the reveal phase. Going fully offensive will often leave you with too low of a score to compete with the players you’ve been undermining, but the game seems to be well balanced to favor a good mix of offense and defense. 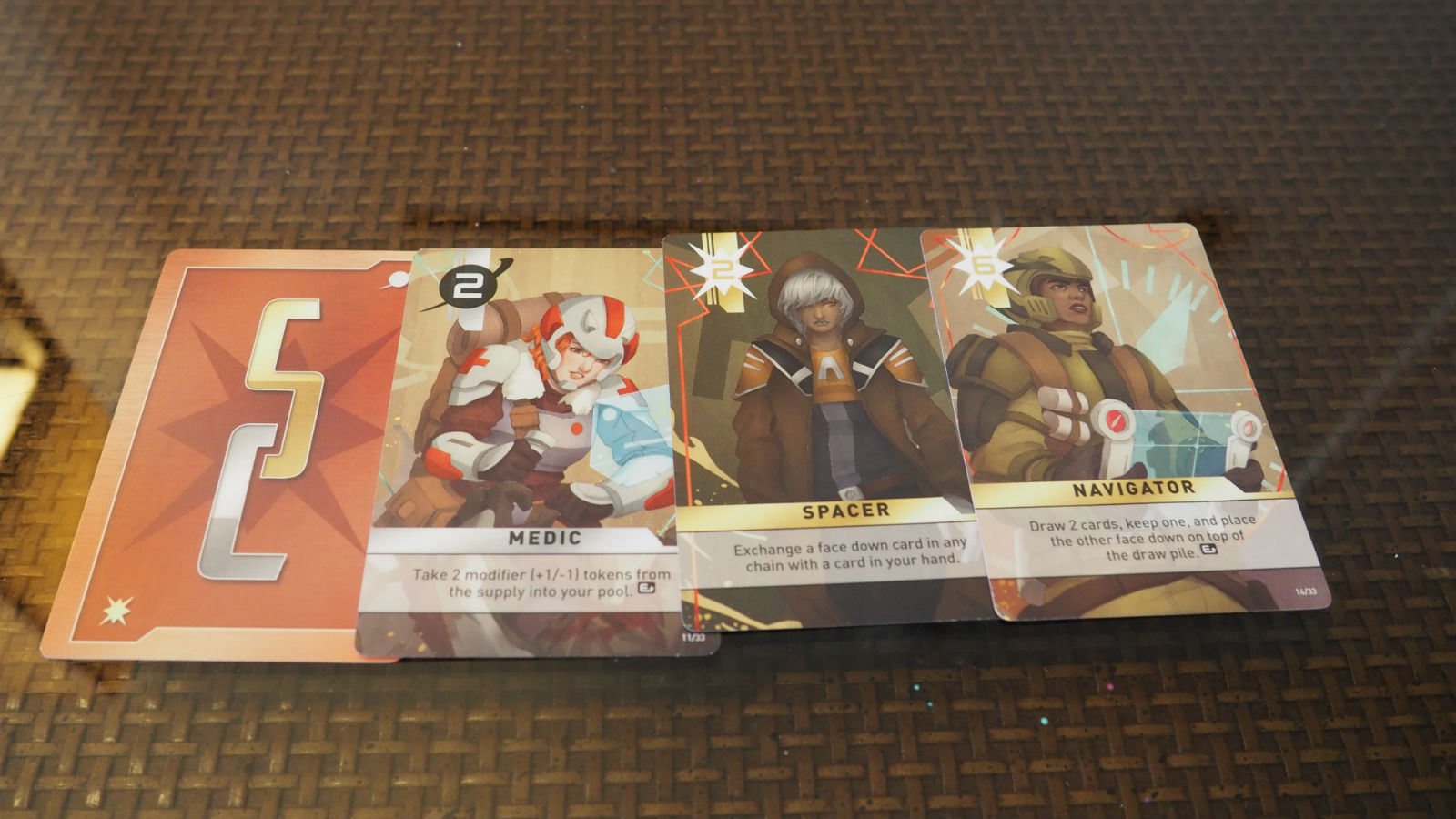 Despite having a good variety of cards, you can easily see all the tricks that Sovereign’s Chain has to play with in a game or two. That’s makes it easy to teach new players, but it does mean that there’s not a ton of novelty from game to game. That’s offset somewhat by the addition of event cards, which can make major changes to the way the game works. Event cards (which have some incredibly metal names like Gravemaker Solstice and Celestial Decay) can be triggered by other cards’ abilities and they usually stay in play until an ability tells you to replace one with another. These events can do anything from letting you draw shield tokens each turn to only letting you play on another player’s chain, and they do a great job of mixing things up. Even the most seemingly foolproof strategy has to change when you’re suddenly told to play two cards per turn or swap some of their suits. They offer a nice change of pace without completely turning things on their head, but you can just as easily leave them out of the game entirely if the added element of randomness is a step too far for you.

Sovereign’s Chain also offers a solitaire option that’s a solid choice if you’re looking for a solo game, but it’s definitely not the main draw. Its modified ruleset has you trying to make a successful chain with a limited hand of cards, but it cuts out the competitive aspect that really makes the game shine. Without other players to shake things up, the simplistic basic mechanic of the game and limitations of their abilities start to show a lot more. 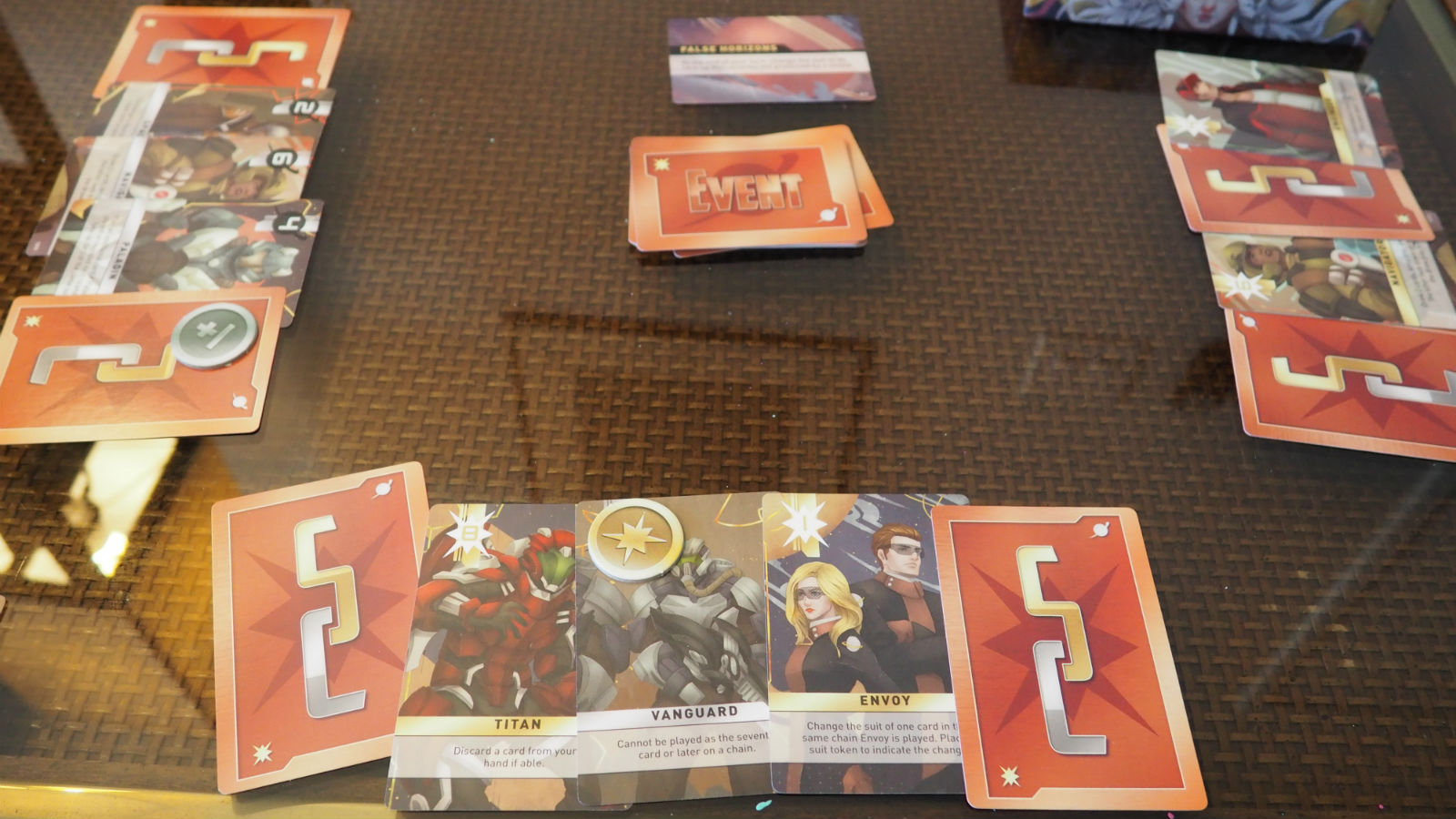 Overall, Sovereign’s Chain is an easy game to recommend, even if I’m not totally enthusiastic about it. It’s highly competitive without feeling too punishing, and the layers of randomness give even novice players somewhat of a chance against veterans. The simple rules seem like a bit of a double-edged sword, since they make the game easy to teach to newcomers, but also keep a pretty low ceiling on how strategically you’re able to play. I would have liked to see more interactivity between players during games, as just playing cards on different chains feels pretty passive, and there’s plenty of room for the Sovereign’s Chain to go deeper with its theme as well. Despite those quibbles, though, it’s a solid game that’s easy to teach, takes less than half an hour play, and fits in one tidy little box, making it an excellent choice for a quick card game that you can even play on the go.

The central chain-building mechanic of Sovereign’s Chain is easy to teach and play, but still offers enough strategy to keep games interesting. It’s very competitive without feeling mean, and there’s enough randomness to give even new players a fighting chance in every game. Sovereign’s Chain may not be revolutionary, but its fast-paced gameplay stays exciting round after round.

A committed indoor kid, Bryan moved from Pittsburgh to Los Angeles for a prettier landscape to ignore. They can be lured outside with promises of taco trucks and film festivals, and enjoy trawling through used book stores for works on the occult. Bryan has been gaming since the SNES era and is a sucker for good pixel art.
Related Articles: sovereign's chain, Tabletop
Share
Tweet
Share
Submit