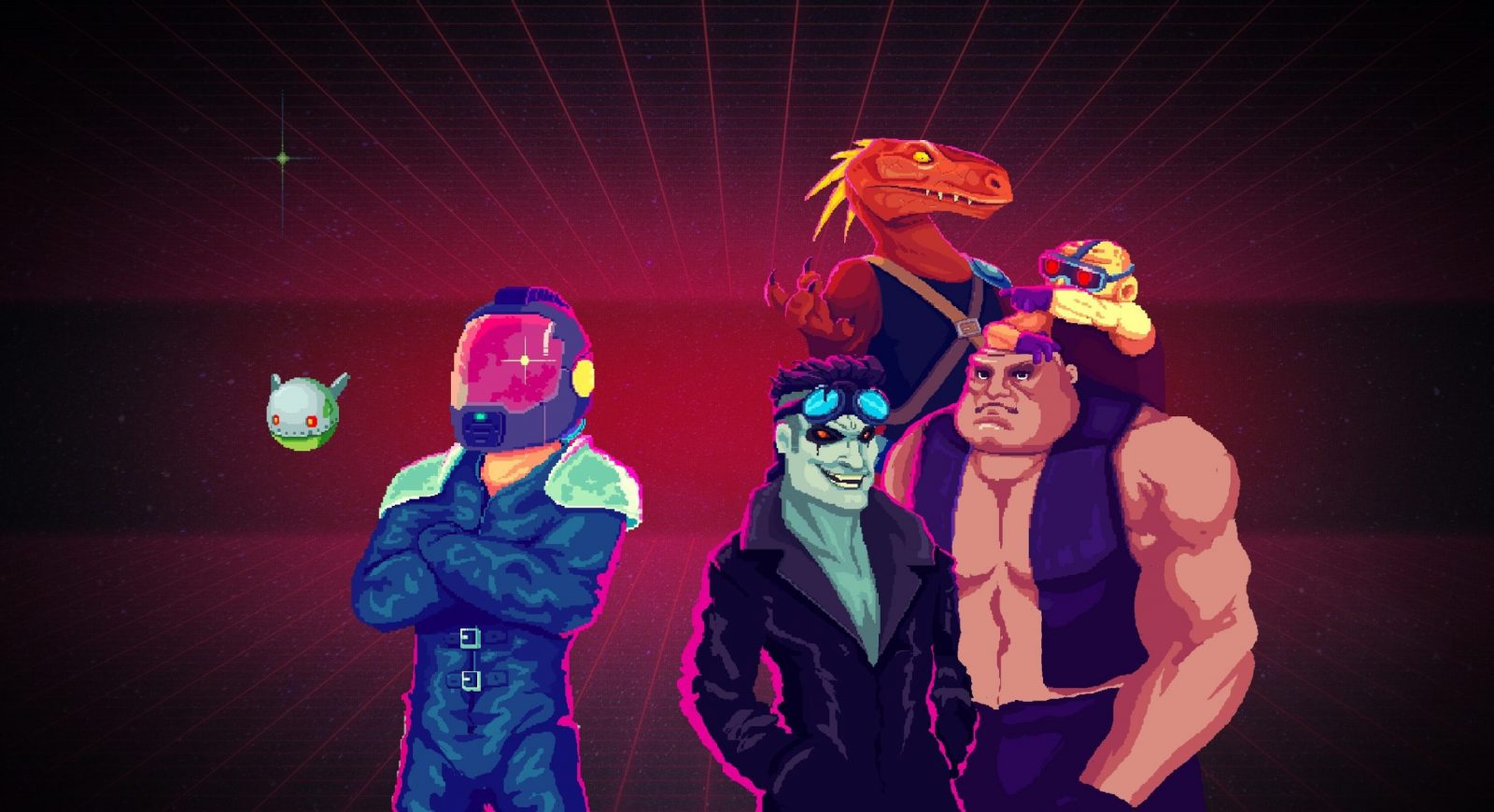 There’s an old proverb that says history will repeat itself. As someone who remembers gaming in the 80s, there’s always a chance that we can get the short end of the stick when studios try to make retro games in this new age. Things like bad overall design, rush jobs leading to poor programming, and bland graphics were all unfortunate blights that came to mind. Fortunately, there’s a silver lining to what Fantastico Studios did with Black Paradox. On the other hand, I wondered if I was better off playing a game that looks like this was a carbon copy of.

Black Paradox is a side-scrolling space shoot ‘em up where you play as the bounty hunter Black Paradox, but you won’t be shooting from the hip. With you piloting one of the most infamous cars of all time in space and blasting everything in your path with an 80s flair, it’ll truly feel like you’ve gone back to the future. Now, there are some grim comparisons to another game called Steredenn, but I’ll let you be the judge of that on your own time. 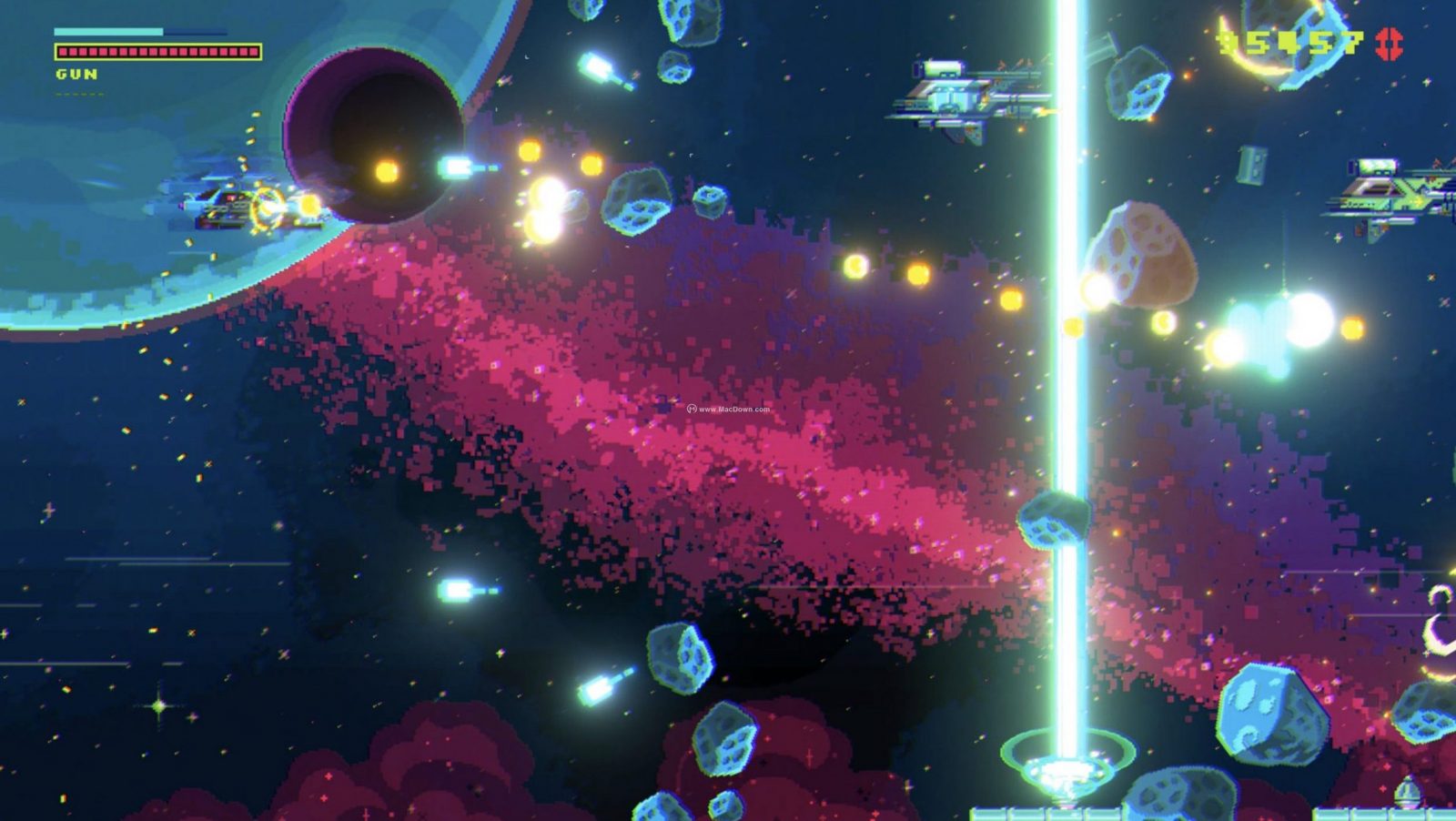 Blast from the past

Like watching Bladerunner, there’s a feeling of being in the center of a neo-noir storyline, albeit without the complex character arc. Met by a character dressed in black and feeling like there’s only one way to take down a gang of outlaws, Black Paradox quickly spins up the story, spits a few lines of dialogue at you, and sets out into a universe of fast action, a barrage of bullets, and an amazing musical score.

I wasn’t sure what to expect as far as gameplay and feel of the game, because I would have assumed that Black Paradox would have added new elements and mechanics to the gameplay, especially when it seems so similar to another. Yes, you’re flying through space in a car that clearly was made for roads, but I recall an old scientist saying something about flying DeLoroeans not needing roads. Watching the souped-up DeLorean come to life in a few multi-shots of animated frames, I was dropped into the game where I was guided through a quick tutorial of the basic mechanics of the game. Once finished, I began the hunt for what appears to be the galaxy’s most wanted criminals. 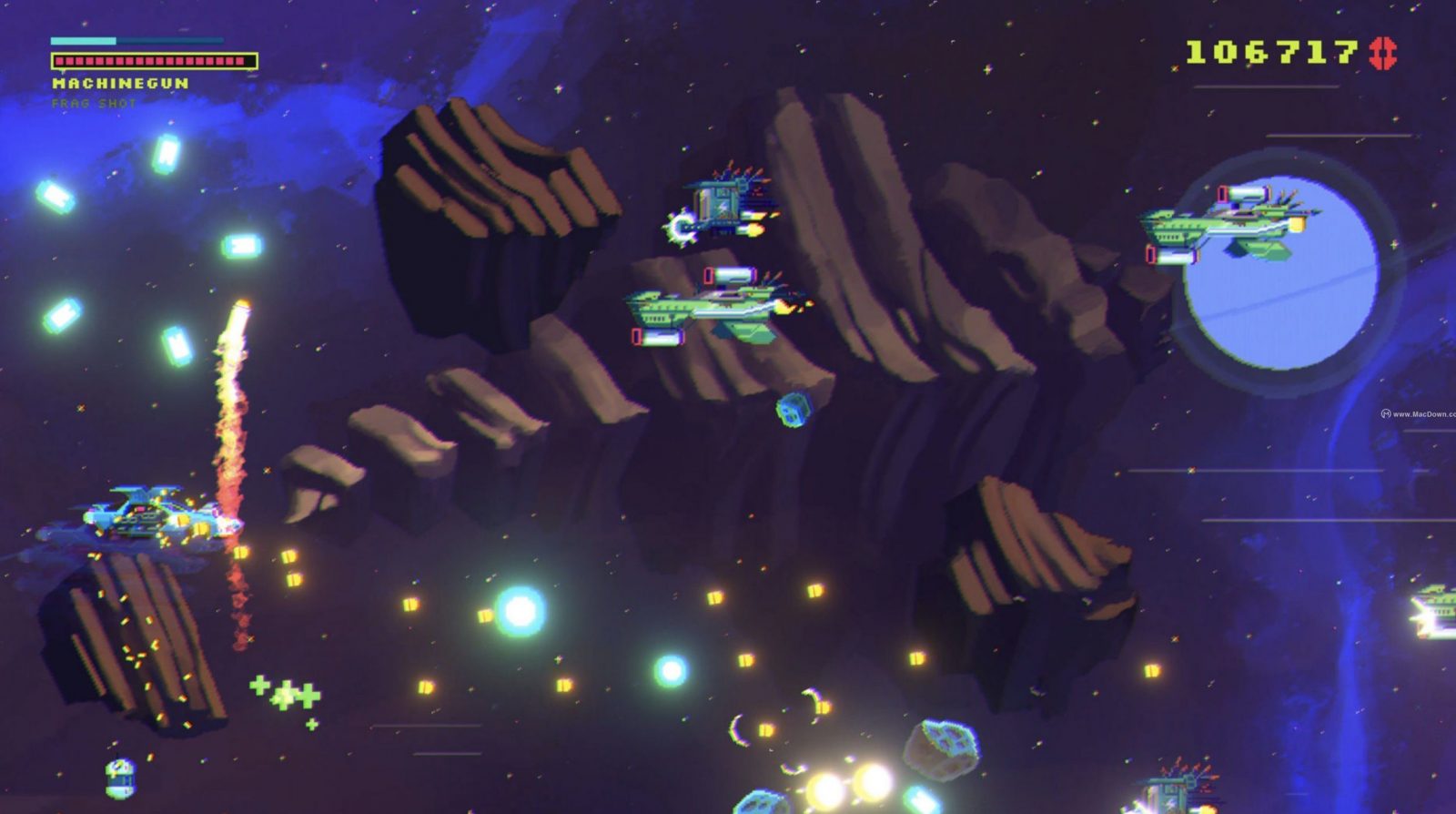 Every DeLorean can fly

When the DeLorean blasted onto the scene, I was met with a stunning array of pixel art design and vibrant colors that only an 80s style game can mesh together successfully. Like all side-scrolling games, the background slowly skips by as the retro soundtrack winds up to deliver one of the most fitting beats I’ve ever come across in a game. As I came to grips with waves of enemies bombarding me with a barrage of bullets, I’ll admit, I died a few times on the first level; but this is where I noticed that the levels, weapon pickups dropped by enemies, and the enemies themselves were procedurally generated. This definitely adds a lot of gameplay spontaneity and complexity to each level, especially when you die and are forced to repeat the entire game from the beginning. This is frustrating and difficult but adds a great deal of replay value to the game, and difficulty was a staple to gaming in the 80s.

Subsequently carry two types of weapons. The second is picked up from destroying an enemy that’s carrying it. Unlike most games where the secondary weapon picked up has a limited number of bullets, you’ll keep the weapon until you fail and are forced to restart or at your garage menu, where you can add upgrades to your DeLorean for your next run. You’ll pick up items that you can equip in your garage by defeating bosses or by purchasing them with the credits earned in-game. Unfortunately, accessing the garage feels like a smack on the wrist with a ruler, as you can only access it at the beginning of the game or after you die. I get it, they don’t want you to switch up certain abilities on the fly, but with procedurally generated worlds and enemies that all hinder your progression, the absence of accessing the garage after beating a boss or while playing feels like you‘re constantly at-war with the game; and you rarely win. 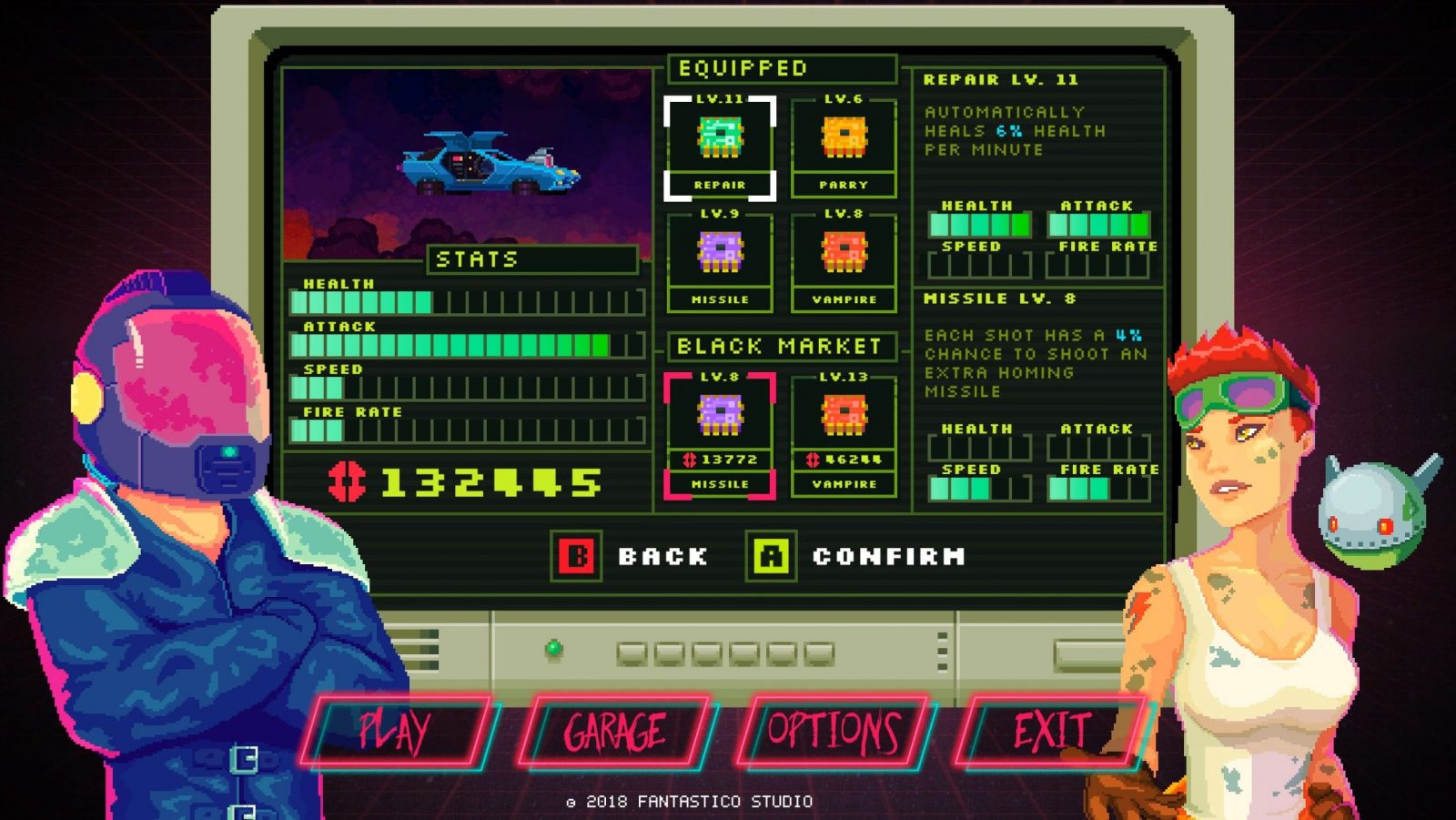 Time to get modified

Like the secondary weapons you’ll pick up, these upgrades can make your next run feel as if you’ve progressed enough to take on the next level and boss or that all your hard work hasn’t quite paid off yet. You see, some weapons and upgrades picked up can hinder your progression in the earlier stages where the procedurally generated enemies have you out-manned and outgunned. A few times, I picked up a secondary weapon that fired in the direction in which I moved my ship. So, if I found myself overrun with enemies attacking from the front, I would be firing backwards as I retreated. I don’t have to tell you that this weapon is completely useless, and it can inherently ruin that particular run through the level. There’s definitely an imbalance in the game, not necessarily with damage dealt or taken, but how the game handles procedurally generated items.

While trying to navigate a world where asteroid fields and incoming ballistics are always determining how you move on the screen, there’s absolutely no room for error when it comes to control. For me, the movement of the Black Paradox vehicle is slow and has a bit of lag when trying to maneuver. Too many times I was caught between spiraling bullets and a fleet of incoming enemies and felt as if I had a tanker in tow while moving. While fighting bosses that appear at the end of the short stages, this isn’t as much of a problem because the bosses aren’t a fleet of enemies that take up the entire screen. 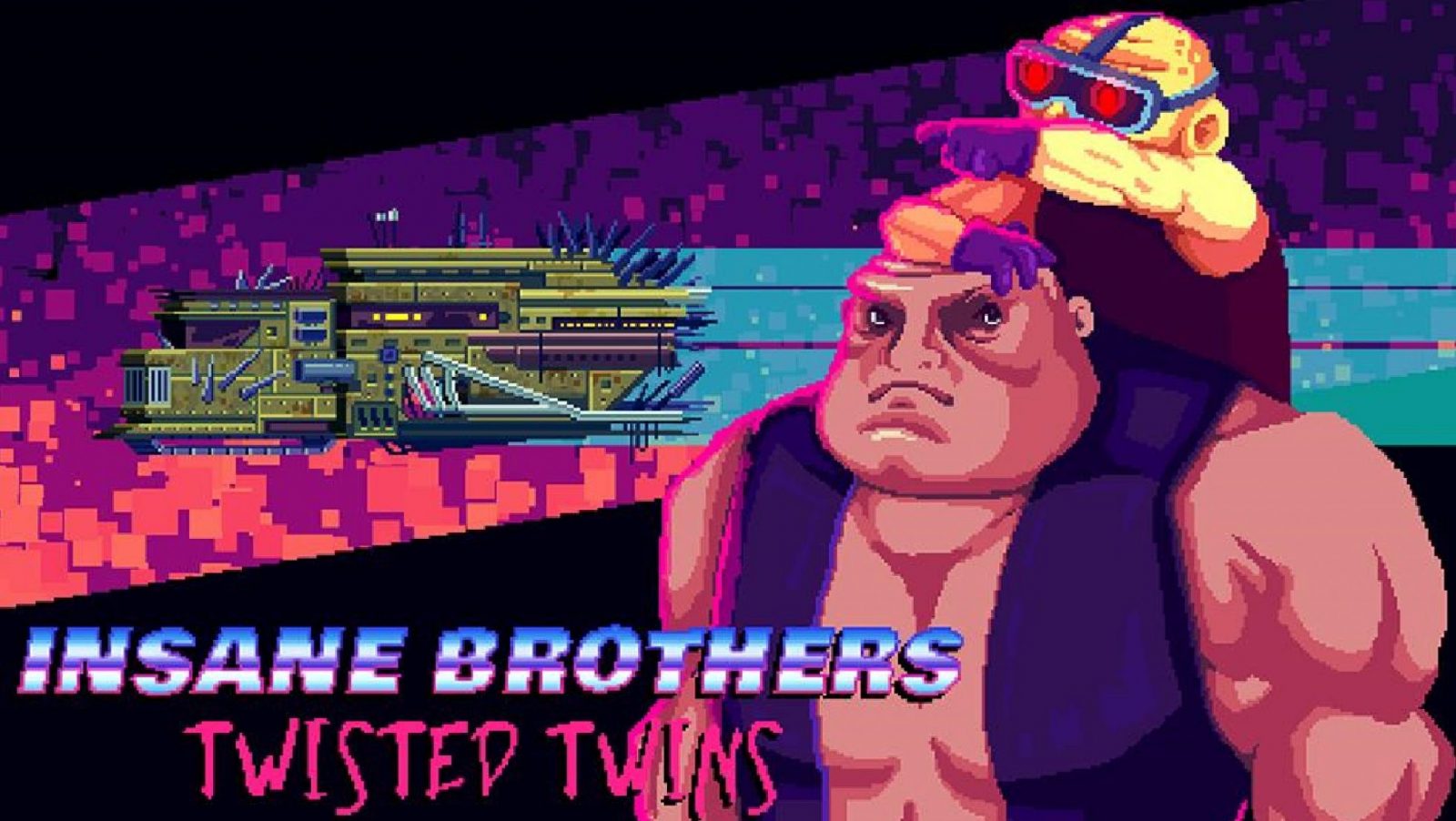 Paid the cost to be the boss

On the flip side, each boss feels like they bring something different to the fight as far as looks and abilities. Some are able to create clones of themselves, some come with a blitz of offensive attacks, and some you can stay in one place and cheese, if you have the right weapons. Fundamentally, when playing a side-scrolling game such as this, it requires a bit of skill to be successful. This game unfortunately feels as if it puts the gameplay in the hands of its procedurally generated world and you are simply flying by the seat of your pants as you try to come to grips while navigating it.

The visuals and 80s soundtrack are amazing and look great whether playing on a TV or on the Switch in mobile mode. Too often did I feel I was on the back foot when it came to weapons, upgrades, and dealing with random enemies. There’s definitely a balance issue when it comes to the procedurally generated mechanics.

T.K. is a freelance writer, narrative designer, and author. Writing and developing narratives and giving voices to digital world and characters is his passion. As a game writer, QA game analyst, and editor for Gaming Trend, he enjoys being a part of the gaming industry.
Related Articles: Black Paradox, Indies
Share
Tweet
Share
Submit