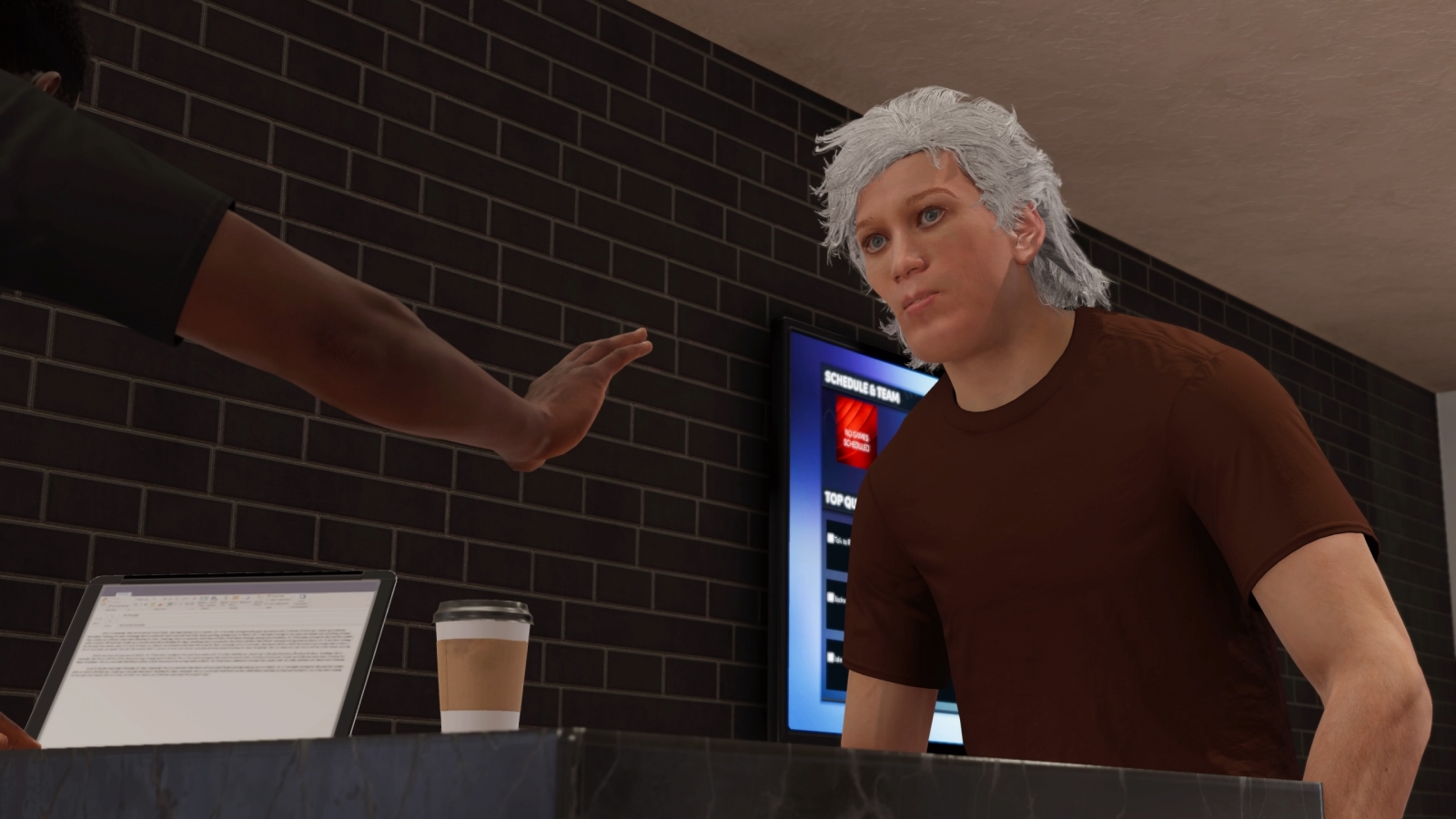 Mr. Basketball is a seven foot tall monstrosity and star athlete, who only sometimes has freckles. He and his best friend/manager are working to get Mr. some attention before he declares for the draft. There’s just one problem though: Mr Basketball is absolutely garbage at the sport. Can our hero somehow stumble his way to stardom? Or will he never live up to his namesake?

Being completely honest, I’m not much of a sports fan. Sure, I played some growing up and in school, but I’ve never really enjoyed playing or watching them. I do, however, love video games! Enter NBA 2K22, a basketball video game. While I am a newcomer to these kinds of games, I hope they can shed some light on why people love sports so much and who knows, maybe it’ll ignite an interest in basketball for me.

2K22 is, obviously, the latest professional basketball simulator presented as an annual franchise. People who play these games may already be familiar with the controls, but I jumped into the tutorial immediately and we’ve already got our first set of problems. Specific to my lack of culture, the game doesn’t tell you the rules of the sport, ever. In many matches in the campaign, I was fouled with absolutely no explanation, so they definitely expect you to go in knowing how it works already which I believe is a misstep on the accessibility front at the very least. The next problem is the controls themselves; any inputs you make feel like a vague suggestion from several blocks away and your character seems to just do what they want. Movement appears to prioritize animation above, well, responsive and fluid movement but again in such a way that makes it feel like you’re barely in control. Shooting has to be the most awkward of all, however, as it’s done with the right stick. You push the stick up to begin shooting, and let it go when a cursor reaches a certain part of your meter. On top of taking too long to register that you’ve moved the stick, the cursor will only stop shortly after you’ve released the stick, making the timing much weirder than it needs to be.

What the game doesn’t tell you is that you can actually just use a button for basically everything you can do with the stick. I only learned this from my little brother who used to play the series, and that’s because the menus are also horribly designed. They put style over function in the UI here, with selections in menus haphazardly laid out (putting microtransactions at the top 100% of the time). It’s difficult to know what you can actually do in the game, because navigating these menus feels like learning a new TV guide in the worst way possible. For whatever reason, even the options menu only applies to whatever game mode you’re currently in – there’s no way to adjust controls or sound on a global level so if you change one little thing you’ll have to replicate it at least four more times in each mode. 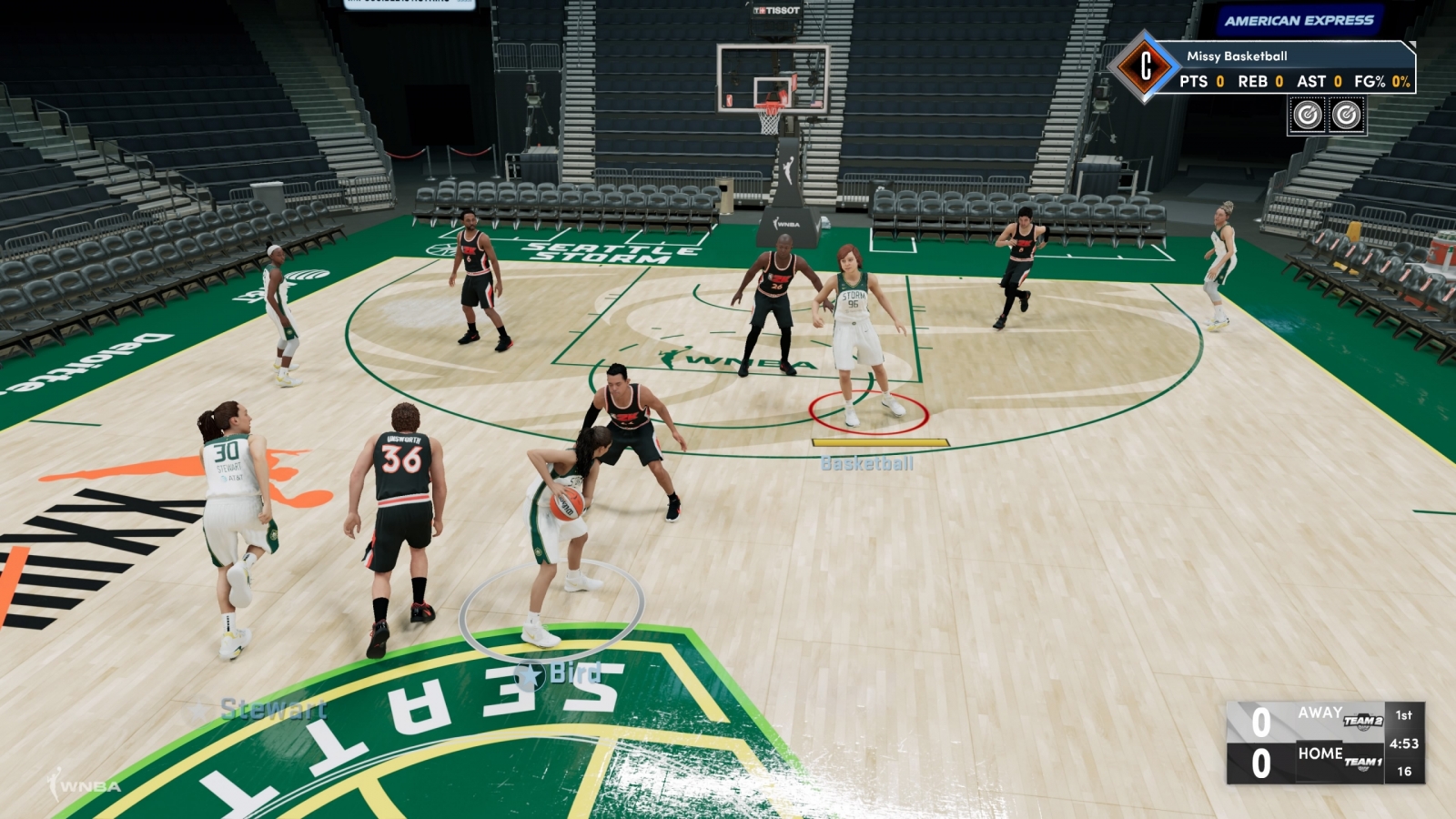 Speaking of modes, 2K22 definitely has a lot of them. The first option is My Career, which sees you creating a character and trying to go from high school graduate to NBA superstar. I watched a playthrough of a previous game’s story mode, directed by Spike Lee, so I had high hopes for this one to be, if not good, hilariously bad. Unfortunately, this mode simply falls into the uninteresting category between the two.

Your character, in my case Mr. Basketball, is nicknamed MP as the game is fully voiced and your friends need something to call you. While the character creation is surprisingly detailed, like all other menus it’s very difficult to navigate with finer details buried behind other menus. After designing your look, you assign points into several categories to determine what your player is good at. Mr ended up being a 2-way facilitator, whatever that is, and after picking two special perks we’re off to the races. 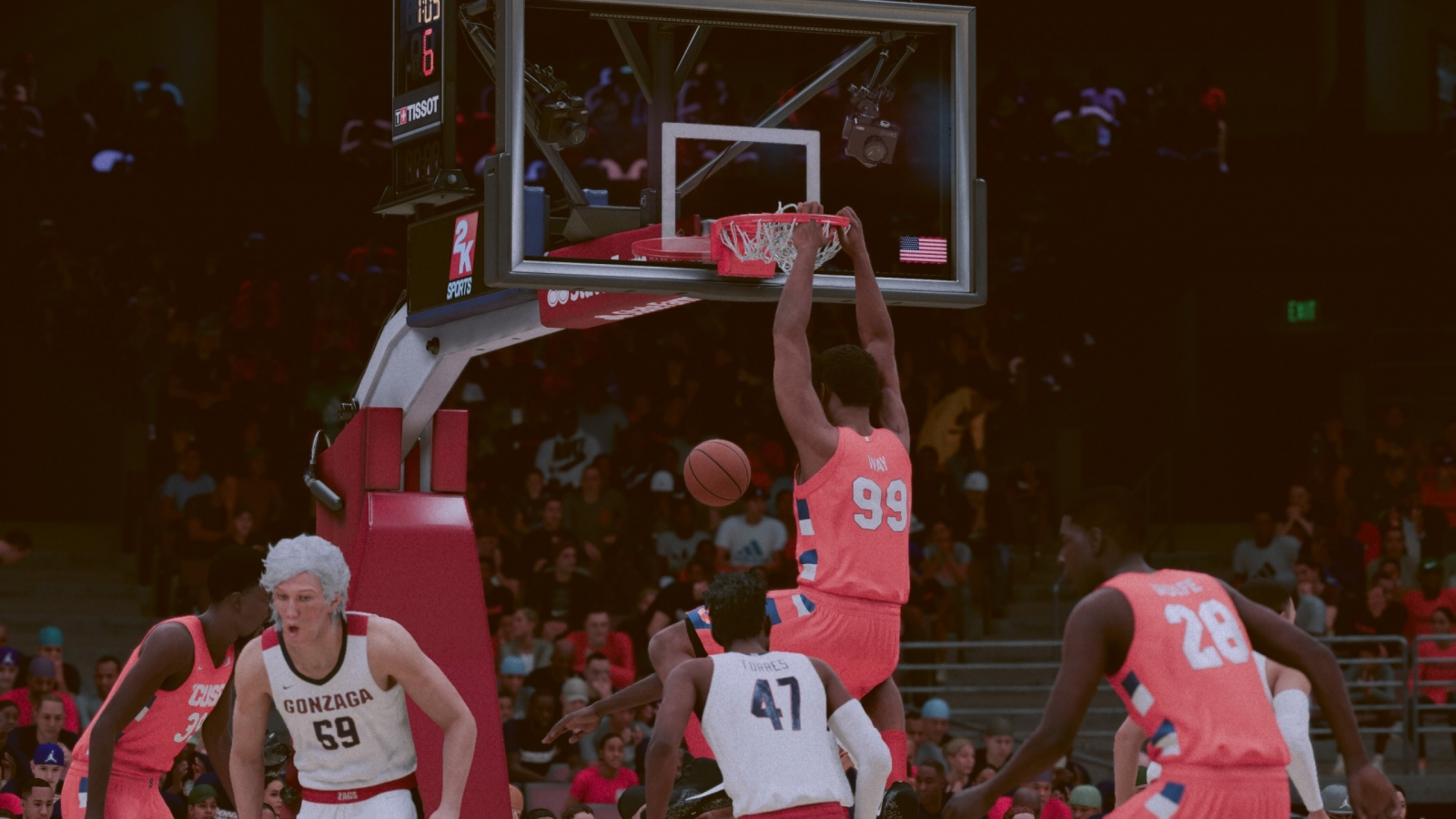 Let’s start with what’s actually good about the story mode: there’s a surprising amount of choice to it. Of course, nothing is really explained well, but you can go to college, enter the G-League, or just head into the draft straight away. There are plenty of side quests you can do to increase your attributes and fame all over the open world, which brings us to the far larger section: the bad.

I think this game might just be the worst performing on PS5. The game targets 60 fps, and while it remains there most of the time, there is a lot of slowdown. Like, most of the game is in slow-mo. The open world (simply called The City) is far too big with a ton of wasted space that makes the game chug 100% of the time. This mode is actually a pseudo-MMO, so you see other players around making the game slow down even more. It takes way longer to get anywhere than it really should, even when using speedier transportation options like the skateboard. Speaking of online functionality, you can’t actually play this SINGLE PLAYER MODE without an internet connection and a 2K account, which in my case meant recreating every 48 hours since their verification email won’t show up in my inbox. 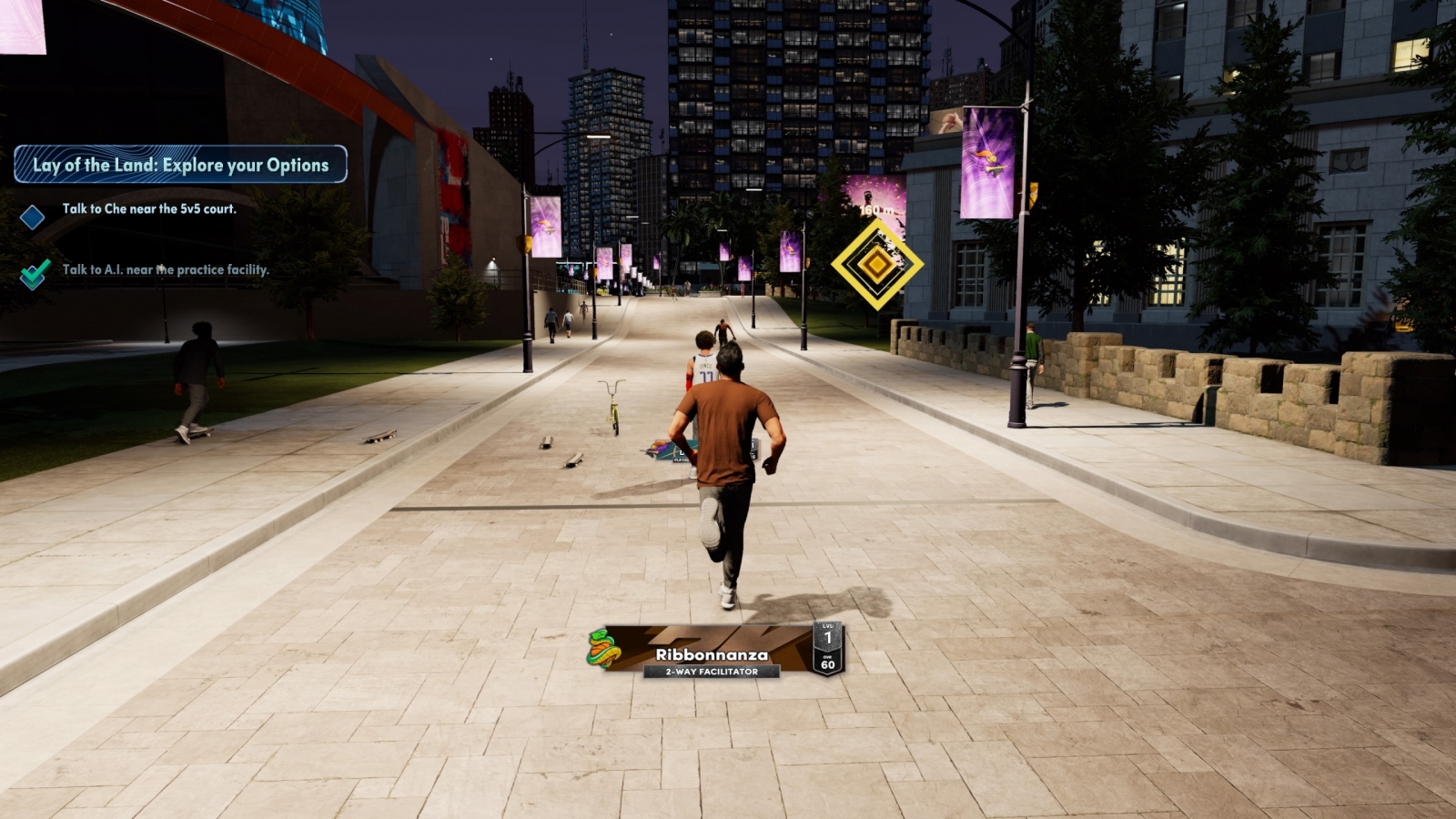 Most story progression, thankfully, takes place in your apartment where you live with your best friend Eric who will give you tips on what to do next. You can teleport here by pressing R1 in the open world, but loading between your apartment and the city takes what’s probably the longest loading screen, taking around 30 seconds, on the platform. Heading into a game takes less time, but still far more than it should running on an SSD. It’s about what I would expect on last gen consoles, and not absolutely abysmal, but the game is very likely to crash while loading the city and you’ll only notice that when you realize the game has been taking a very, very long time.

If all that didn’t turn you away, the story itself is pretty boring. While the writing is very realistic, characters actually talk like people most of the time, they sure use a lot of words to say absolutely nothing interesting or important. This campaign also only accommodates male characters, as women get their own mode tucked into the corner which is even more convoluted and boring. Mr, Basketball’s cousin, Missy Basketball, deserved better. Honestly, it doesn’t seem either are worth suffering through. 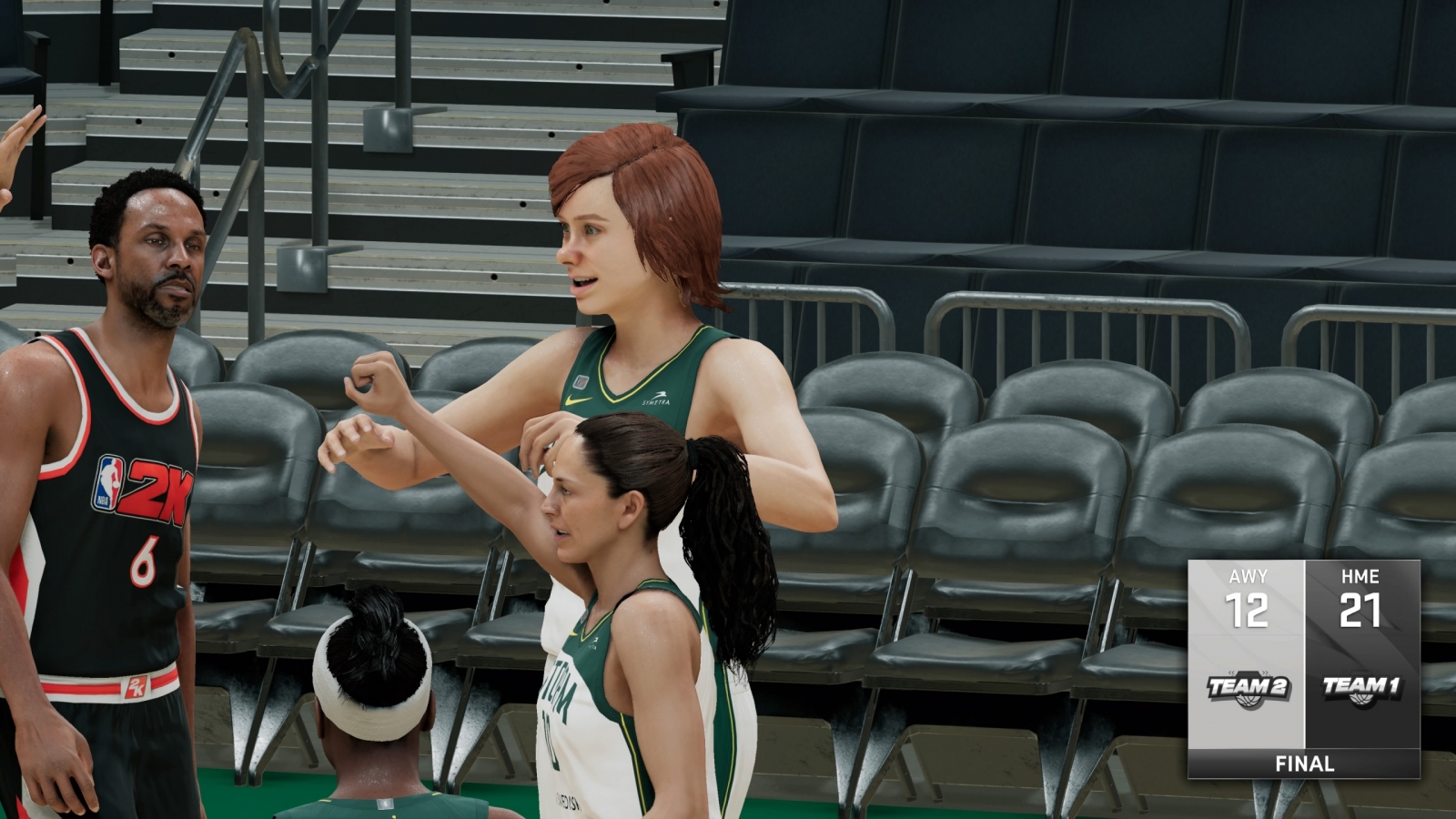 These yearly releases are clearly forcing the developers to rush out a barely acceptable product that somehow sells millions every year. My question for those who play these games is why do you tolerate this? For such a high profile brand, you should be asking for better, which means less rushed (and probably overworked) developers who can take their time to make a game they’re proud of. I went in with low expectations, but 2K22 couldn’t even meet those. It’s a game that is more concerned with advertising and promoting microtransactions than actually being a decent and fun to play video game.

All in all, 2K22 is definitely not designed for new players. There’s no in-game way to learn anything about the sport, they simply throw terms at you and assume you understand. Maybe I was looking in the wrong place, but I would expect a game about a sport to tell you how to actually play the sport, let alone how the culture surrounding it works. Unless you’re deeply familiar with Basketball or play these games literally every year, I’d give this one a pass.

NBA 2K22 is less a video game and more an advertisement for the sport. The controls are obtuse and unresponsive, slowdown is constant, the story is bland, and it’s simply not fun to play.

David is the kind of person to wear his heart on his sleeve. He can find positives in anything, like this is a person who loved Star Fox Zero to death. You’ll see him playing all kinds of games: AAAs, Indies, game jam games, games of all genres, and writing about them! Here. On this website. When not writing or playing games, you can find David making music, games, or enjoying a good book. David’s favorite games include NieR: Automata, Mother 3, and Gravity Rush.
Related Articles: NBA 2K22
Share
Tweet
Share
Submit