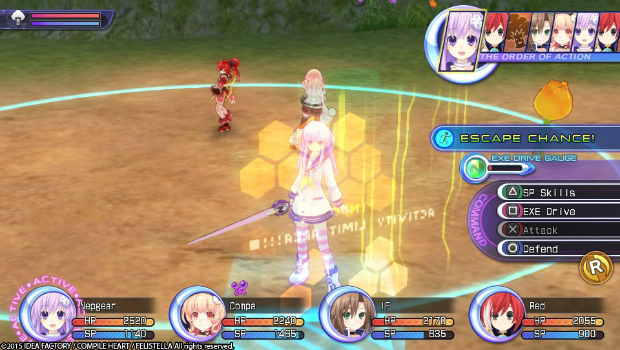 There is a very thin line between acceptable mediocrity and dull uselessness, and being on the fence is not a position that you want to find your game in.  Unfortunately for Idea Factory International, that’s exactly the zone you’ll find Hyperdimension Neptunia Re;Birth 2: Sisters Generation, the latest in the Hyperdimension Neptunia series.  Like a freemium game without the microtransactions, Sisters Generation plays at a just fun enough level to keep you going, but never really picks up the pace in terms of gameplay.  The game gives way to stagnation in a patternistic flow of running, pressing x, and reviewing numbers.  Sisters Generation manages to stay on the fence of perfect average mediocrity by featuring a nice storyline and some fun concepts, both in world exploration and in battle.

Hyperdimension Neptunia’s trademark feature is a world designed to be an inside joke for RPG designers, fans, and developers.  While I wasn’t familiar with this when I started the game, it immediately became evident that this is the true of this series.  It’s really great.  The world, “Gameindustri,” is designed around gaming mechanics and terminologies, with characters named “Ram and Rom,” a handheld gaming device that acts as your menu, and the special power capacity being measured in megabytes.

Sisters Generation tells the tale of Gameindustri in shambles, a world on the brink of destruction due to the rise of a terrible group known as ASIC, or the Arfoire Syndicate of International Crime.  ASIC has taken on the minds of many students and others in the world, and these worshippers, known as “shares,” provide some sort of mystic powers upon their holders.  Our heroes, a tomboyish young raggamuffin named IF and a clumsy, silly girl named Compa, are on the case, trying to locate and rescue their friends.  They manage to save one, a powerful mystic warrior princess named Nepgear, but they are forced the leave the others behind.  To get the power they need to face ASIC and rescue their friends, our crew must work to restore shares to the other cities.

I’m not doing justice to the rather surprising complexity to the story in this game.  While the dialogue itself isn’t really that great, the overarching storyline and witty writing dominate and really stand out.  It’s not often that a modern RPG takes the time to focus on the writing of the story over the gameplay.  The benefits of it are found throughout the story of the game.  Unfortunately, the drawbacks of that laser focus is found in basically all other facets of Sisters Generation.

Map exploration is a total drag.  The worlds are extremely linear and very small.  They aren’t really poorly designed, but there is a total lack of true exploration options.  The drag of the boring worlds is multiplied by the game’s very slow levelling system.  While I approve of that concept (many RPGs today make it way too easy to level up and advance) being forced to walk the same virtual hallway over and over again is no way to have fun.  While it’s nothing new, the developers have a bad habit of replacing visual indicators of action with little diamond shaped activators that say “event” over the top.  Combine all of these elements and you’ve got a functional but boring form of getting around, and that’s how you’ll spend the majority of this game.

The battle system leans more on the positive side, but still drags like most everything else in Sisters Generation.  The game introduces the small-arena and free movement elements of action RPGs within a basic strategy fighting system, and the results are quicker strategy battles that heighten the pace, but lack in any troop placement or spatial elements.  Basic attacks are performed three at a time.  The battles are fun at first but drift towards repetitive as the time spent in one area rises.  There’s nothing special to praise, or any real drawback to call out, a perfect example of this game’s foothold in the thickest section of the mediocrity bell curve.

Hyperdimension Neptunia Re;Birth 2: Sisters Generation is a much more interesting concept, not to mention name, than it is an interesting game.  While the game’s meta, world-within-a-world inside gamer’s joke is a good enough idea to run with for several hours of gameplay, the gameplay itself is droll and draggy, refusing to step up to the task to being fun or compelling.

While certainly not a terrible release, Sisters Generation doesn’t stray far enough outside the box it lampoons to be considered a good game either.  This game is only for dedicated fans of the series, or RPG gamers starving for a new game to fill in the gaps.

Patrick Rost has been with Gaming Trend since 2013. At first focused on sports coverage, Patrick has gone on to cover a wide range of games and other products for the website. Outside of Gaming Trend, Patrick writes and records music, grinds perpetually in Elder Scrolls Online (PS4), and lives day to day with his two dogs, Bob and Stella.
Related Articles: Hyperdimension Neptunia Re;birth 2: Sisters Generation
Share
Tweet
Share
Submit