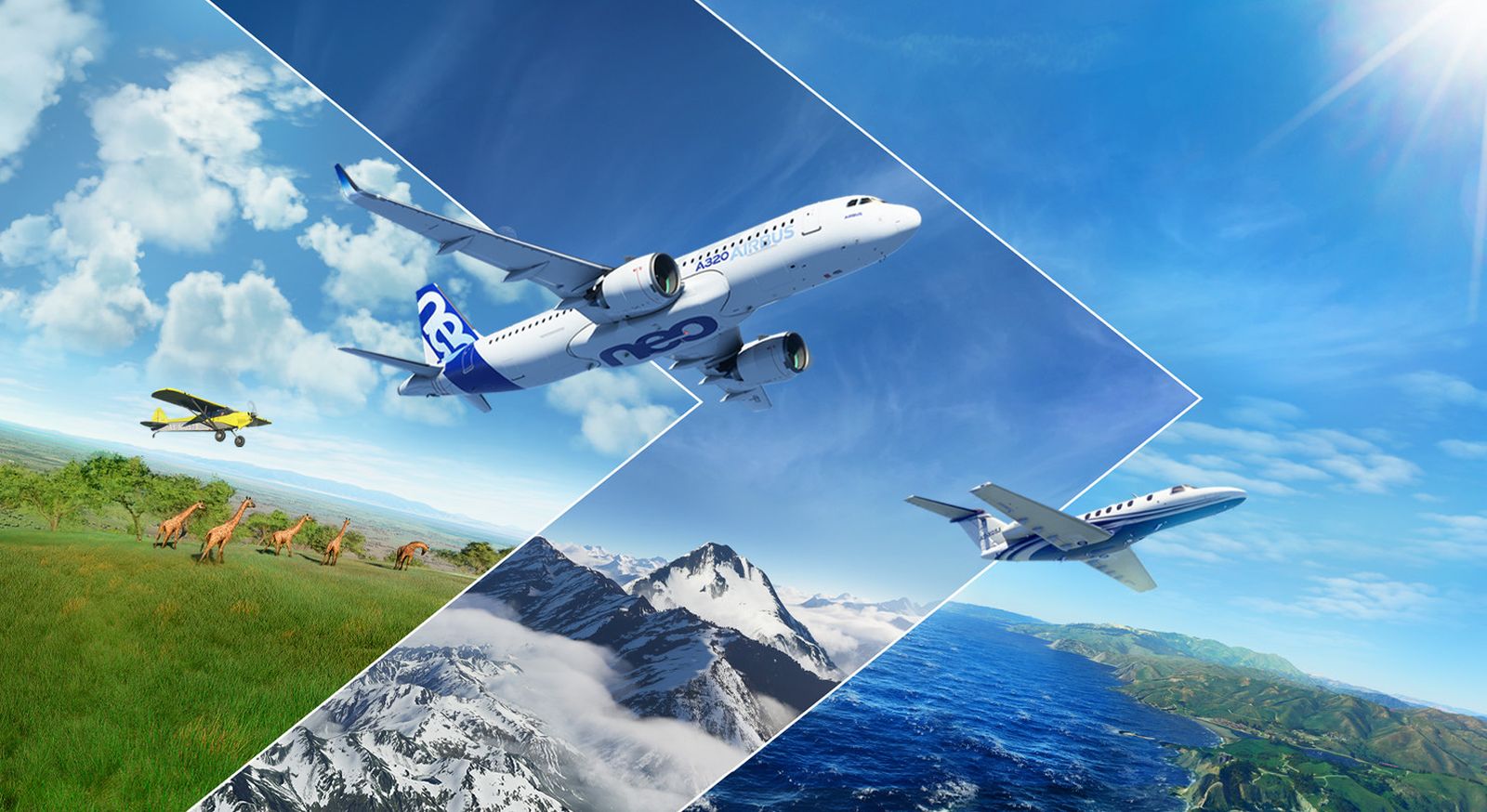 Leonardo Da Vinci once said “Once you have tasted flight, you will forever walk the earth with your eyes turned skyward, for there you have been, and there you will always long to return.” and he was right. I served in the Air Force, and once I’d taken to the skies, I couldn’t imagine my life without flight. I’ve taken lessons, gotten to go on hops, and even a few private jets, but that’s not my normal life. Now, I have to enjoy my life in the sky virtually — something obvious by the amount of VR gear adorning my office. When Microsoft and Asobo Studio (yes, the folks behind the games The Crew 2, A Plague Tale: Innocence, and the freshly-announced A Plague Tale: Requiem, to name a few) announced that they’d be bringing Microsoft Flight Simulator to modern platforms, I could hardly wait. I reviewed it on PC and declared it absolutely perfect in my review, and my view has not changed. Now Asobo has brought the game to the Xbox Series X, and once more we slip the surly bonds of Earth. Could this be the truly next-gen experience we’ve all been waiting for?

Microsoft Flight Simulator on the PC took a whopping 170 GB of space for a final installation size. Asobo’s first improvement was to make it more palatable, and they succeeded. Cutting down by over half, the Xbox Series X version is just 83 GB. Many of these improvements are headed to PC as well, but it’s great to see a more slim and trim install size for the comparatively space-constrained console platform. Either on install, or after the fact, you can also perform an additional install to play the game in “offline mode”. Understanding why you might want to do this means taking a peek behind the curtain of how Microsoft Flight Simulator delivers such a stunning and accurate world representation.

When Microsoft Flight Simulator has unfettered access to the Internet it can pull in a metric ton of telemetry data, real-time air traffic, live weather, photogrammetry, and more to make the game into a living, breathing, representation of the world around us. Offline, as the name suggests, allows the world to continue to spin with dynamic weather and such, but without the benefits of a live connection. All of this is accomplished with a meteorological service called Meteoblue.

Meteoblue works directly with the U.S. National Oceanic and Atmospheric Administration, as well as the National Centers for Environmental Prediction to collate an incredible amount of environmental data. Wind speed, humidity, pressure, temperature, satellite data, precipitation, and a massive laundry list of additional data points come together to deliver the most accurate and realistic weather we’ve ever seen. Better still, if you’ve enabled the live streaming portion, it’ll match precisely what the world is experiencing in that area at that time. Tied directly into the multiplayer aspects of the game, this also means that everyone’s weather is synchronized. Every wind shear that rattles your plane with turbulence is affecting everyone else simultaneously. It’s truly amazing to behold, but it’s not just cosmetic — all of this data can affect the 1000+ flight and control surfaces on each plane, making that data not only useful, but something you’ll have to plan around to have a safe and smooth flight. 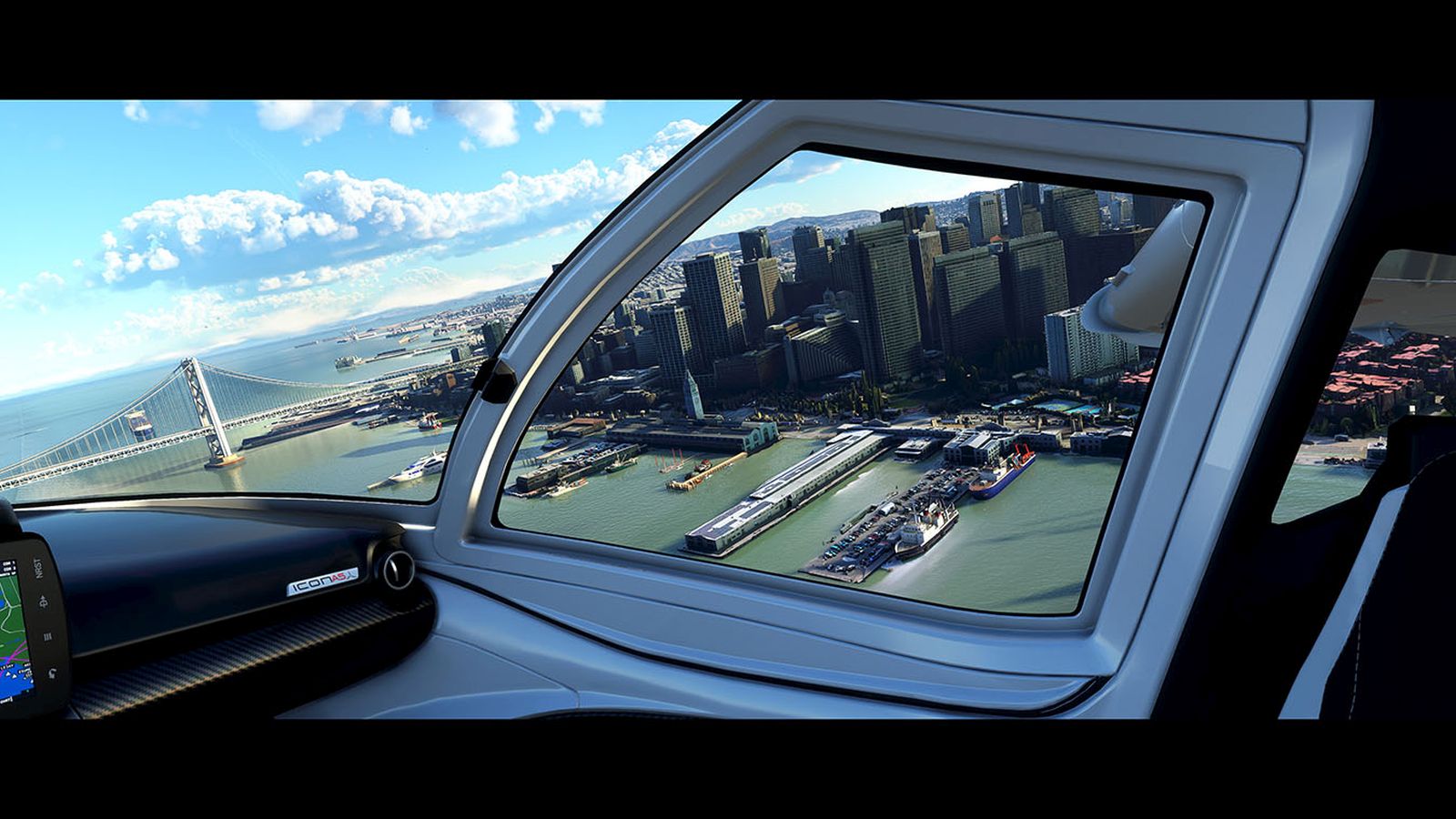 How is this a screenshot? HOW?!

With all that additional data, photo-perfect planes, and over 37,000 airports, with more of both being added all the time, how does the Xbox Series X handle the game, given that it’ll push even the most stalwart computer to its knees? Surprisingly well, actually. Dynamically adjusting resolution and level of detail slightly (though not enough to be noticeable unless you are looking for it), the game aims for and manages to keep 30fps consistently. It ensures that anywhere you are flying, including complex and densely populated cities, will be smooth as glass, even at 4K resolution. The results are, put plainly, the best looking game on the Xbox Series X to date. Putting them side-by-side with the PC version reveals minor differences here and there, but it’s easily on par with what a mid-range RTX 3070 could deliver, albeit with a lower framerate.

Microsoft Flight Simulator on Xbox Series X is absolutely gorgeous from head to toe. The last year’s worth of improvements have resulted in a higher-fidelity world, and a smoother experience overall. The streaming technology has gotten even better, and the use of dynamically updated photogrammetry means that Asobo (heavily rumored to be the next in Microsoft’s impressive recent acquisitions) can continue to improve every aspect of their simulated planet Earth post launch. 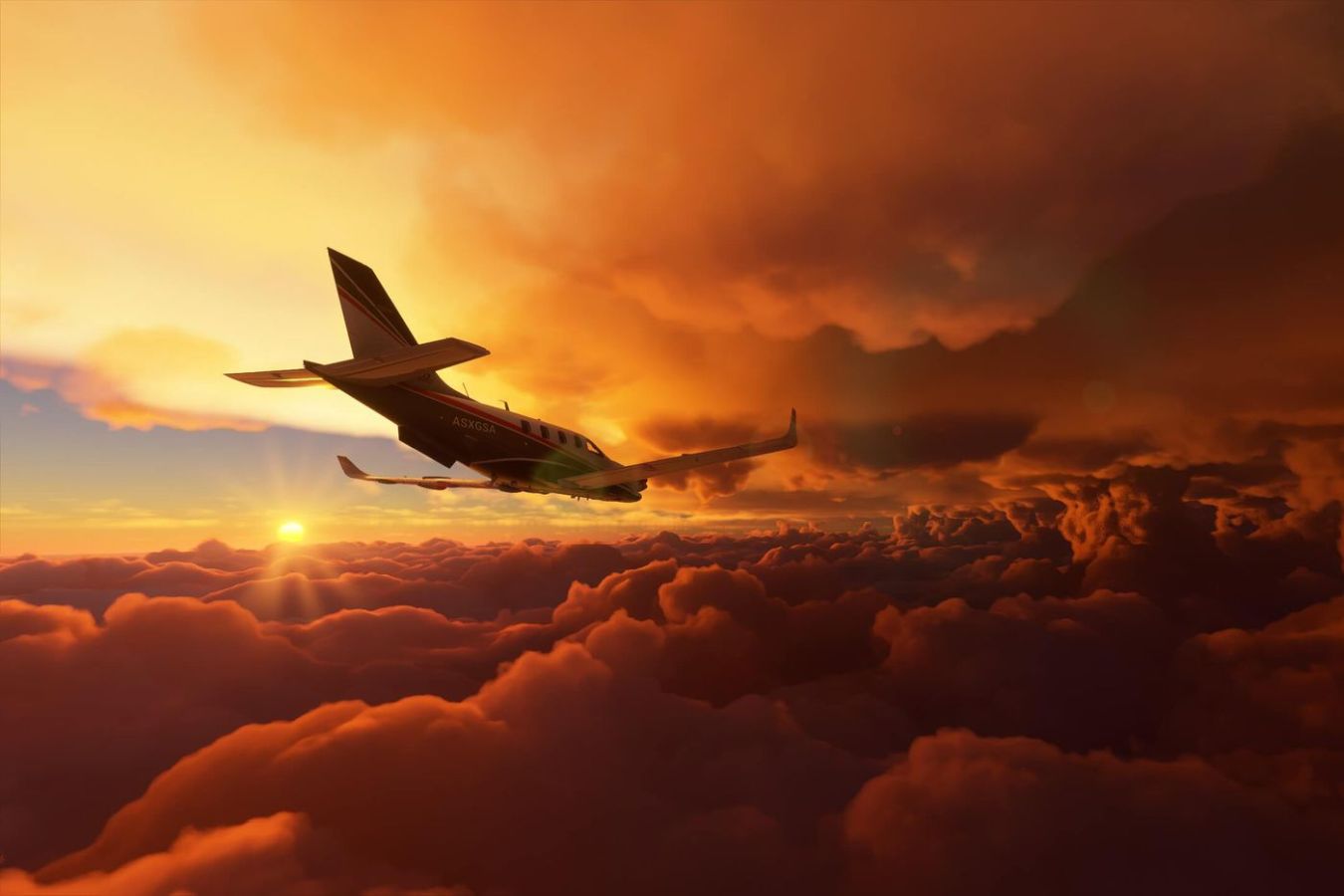 This game is absolutely gorgeous.

There’s only one area of Microsoft Flight Simulator that might feel out of place — using a controller. Flight controls can be complicated, made more so by Asobo having adapted so many things to the limited number of buttons on the Xbox controller. What they have works, but it’s no replacement for a keyboard and mouse, or a HOTAS like my Saitek X-56. That said, there are options that’ll make your experience more realistic.

The Xbox Series X supports a mouse and keyboard, and it transforms what can be a somewhat clunky experience into one that’s far easier to handle. Buttons aren’t pulling double duty, and slight movements on the mouse translate far cleaner than a thumbstick. Keys on the keyboard give more room to breathe, and that’ll really show during graded challenges. Accidentally jamming on the rudder pedals on the controller will net you a C grade really quick, but being able to keep everything separate will have you pulling an A in no time.

The second, and frankly far superior choice, is the Turtle Beach VelocityOne Flight Universal Control System. This setup has 180 degree yoke rotation, 7 engine control axis, rudder controls, a flight management display, and even an array of lever handles to swap out to match your favorite plane. To say I’m chomping at the bit to get my hands on this baby is an understatement, so stay tuned. It’s $349 with a near-term but nonspecific release date, we’ll have to wait a bit to see it for ourselves. In the meantime, enjoy this sizzle reel to see it up close.

There are several modes to tackle in Microsoft Flight Simulator, but they do serve as a reminder that the title is accurate — this is a simulator. Flight School is here, teaching you the basics of flight before you try your hand at a solo flight, with a few additional tutorials based on player feedback. There are Landing Challenges which put you in the cockpit at some of the most challenging runway approaches in the world. Bush Trips are the famous supply runs to places like Anchorage Alaska, both beautiful and challenging as you rely on landmarks and instruments more than anything else. You can jump up to a far larger airframe, but that rounds out the content. You can hop in a plane and fly around the world in free flight with the planes included, and they are shockingly accurate according to real-world pilots who have tested them. What you won’t find is crazy arcade-like gameplay and the like. You can’t bank a plane like Grand Theft Auto 5 and do crazy stuff, because that’s not what this is all about.

Microsoft Flight Simulator is easily one of my favorite pastimes, and with the right control surfaces, it can also be a real-world tool to help you understand the fundamentals of flight that can directly translate to flight school. Now you can have that experience without the need to fight with drivers, impossible-to-find graphics cards, or juggling a dozen graphical options to keep things smooth. What Asobo has accomplished is nothing short of extraordinary, and what they’ve delivered is easily the most graphically impressive game the Xbox Series X has to offer.

Free from graphics cards, drivers, and other PC trappings, Microsoft Flight Simulator is the most accessible flight simulator ever made. With the most minor of concessions, it also manages to be the best looking game the Xbox Series X has on offer to date. With the right control surface, you too can slip the surly bonds of Earth, and when it looks this good and plays this well, I highly recommend it.

Ron Burke is the Editor in Chief for Gaming Trend. Currently living in Fort Worth, Texas, Ron is an old-school gamer who enjoys CRPGs, action/adventure, platformers, music games, and has recently gotten into tabletop gaming. Ron is also a fourth degree black belt, with a Master's rank in Matsumura Seito Shōrin-ryū, Moo Duk Kwan Tang Soo Do, Universal Tang Soo Do Alliance, and International Tang Soo Do Federation. He also holds ranks in several other styles in his search to be a well-rounded fighter. Ron has been married to Gaming Trend Editor, Laura Burke, for 21 years. They have three dogs - Pazuzu (Irish Terrier), Atë, and Calliope (both Australian Kelpie/Pit Bull mixes).
Related Articles: Microsoft Flight Simulator
Share
Tweet
Share
Submit