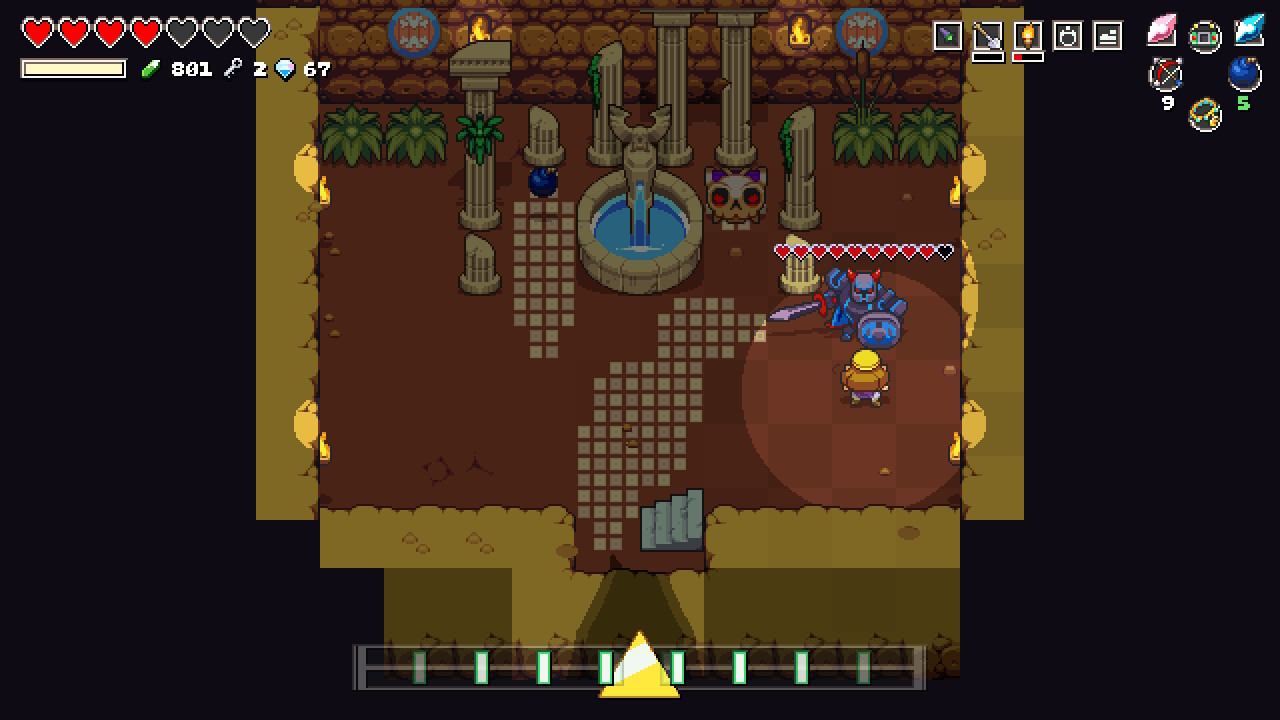 Cadence of Hyrule caught a lot of people off guard when it was announced in March. After all, who could have predicted a new Legend of Zelda game that was not only in a completely different genre from the rest of the series, but also developed by a relatively obscure indie team? Then at this year’s E3, we got another surprise announcement, albeit a much more predictable one: Cadence of Hyrule would be out in just a few days. Perhaps the final surprise came when we got our hands on the game. What could have been nothing more than a reskin of Brace Yourself Games’ Crypt of the Necrodancer is actually an entirely novel roguelite-rhythm fusion that puts its own exciting spin on The Legend of Zelda’s adventure format.

If you’ve never played Crypt of the Necrodancer, it’s a fun but notoriously difficult roguelike crossed with a rhythm game. Like old-school roguelikes, it’s played on a grid where you can move one space at a time and essentially bump into enemies to attack them. What sets it apart is that you’re meant to move in rhythm with the soundtrack (and penalized for not doing so), while working around your enemies’ similarly rhythm-based attack patterns. 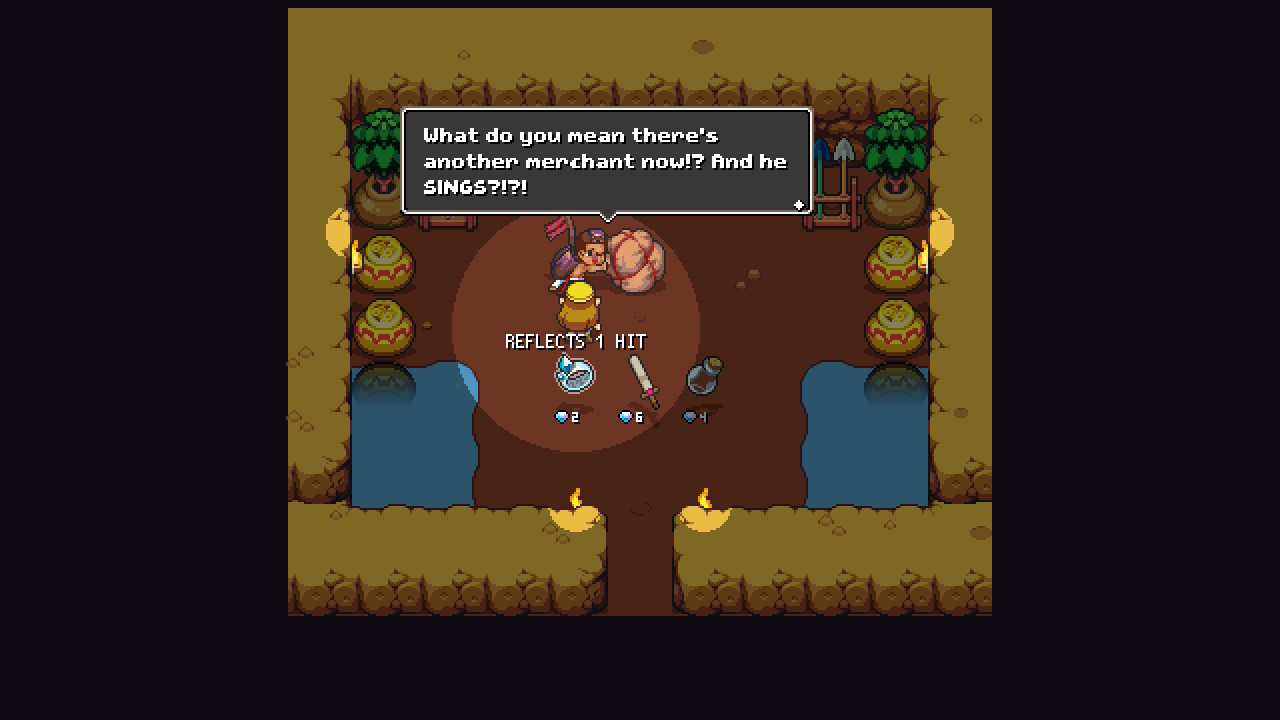 Cadence of Hyrule takes all of that, along with Necrodancer’s protagonist, Cadence, and transposes it into a Legend of Zelda game. Where Cadence of Hyrule differs, though, is that it’s much less run-based. Where Necrodancer had a perma-death structure where you tackled a series of dungeons to make it to the final boss, starting from scratch each time you died, Cadence of Hyrule carries most of your progress over between runs. You lose your rupees and some items when you die, but you keep another form of currency, diamonds, along with any weapons and upgrades. Your progress through the game is also saved, so you’ll never have to complete the same puzzle or beat the same boss multiple times.

I found the structure of Cadence of Hyrule much more satisfying than Crypt of the Necrodancer, which I eventually walked away from when the moment-to-moment stress and the frustration of replaying sections eventually grated on me more than the fun gameplay kept me hooked. To put it simply, Cadence of Hyrule feels like a Legend of Zelda game, not like another game just cosplaying in its green tunic. Plus, you can choose to play as Zelda or Link from the get-go, a common request to fans that even Nintendo hasn’t granted yet, despite dangling it in front of us for years. 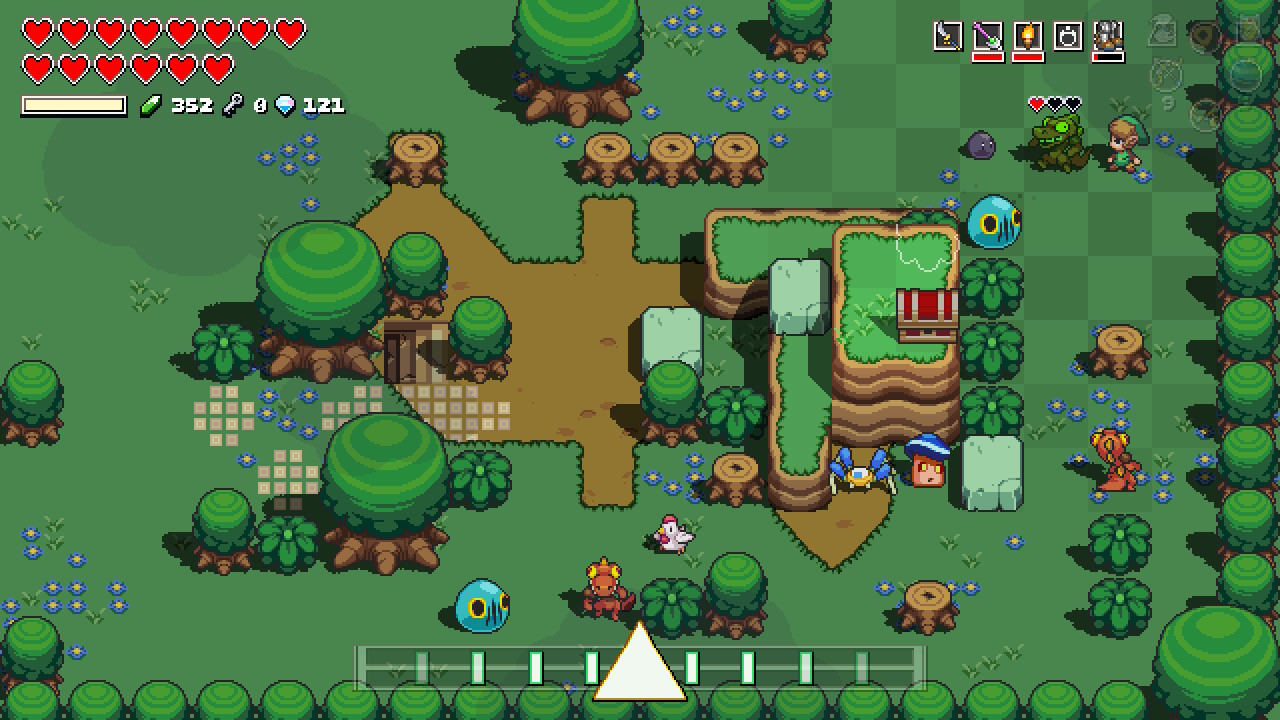 Since so much of your progress carries over between runs in Cadence of Hyrule, dying isn’t actually that stressful. Which is helpful, because you’re going to die a lot, at least in the beginning. Especially if you haven’t played Crypt of the Necrodancer or don’t play many rhythm games in general, the entire idea of moving to the beat can be incredibly difficult to get used to. You’re not just making simple timed button presses, either. Each enemy type has its own unique attack pattern, so you’re keeping track of how each one will move, looking forward to where your next move will place you relative to them. One enemy might move diagonally on every third beat, while another might stand still for two beats then spend the third beat charging an area-of-effect attack that hits on the fourth. As you’re working around these patterns, you’re also considering the options afforded by a huge list of special items, and doing that all a few times per second while timing your inputs precisely to the song you’re hearing. Oh, and that song’s tempo can also speed up or slow down in the middle of a battle.

Interestingly, Cadence of Hyrule gives you the option to turn that central rhythm mechanic off completely. When you start a game, you can choose “fixed beat mode” to play a turn-based version of the game, where you have as much time as you need to move and enemies stay frozen until you do. It’s great for people who are deaf or hard of hearing, or who just struggle to stay on beat, and actually serves as an interesting twist on the game even if you’ve played through once with the rhythm mechanic turned on and just want to try something different on a second playthrough. 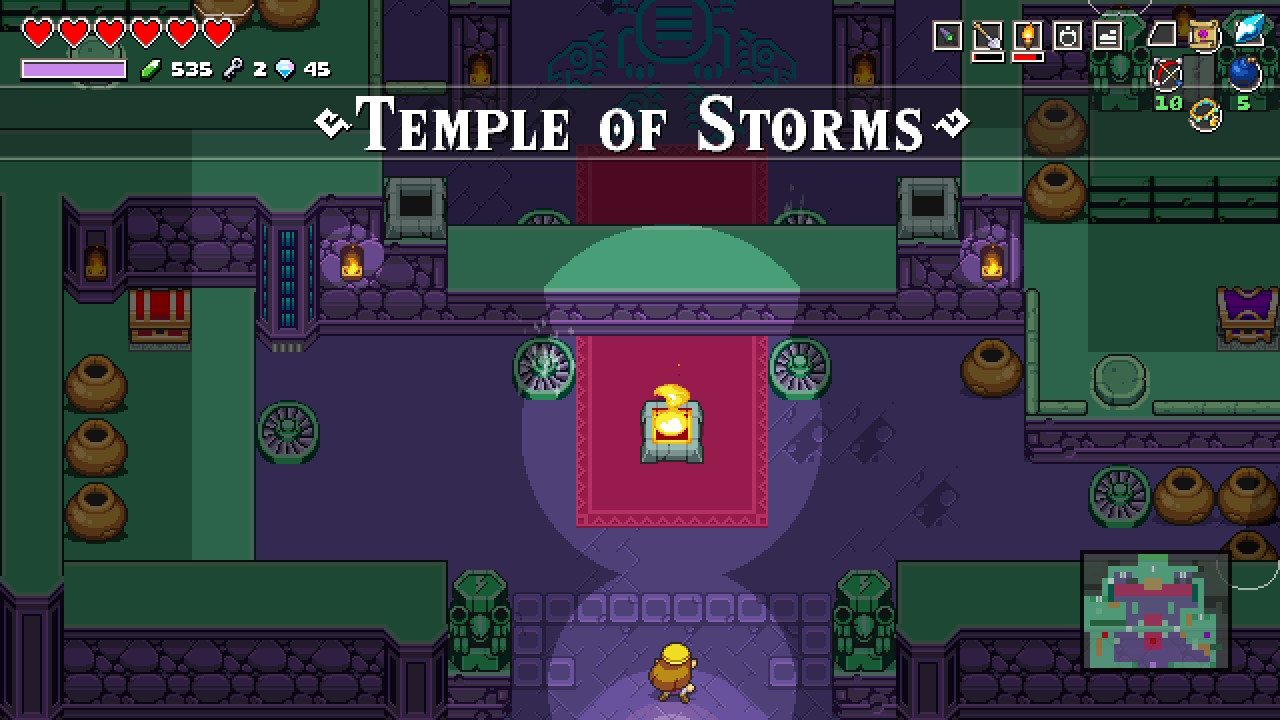 Even having played a bit of Necrodancer, I found Cadence of Hyrule to be completely overwhelming for the first couple of hours. I had to take frequent breaks just to give my brain a rest and still found myself thinking in time to the last song I’d heard. I died over and over, and was pretty convinced that I just wasn’t capable of playing the game. But then, at some point, something clicked. You don’t learn how to play Cadence of Hyrule as much as you internalize it. Even having beaten the game, I couldn’t tell you what most of the enemies’ patterns are, but if I picked it up again, I could respond to them. Cadence of Hyrule gets under your skin in a way that most games don’t, throwing up a challenge that seems impossible to figure out rationally, until it suddenly becomes completely intuitive. And when it does, it combines the satisfaction of a rhythm game and that of an action-adventure in a way that’s just purely joyful.

All of that also comes wrapped up in the dressing of a Legend of Zelda game, complete with returning characters and familiar locations. And of course, the music. If Cadence of Hyrule’s music were anything less than stellar, it would torpedo the whole game, but fortunately, it clears the incredibly high bar that it sets by a mile. The game’s score is full of excellent remixes of classic Zelda songs turned into more danceable versions, with a surprising variety spanning from guitar-shredding rock to twangy bayou banjos. 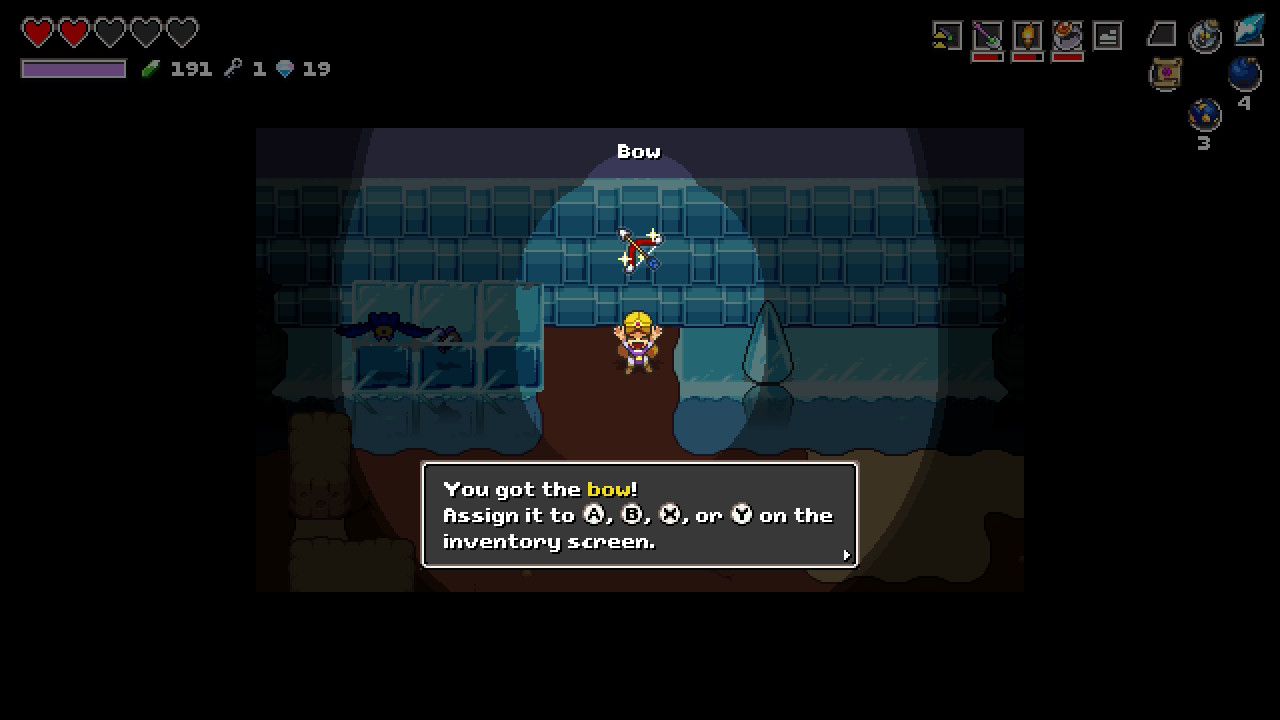 Cadence of Hyrule also puts a great twist on another Legend of Zelda staple: dungeons, which are generally just a few rooms long, but packed with intense battles and clever puzzles that will put both your rhythm and your ability to make clever use of your items to the test. Each one is also topped off with a tough boss based on a different instrument that require distinct strategies to beat.

This is absolutely a game that you need to play to really get how good it is. There are plenty of features that sound fun enough, but it isn’t until you put it all together and get into the groove yourself that it fully makes sense. 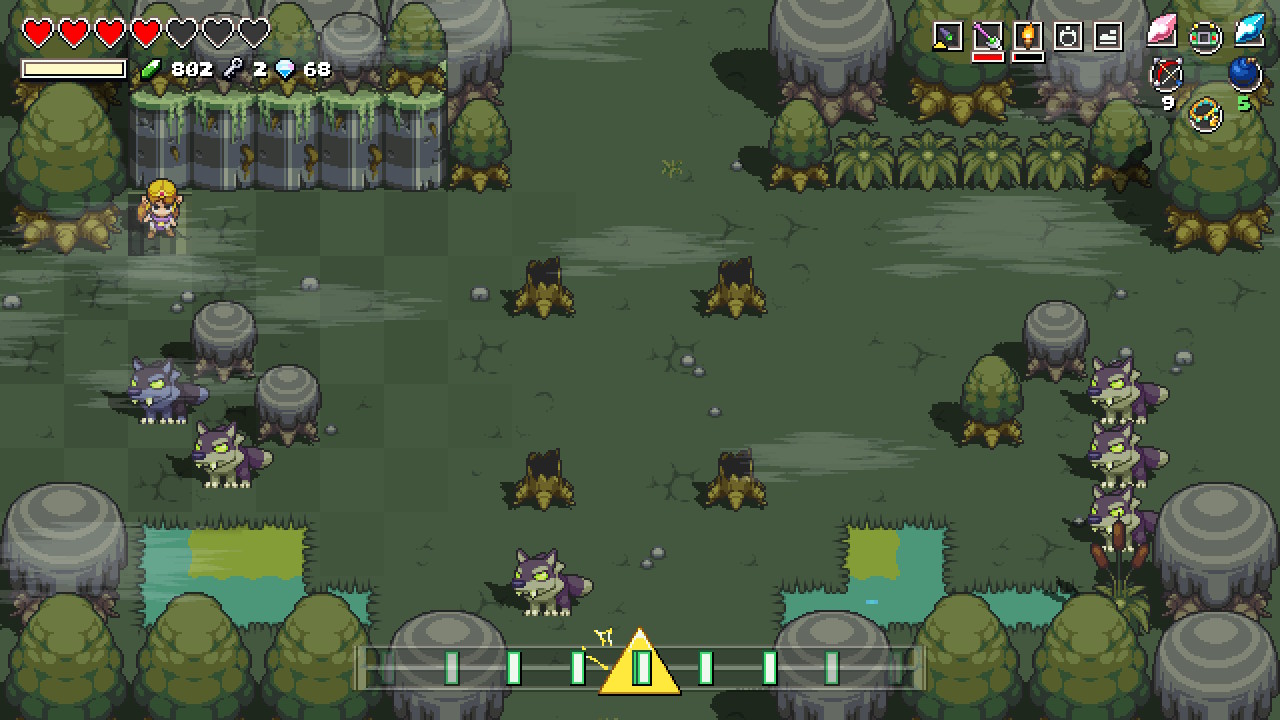 Like any game, it has a few issues. It’s on the short side, and can easily be beaten in a couple of long play sessions (though to be honest, I’d prefer that to a bloated game that wears out its welcome early), and you progress mostly by just wandering around the map until you run into a dungeon. The difficulty curve is also a bit harsh. My opening hours with the game felt nearly insurmountable, followed by a nearly deathless middle section once I had a couple of health potions, then a brutally difficult final dungeon. In the most difficult sections, it became almost impossible to keep track of everything going on, so I often resorted to just smashing into enemies with the strongest weapon I could and hoping for the best. These quibbles don’t come near dampening my enthusiasm about the game though. If you’re the slightest bit interested in The Legend of Zelda or rhythm games, Cadence of Hyrule is absolutely worth your time.

Cadence of Hyrule is a perfect blend of classic Legend of Zelda adventure with roguelite rhythm gameplay. It’s a short adventure that can sometimes feel too difficult and chaotic for its own good, but it’s worth sticking through to the end. Not only is it a tremendously fun game, its new take on Hyrule is a joy to explore.

A committed indoor kid, Bryan moved from Pittsburgh to Los Angeles for a prettier landscape to ignore. They can be lured outside with promises of taco trucks and film festivals, and enjoy trawling through used book stores for works on the occult. Bryan has been gaming since the SNES era and is a sucker for good pixel art.
Related Articles: Cadence of Hyrule
Share
Tweet
Share
Submit