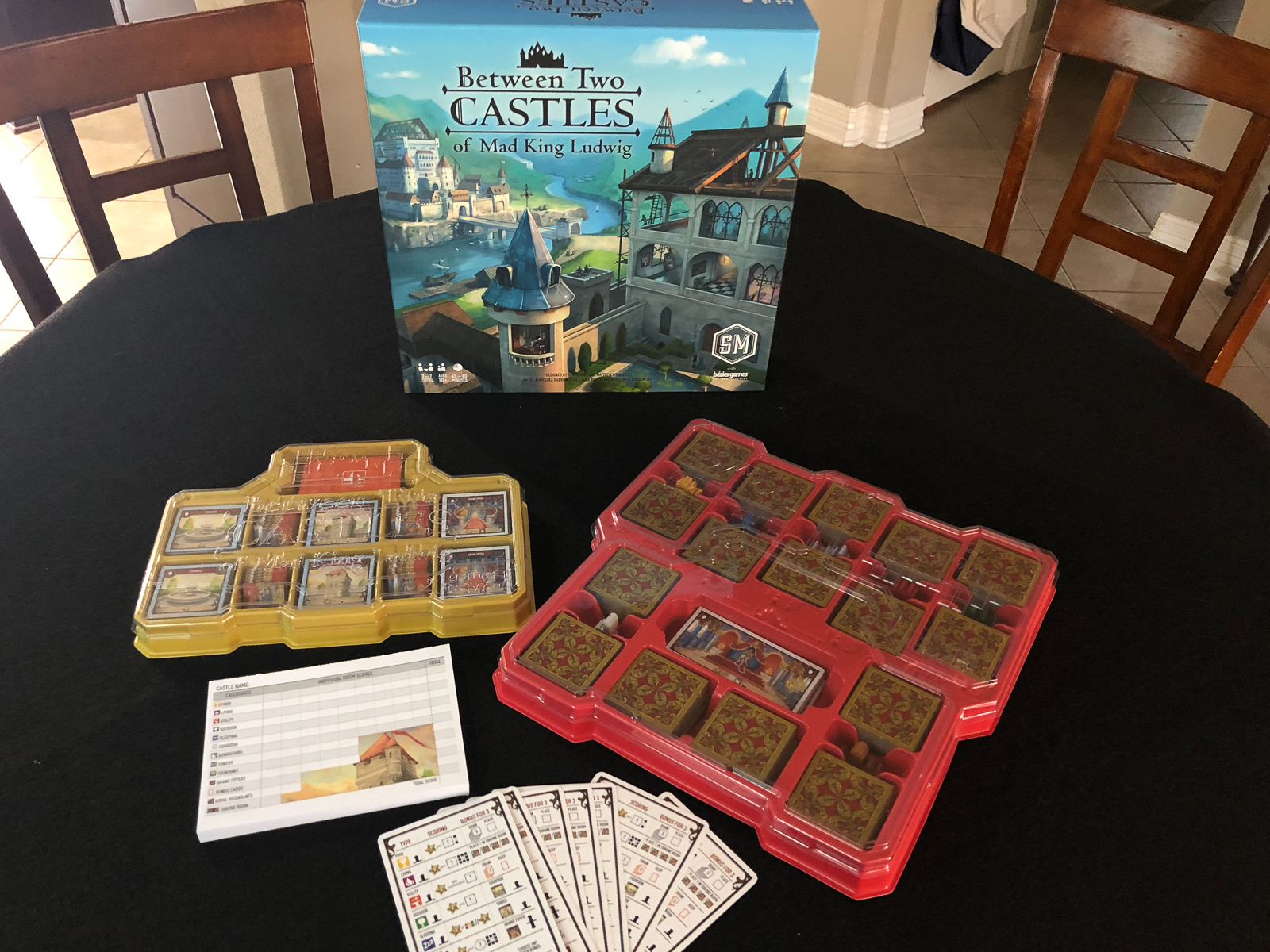 Have you ever wanted to create your own castle? Finding a way to live in one of those magnificent structures was a dream to many in the past, and continues today in the form of mansions. Castles typically were home to royal families, and comprised many elegant rooms, making them a symbol of wealth and power. Between Two Castles of Mad King Ludwig by Stonemaier Games gives you a chance to build your own, with the goal of making the best castle you can.

Between Two Castles of Mad King Ludwig revolves around players using tiles to build castles with the goal of getting the highest score they can. To start off, one throne room tile is used to fill the gap between each player involved. Each player will have two throne rooms nearby: one on their left, and one on their right. They will be tasked with building two castles, working together with the player on the other side of each throne room. This requires you to be able to multi-task and plan out two separate castles. One castle would be a little easy, but two castles challenges the players to think on their feet and build strategically. I really liked this aspect, and is one of the reasons I wanted to play this game.

Seven small wooden castles are included, and each throne room is given a castle when the game starts. The wooden castles don’t have any impact on the game, but they’re a nice little visual to have when playing. Once set up, each player grabs nine tiles to form their hand. From there, they decide which two tiles they want to use this turn. On the first turn, they may want to consider what special bonuses the throne rooms they’re working on have. The throne rooms get points for having specific rooms placed next to them in specific spots. For example, a throne room might get two points for each corridor or sleeping room above it or on its right. This may prompt the player to use one of those types of tiles first in order to get some points.

After deciding what tiles to use, they place them face down. They then place their hand beside the castle to their left. Once everyone is done deciding, they all flip their tiles together. The players figure out which tiles they want to use on which castle, and they must work with their partner in order to determine that tile’s placement. Two tiles get added to each castle on every turn, one from each of the two architects of that castle. These decisions might happen quickly, but in many cases it will take a few minutes. Just like the throne rooms, the normal room tiles earn points depending on certain criteria being met. Sometimes it’s based on specific room types being nearby, other times it’s based on the number of a certain room located anywhere in the castle. For example, a room could earn one point for every nature tile in the castle, no matter the location.

After all the choices are made and the tiles are placed, each player grabs the tiles that were recently placed to their right. Now, they must repeat the previous steps with the seven tiles that they received from the player on their right. This turn is played out, and the cycle repeats. Once each player is down to only one tile, they discard it from the game and grab a new hand of nine in order to start round two. The turns play out the same as before, but round two has players move their hands to the right instead of the left. Being forced to give up your hand at the end of every turn and then having to use a brand new, more limited hand adds an extra challenge. This forces players to adapt and plan their moves more carefully. Just because you have a sleeping room that will help you rack up some points now doesn’t mean you’ll get one in your new hand, so you need to decide if it’s your best option at the time. I had a few moments where I wished I could’ve kept certain tiles for longer.

In addition to the tiles and their point values, there are also extra bonuses. When you’ve placed three of a specific type of room into your castle, there is a designated action you must take. In some cases, it could be placing a special tile in your castle, such as a tower, fountain, or grand foyer, while other times it might be grabbing one of the bonus cards from the stack. The bonus cards offer extra points that will vary depending on how your castle is set up. For example, one of the cards gives you two points for every workshop room in your castle. There are also attendant tiles that can be obtained from having three of a specific type of room in your castle. They also give more points based on certain criteria, which usually involves counting how many of a certain type of room you’ve built. There’s also a bonus of having five of a type of room, but anything after that offers no bonuses. All in all, tiles essentially gain their point values based on the number or location of other tiles in the castle. This may sound confusing at first, but once you get into the swing of things, it gets easier to understand.

Once round two is over, it’s time to count up each castle’s score. The box contains a stack of scorecards, which is helpful for the end of the game. When both castles a player worked on have their scores tallied, that player takes the lower score as their personal score. The player with the highest personal score is the winner. There’s a lot to add up and take into account, so make sure to pay attention and make sure you’ve followed all of the steps correctly. Bonuses can be missed if you aren’t paying attention, and they can be the difference between winning and losing. One game can take around 45-60 minutes depending on how many players are involved and how much discussion there is.

The game is designed to be played with three to seven players, but it can be played with a two-player variant. In that situation, both players will also be working with Ludwig, the invisible player that helps round out the roster. Instead of choosing which tiles to use like normal, the players choose the tiles randomly. This is meant to simulate the fact that you wouldn’t know what tiles the other players have chosen to use that turn until everyone revealed them at the same time. I appreciate this option for when only two friends can get together to hang out and play games.

Between Two Castles of Mad King Ludwig is wonderfully made, both in terms of the production value of the contents, and the way the game plays. The tiles feel sturdy and seem like they’re made to last a good while. The art style of the characters, rooms, objects, and backgrounds on the tiles is fantastic. It encompasses the medieval feel of the world the game is meant to be set in. The game itself is a bit confusing at first, since there’s a lot to take in and learn, but it doesn’t take too long to get into the swing of things. Once you understand the flow of the game, the rules, and the bonuses, you’ll be spending more time focusing on your strategy than figuring out how to proceed. It’s a great game for a group of friends looking to challenge themselves and give their brains some exercise. So grab some fellow architects and get to building!

Between Two Castles of Mad King Ludwig is an intriguing, entertaining board game that revolves around building castles with tiles. Working on two castles at the same time with two different partners adds a challenge that forces you to multi-task. Having to swap hands every turn requires you to adapt and plan strategically. It may be a lot to take in at once, but it's worth it once you learn the rules and flow.

Codi loves to play video games and watch movies. He will watch almost any kind of movie just to experience them. His ideas take inspiration from the shows and movies he watches, and games he plays. He also loves a good pun.
Related Articles: Between Two Castles of Mad King Ludwig, Tabletop
Share
Tweet
Share
Submit